Anthony’s Nose is a peak along the Hudson River at the north end of Westchester County, New York. Together with Dunderberg Mountain, it comprises the South Gate of the Hudson Highlands. The 910 ft. peak has been known as Anthony’s Nose since at least 1697, when the name appears on a grant patent. Pierre Van Cortlandt, who owned this mountain, said it was named for a pre-Revolutionary War sea captain, Anthony Hogan. This captain was reputed to have a Cyrano de Bergerac type nose.

Anthony’s Nose as viewed from The Torne

Anthony’s Nose is one of the more popular hikes in the Hudson Valley and on weekends the cars are lined up along Route 9D as a testament to its popularity. I visited Anthony’s Nose recently, on my birthday, via the Camp Smith Trail. Being that it was July 4th, I wanted to do a hike that leads to an American Flag. Sadly, there aren’t that many options in the area. I had raised a bright new flag on the summit of Hook Mountain on July 4, 2017. Unfortunately the flag that I placed there was taken down by unknown person(s). I wanted to keep the hike somewhat local due to holiday traffic and my choices were whittled down to Anthony’s Nose or The Torne. Having just done The Torne on Memorial Day weekend, I decided on Anthony’s Nose. There are several different routes one can take to the scenic view where the flag flies proudly. I wanted to check out a route that isn’t as well known and do some exploring as well.

We arrived at the Trailhead shortly before 8:30 am and there was one car in the lot. While we were gearing up, two cars pulled up and quickly got out and hit the trail. We gave them a head start so we wouldn’t be on their heels and then began our hike. We took a short footpath at the western end of the lot to the white-blazed Appalachian Trail, which crosses South Mountain Pass Road here. We walked a short distance to the AT and turned left onto a woods road and passed a locked gate.

This woods road, also the route of the AT, is labeled on maps as Military Road.

The road ascends gently and in about 300 yards from the gate, the AT leaves to the right as it descends slightly. We continued straight to stay on Military Road.

In about 0.4 mile, Military Road reaches a fork where we veered right. 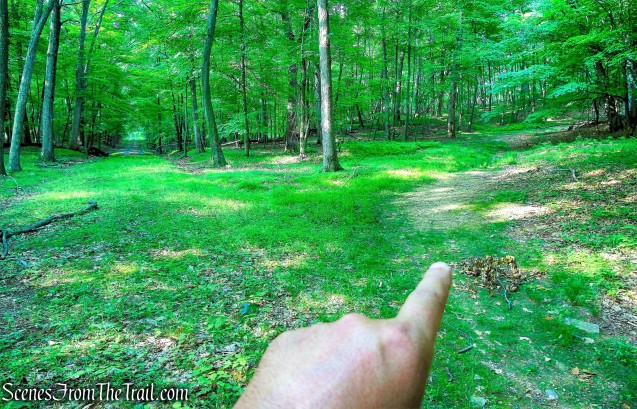 To the left is a locked gate where the road continues into Camp Smith.

We continued following the road to the right, skirting the northern boundary of Camp Smith.

The road curves to the west as it levels off.

There is a sign to the right of the road. I believe the TA stands for “Training Area.” It is not shown on Camp Smith’s Training Area Map, so I’m not sure if it’s old or new. 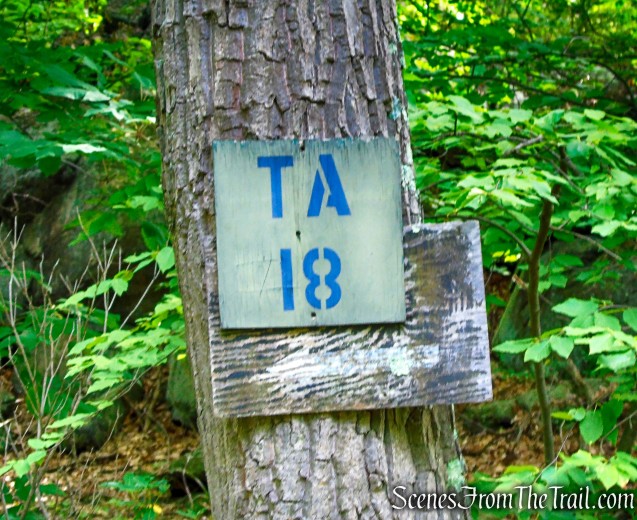 The trail continues west, with the Hudson River visible through the trees. The road then turns left and joins the Appalachian Trail, which comes in from the right. The AT begins a steep descent here. 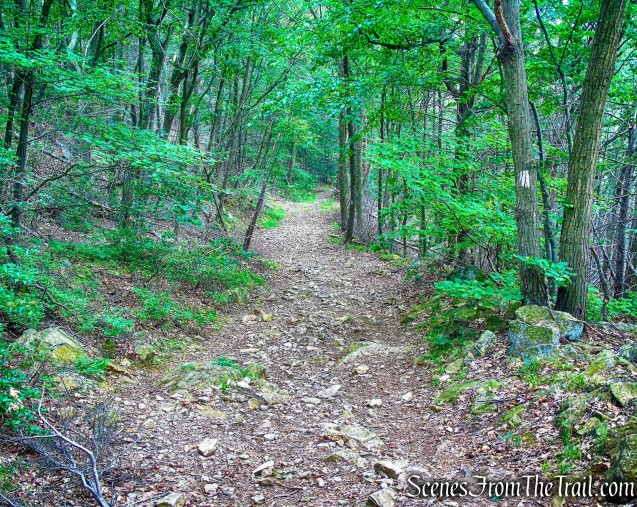 In a short distance, the AT turns right and leaves the road, descending steeply towards Route 9D. We stayed to the left, to remain on the woods road. 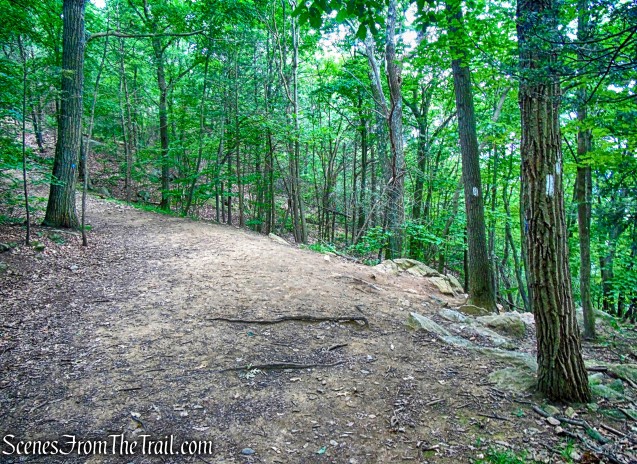 continue straight on the woods road

We now began following the blue-blazed Camp Smith Trail, which ascends steadily on a moderate grade. 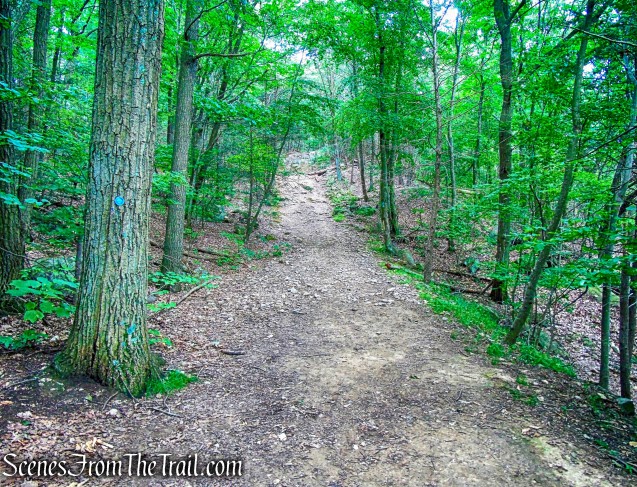 Even though it was still early, we passed several hikers going in the opposite direction. 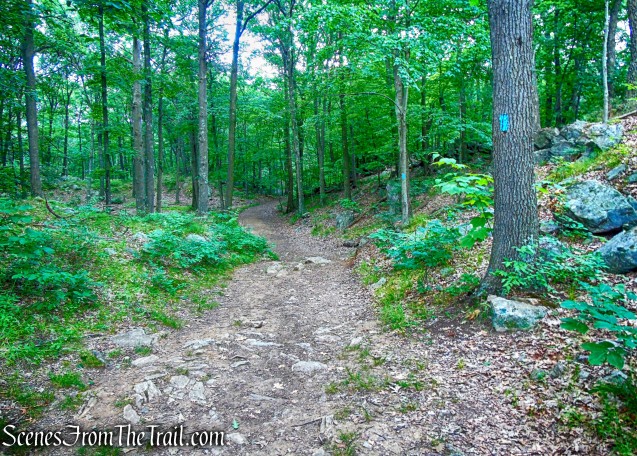 It was already getting hot and a little humid, but the entire hike thus far on the woods road, had been shaded.

In approximately 1/2 mile from the junction with the AT, the Camp Smith Trail turns left, and leaves the woods road. We turned right and walked a short distance to the large rock outcrop that is  Anthony’s Nose.

Looking southwest, Iona Island and the Hudson River is visible below. Just beyond, starting from the left of center, is Dunderberg and Bald Mountains, The Timp is to the left of the notch and West Mountain to the right. The notch is Timp Pass.

One of the finest views in Westchester County. It is such a popular spot on nice days, that it is hard to find solitude up here, but worthy of a visit nonetheless. 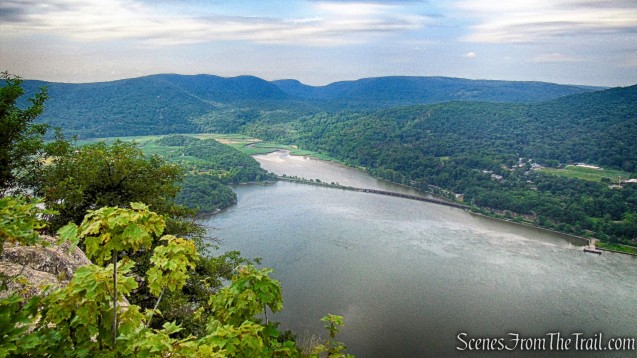 No wind at the summit, kept the air warm, but the clouds blocked the sun, at least for the time being.

Across the river, a bronze sculpture of an Elk’s Head, can be seen on a rock outcrop.

Directly across the river is Bear Mountain with Hessian Lake at its base. 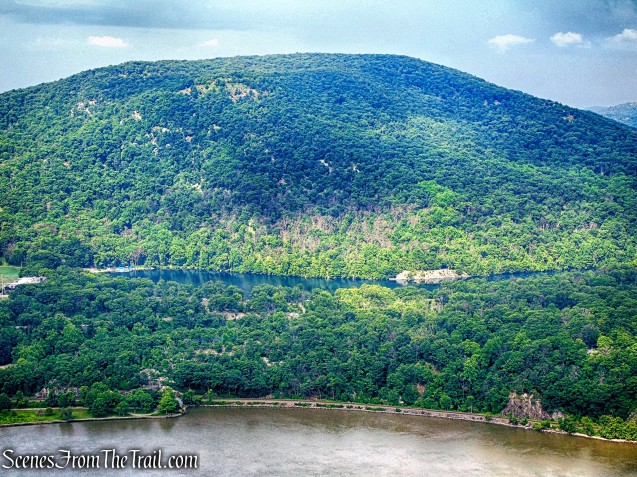 The blueberries were just starting to ripen. 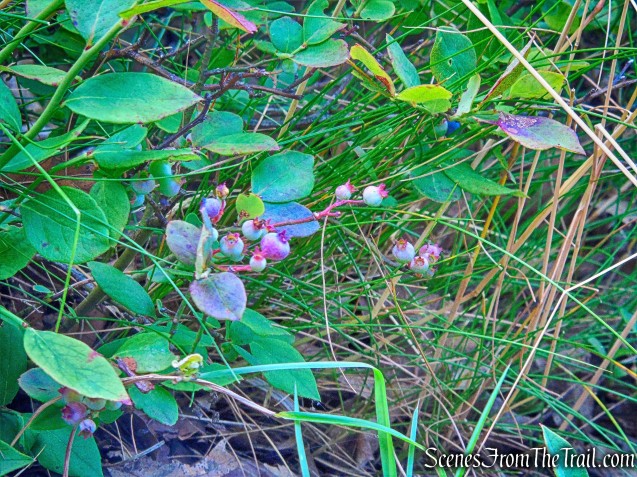 Happy Birthday America! We stayed at Anthony’s Nose for quite some time enjoying the view as well as a snack. What better way to celebrate America’s birthday than at this spot right here? 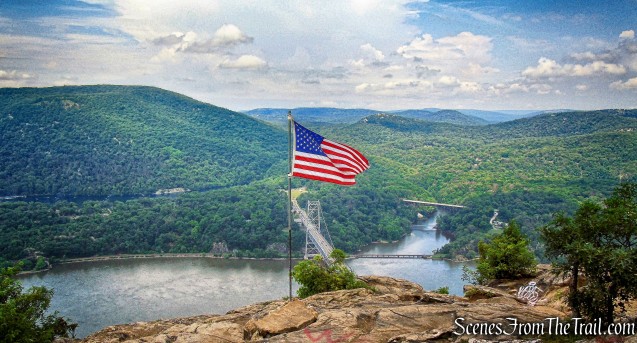 The whole time we were there, people came and went. Then it was our turn. We walked back out to the Camp Smith Trail and turned left.

We headed northeast on the Camp Smith Trail as it descends. 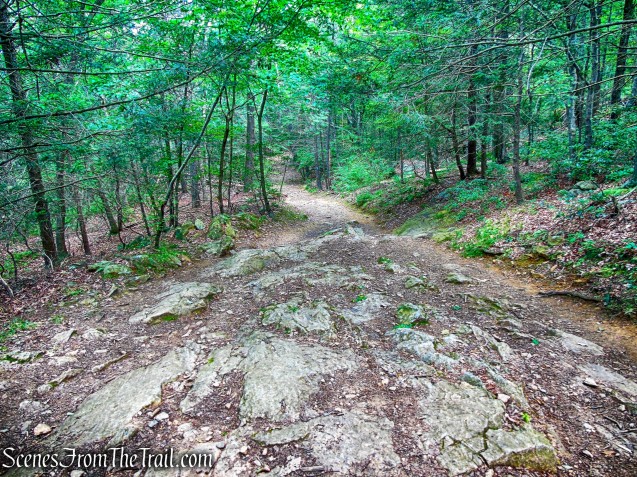 In a 1/2 mile, the Camp Smith Trail ends at the junction with the Appalachian Trail. We stayed on the woods road as the AT ascends steeply.

At the top of the rise, the AT continues straight and leaves the woods road, but we turned right to continue on Military Road. The trail curves southeast then curves northeast as it begins to descend. 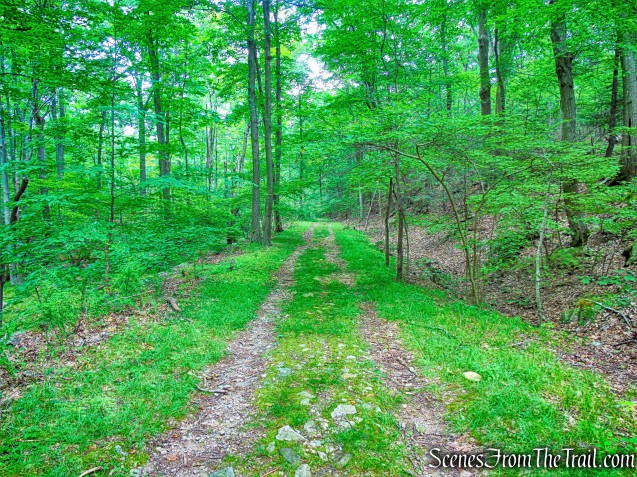 Please note: If you would like to skip the bushwacking section of the hike, continue on Military Road a short distance back to the parking area, where the hike began.

When we reached the primitive campsite that we passed early, on the hike. We began bushwacking east up the hill towards Mine Mountain. We were now looking for Philips Mine and its workings, that sit just up the hill. It wasn’t an easy bushwack and there was no clear path, After about 400 yards of zig-zagging through the heavy brush, we arrived at a tailings pile on the slope of the hill.

tailings near Philips Mine

As we walked around this area, there was evidence of mining operations throughout. The Philips Mine is on the northwestern flank of Mine Mountain. It was first operated for iron ore. It is unclear when the mine was first opened.

mining remnant near Philips Mine

Standing on the rusty tailings, looking north towards Canada Hill. We walked around looking for any one of the several mine openings. I was under the assumption that the tailings would be near the adit.

We walked on Coppermine Road as it heads northeast……

and then loops around to the southwest.

old mining road near Philips Mine

We walked off the trail, being careful where we stepped. An old metal railing lays in the woods. 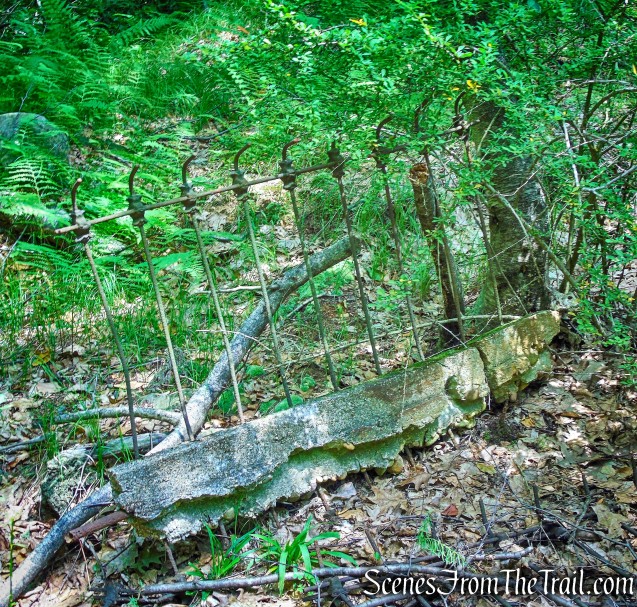 metal railing near Philips Mine

After looking around for a little while, we were sweating bullets as there is not much tree cover in this open area. I was told by someone to be careful up here because there are vent shafts that may be covered with vegetation that are not visible. Someone else told me that there are rattlesnake dens up here as well. We were a little tired and dripping in sweat and decided to call off our hunt for the mine. When I did some post hike research, it turns out that we came within 100 feet of the main opening. The route up to it, which I stood right in front of, is a steep uphill and was heavily overgrown on our visit. I plan on going back near the end of the year before it snows and explore this area again.

Not wanting to bushwack back down the hill, we opted to walk northeast on Coppermine Road. 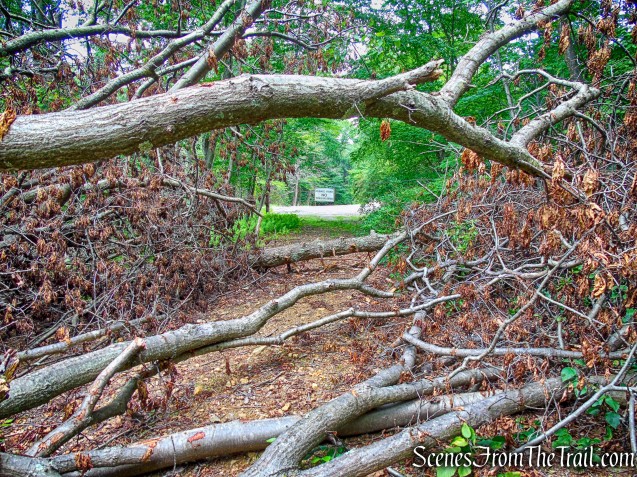 Once the original entrance road to Philips Mine, Coppermine Road is now a private road with a sign that reads: “No Trespassing.” 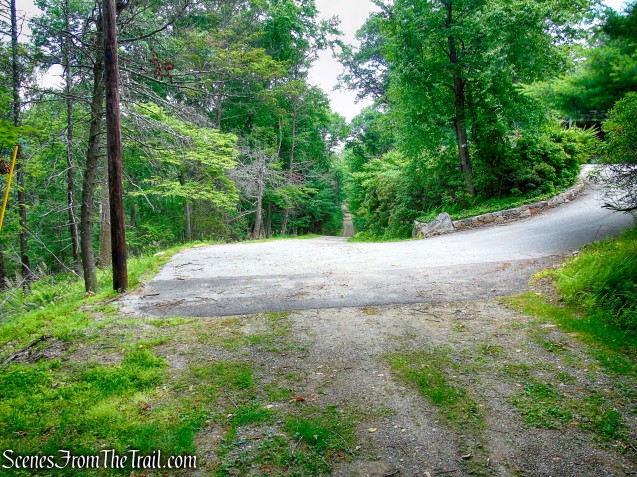 We walked downhill on Coppermine Road to the intersection with South Mountain Pass Road. 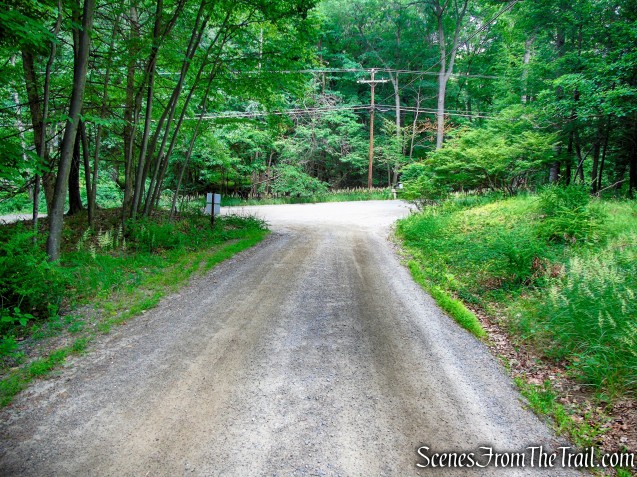 We walked southwest on South Mountain Pass Road for approximately 550 yards until we reached the parking area, where the hike began.

A nice 4th of July hike with a little exploring thrown in. I was a little disappointed that we didn’t find the mine, but I know that I will return soon and resume the search. The route that we took to Anthony’s Nose, is possibly the easiest way to go. It’s not as steep as the other available routes, but slightly longer. I can see why the place attracts crowds, it’s an amazing spot with great Hudson Valley views. I hope that you enjoyed the hike. Tell me what you think and don’t forget to follow my blog.

Cons: I didn’t find the mine, does get crowded. 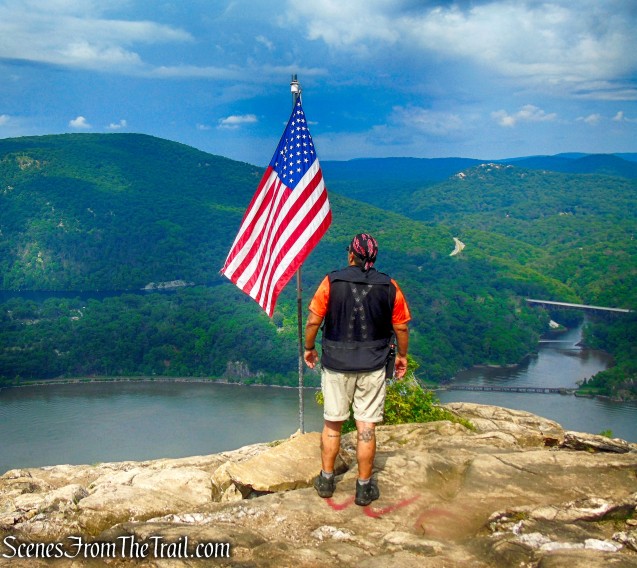