The Camp Smith Trail is approximately 3.7 miles long and extends from the Historic Toll House (Visitor Center) on Route 6-202 to the Appalachian Trail (AT) on Anthony’s Nose. As described by the New York-New Jersey Trail Conference: “Without a doubt, the most rugged trail in Westchester County is the Camp Smith Trail, which rewards a hiker with many panoramic views along its route.” Camp Smith (military reservation) is about 50 feet to the right of the trail in most places on the way to Anthony’s Nose. It is heavily used by the military and may include live gunfire. Many places to the left of the trail, there are steep cliffs that drop down to Bear Mountain Road.

Anthony’s Nose is a peak along the Hudson River at the north end of Westchester County, New York. Together with Dunderberg Mountain, it comprises the South Gate of the Hudson Highlands. The 910 ft. peak has been known as Anthony’s Nose since at least 1697, when the name appears on a grant patent. Pierre Van Cortlandt, who owned this mountain, said it was named for a pre-Revolutionary War sea captain, Anthony Hogan. This captain was reputed to have a Cyrano de Bergerac type nose.

Anthony’s Nose from the overlook – Trailside Museums and Zoo

Anthony’s Nose is one of the more popular hikes in the Hudson Valley and on weekends the cars are lined up along Route 9D as a testament to its popularity. I have wanted to do this hike for quite some time, but I consider this a weekday hike in order to minimize the crowds. With that being said, I chose this as my birthday hike. Having lived in Westchester County for most of my life, it was fitting that I hike the Camp Smith Trail. My intention was to hike it from the Historic Toll House to Anthony’s Nose and back. A tall order for an old guy like me, but I was going to give it a shot. Another option was hiking it in its entirety and descending on the Appalachian Trail to 9D after stopping at Anthony’s Nose. As it turned out we ended up doing the second option.

Since I was feeling optimistic, we only used one car. This hike is better done with a car parked at each end. We parked at the historic Bear Mountain Bridge Toll House, 0.7 mile north of the entrance to Camp Smith on Bear Mountain Road, Route 6/202. The Toll House currently serves as the trailhead for the Camp Smith Trail.

Since there was rain in the forecast for the afternoon, we decided to get an early jump and arrived at approximately 8:15 am. It was in the high 30’s and windy when we began the hike and rose to the mid 40’s throughout the day. The blue-blazed Camp Smith Trail starts behind the historic Bear Mountain Bridge Toll House.

The triple blazes, which signify the start of the trail, are visible on a tree just past the brown shed on the right. We would be following the blue blazes until its terminus at the Appalachian Trail.

At first, the trail parallels the road, climbing steadily.

There are numerous signs alongside the trail, which borders Camp Smith. Camp Smith is a military installation of the New York Army National Guard and consists of 1,900 acres.

The trail travels past large boulders and rock formations as it ascends Manitou Mountain.

It drops steeply through a rock field and turns left before reaching a massive cliff.

Staying within sight and sound of the road, it works its way gradually uphill, crossing small ridges. 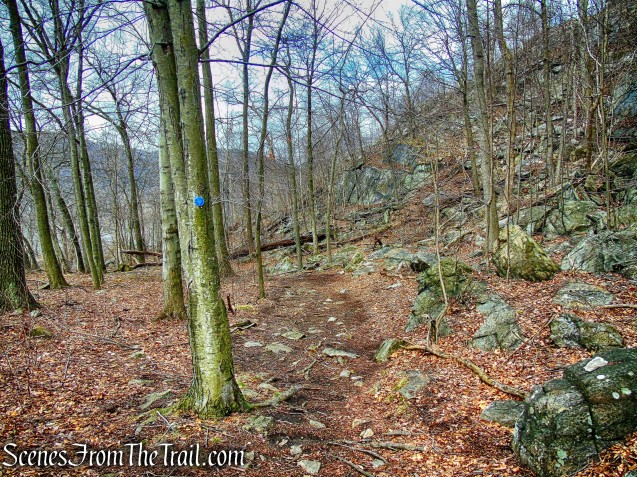 At 0.6 mile, it begins a serious ascent of Manitou Mountain.

It then soon climbs very steeply on a series of rock steps.

The trail continues to climb over jumbled rocks.

It turns left to reach a viewpoint to the south. 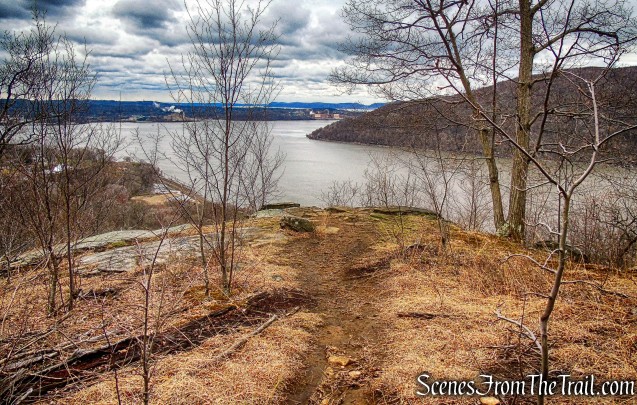 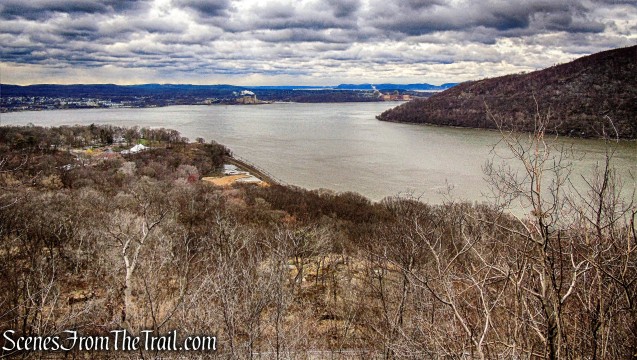 Turning right, it crosses the top of an open rock face. 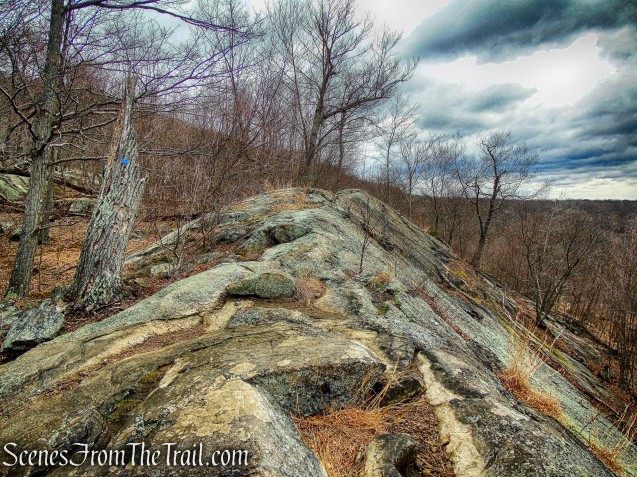 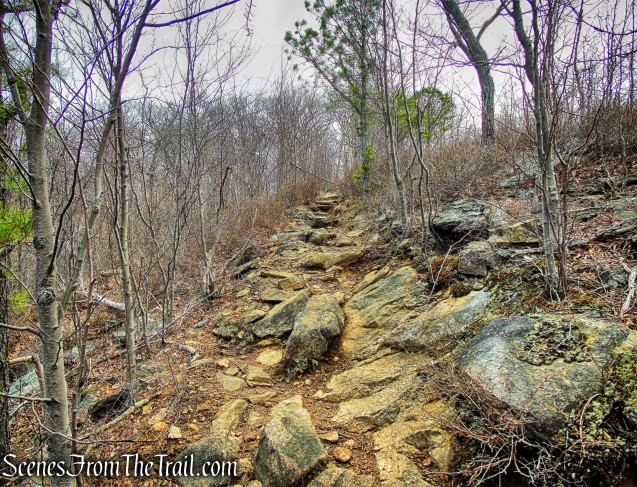 It passes through a gully as it approaches viewpoints on the brow of the mountain. At 0.9 mile, we stopped for a few minutes to enjoy the view of Iona Island with West Mountain in the background. In 1899, Iona Island was bought by the U.S. Navy for use as a naval ammunition depot, becoming one of the largest ammunition facilities in the nation, at that time. The depot supplied much of the munitions for both World War I and II, and remained in service until 1947. 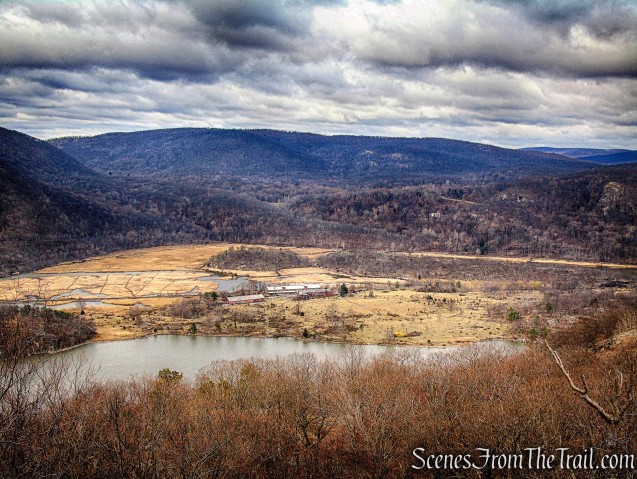 The island was bought by the Palisades Interstate Park Commission in 1965. In 1974 it was named a National Natural Landmark by the National Park Service. As an active wildlife sanctuary, Iona Island is currently closed to the public.

Approximately five of the original 164 arsenal buildings remain, which the park now uses for storage.

The trail turns away from the river and then left again toward a rock outcropping with views. To the north, Bear Mountain is visible on the left and Anthony’s Nose on the right, with the Bear Mountain Bridge in the center.

The Camp Smith Trail then turns right and away from the views to begin its descent. The rock steps, switchbacks, and sidehill construction make it possible to safely descend the extremely steep talus slope. At the base of the descent I took quite a tumble. I rolled my ankle and smashed my shin on a rock. For a few seconds I thought that my hike was done. I cleaned off the wound, applied a bandage and hobbled off to continue the hike.

At 1.2 miles, the Camp Smith Trail reaches the bottom of the slope, crosses a flat area, turns gradually left, and arrives at a small rock outcropping with a view. From the viewpoint, the trail leads inland and then turns once again towards the river for another view to the west. Leaving the view, the trail continues the gradual descent, crossing intermittent brooks. 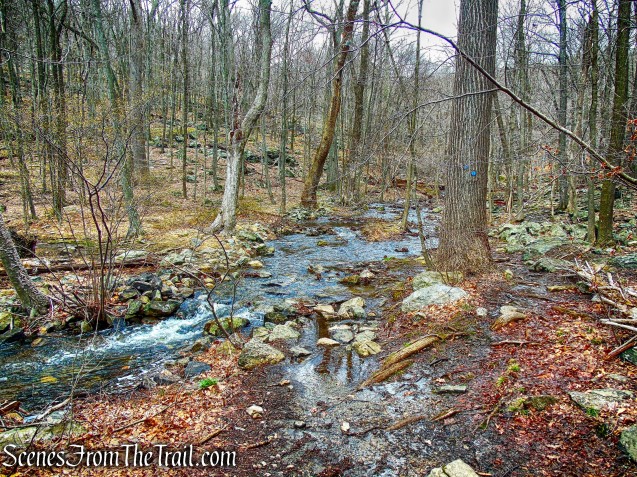 After turning away from the road, it joins and leaves woods roads and crosses streams. 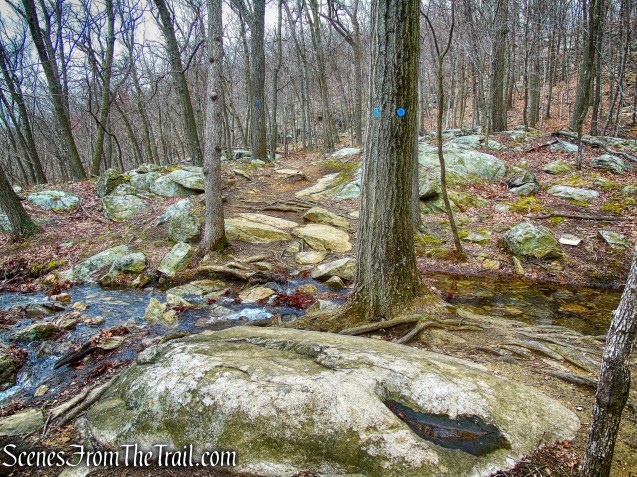 Rising out of a ravine, the trail turns right at 2.4 miles, onto a rock outcropping with views of the Hudson River, Iona Island, and Bear Mountain-Harriman State Park. 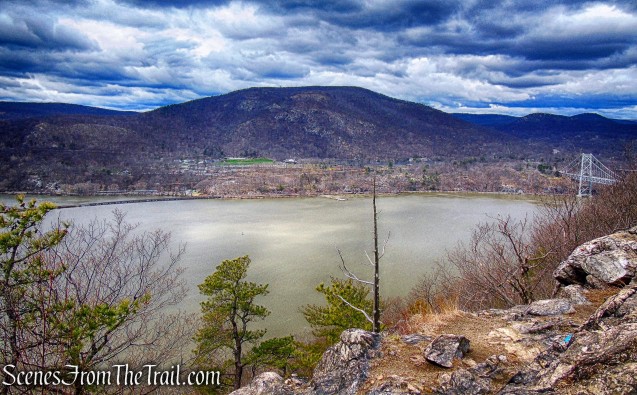 Paralleling the river high over the road, the trail first drops slightly then begins to climb steeply. 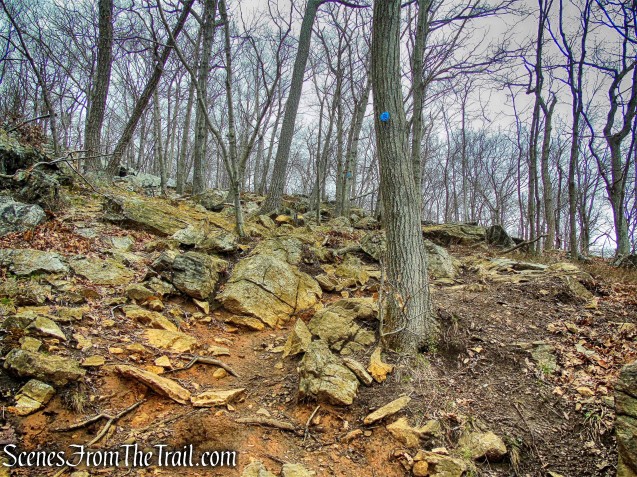 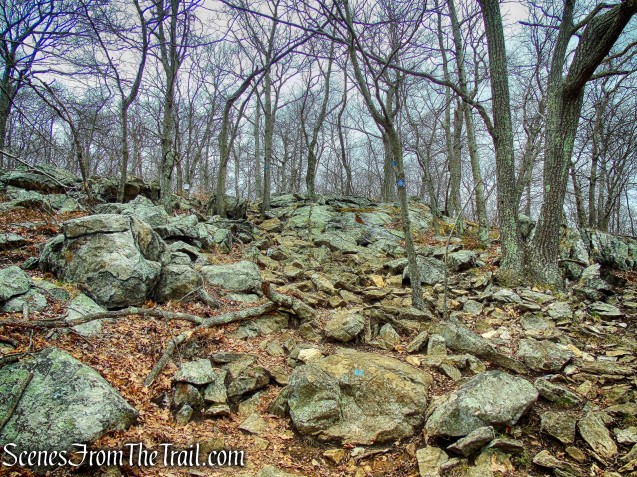 At 2.7 miles, another rock outcropping with a view offers an excuse to stop before tackling the remaining unrelenting assault up Anthony’s Nose. 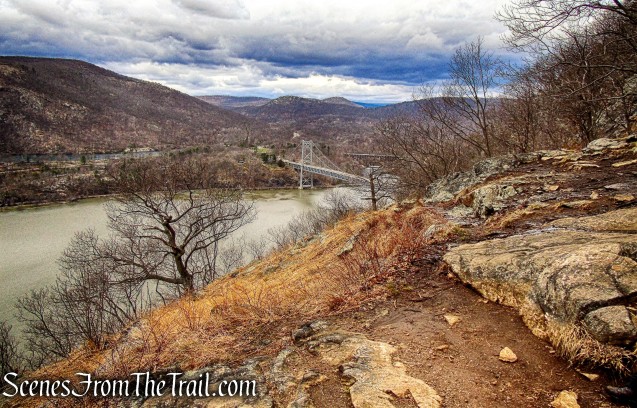 Along the last 0.4 mile, there are both seasonal and year-round views from open rock slabs. 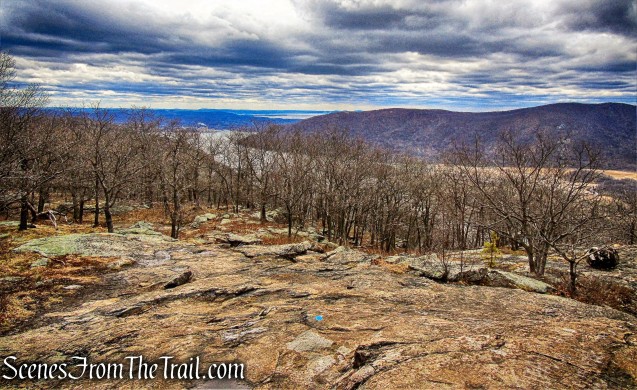 turning around and looking south from the Camp Smith Trail

The trail drops down off the summit to join a woods road. Following it straight ahead leads to Anthony’s Nose and panoramic views of the Hudson River, Bear Mountain-Harriman State Park, Hessian Lake and the Bear Mountain Bridge. 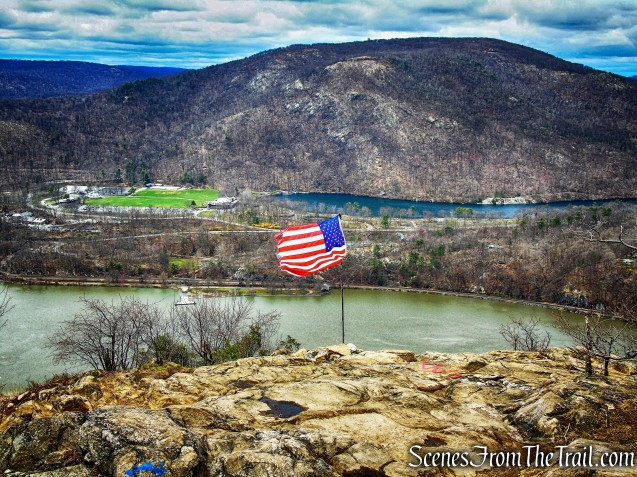 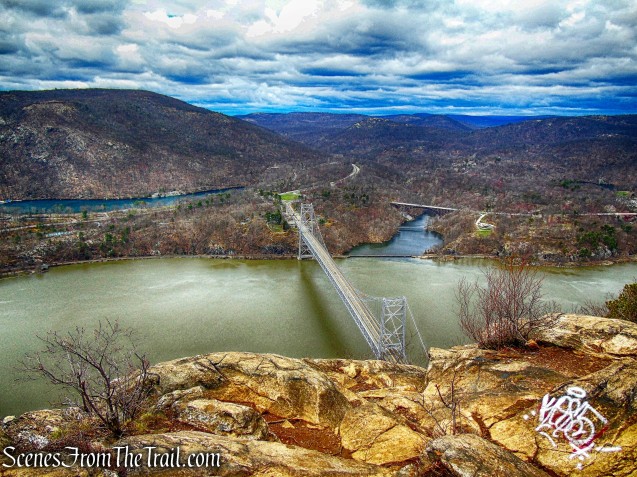 Looking southwest, a view of Iona Island from Anthony’s Nose.

We stopped here for a while, but it was very windy so we took refuge away from the views. There was not a single soul in sight as we sat there and that was just fine by me. At this point my ankle was swollen and my shin was throbbing from the spill I took earlier. Not having another car parked nearby was a dilemma. I didn’t have it in me to retrace my steps back the way we came so it was either a dangerous road walk back to the car along Route 6/202 or call for a ride. Luckily, we called a friend who happened to be driving nearby and he agreed to pick us up at the trailhead on Route 9D. We then followed the blue blazes, which travels on a woods road, to the Appalachian Trail, where the Camp Smith Trail ends at 3.7 miles.

We then followed the white blazes to the left where the AT descends steeply for 0.6 mile to Route 9D. We then met up with our ride and he dropped us off back at the Toll House.