Please Note: Due to recent rail corridor crossing closures in Schunemunk State Park the hike described below is no longer possible. The Metropolitan Transportation Authority (MTA) forbids crossing its rail corridor in Schunemunk State Park. Trespassers may be fined or subject to arrest by MTA police. There are currently no trail connections within the park between the east and west sides of the tracks.

These closures are due to an increase in trespassing at the Moodna Viaduct Trestle. Anyone crossing the railroad tracks will be ticketed by MTA Police, who are actively monitoring the area. A solution for re-opening access is being sought but it will take some time.

Please utilize the Otterkill Road parking lot to access the west side of the park.

Schunemunk (pronounced “skun-uh-munk”) means “excellent fireplace” in the Algonquin tongue of the Leni Lenape tribe that originally inhabited the area. Schunemunk Mountain is the highest point in Orange County. An interesting feature of the mountain is its double crest. For nearly three miles, there are two ridges running parallel to each other. During the American Revolution, the mountain was often the site of skirmishing between Tory and Patriot irregulars.

The Megaliths is the most popular hike on the mountain, so of course I had to check it out. I hiked the southern end of Schunemunk Mountain a year earlier and was ready to come back for some more. We tried to get an early start to beat the crowds on a Saturday morning, but I overslept. We arrived at the trailhead shortly before 9:00 am and there were a lot of cars already there. Turns out that there were several “Meetups” hiking there on the same day. The Chinese Mountain Club also had an outing there and had arrived shortly before us and were getting ready to hit the trail. They had a contingent of about twenty that were gearing up as we pulled in. We hurriedly got ourselves together, wanting to put some distance between us and the group. A large group like that spread out on a narrow trail would cause a logjam. Anyway, we began our hike on on the joint Jessup (yellow), Sweet Clover (white) and Highlands (teal diamond) Trails, which is directly across the street from the kiosk. 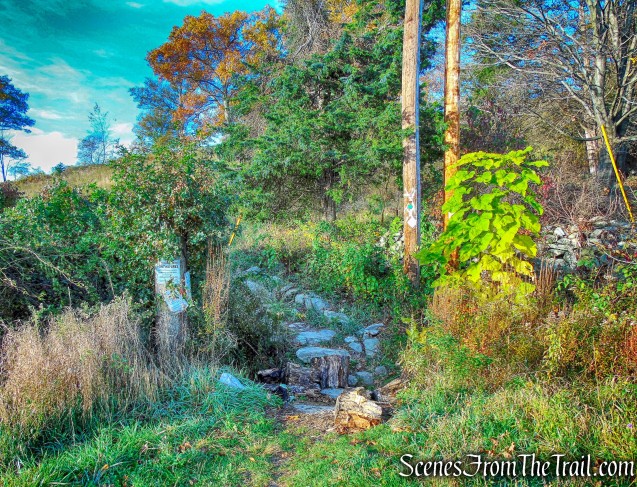 Although the three trails run together at the start, for the first 2.2 miles, we would only concern ourselves with the white-blazed Sweet Clover Trail. The trail starts off climbing a grassy hill.

Upon reaching the crest of the hill, the trail heads northwest through a field with Schunemunk Mountain on the right. 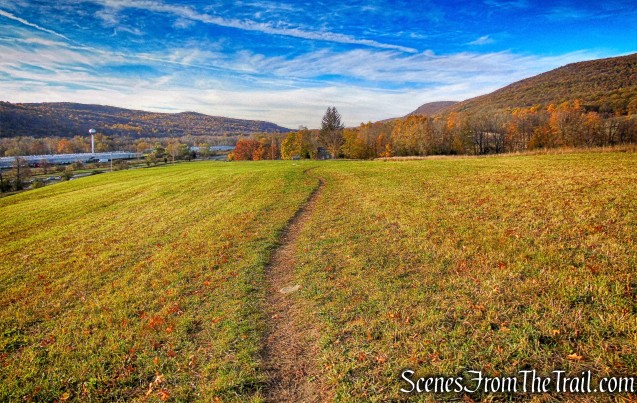 When the trails split, we went left to remain on the white-blazed Sweet Clover Trail.

The trail continues on a grassy road through a field, with a lone tree in the middle of it.

At the end of the field, the Sweet Clover Trail enters the woods, turns right and passes some old stone walls. We followed the white blazes on an old woods road as it climbs gently.

The trail climbs and crosses railroad tracks. This is an active rail line, so we looked and listened for approaching trains before crossing.

Cross the tracks on the Sweet Clover Trail

On the opposite side of the tracks, the trail briefly turns left, then immediately turns right and begins a steady climb of the mountain. 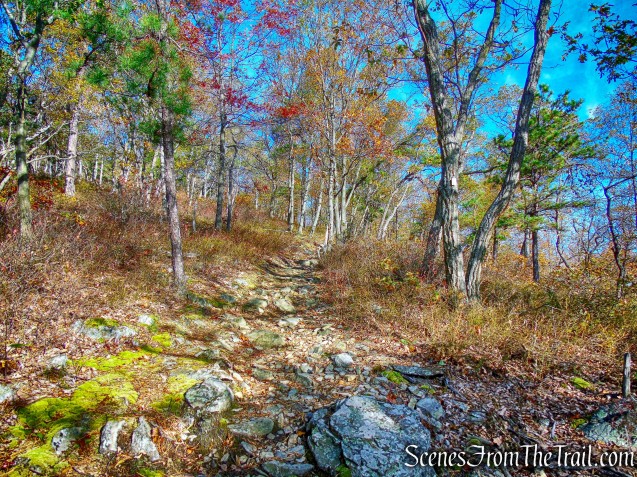 After a while, the trail levels off and emerges at the edge of a ravine, with views to the east. It then bears right and climbs more steeply, passing several viewpoints along the way. We were racing up the hill in order to beat the large group of hikers to the Megaliths. After approximately 2.2 miles, we reached Sweet Clover Junction. The sign faces the opposite direction if approaching from the east, but is visible if you are looking for it. We had now gained about 1200 feet of elevation.

We then began following the yellow-blazed Jessup Trail as it runs along the eastern ridge (also the route of the teal-diamond-blazed Highlands Trail).

The ridge is formed of conglomerate rock, sometimes called puddingstone, studded with pebbles of white quartz and pink sandstone. The trees grow out of cracks in the rock.

Along the way, there are several nice east-facing viewpoints. Visible to the right are the East Hudson Highlands. North and South Beacon Mountains can be identified by the towers on their summits and Breakneck Ridge by its bald western face. 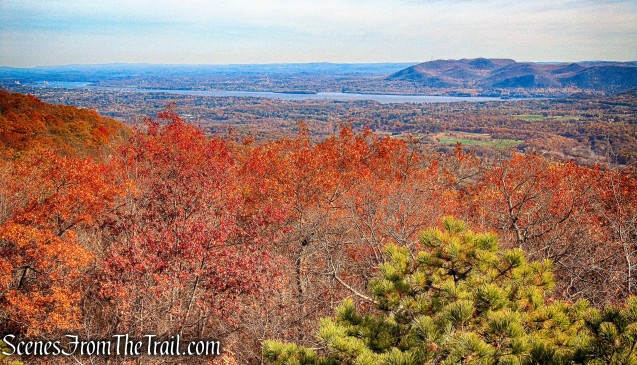 Along the Jessup Trail, there are rock cairns that serve as a guide to keep you on the trail. The cairns appear more frequently as we approached the Megaliths. I had viewed images online of “Megaliths” with an arrow, written in white paint, pointing the way. I did not see that or any white blazes, but the cairns steered us in the right direction.

The only white blaze that I saw was on a tree just feet from the Megaliths, but I did see the white blazes on my way back. Nevertheless, it’s a short walk from the Jessup Trail and the cairns lead the way.

We arrived at the Megaliths and much to my dismay, the group of hikers that I was trying to beat to the top, was already there. Not only were they already there, but they were finishing up their lunch. I was a bit bewildered because we practically ran up the mountain and basically wore ourselves out for naught. It was a semi-comical moment and we just had to laugh. We plopped ourselves down and enjoyed the view.

The Megaliths are a group of massive blocks that have broken off from the bedrock. It is a point of interest on this hike so don’t expect solitude if you visit on the weekend. 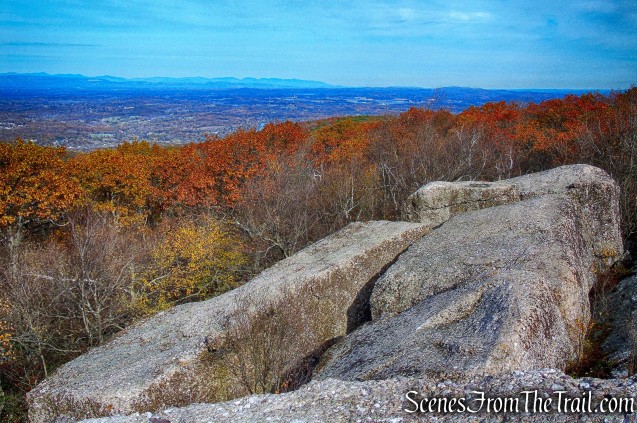 From this western facing viewpoint, the Shawangunks and the Catskill Mountains are visible. A very cool spot to have lunch and relax for a while. We lucked out while we were here. Everyone left and we had the place to ourselves for a few minutes until we were joined by several large groups of hikers. 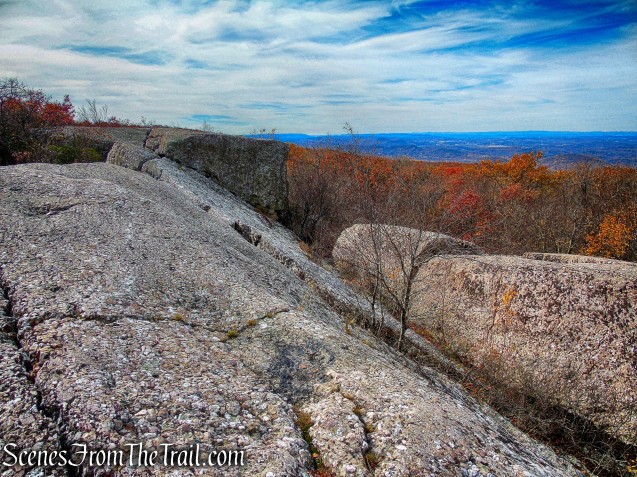 The summit is nearby and since we climbed this far, we decided to visit the the highest point in Orange County. Retracing our steps on the white-blazed Megaliths Trail, then turned right on the Jessup Trail and walked a short distance to the summit. The summit of Schunemunk Mountain is marked with white paint, “1664.”

There isn’t much of a view from the summit, but it is worth visiting. 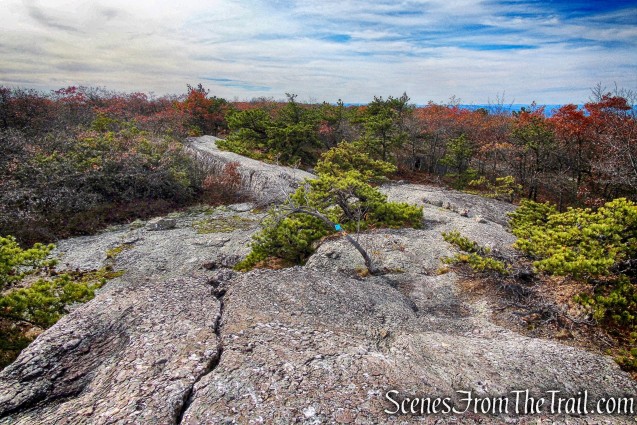 We then retraced our steps along the Jessup Trail, heading northeast until we came to a junction with the Dark Hollow Trail and turned right.

We followed the black-on-white blazes as it begins a gradual descent of the mountain.

The descent steepens and passes a cave to the right of the trail.

The trail curves to the right and passes a rock ledge. We ventured up to the top of the ledge and were rewarded with another great east facing viewpoint.

After another steep stretch, we crossed a brook and soon the trail joins a woods road, which it follows for most of the remainder of the way down. 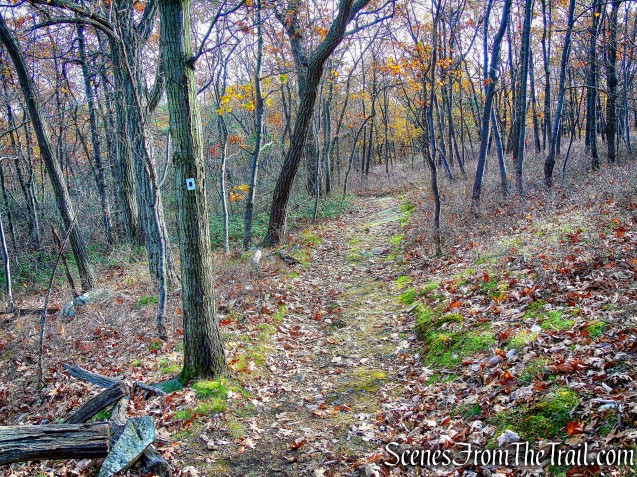 The Dark Hollow Trail ends at the base of the descent by the railroad tracks. We crossed the tracks and followed the white-blazed Sweet Clover Trail back to the parking area where our hike began.

This was a tough hike, but I thoroughly enjoyed it. There were views galore and the trails kept me on my toes. There are different approaches to the summit and I hope to get back there soon and give them a try.

Take the virtual hike below, with additional images added.

Cons: Popular hike and gets a little crowded on weekends. 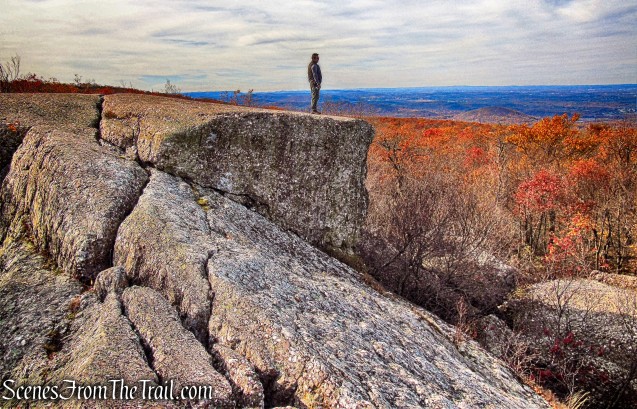