Located in Garrison, New York, approximately one hour north of New York City, Manitoga is the House, Studio and 75-acre woodland garden of American industrial designer Russel Wright (1904-1976). Manitoga is a National Historic Landmark, an Affiliate Site of the National Trust for Historic Preservation, and one of the few 20th century modern homes with original landscape open to the public.

Over 70 years ago, Russel and Mary Wright acquired an abandoned quarry and surrounding hillside in the Lower Hudson Valley, and he slowly restored this land to a place of extraordinary beauty. Inspired by the legacy of the Wappinger people, the ancestral residents of the area, Wright called the emerging vision for these 75 acres “Manitoga” or Place of Great Spirit. 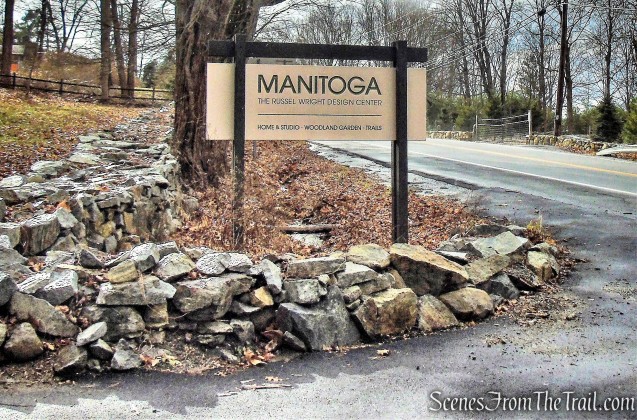 The trails offer opportunities for moderate loop hikes of varying distances on the west facing slopes as well as access to extended hiking on the Osborn Loop Trail and Appalachian Trail in the adjacent Hudson Highlands State Park. In the summer there are pocket views of the Hudson River. These are called “osios” at Manitoga, from the language of the Iroquois.

Three trail loops, named for an historic trail segment, story, or event unique to that loop are marked with blue, red, or white markers.

The trails are co-aligned, following a single path from the start, with the Wickopee Trail Loop (Red) first peeling off to a short inner loop; then the White Pine Trail Loop (White): and finally, the Lost Pond Trail Loop (Blue) extending up the hill to an elevation of 650’ (400’ above the start). Loops reunite at Four Corners and are co-aligned for the descent to the meadow origin.

In keeping with Wright’s original plan, all his trails were designed to be hiked in one direction; trail blazes reinforce that intention by being single colored in one direction, and the same color but with a black dot in the reverse direction. 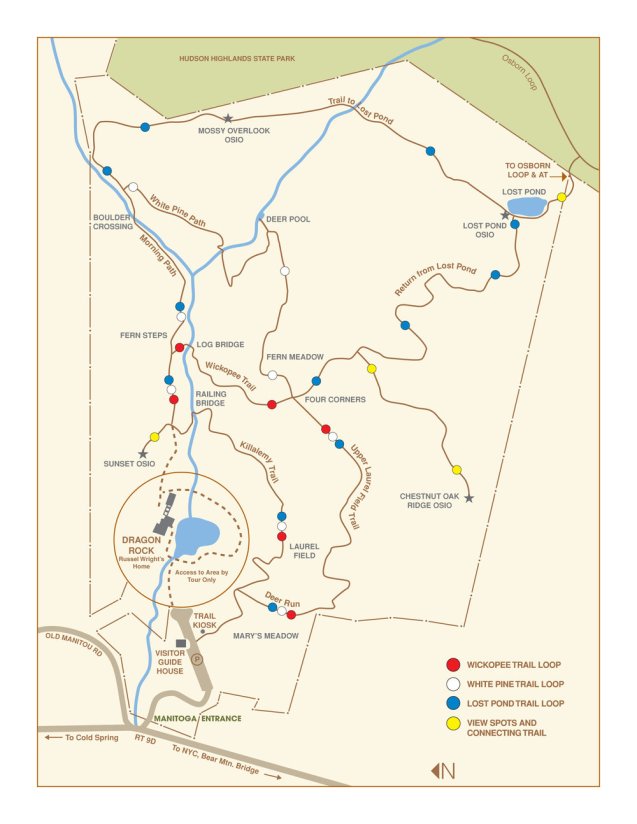 The three main trails on the property, which are are laid out ladder-like up the hill toward Lost Pond, are intended to be hiked in a clockwise direction. Although they are also blazed in the other direction, those blazes have a black dot in the middle, indicating that this is not the preferred direction of travel. This hike follows the trails in a clockwise direction, but you will notice blazes with black dots when you retrace your steps on side trails that lead to viewpoints. This hike covers all of the main trails on the property.

After stopping at the Guide House to register, head uphill on a wood-chip road. Turn left at a sign for “TRAILS,” then turn left again at a larger sign. You’ll be following the blue-blazed Lost Pond Trail Loop, but at first, this trail is co-aligned with the red-blazed Wickopee Trail Loop and the white-blazed White Pine Trail Loop. 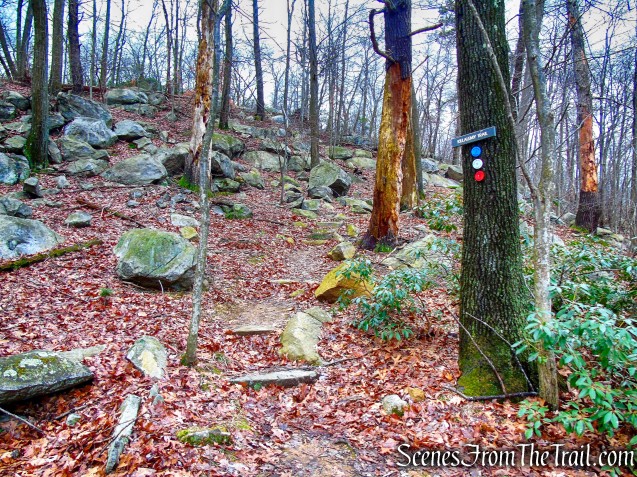 Follow the trail, marked with white, red and blue blazes, as it climbs on stone steps and switchbacks. After passing through mountain laurel thickets, the trail goes between two large boulders and levels off. It then descends a little to cross a wooden bridge over a stream. The trail now turns sharply left to briefly parallel the stream, then curves to the right. 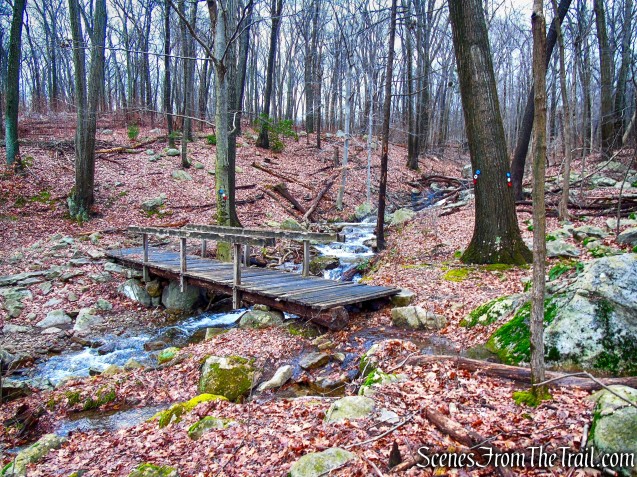 Just beyond, a triple-yellow blaze marks the start of a short side trail that goes off to the left to a viewpoint known as the Sunset Osio. The view from this location is very limited when there are leaves on the trees, but the short side trip is worthwhile, as there are two interesting boulders at the end of the yellow-blazed side trail.

Please note: The sign pictured below is adjacent to the start of the Yellow Trail described above. We took that to mean that the Yellow Trail was off limits, so we skipped it. The sign refers only to the woods road that is behind the sign and not the marked trail. 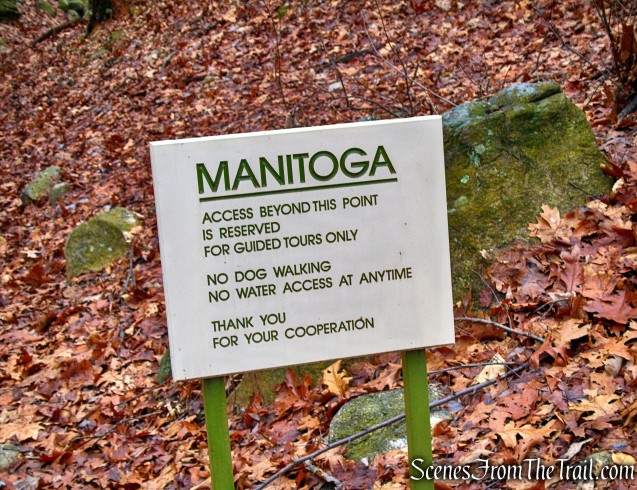 Return to the main trail and turn left. You now head uphill on an old woods road. Soon, the red-blazed Wickopee Trail Loop leaves to the right, but you should continue ahead, now following white and blue blazes.

stay left when Red Trail leaves to the right

A short distance beyond, you’ll cross a stream on rocks opposite a cliff. 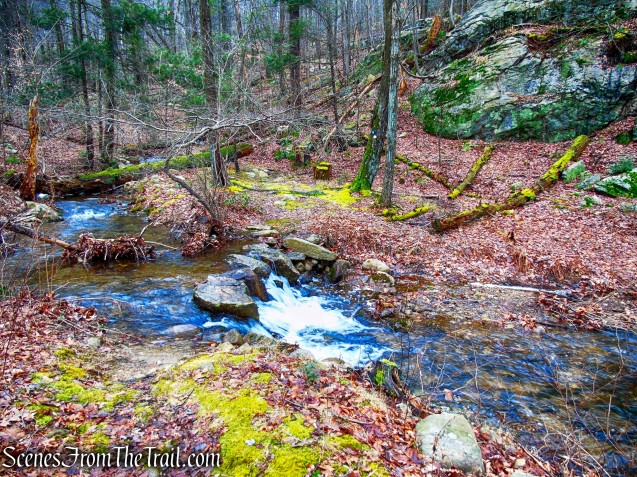 cross a stream on rocks

Next, the white-blazed White Pine Trail Loop goes off to the right. Continue ahead, now following only blue blazes.

white-blazed White Pine Trail Loop goes off to the right

The trail curves to the right and continues to ascend. Along the way, a yellow blaze on the right of the trail marks the Mossy Overlook Osio, a limited viewpoint from which you can see across the Hudson River. 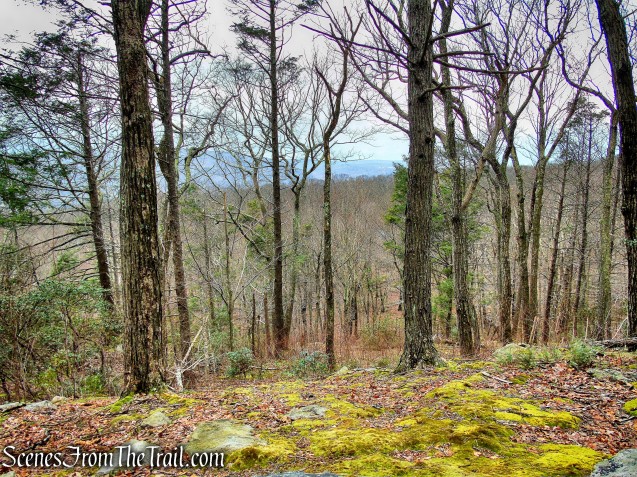 A short distance beyond, you’ll reach a junction where a sign indicates that the Osborn Loop is to the left. Continue ahead on the blue-blazed trail, following the sign for “Lost Pond.” The trail now crosses a stream and continues to ascend.

After passing through dense mountain laurel thickets, you’ll reach Lost Pond. At the southern end of the pond, a yellow blaze on the right marks the Lost Pond Osio, another limited viewpoint over the Hudson River, and a triple-yellow blaze on the left marks the start of a connecting trail that leads to the Osborn Loop. 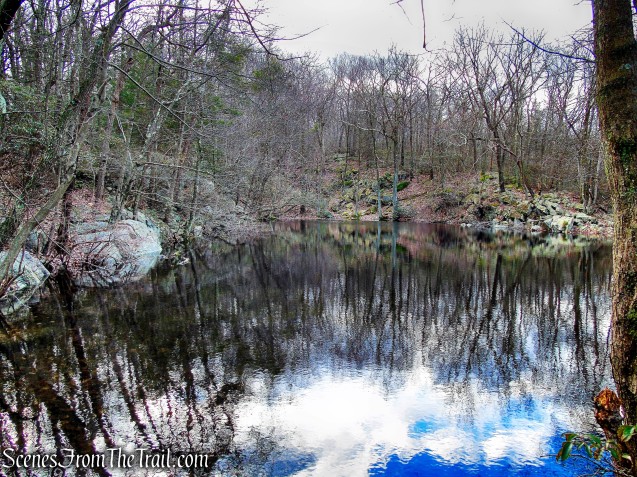 connecting trail that leads to the Osborn Loop

About halfway down, you’ll notice a triple-yellow blaze on the left. Turn left and follow this yellow-blazed side trail to the Chestnut Oak Ridge Osio, a panoramic viewpoint over the Hudson River (the best view is a short distance beyond the triple blaze that marks the official end of this side trail). 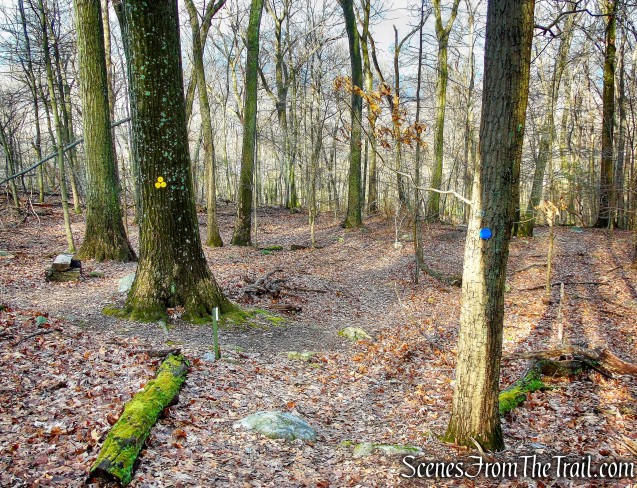 After taking in the view, retrace your steps to the blue-blazed trail, turn left and continue heading downhill.

retrace your steps on yellow-blazed trail

A short distance beyond, you’ll come to the Four Corners, where the blue-blazed Lost Pond Trail Loop turns left and joins the white and red trails.

Proceed ahead on the red-blazed Wickopee Trail, which will be followed with the black dot in the middle. 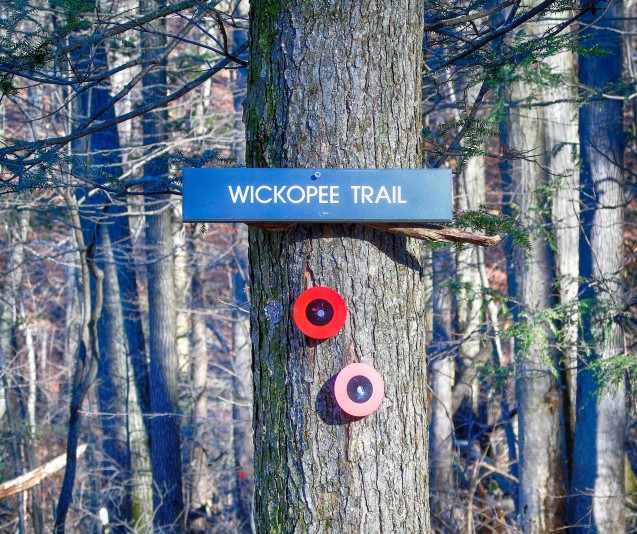 The red blazes head downhill in a westerly direction.

The Wickopee Trail then crosses a stream on a log bridge.

After crossing the stream, turn right, leaving the red-blazed trail and now following the blue and white blazes. In a short distance recross the stream on rocks. This short section between the two stream crossings is a repeat from earlier in the hike. 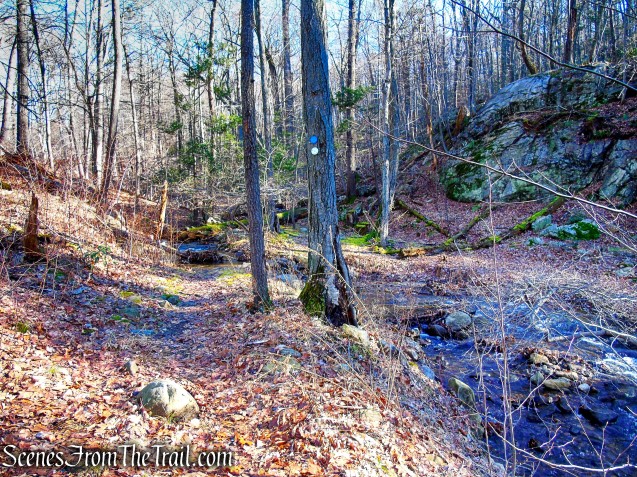 A short distance after crossing the stream, the White Pine Trail leaves to the right. Turn right and follow the white blazes as they lead uphill. 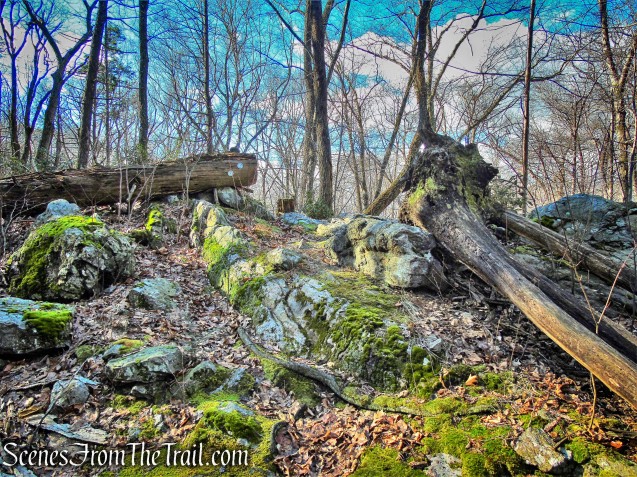 Follow the white blazes along the top of a cliff, over a boulder stream crossing, to Deer Pool and through Fern Meadow. 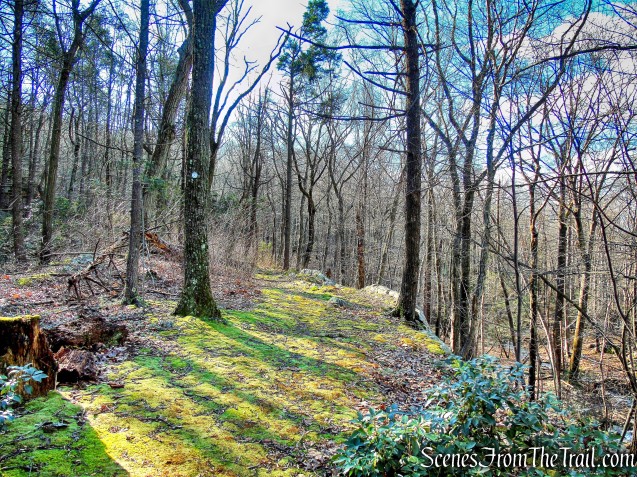 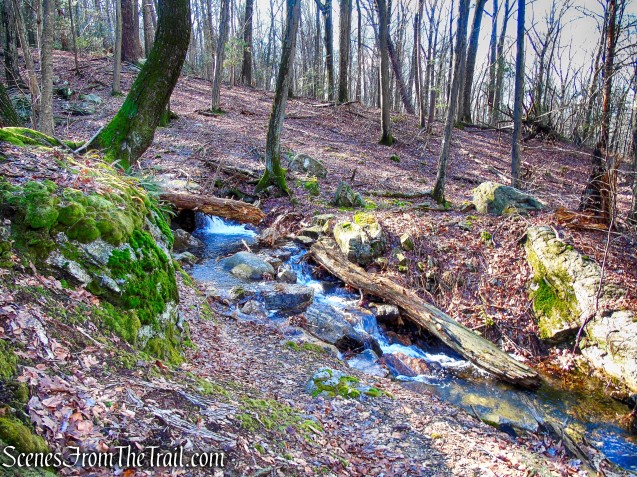 The trail heads downhill, turns right and comes to a T-intersection. Turn left and follow the wood chip path back to the parking area, where the hike began.

This preserve is surprisingly rugged and the trails are well blazed. The property is quite scenic and the numerous stream crossings make for a fun hike. The three loop trails along varied terrain make any number of loop hikes possible for the seasoned hiker or the novice. A nice way to spend a few hours in the Hudson Valley.

Cons: Scenic viewpoints are not impressive, trails get swampy after heavy or prolonged rainfall. 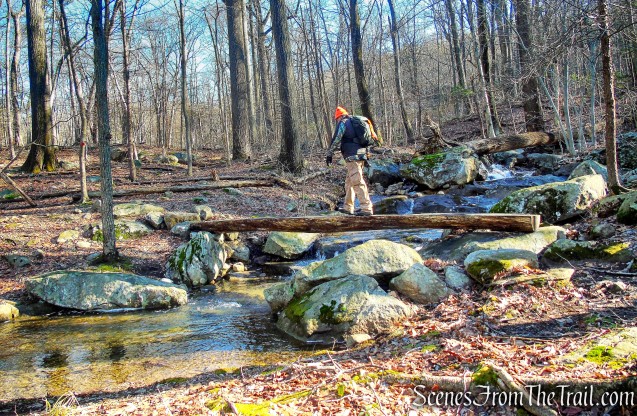