Bull Hill also known as Mount Taurus, is in the village of Cold Spring on the Hudson River in Putnam County in the State of New York. It is part of the mountain range known as the Hudson Highlands. The original name came after a bull that used to terrorize the mountain was chased by indignant inhabitants. A hunting party drove the bull over the hill. In an attempt to flee the mountaineers, the bull plunged out into space and fell down. Its broken and shapeless mass on the rocks was memorialized in the name of the mountain the bull used to haunt. Bull Hill has an extensive trail system and offers hikers sweeping views of the river and neighboring peaks from rock outcrops near its wooded 1,421-foot summit. Don’t let the name fool you. This is a mountain, not a hill. 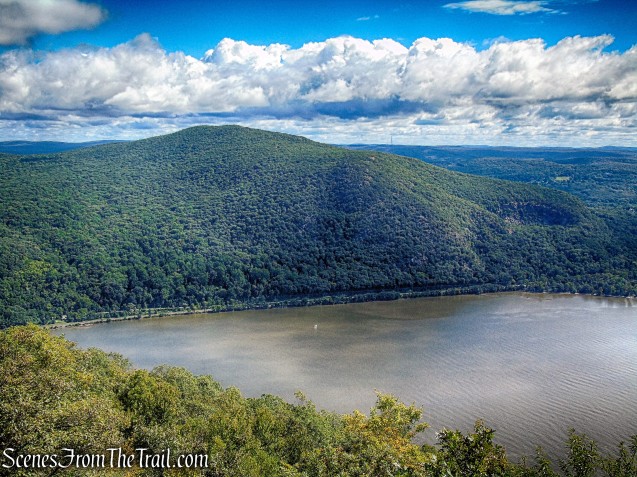 Hudson Highlands State Park Preserve encompasses much of the eastern side of the Hudson River gorge. Totaling 7,400 acres, it has many sections, all administered by the New York Office of Parks, Recreation and Historic Preservation. Many of these sections have dramatic scenery or history, often both. The area was strategically important during the Revolutionary War, resulting in fortifications on both sides of the river, and provided the backdrop for several key events from that era. Trails in this park often include steep climbs and panoramic views of the Hudson River.

I hiked Bull Hill via the Washburn Trail in December 2016. It was a frigid day and the strong wind coming off the river cut like a knife. The Washburn Trail (2.3 miles) is a very strenuous trail that ascends 1400 feet from the river, up the western slope, to the summit of Bull Hill. Climbing Bull Hill with my back to the river, I missed several viewpoints. On this hike I wanted to descend as the river appears in front of me, in order to scope out any views available. Starting the hike on the Nelsonville Footpath (2.6 miles), although still steep is a much more gradual approach than the Washburn Trail. This Lollipop Loop was done in a counterclockwise fashion, beginning in the Nelsonville Nature Preserve.

Trails used: The distances shown are approximately the distances traveled during this hike and not necessarily the total length of the actual trails.

While researching this hike, it was indicated on the trail map and on other hiking websites, that parking was allowed in the Masonic Lodge lot on Secor Street. That is also the trailhead for the yellow-blazed Undercliff Trail which begins at the back of the lot. Upon arriving on the Saturday morning of this hike, that didn’t seem to be the case. There are signs throughout the lot that read: “NO PARKING and NO TRESPASSING.” I was confused and there was no one around to ask. Not wanting to take any chances, we decided to park on the street. Directly across from 29 Secor Street is the start of the green-blazed Nelsonville Footpath. There is pull off parking for three cars right by the entrance to the trail. There is also street parking available nearby.

The hike begins on the green-blazed Nelsonville Footpath indicated by the three green blazes on a tree.

This green-blazed trail is marked with plastic markers which feature the logo of a bull (the blazing may be sparse in places).

Almost immediately, the trail crosses a stream on a small wooden bridge. After crossing the stream, the trail turns left onto an old woods road.

It soon bears left and crosses another stream on a wooden bridge.

The Nelsonville Footpath climbs gradually on the woods road.

At 0.3 mile, the Nelsonville Footpath turns right onto a wide, eroded woods road. 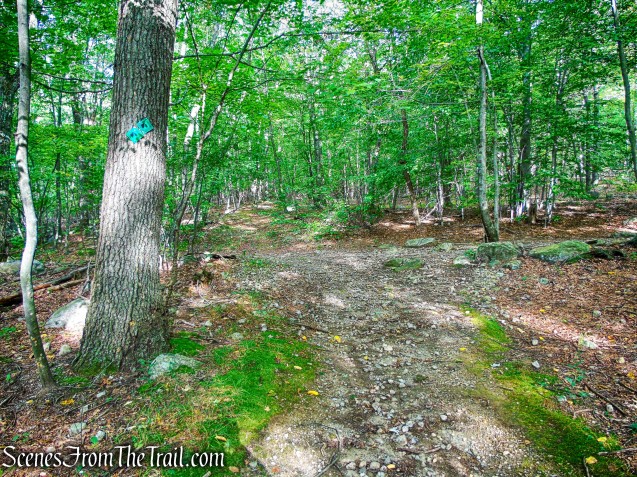 This is also the route of the yellow-blazed Undercliff Trail.

A short distance ahead, the Undercliff Trail leaves to the left, which would be our return route,

Undercliff Trail leaves to the left

but we continued ahead on the woods road, following the green blazes. 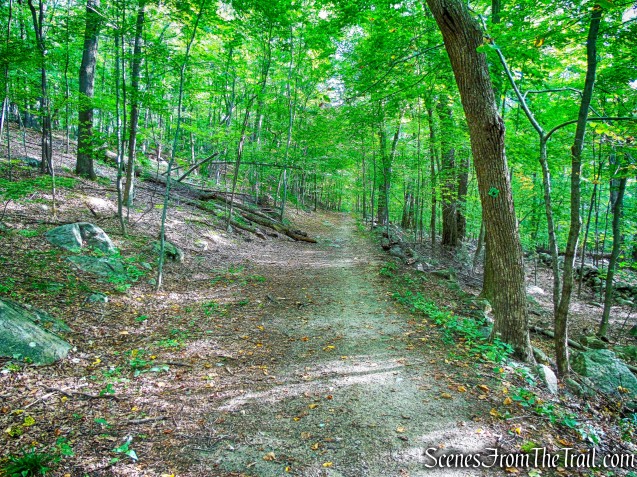 continue ahead on Nelsonville Footpath

There is a nice size parking area here. If I would have known about it, I may have started the hike here.

There is also a kiosk with a map here.

The Nelsonville Footpath continues past the kiosk on the woods road.

The plastic blazes with the bull logos are now replaced by round NYS markers. Although three blazes normally indicates the start of a trail, this is the continuation of the Nelsonville Footpath.

In a short distance, the Nelsonville Footpath reaches a cleared strip of land that intersects the trail. This is the route of the Catskill Aqueduct.

The large stone building uphill on the left is not a pumping station. It houses one end of an inverted syphon that carries the water down to and under Route 301 and then up to the next ridge. 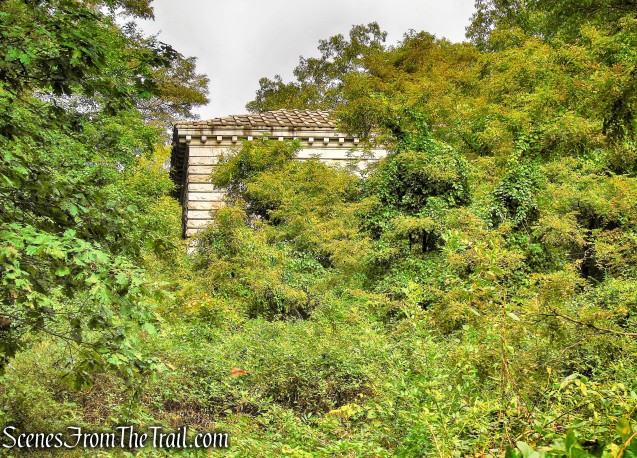 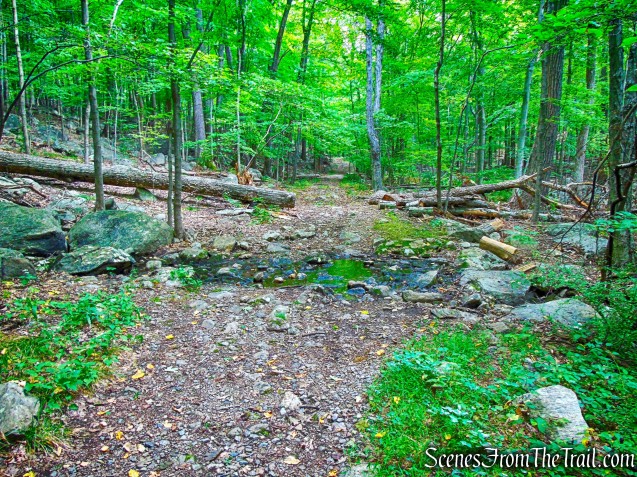 To the right of the trail, some interesting looking mushrooms growing on a tree. They are commonly referred to as “chicken of the woods.” This edible mushroom can be prepared in most ways that one can prepare chicken meat. I have never tried it and I probably never will.

chicken of the woods

At 1.2 miles, it passes gate posts (and a broken gate) which mark the boundary of Hudson Highlands State Park. Just beyond, the Split Rock Trail (red) leaves to the right. 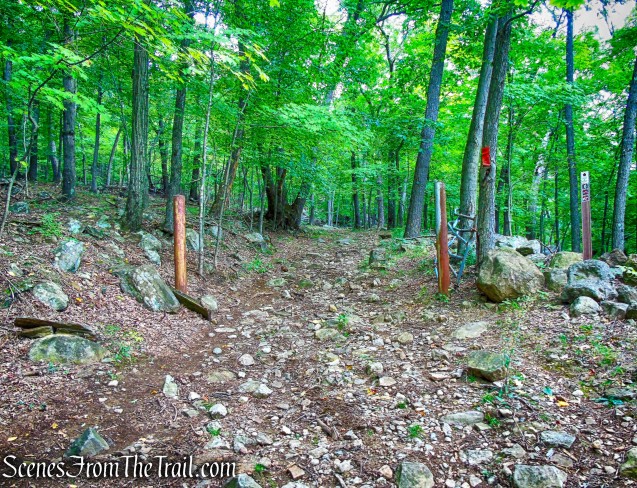 The trail begins to pass through attractive mountain laurel thickets.

After several more turns, the Lone Star Trail (blue) begins to the right. 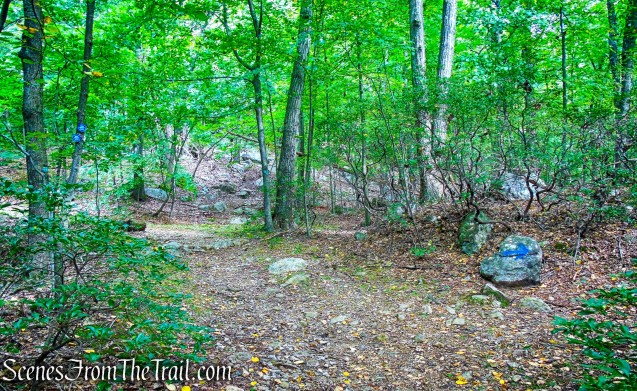 The Nelsonville Footpath turns left and continues to climb steadily along the woods road, quite eroded in places.

The Nelsonville Footpath ends at a three-way junction, with the blue-blazed Notch Trail, which begins on the right and the white-blazed Washburn Trail which continues ahead. 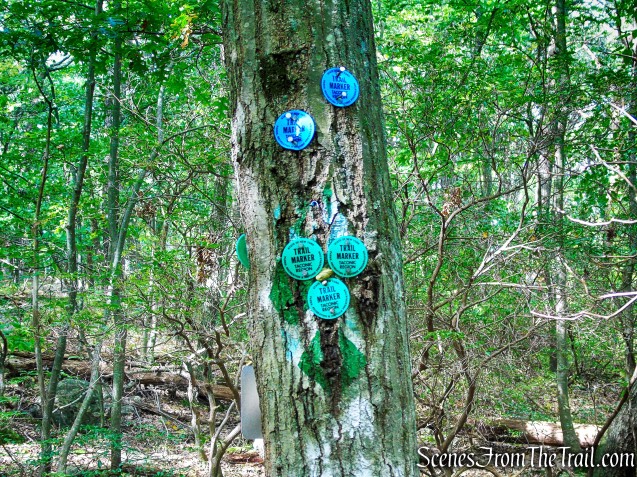 We continued ahead on the woods road, now blazed white as the Washburn Trail. 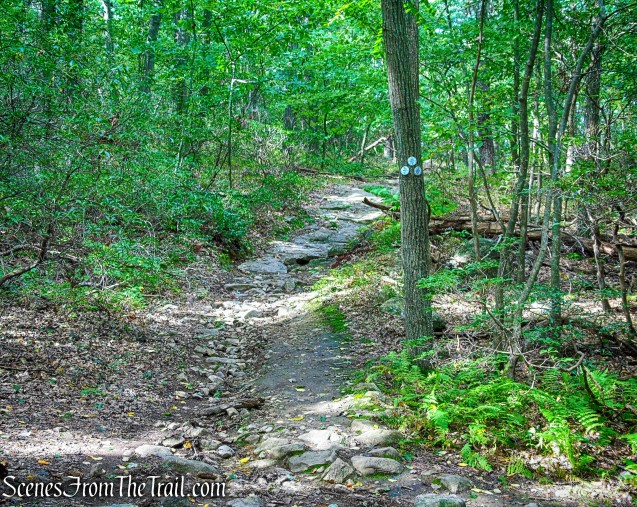 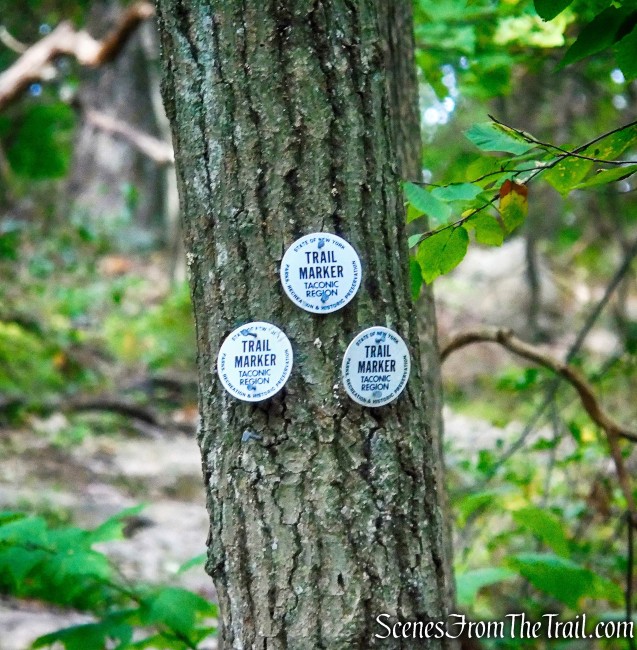 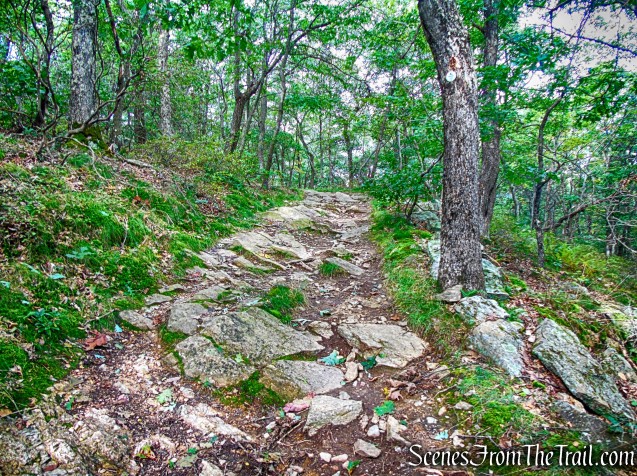 We passed several groups of hikers going in the opposite direction in this area.

As the trail approaches the summit, there is a north-facing view from rock ledges just to the right of the trail. To the left, one can see the Hudson River. The imposing ridge extending northeast from the river is Breakneck Ridge.

The Newburgh-Beacon Bridge is visible through a low point in the ridge.

In the image below, from left to right: North Beacon Mountain with the communications towers at its summit, the fire tower on South Beacon Mountain, the highest point in the East Hudson Highlands and Scofield Ridge visible in the center and Fishkill Ridge on the right, partially obscured..

In the distance, the white cliffs of the Shawangunk Mountains and the Catskills just beyond, may be seen on a clear day. This is was good spot to take a well-deserved rest. We had just climbed about 1,150 vertical feet to reach this point.

Just ahead along the Washburn Trail, there is supposed to be an unmarked side trail on the left that leads to a viewpoint from rock ledges to the south and east. I walked down a few side trails, but did not see any viewpoints. We continued to follow the white-blazed Washburn Trail along the summit ridge. The viewless summit is marked by a split rock on the right and a USGS survey marker along the trail. 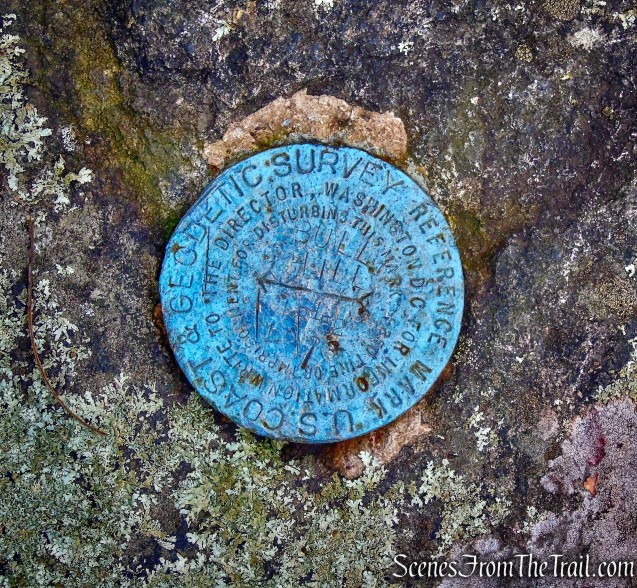 The trail then makes a short, rather steep descent. 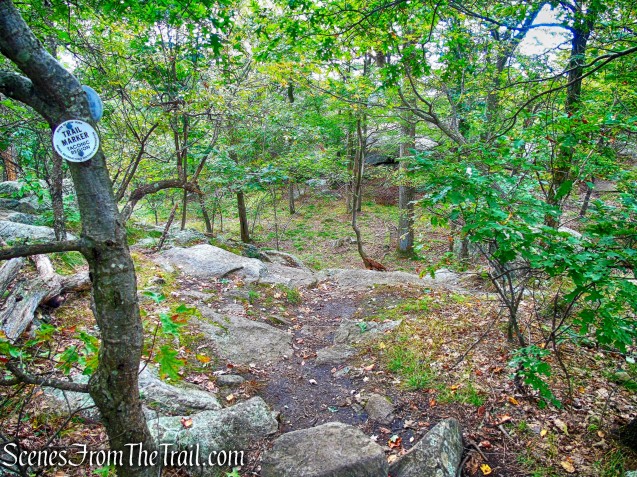 Just beyond, an open rock ledge on the left affords a panoramic south-facing view over the Hudson River. You have to climb up slightly, above the writing for the view. I saw several people walk by and not even bother.

The Manhattan skyline from about 50 miles away.

Just north of the sharp bend in the river, of great strategic importance during the Revolutionary War, is Constitution Island, and beyond the bend is the United States Military Academy at West Point. To the right, on the west side of the river, is Crows Nest Mountain. On a clear day, you can see the Bear Mountain Bridge down the river in the distance. 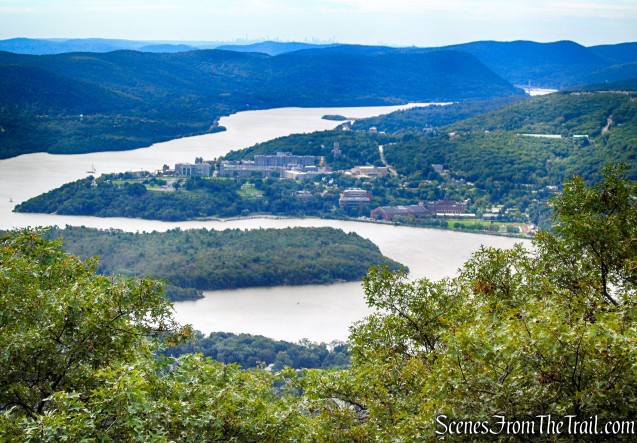 The trail continues to descend, steeply in places.

The trail levels off briefly and along the way, I was on the lookout for any side trails that lead to a view. 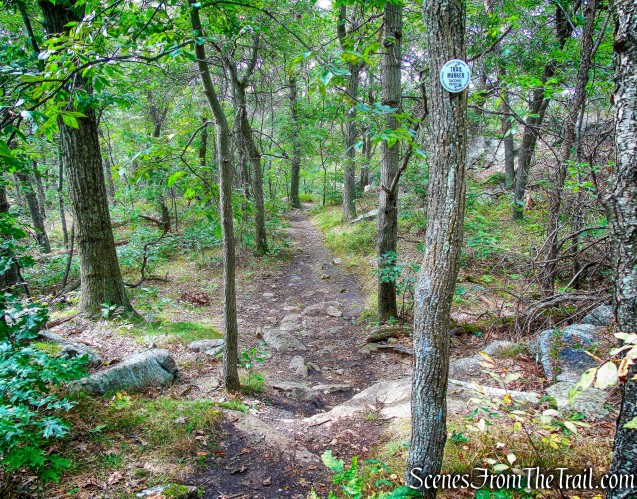 I wandered off trail several times to see if I could find any viewpoints that aren’t listed on the map. I came across this one from a large rock outcrop that was quite nice.

After descending some more, We reached a great viewpoint over the Hudson River from a rock outcrop to the right of the trail. The view was the broadest of the entire hike and extends from West Point up the river to Storm King Mountain (identified by the gash carved into the mountain by the construction of the Storm King Highway in 1922). 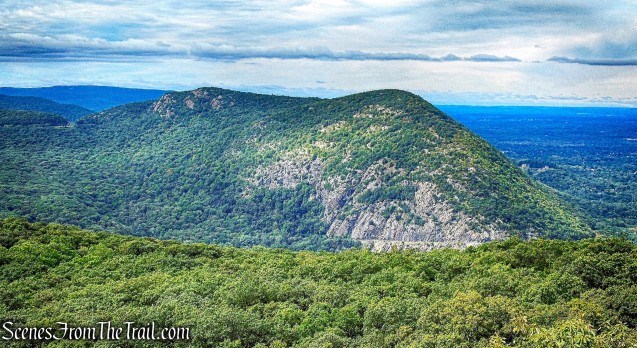 This rock outcrop was crowded so we didn’t stay long.

The Washburn Trail continues to descend rather steeply, then ascends a little. Just beyond, the trail reaches a junction with the yellow-blazed Undercliff Trail. 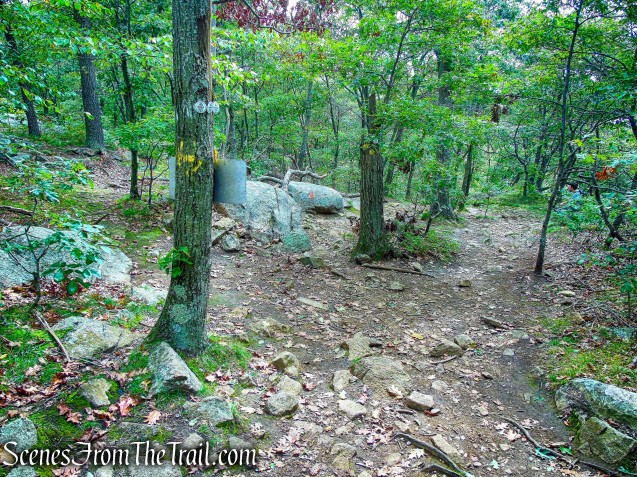 turn left on the Undercliff Trail

To be honest, I was glad to leave the Washburn Trail. It was much too crowded for me. 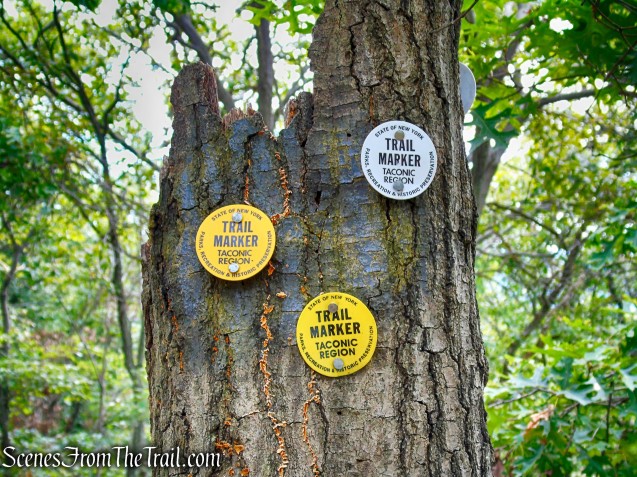 turn left on the Undercliff Trail

The Undercliff Trail soon reaches another viewpoint over Cold Spring and West Point, with Crows Nest Mountain visible to the right, across the river.

The Undercliff Trail continues descending along the shoulder of Bull Hill and soon reaches an east-facing viewpoint over the hills of Fahnestock State Park.

The cleared strip of land and stone building visible in the distance, is the Catskill Aqueduct. 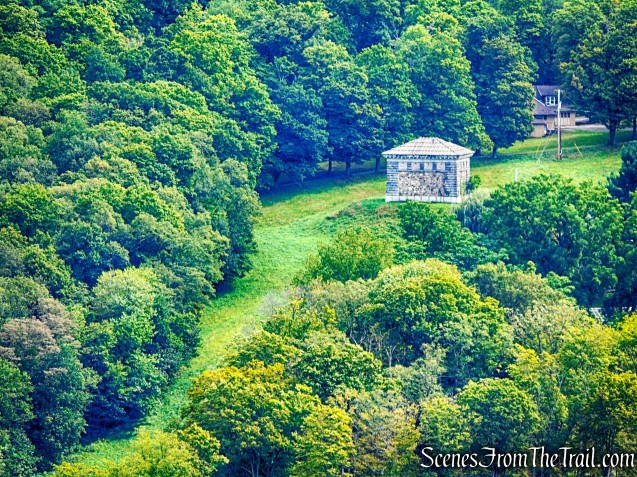 Here, the trail turns right as your facing the view. There are unmarked trails that lead north and I walked briefly in that direction, but stopped when I didn’t see any yellow blazes. It took a few minutes to spot the next blaze. The Undercliff Trail continues to descend, entering the Nelsonville Nature Preserve.

The Undercliff Trail, once in the preserve, is marked by yellow “Nelsonville Footpath” blazes.

As we were descending along the trail, I saw a very large bear print in the dirt, right on the trail. At the base of the descent, the Undercliff Trail reaches a T-junction with a wide woods road, the route of the green-blazed Nelsonville Trail from earlier in the hike.

We turned right and were now retracing our steps from the beginning of the hike. We followed the  joint Undercliff/Nelsonville Trail a short distance. 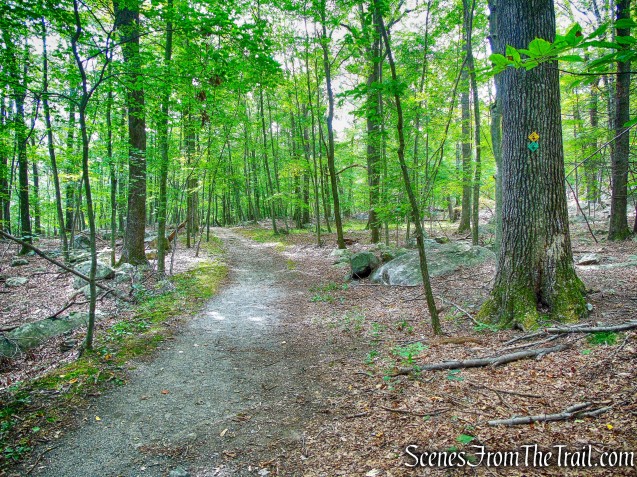 Just up ahead, the Undercliff Trail continues straight as the Nelsonville Footpath turns left onto another woods road. We turned left, following the green blazes. 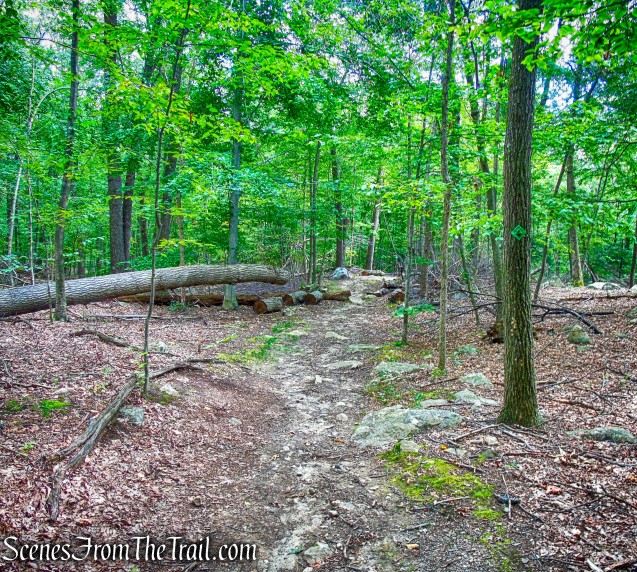 We crossed the small wooden footbridge and turned right.

A short distance later we crossed the second footbridge, 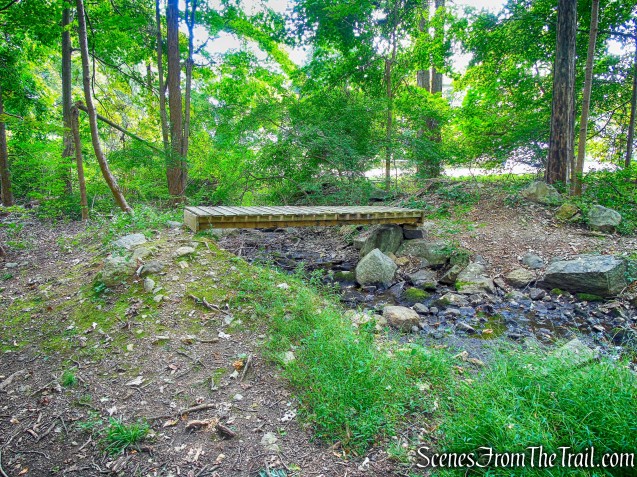 and walked a short distance back to the trailhead on Secor Street, where the hike began.

This was a tough hike, but truly rewarding. Once up near the summit, the views were seemingly endless. I could have done without the crowds, but with a train stop just across 9D, perfect weather, it being a Saturday and the first day of Autumn, there was bound to be plenty of foot traffic. The only crowds we encountered were on the Washburn Trail. The rest of the hike we only passed a few people. If you haven’t hiked Bull Hill, give it a try, it’s worth it.

Cons: A lot of foot traffic on the Washburn Trail, parking can be an issue.