With over 8,000 acres on the Shawangunk Ridge, Mohonk Preserve is the largest member and visitor-supported nature preserve in New York State. The Mohonk Preserve is a private land conservation organization established to protect the Shawangunk Ridge, it is not public land funded by the government. Therefore, there is a day use fee to use the preserve which funds its maintenance and programs.

Having received an annual Mohonk Preserve membership for Christmas, it was high time that I used it. I normally prefer to hike the Mohonk/Minnewaska area on a weekday due to the large crowds on weekends. With that in mind, I tried to design a hike that utilized some of the lesser used trails. Not an easy task, but it worked out well on this day. Although this hike began in the Mohonk Preserve, it travels into Minnewaska State Park through the Peter’s Kill area as well.

This hike began from the West Trapps Parking Area, but passes through the Coxing Kill and Peter’s Kill parking areas, which can be used as alternative starting points. The West Trapps lot opens at 9:00 am and we arrived at 9:03 am. There were only a few spaces left by that time. This hike was done in a counterclockwise fashion, but if done in reverse order, it will be the same amount of elevation gain. I wanted to get to Split Rock early since it attracts crowds, being so close to the Coxing Kill Parking Area. 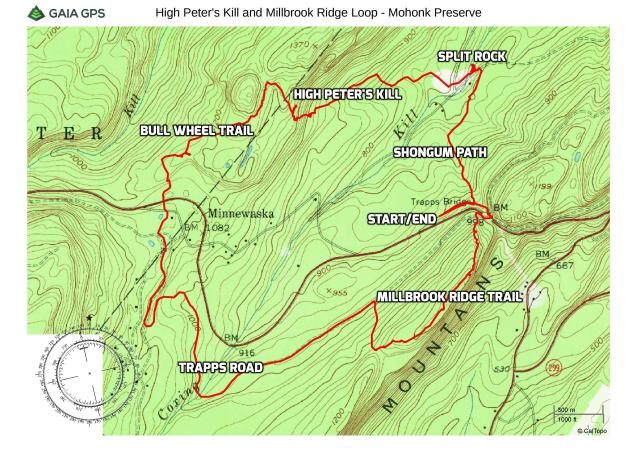 Trails used: The distances shown in parentheses are approximately the distances traveled during this hike and not necessarily the total length of the actual trails.

The hike begins at the eastern end of the parking area at the kiosk. 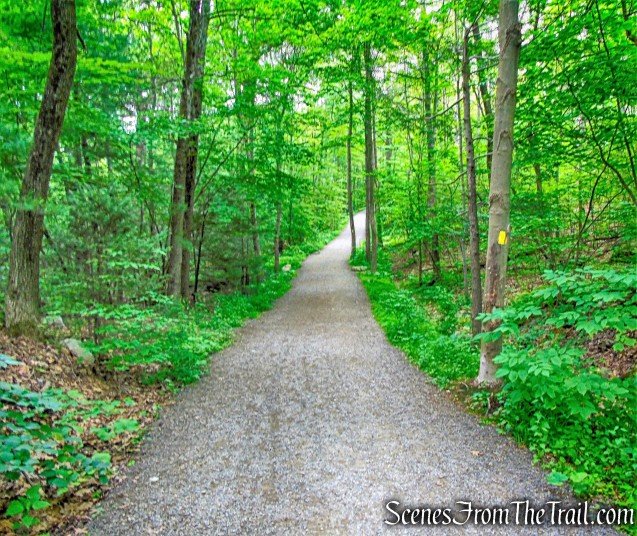 In about 600 feet, we turned left onto the start of the red-blazed Shongum Path, the route of an old Lenape Indian trail. 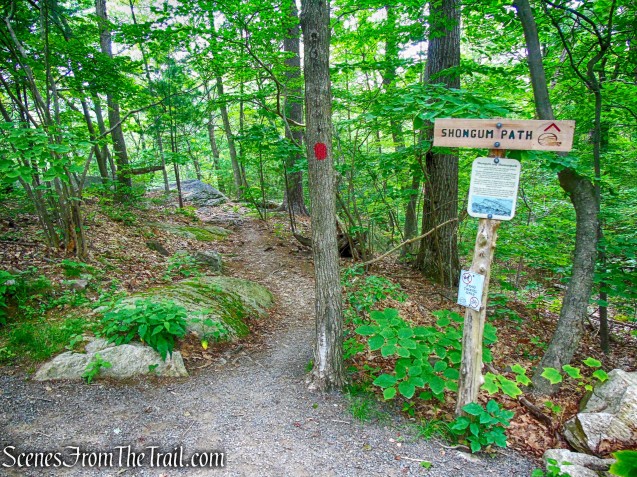 The Shongum Path descends gradually over bare rock at first, as it heads north. Along the way, I heard a loud commotion in the woods. I saw what appeared to be a Black Bear about 30-40 yards ahead of me, to the left of the trail. I saw black fur through the trees and at first thought it was a large dog, but by the time I got near to where I first saw it, there was no trace of anyone or anything.

The trail travels through several wet areas on wooden planks. Eventually the trail veers to the northeast and parallels the Coxing Kill (creek), which is visible through the trees.

After about 0.8 mile, we came to the terminus of the Shongum Path at a T-intersection with the blue-blazed Old Minnewaska Trail, a gravel road, and turned left.

Now heading southwest, we crossed a wooden bridge that spans the Coxing Kill. We turned right and walked down to check out Split Rock.

The Coxing Kill plunges into a small gorge of solid rock and streams out on the other end into a pool.

Located at the site of the former Enderly Family sawmill, Split Rock has long been a favorite place for picnicking by the Coxing Kill. Luckily, we arrived at this spot at approximately 9:30 am and had the place to ourselves.

While there is no “official” swimming area or lifeguard, swimming seems to be allowed and this is a very popular swimming hole. The channel flows into a small sloped pool that is about 3-4 ft deep with a sandy/small rock bottom.

We walked back up to the Old Minnewaska Trail and turned right. Alongside the trail are the Fieldstone foundations of a house and barn, and other outbuildings, which tell of the Enderly family farm, which occupied this place in the 19th century. 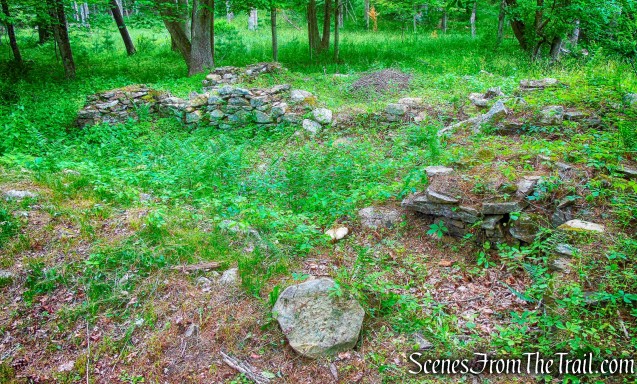 For about a century, the Enderly family operated their farm, sawmill, and blacksmith forge on the Coxing Kill. 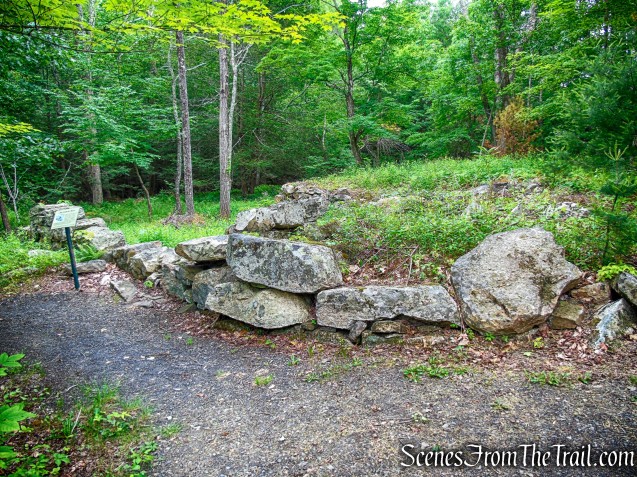 A short distance ahead, we reached Clove Road and the end of the Old Minnewaska Trail. Just across the road is the Coxing Kill Parking Area.

At the southern end of the parking area, there is a kiosk, which marks the start of the light-blue-blazed High Peter’s Kill Trail. This is also the route of the blue-blazed Shawangunk Ridge Trail (SRT). 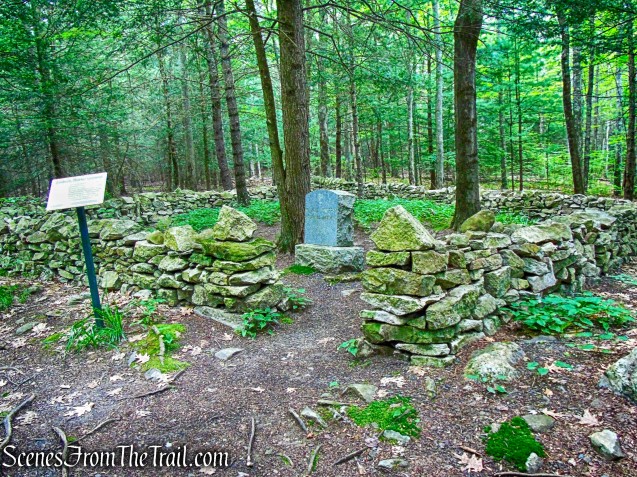 The trail gradually ascends through the woods……

and passes a junction with the King’s Lane Trail. 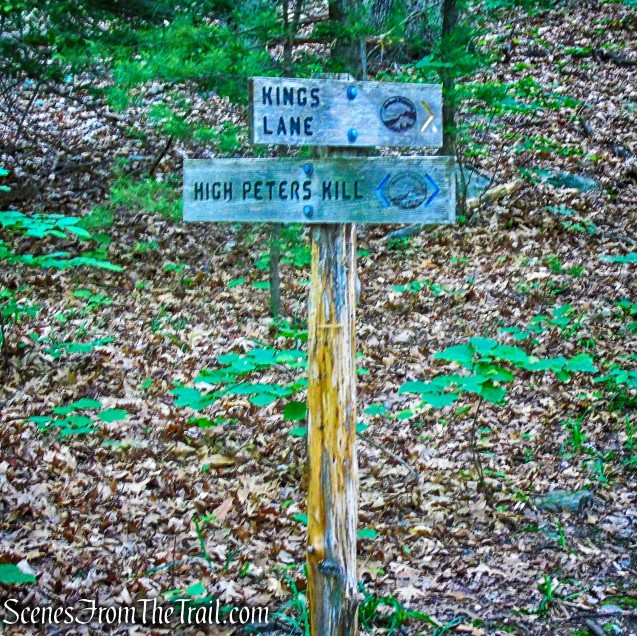 junction with the King’s Lane Trail

The ascent steepens as we continued heading west on the High Peter’s Kill Trail and entered Minnewaska State Park Preserve.

The climb becomes very steep, with the trail routed over stone steps in places. For part of the way, the trail follows the Dugway, a 19th century woods road used to transport millstones quarried near here. 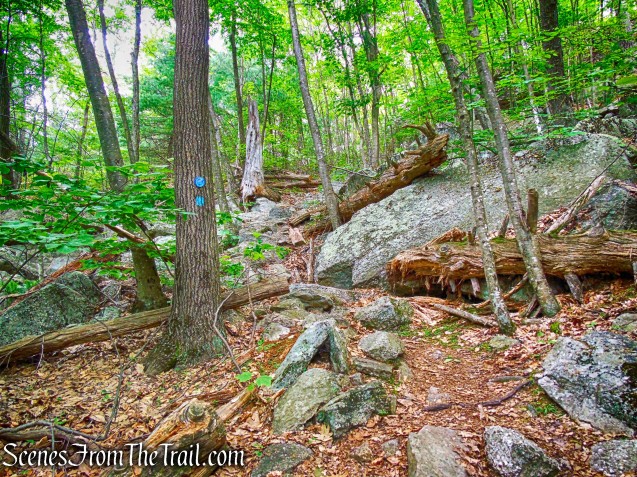 After passing lichen-covered rock outcrops and an interesting “cave” formed by an overhanging rock, the grade moderates.

A short distance beyond the end of the steep climb, as the High Peters Kill Trail turns left, we veered right on an unmarked trail. In about 150 feet, there is an expansive east-facing viewpoint over the Trapps ridge, with the Sky Top tower of the Mohonk Mountain House visible to the northeast. 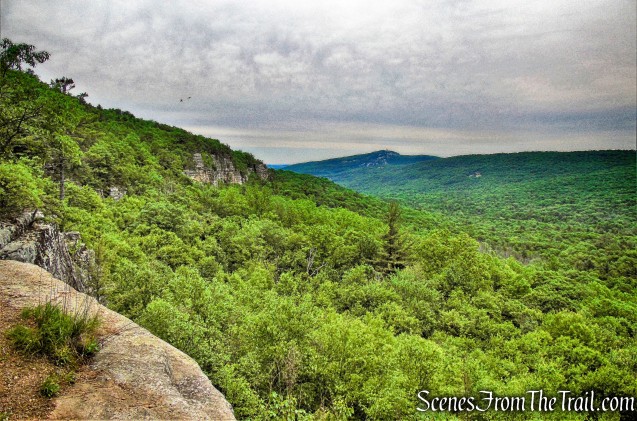 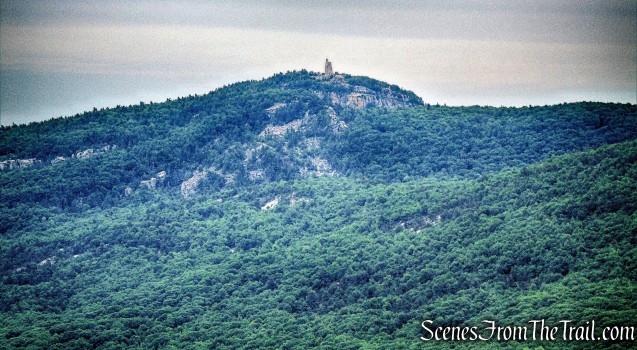 The cliffs of Dickie Barre.

We sat here and took a short break while enjoying the view. To the left is the southern end of the Trapps ridge and the northern ridge of Millbrook Mountain is on the right. The Village of New Paltz may be seen through the narrow notch between The Trapps and Millbrook Mountain.

We returned to the High Peter’s Kill Trail and turned right. The trail now follows a relatively level path through blueberries and mountain laurel, with some pitch pines.

Just below the crest of the rise, the white-blazed Bull Wheel Trail, which leads to the Peters Kill parking area on Route 44/55, begins on the left. 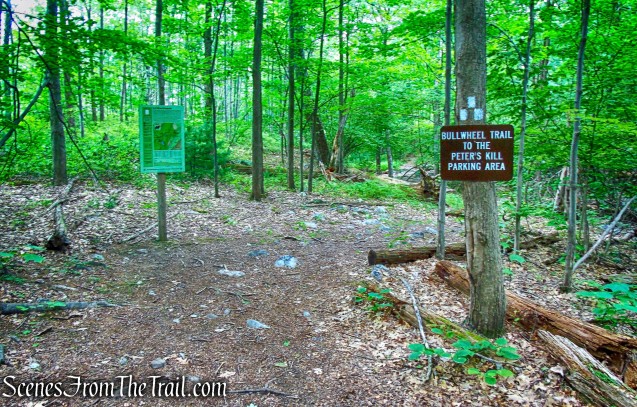 In some sections, the trail narrows to a footpath.

There are dual-colored-blazes on either side of the trail that are not on the hiking map. These trails are designated for rock climbing and bouldering, which require a permit, which can be purchased at the Peter’s Kill Parking Area.

The trail then passes through a flat open area over rock slabs.

The trail passes a concrete slab, with steel bolts protruding. A tower that was anchored to the slab via the bolts once supported a pulley for a ski lift, part of the Ski Minne downhill ski area, which operated from 1964 to 1978. The pulley is commonly referred to as a “bullwheel,” hence the name for the trail.

The trail then widens back to a gravel road as it descends.

After about 0.5 miles on the Bull Wheel Trail, it ends at a T-intersection with the Red Loop Trail. 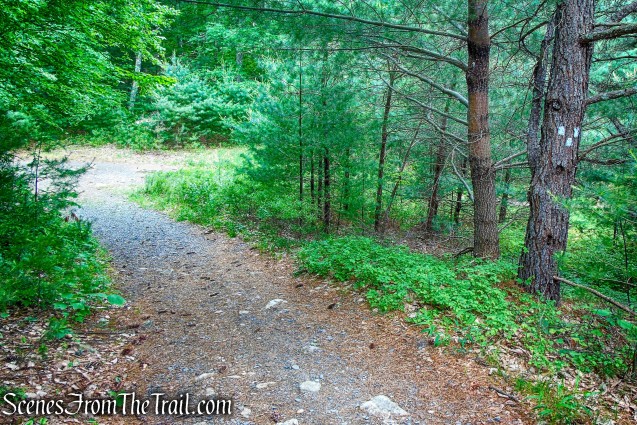 T-intersection with the Red Loop Trail

We turned left on the Red Loop Trail and walked a short distance on the gravel road to the Peter’s Kill Parking Area. We took a short rest at a picnic table and enjoyed a snack. 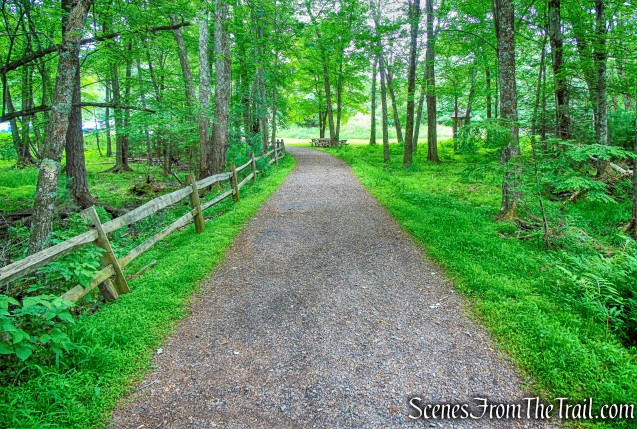 When we were ready to resume our hike, we walked out to Route 44/55 via the entrance road to the Peter’s Kill Area.

Directly across the road from the entrance is the start of the white-blazed Awosting Falls Connector Footpath.

We took this trail a short distance to its terminus, at a T-intersection with the red-blazed Awosting Falls Carriage Road.

We then turned left on the Awosting Falls Carriage Road and walked about 350 feet to the paved Lyons Road. Just beyond, the carriage road crosses paved Lyons Road and re-enters the Mohonk Preserve (the red blazes end here).

continues around a hairpin curve….

and in another two-thirds of a mile, crosses the Coxing Kill on a wooden bridge.

Trapps Road continues to parallel Route 44/55, but for most of the way, the highway is located some distance from the carriage road and cannot be seen (although sounds of traffic can sometimes be heard).

Along the way, we passed a junction for the Coxing Trail and about 0.5 mile later, we reached the junction with the red-blazed Bayards Path.

Although carriage roads are normally nice to walk on, I was glad to leave it and jump back on a trail. 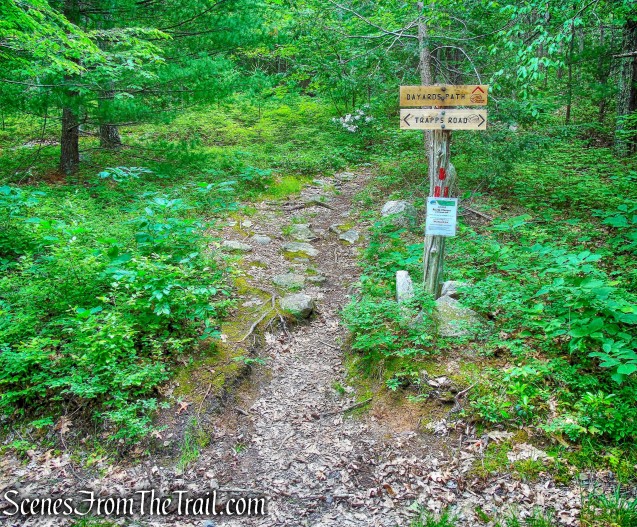 The red-blazed Bayards Path ascends on a moderate grade to the saddle of Millbrook Mountain.

The narrow footpath is overgrown in some spots.

In about 0.21 mile, the trail ends at a T-intersection with the Millbrook Ridge Trail. 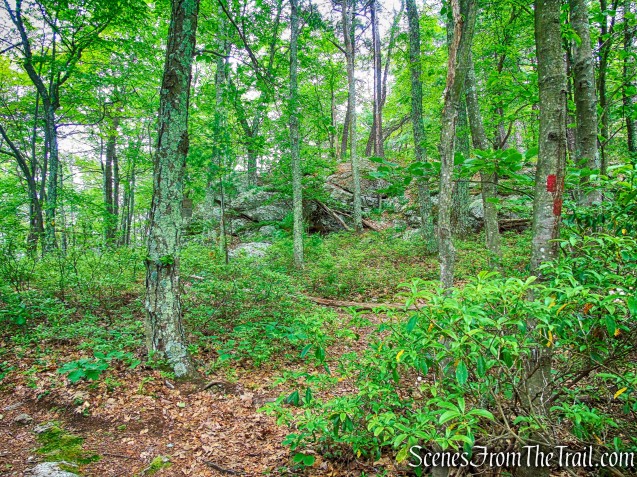 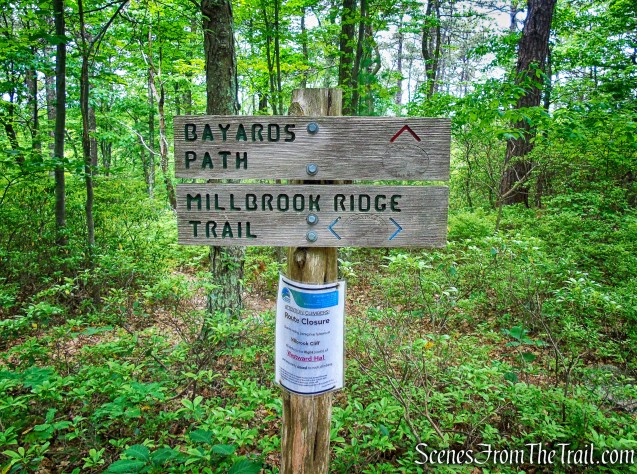 We turned left on the Millbrook Ridge Trail and began heading northeast along the ridge of Millbrook Mountain. 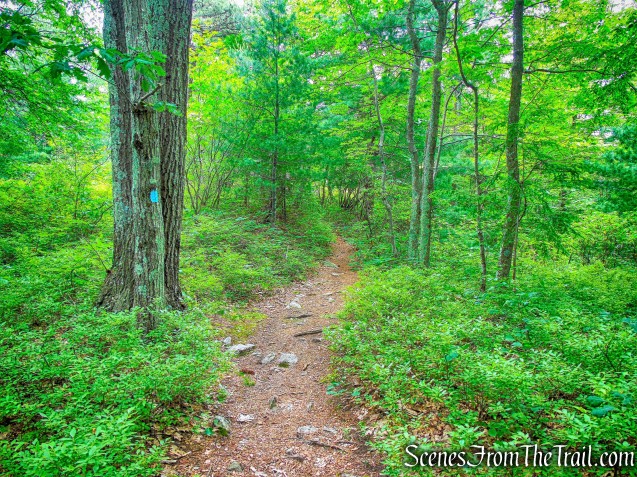 This was the best part of the hike for me. The ridge walk was quite scenic and I enjoyed it very much. With no more real elevation gain, it was now a walk in the park, sort of speak. 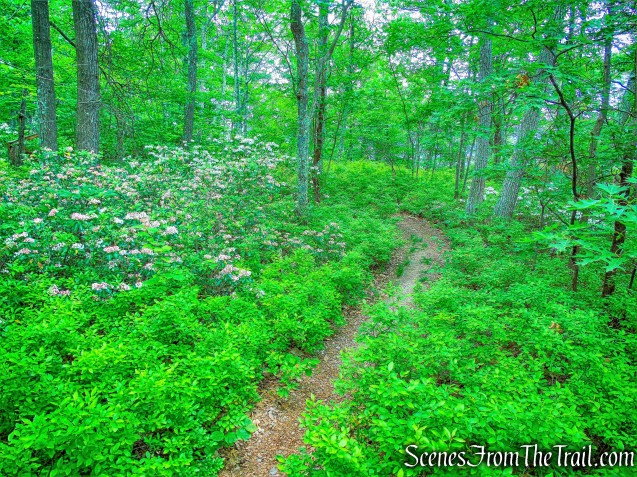 The trail passes some partial views along the ridge then comes to open rock ledges with more expansive views.

The trail continues over rock slabs along the ridge, with pitch pines.

More views open up along the ridge, with the Catskill Mountains visible to the north. The Devil’s Path range of the Catskills.

Directly northeast is the southern end of the Trapps. 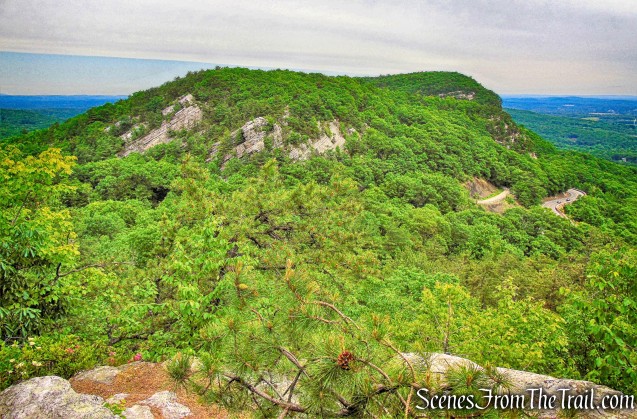 The trail comes out onto slanted rock with more views. The trail then descends steeply to the left of the boulder.

I happened to see a survey marker along this spot as well. 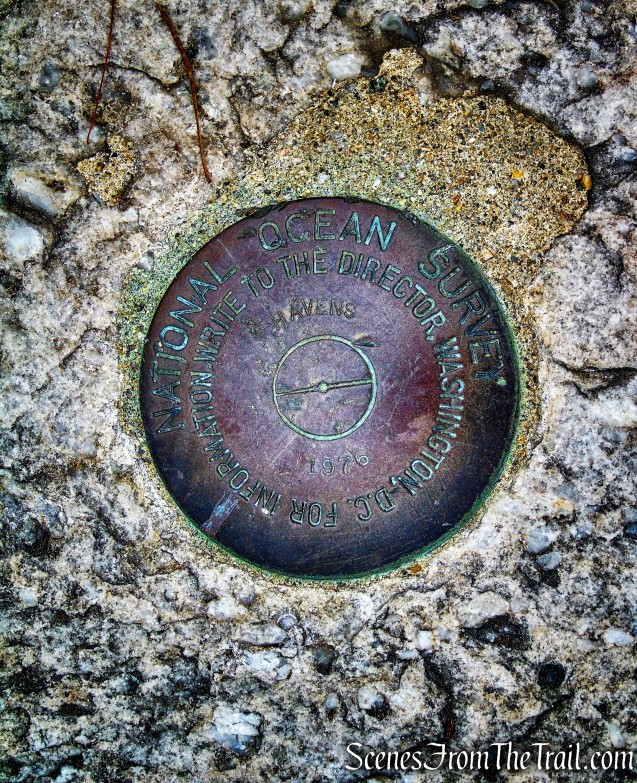 There are still more views as the trail descends. Below, the cliffs of Dickie Barre.

the cliffs of Dickie Barre

Ashokan Highpoint is visible to the right of Dickie Barre. 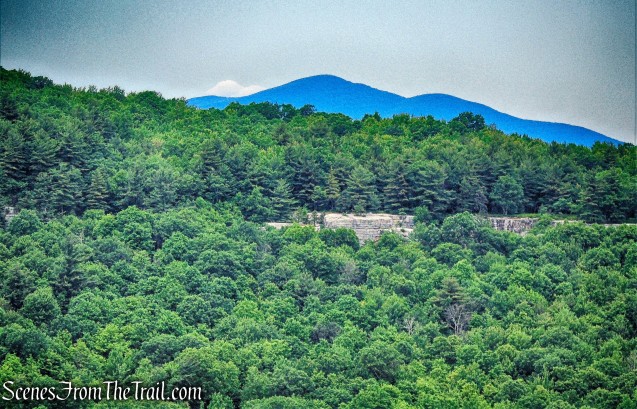 The trail continues its steep descent over open rock slabs. This part of the hike was fun, especially because we didn’t have to climb up this way. 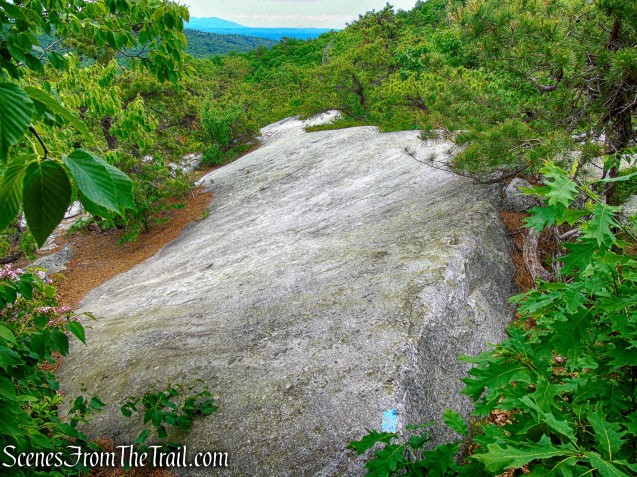 After almost a mile of hiking the ridge, we descended to Trapps Road. 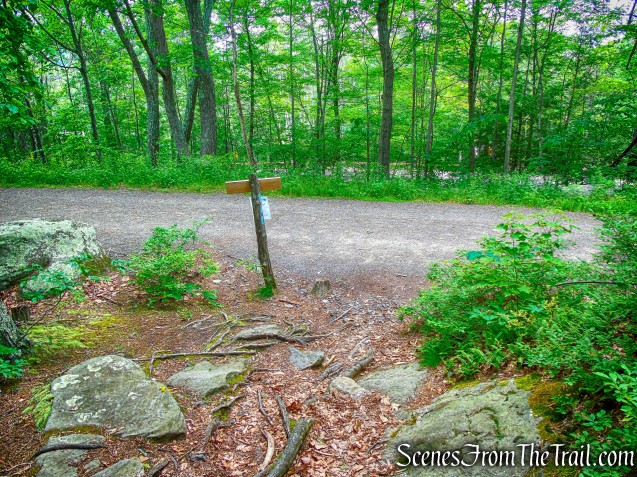 We turned right on Trapps Road and walked about 150 feet to the Trapps Bridge. 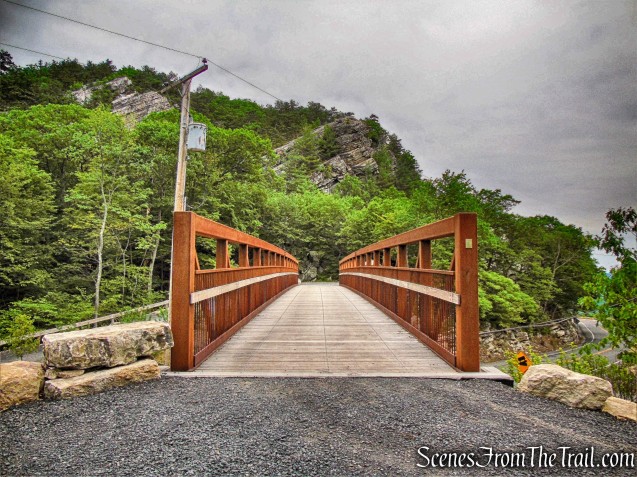 After crossing the Trapps Bridge over Route 44/55, we turned left, descended stone steps, and turned right on the yellow-blazed West Trapps Connector Trail that leads back to the parking area where the hike began.

On the way out, while driving by the visitor center on Route 44/55, a Black Bear came rolling down the hill and landed on the road. It promptly got up and crossed the road and I believe walked down into the visitor center parking area. I watched this through the rear view mirror as I drove.

This was another great hike in the Gunks. I was surprised at the lack of crowds along the way. We passed a few groups on the Millbrook Ridge Trail as we neared the end and several other hikers earlier. For a Saturday, we mostly had the trails to ourselves. 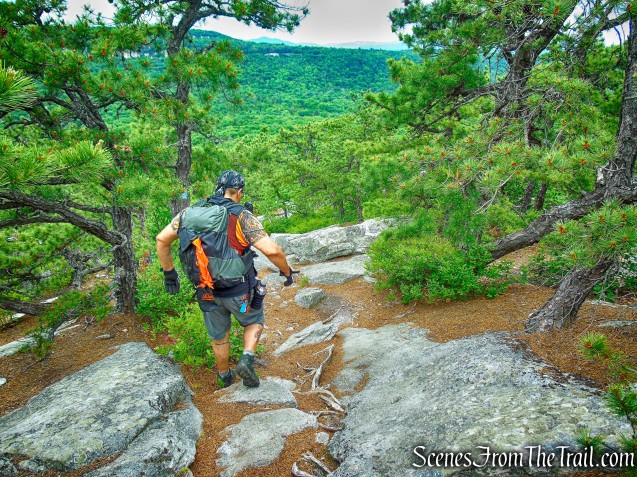 Scenes From The Trail, 2019. Unauthorized use and/or duplication of this material without express and written permission from this site’s author and/or owner is strictly prohibited. Excerpts and links may be used, provided that full and clear credit is given to Scenes From The Trail with appropriate and specific direction to the original content.