Route type: out and (almost) back

Located in the Village of Tarrytown, in the Town of Greenburgh, Glenville Woods is a 44.7-acre nature preserve which connects to a 580-acre strip of unbroken parkland. The Preserve’s hiking trails enhance access to several local recreational sites, including the North County Trailway and the Tarrytown Lakes Trail. The property contains woods, wetlands, steep slopes and rock formations.

I noticed the sign one day while visiting the deli next door and took a short walk into the woods just to check it out. After checking out the location on Google Maps, I noticed that I may be able to walk all the way to the Tarrytown Lakes, cross the road by Eastview and enter the southeast section of Rockefeller State Park Preserve to continue hiking. I mapped out the hike and decided to give it a shot.

It was another decent January morning with temps in the mid 30’s and sunny. It had snowed in recent days so I decided to hike closer to home where there would be little or no snow on the ground. Since this hike included areas that I had not been on before, we spotted cars. By spotting cars that gave us the luxury of extending our hike in Rockefeller’s without having to retrace our steps through Glenville Woods. We dropped one vehicle at the Park and Ride by the Tarrytown Lakes and then drove over to Glenville Woods Preserve to begin our hike. Since it was Sunday, we parked in the lot for the Wedged In Deli which is closed on Sundays. We walked over to the kiosk which has a trail map and took a look at it. We would begin the hike by following the blue-blazed trail. We then proceeded into the park and crossed over a footbridge.

We stopped for a moment on the footbridge…..

and then continued on the blue-blazed trail passing a small cinder block building as we began to head uphill. 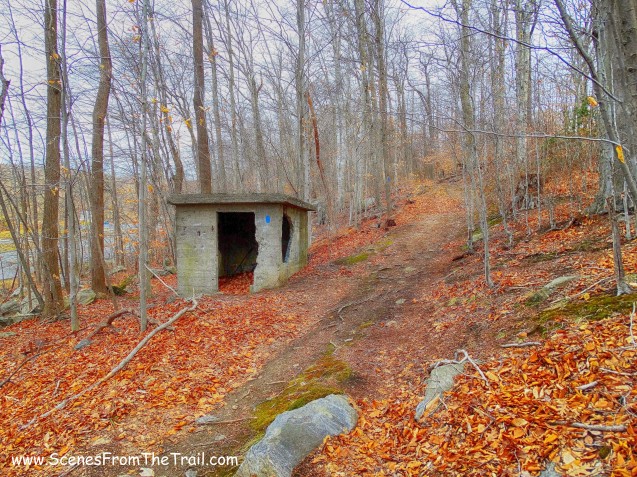 A yellow-blazed trail came in from the left so we checked it out. The trail seemed to lead towards houses so we turned right at the next junction and began heading east, continuing up the hill as the blazes disappeared. We walked through a collapsed section of stone wall and then saw a  stone retaining wall off to the right. From what I read, this wall was built by the Emergency Work Bureau of Westchester County in 1933.

As we walked a little further north we passed some kind of guard rail made from stone and wood.

It looks as if this was once a woods road. Although the stonework was probably done in the 1930’s, this road may have been in use well before that. We continued on and came to what looked like some kind of stone overlook that faced the Saw Mill Parkway.

As we walked further north, the trail became more overgrown and harder to follow. We could see the Saw Mill Parkway through the trees so we just stayed parallel to it, semi-bushwacking through the trail.

The trail faded out and we encountered heavy brush as we neared the Eastview exit off the Saw Mill Parkway so we bushwacked towards the SMP. We walked along the parkway briefly and then ducked back into the woods. We were now bushwacking, but it was much easier and we were close to the Park and Ride, where we had left one of the vehicles. I happened to look down and found an old bottle.

I could see why it was named Cheer Up. One of the ingredients was Lithia.

We then proceeded towards Old Saw Mill River Road.

We walked up onto the NCT heading north and passing the tracks of the old railway.

Now we were looking for some sort of connector trail that led to Rockefeller State Park. I had called the park office and spoke to a woman on the phone. She told me that there was access to the park from here and that the gate was always open. The gate that we saw was locked and there was a fence between Rockefeller’s and the NCT. My GPS told me that the trail was about 100 feet away on the other side of the fence. As we walked, I happened to see a section of fence that was pushed over. We made a beeline for the opening and climbed up the steep hill towards Perry Road, the trail we were looking for. 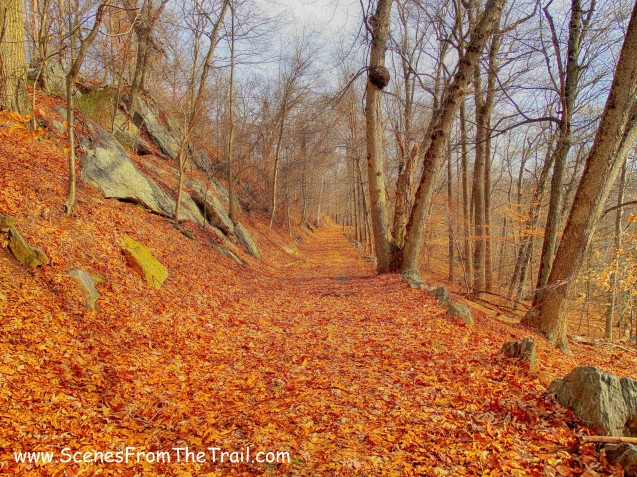 Most of the trails at Rocky’s are carriage roads which makes for a nice gentle walk in the woods. This section of the park appeared to be seldom used as the leaves did not appear to have been trampled on. I feel lucky to have grown up in the area and have such a beautiful place to escape to.

After a mostly level walk on Perry Road, we came to a junction. Here we made a hard right and began walking on Raven’s Rock trail. It led us downhill and then leveled off.

After a slight ascent, we arrived at Raven Rock. Washington Irving wrote in The Legend of Sleepy Hollow; “Some mention was made also of the woman in white, that haunted the dark glen at Raven Rock, and was often heard to shriek on winter nights before a storm, having perished there in the snow.”

Jeff Canning and Wally Buxton’s History of the Tarrytowns, gives some more details:
“Raven Rock is part of Buttermilk Hill in the northern reaches of the Rockefeller estate near the old Hawthorne Traffic Circle. Legend tells us that three ghosts, not just Irving’s lady in white, roam the area.

The lady in white was a girl who got lost in a snowstorm and sought shelter from the fierce wind in a ravine by the rock. The snow drifted in and she perished during the night. It is believed that the spirit of the lady meets the wanderer with cries that resemble the howling of the wind, and gestures that remind one of drifting snow, warning all to stay away from the fatal spot.

A more ancient legend tells of an Indian maiden who was driven to her death at Raven Rock by a jealous lover. Her spirit is believed to roam the area, lamenting her fate.

The third spirit is that of a colonial girl who fled from the attentions of an amorous Tory raider during the Revolution and leaped from the rock to her death“. 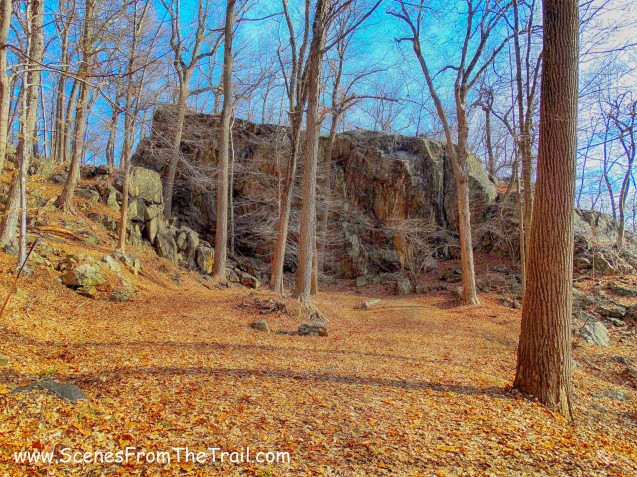 This massive rock formation dominates the hillside. We stopped here to take a break and see if any ghouls would make their presence known. I was bummed, not a ghost in fright…er I mean sight. To get an idea of how immense Raven Rock is, I included an image of me standing in front of it.

I took a walk between the two rock formations to check the place out.

From the top of Raven Rock, I could see White Plains and Hawthorne through the trees. I had fun scrambling up there and then climbing back down. What a cool place this was. I had never been here before nor do I remember hearing about it. When we were done climbing around, we headed back up Raven’s Rock trail and proceeded north on Perry Road.

As we walked along Perry Road, there was a green fence that paralleled the trail. When the fenced turned left, so did we. Using this unmarked road, In a few minutes we arrived at Fergusons Lake. There are four lakes real close to each other and three are called Fergusons Lake. A tripartite lake named for George Ferguson, who had four large icehouses on the lake west of the Pocantico Hills Central School. 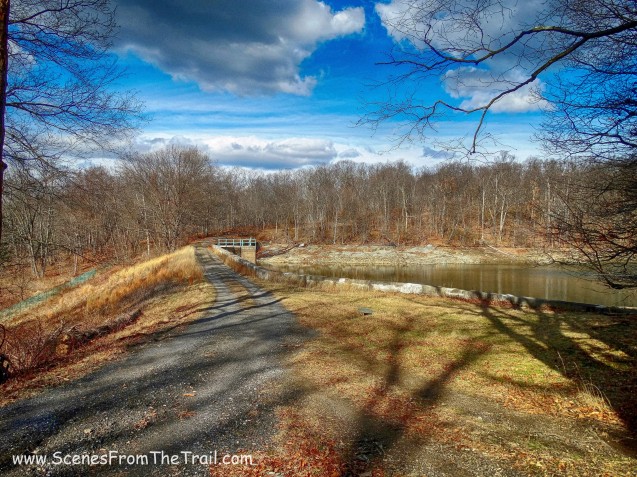 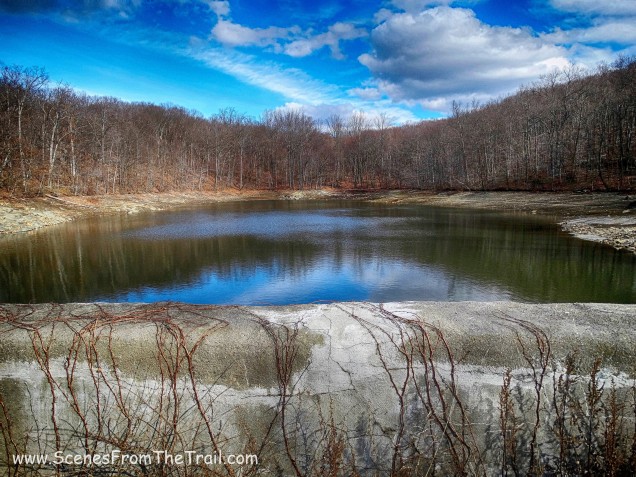 We then walked pass the lake and ended up on Ferguson’s Loop trail. After a short while on this trail we saw an open field through the trees. We took a short footpath towards it and stopped to admire the scenery.

We wanted to take a break here, but there was a cow fence keeping us out. We walked along the edge of the field and saw a stone wall. Here we climbed atop the wall and out onto the field. We were right across Route 448 from Stone Barns. We found a nice flat rock to sit on and warmed ourselves in the sun. We then retraced our steps to the Ferguson’s Loop trail and made a right, now heading southwest. We came to another dammed lake (also named Fergusons Lake).

We retraced our steps once again until we got to the Flying Squirrel Trail and turned right, heading uphill. We came to the junction with Perry Road and followed it south, back to where we originally got on it. There we bushwacked down the hill and passed through the collapsed section of fencing and back out onto the North County Trailway. We headed south towards the Park and Ride where we spotted a vehicle. From there we drove back to Glenville Woods to pick up the other vehicle. We were now ready to dig in to some homemade Chicken Marsala with Wild Rice and Banana Splits for dessert. I hope that you enjoyed the hike and don’t forget to follow my blog and/or share with your friends. See you next time and don’t forget to get out there and take a hike!

2 thoughts on “Glenville Woods to Raven Rock and Fergusons Lake”