Sylvan Glen Park Preserve is the site of The Mohegan Lake Quarry which operated from the 1890’s to 1940. It provided granite for St. John the Divine Cathedral, the New York State Office Building in NYC, the Schwab mansion, the State Armory and the Roosevelt Memorial in New York. It is also written that Mohegan Lake Quarry provided the granite blocks used in the construction of the Shrub Oak Methodist Church. Ornamental pieces, such as the eagles on the Arlington Memorial Bridge in Washington, D.C., were carved with finger-grip hammers by quarry workers. Columns and cornices were carved with the aid of steel shot and water, shaped with pneumatic hammers and polished with steel discs at the site. Some equipment, cables, building foundations, discarded columns and polished blocks remain at the quarry site for hikers to view.

The 408 acre park has 6.2 miles of trails and is located in northern Westchester County, NY. The property was purchased in 1981 and was opened as a park when additional adjoining properties were acquired. Quarries of various sizes and remnants of the operations are located throughout the western portion of the park. Subsequent acquisition of adjacent land extended the park onto former farmland and provided another entrance to the park. The trails traverse a variety of terrain, from steep climbs to gentle woods roads. Interpretive signs, near the quarry operations that ceased at the beginning of World War II, provide an insight into the Town of Yorktown’s largest employer at the time. The trails through the former farmland offer a different perpective of land use, including a 0.25 mile riding ring and large ditches dug to drain wetlands. 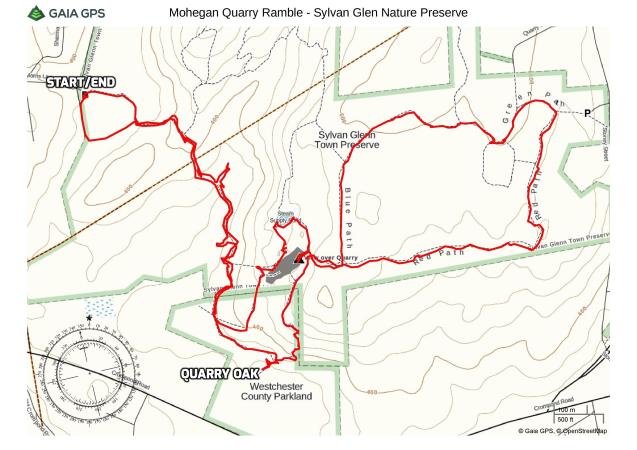 The forecast called for rain in the early afternoon and I wanted to get a hike in before the skies opened up. I figured that this was a hike that could be completed in a few hours. We were able to complete the hike in about 2 hours and 40 minutes and just as we began to drive away, it began to rain. Perfect timing.

From the kiosk at the end of the parking area, we proceeded ahead on the white-blazed Turtle Pond Trail.

The Turtle Pond Trail follows a woods road and passes a pond on the right.

After passing a fenced-in dog park on the left, the trail bears right, then turns left as it heads uphill.

At the top of the climb, three yellow blazes on a tree to the left mark the start of the Snake Hill Trail and almost immediately the end of the blue-blazed High Quarry Trail. We continued on the Turtle Pond Trail which descends to cross a gas pipeline and reenters the woods on a footpath. 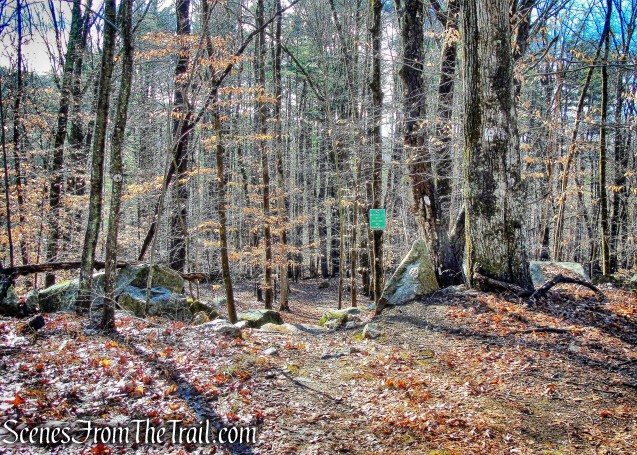 After reentering the woods, the Turtle Pond Trail passes through white pines and crosses Sylvan Brook.

Foundations and remnants of quarrying operations along with interpretive signs are along the trail. The trail turns, passes the High Quarry Trail (blue) to the left and turns right. At 1.1 miles, the trail turns left, passes the end of the Sylvan Glen Trail (red), and ascends. The Turtle Pond Trail ends at the blue-blazed High Quarry Trail, here we turned right and headed steeply uphill.

At the top, pieces of abandoned quarry machinery and cables are scattered along the trail.

The High Quarry Trail ascends along the edge of the quarry pit, with slabs of granite to the left. 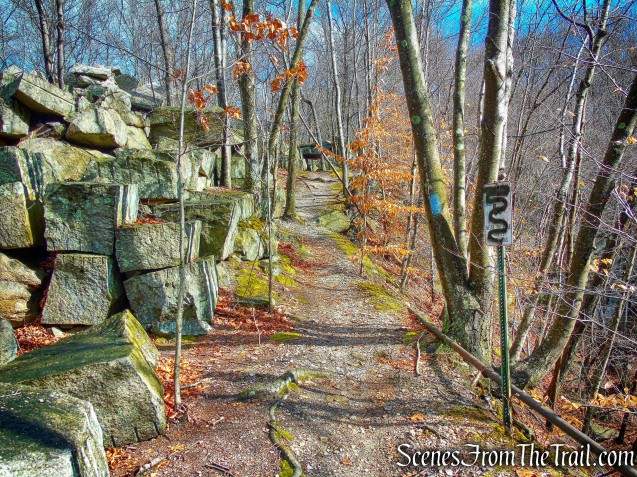 At the top of the rise, the trail goes under a rock bridge. 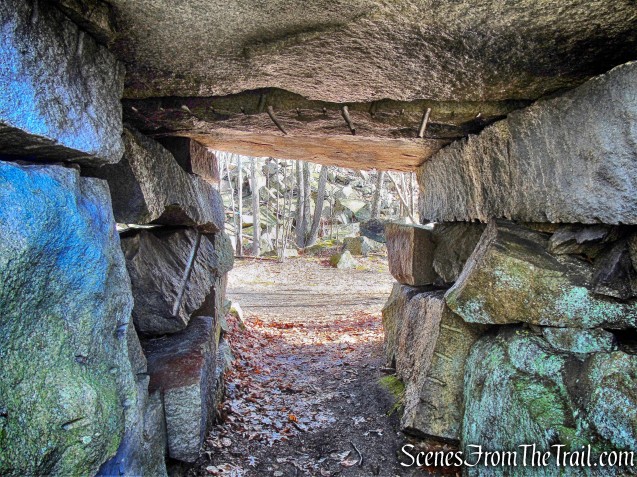 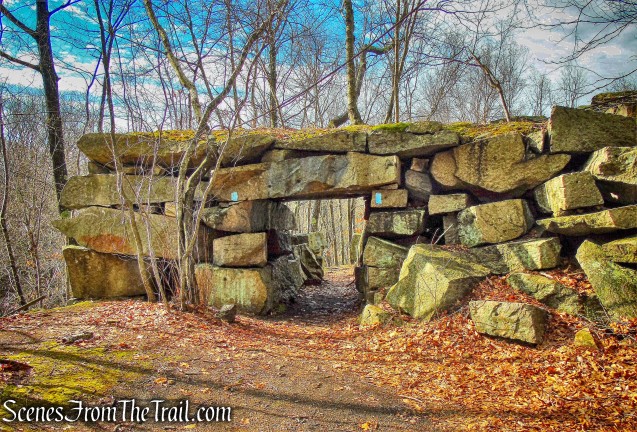 The High Quarry Trail begins to descend, passes a water-filled quarry and then a stone shed that housed explosives. 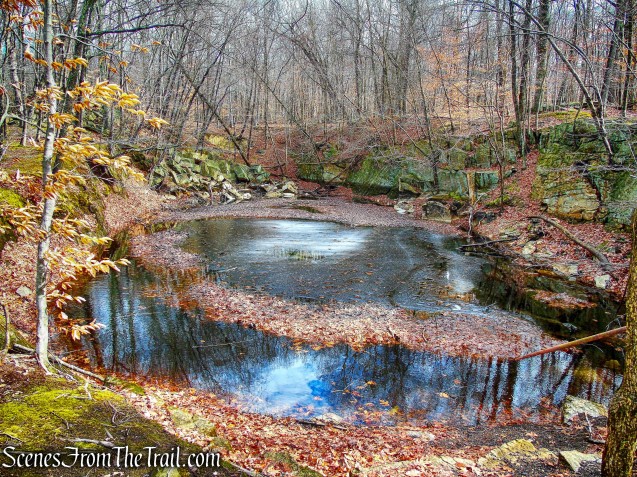 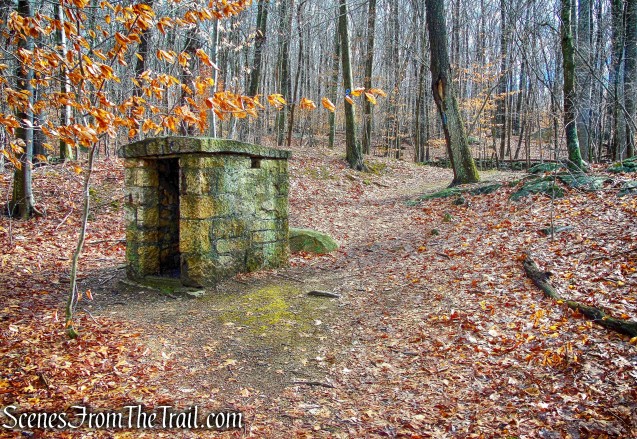 At approximately 1.7 miles, we took a side trail to a view into the quarry pit and to the west. Making sure to observe caution and staying back from the edge.

view over the quarry

When the trails split, we veered right and began following the red blazes of the Sylvan Glen Trail. 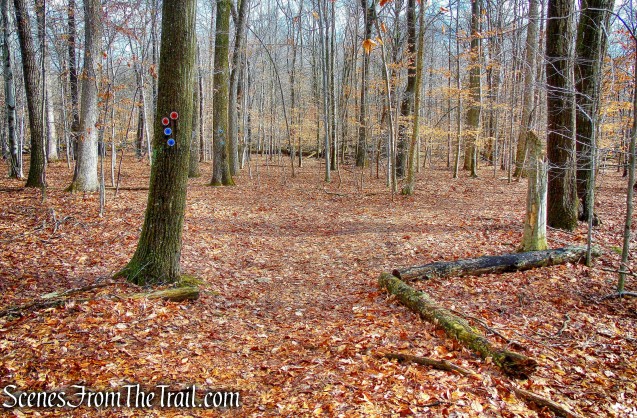 The Sylvan Glen Trail passes through and by numerous stone walls and then crosses a stream. 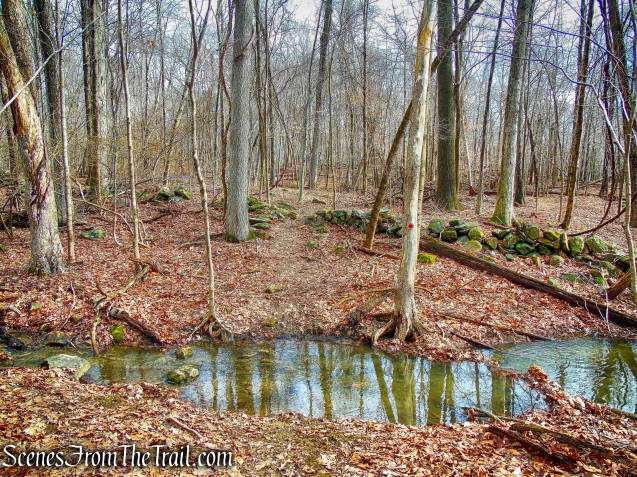 The trail passes through another wet area and goes up and over a knoll.

After going through several stone walls, the Sylvan Glen Trail passes a pond on the right. 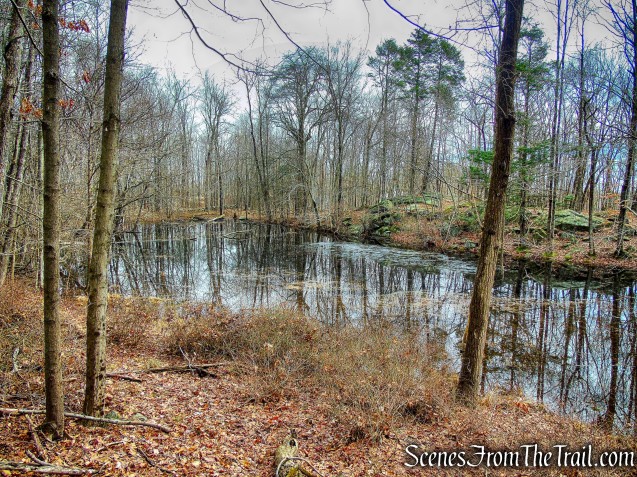 After passing the pond, the red-blazed Sylvan Glen Trail ends at a junction with the green-blazed Old Farm Trail. This junction is approximately the midpoint of the hike at 2.5 miles. To the right are wooden planks that lead towards another trailhead and parking area on Stoney Street. We turned left onto the Old Farm Trail and began heading west. 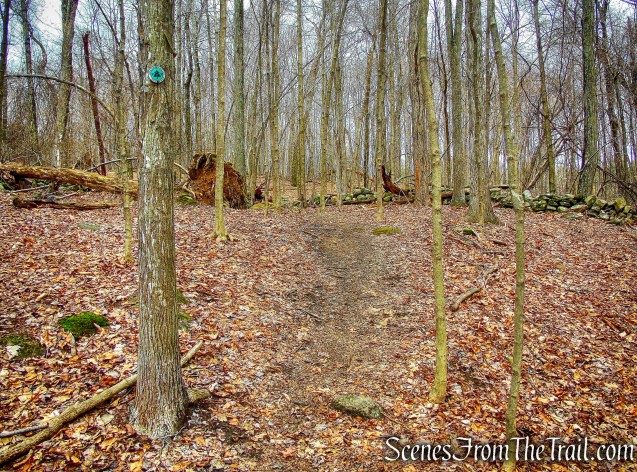 The Old Farm Trail heads uphill and passes an orange blazed trail to Quarry Drive (no parking). After going through a stone wall, it turns right onto the Ring Trail (yellow), an old riding ring.

In about 100 feet, the Old Farm Trail, departs from the Ring Trail, turns right and passes through the stone wall a second time.

The trail continues in a westerly direction and crosses a wooden footbridge over a large ditch. It then passes the end of the pink-blazed Taconic Bridge Trail that heads to Granite Knolls Park and the bridge over the Taconic State Parkway. After following a woods road, the Old Farm Trail ends at the blue-blazed High Quarry Trail at approximately 3.0 miles. We turned left onto the High Quarry Trail, now heading south. 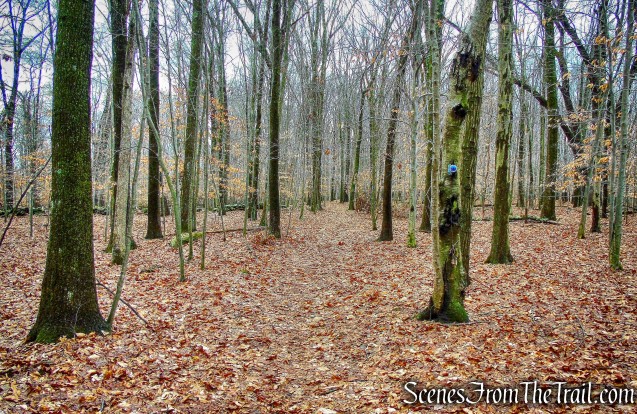 In approximately 360 yards, the blue-blazed High Quarry Trail turns right, joins the red-blazed Sylvan Glen Trail and heads towards the view over the quarry (from earlier in the hike). In about 400 feet, just before reaching that viewpoint, the trails split and we turned left now following the red blazes.

The Sylvan Glen Trail turns left at a huge rock pile and then begins to border it.

The Sylvan Glen Trail heads left uphill along a narrow path and turns around at the end of the knob of the hill. It descends gradually at first and then turns to descend steeply. At approximately 3.8 miles the trail reaches and steeply descends stone steps. These steps were built by the Jolly Rovers, a highly skilled group of Trail Conference volunteers who specialize in rock work. They spent 706 hours to build the 36 steps, moving 21 tons of stone in the process.

A side trail at the bottom of the steps leads 200 feet to the 18-foot circumference Quarry Oak. 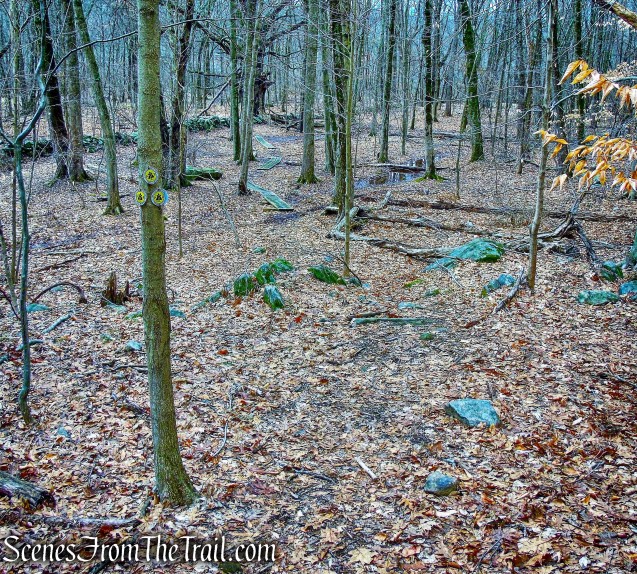 This Oak tree is quite impressive and is also Westchester’s largest aquifer.

The trail leaves the quarry and ends at the Turtle Pond Trail. From there we retraced our steps back along the white-blazed trail. When we arrived at the crossing of Sylvan Brook, I noticed an attractive cascade just upstream which I had missed earlier. We bushwacked a short distance to get a closer look.

Back out to the Turtle Pond Trail, it was an easy and uneventful walk back to the parking area, where the hike began.

A very nice hike which was full of historical features and tranquil woods. A good hike to do when you are short on time or just want some alone time. We passed several hikers going in the opposite direction, but other than that we had the woods all to ourselves. There are a lot of intersecting trails which can be used to form different loop hikes. I would suggest that you print a copy of the map and carry a compass.

Cons: Barking dogs as you pass the dog park at the start of the hike.