Map: Sylvan Glen Nature Preserve Map (Only for the start of the hike)

Disclaimer: Exploring abandoned and/or ruined structures can be dangerous and you could be trespassing. Should you choose to enter the property of any of the places featured on this site, do so legally.

During the late 1800’s, the Mohegan Farm was a local landmark. Located at the South and East side of the lake, from Christine Road to Judy Road, to Sylvan Road, the farm covered 300 acres and produced dairy products, fruit and grains. According to the Yorktown Historical Society, it was owned and operated by William Baker, owner of Baker’s Chocolates, for whom Baker Street is named. Upon doing some research of the history of Baker’s Chocolates, I saw no mention of a William Baker or the Mohegan Dairy Farm. Baker’s Chocolates was founded in Dorchester Massachusetts. Nevertheless there are many old stone walls still standing, the remains of the once great farm are extensive and well worth the visit.

I wanted to check out these ruins last week prior to hiking Sylvan Glen Nature Preserve, but there is no place to park close to the farm ruins. I did a little research using some maps and discovered that by parking at the Stoney Street trailhead, I could use marked trails to get close and then bushwack the rest of the way. With the Nor’easter the previous day, there was still some snow on the trails and the felled trees from the storm had us climbing over and crouching under some huge blowdowns. A relatively easy out and back hike, but better done in the cooler months, when there is less foliage, due to the bushwacking. 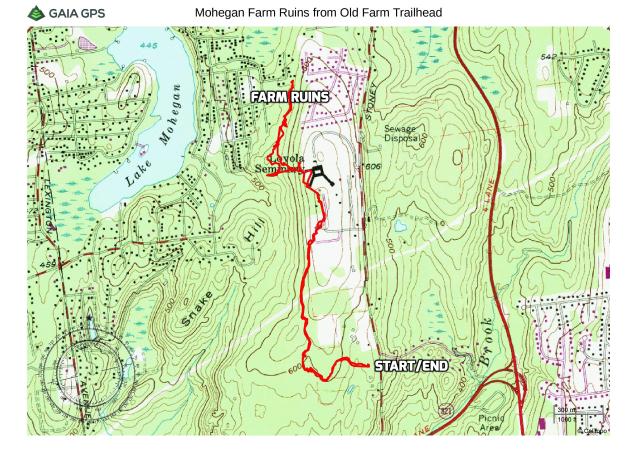 We began our hike on the green-blazed Old Farm Trail, located just off Stoney Street. It is another entrance to the Sylvan Glen Nature Preserve, on its eastern boundary. There were no other cars there as we arrived just after 9:00 am. At the conclusion of the hike, there was one other car in the lot. 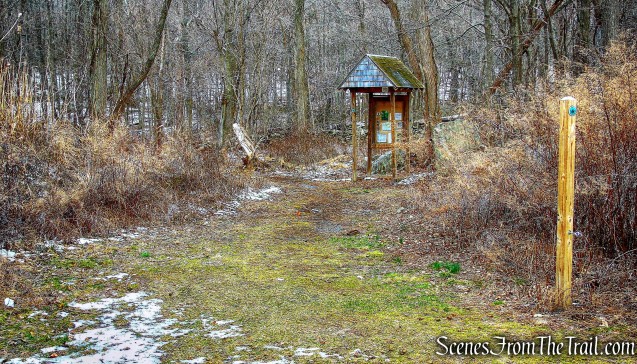 Immediately after the kiosk, the trail travels over a wet area on wooden planks. There was a tree blocking the way, but it was easy to get over it.

Following the Old Farm Trail in a westerly direction, it was mostly free of snow, but there were some blowdowns along the trail.

The Old Farm Trail heads uphill and passes an orange blazed trail to Quarry Drive (no parking). After going through a stone wall, it turns right onto the Ring Trail (yellow), an old riding ring.

In about 100 feet, the Old Farm Trail, departs from the Ring Trail, turns right and passes through the stone wall a second time.

The trail continues in a westerly direction and crosses a wooden footbridge over a large ditch. We had to make our way around the large blowdown on the other side.

Almost immediately after crossing the bridge, we crossed a small stream and came to a junction with the start of the pink-blazed Taconic Bridge Trail. This trail heads towards Granite Knolls Park and the bridge over the Taconic State Parkway.

The Taconic Bridge Trail travels north through stone walls then over a large wet area on wooden planks. We were the first to trek through here on this day except for some wildlife. 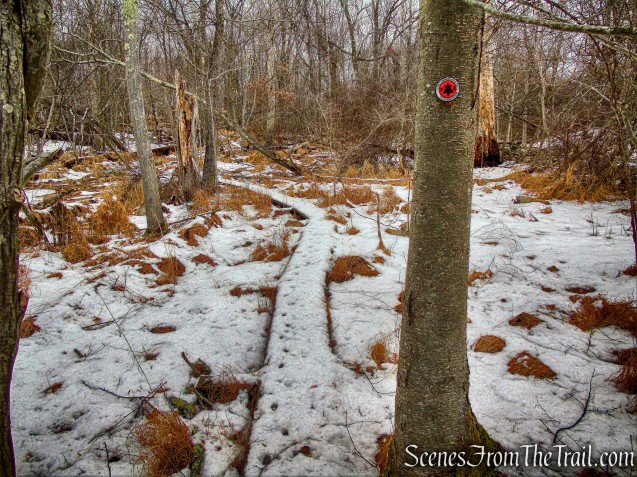 The trail turns left at the northern end of the quarry where we encountered some serious blowdowns. We ducked under some and walked around others.

A massive uprooted tree blocked our path, but we made our way around it. 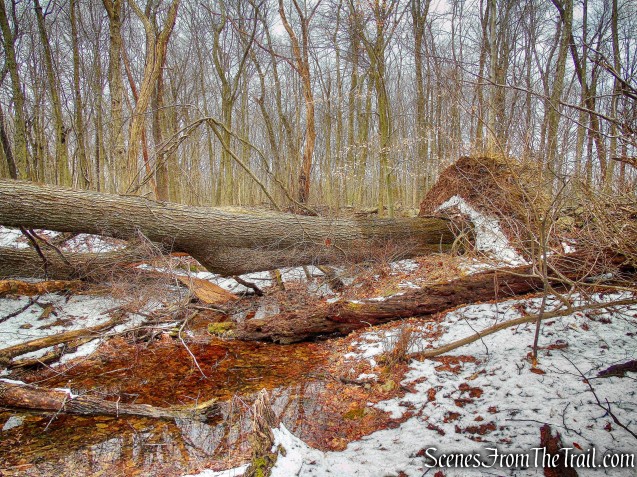 On the other side of the uprooted tree, the Taconic Bridge Trail turns right and joins the start of the white-blazed Seminary Ridge Trail.

The ground in this area was saturated and the trail was swampy. Some fairly new wooden planks along some sections of the trail, made the going easier.

The Seminary Ridge Trail begins to veer slightly to the east and skirts the former Phoenix Academy. It then enters the property and ends.

terminus of the Seminary Ridge Trail

The trail ends by what appears to be a handball court. It was here that we saw the only other person on our hike, a guy on a mountain bike. 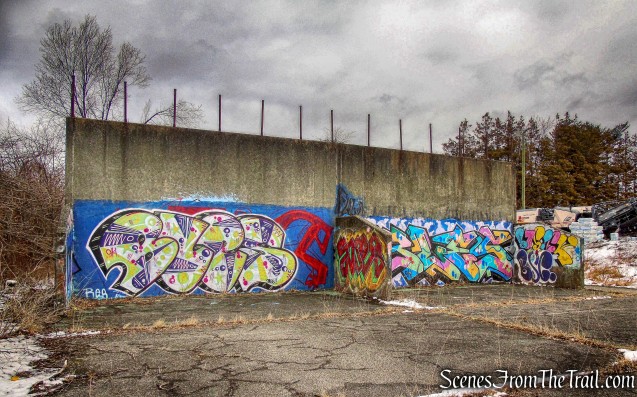 After passing a vacant house and an abandoned inground pool, we then continued heading north on a paved campus road.

We passed what might have been a staff residence and an outbuilding along the way.

This 140-acre hilltop property was most recently the Shrub Oak campus of Phoenix Academy, a substance abuse rehabilitation program for teenagers. Phoenix House acquired it in an auction in 1983 for 3 million dollars. It has been closed since 2015 and it has remained vacant since that time. The campus includes a five-story, 270,000-square-foot building, six houses used for staff residences and several other outbuildings. The main building below, houses dormitories, classrooms, offices and a bomb shelter.

The campus was built in 1954 as the site of Loyola Seminary, which was owned by the Jesuits. The property was later sold to a Bible college before Phoenix House acquired it in 1983.

Shrub Oak International School, a private day school and boarding program for people with autism is scheduled to open here in the fall of 2018.

We walked down behind the building to where there are some basketball courts. I noticed what appears to be an old unpaved road that descends to the west. We walked down that road to see if there were any trails that led north.

The road reaches a small level area, where through the trees, I saw an opening in a stone wall. That was as good a place as any to begin our bushwack north to the farm ruins. As far as bushwacks go, this wasn’t too bad. The occasional massive downed tree and thorn bushes made us change directions and detoured us several times, but it was manageable. We did see a Barred Owl flying through the woods. Much to our delight, it landed in a tree where we could photograph it, as it sat on its perch. 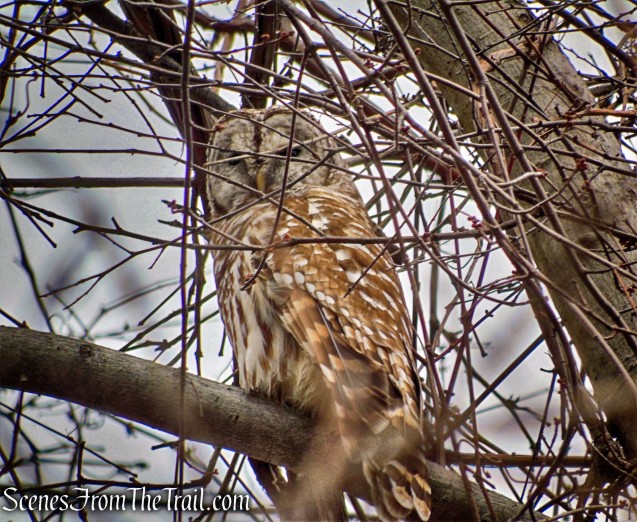 A little further north, sitting on the hillside, are the ruins of a small stone house……

ruins of a small stone house

While sitting by these ruins, I looked to my right (north) and I could make out some stone walls in the near distance. The stone arch of the dairy building came into view as we approached the focus of our hike. 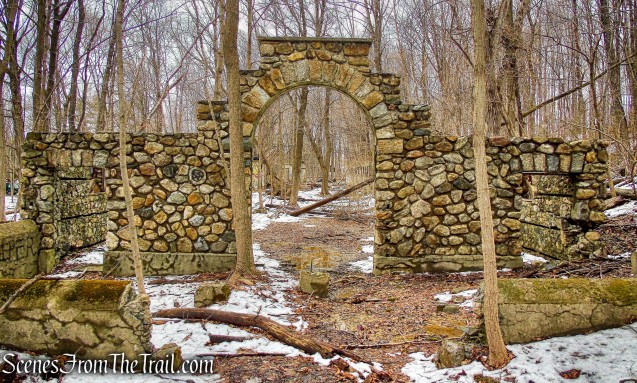 These farm ruins are quite impressive. The closer we got the more striking they became. We walked through the stone arch to get a peek at what remained of this 19th century dairy farm. The walls on either side of the Dairy building extend for a considerable distance.

We walked to the other end and found another ruined structure close by. I believe that this was a general purpose building as it sits near the road.

Although we didn’t see any signs, I am not sure if we were allowed to be there.

An odd sight was the way a tree grew up and around the arch. 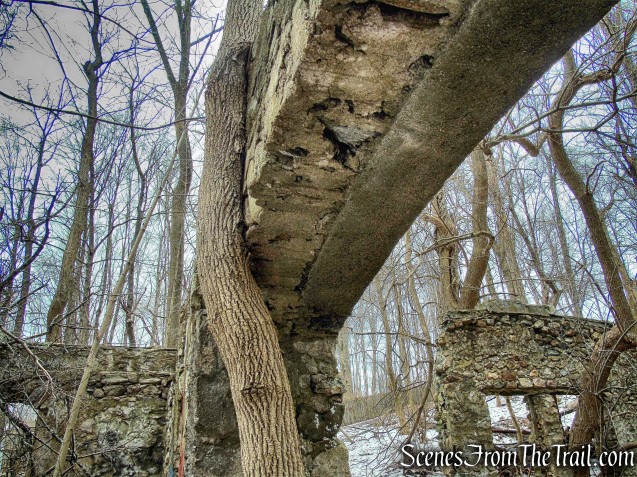 Since this was our turnaround spot, when we were done exploring, we began to retrace our steps back through the ruins. 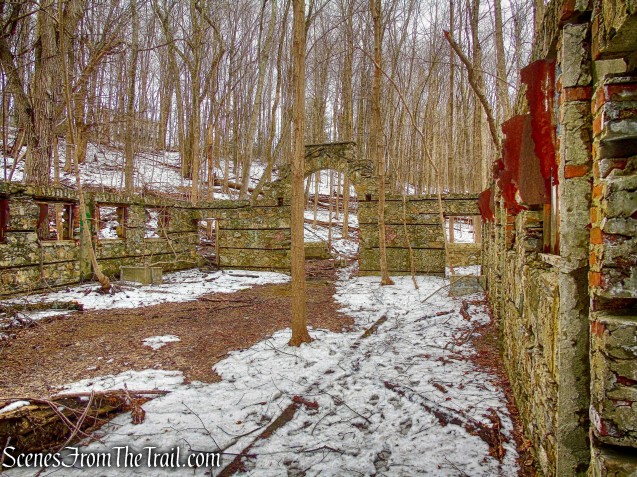 It was a quiet walk back through the woods and through the old Loyola Seminary grounds. Back at the handball court, we took the white-blazed Seminary Ridge Trail south to the pink-blazed Taconic Bridge Trail and turned left (east) on the green-blazed Old Farm Trail. We followed the green blazes back to the parking area on Stoney Street, where our hike began. Lucky for us, someone cleared the tree that blocked the trail when we began our hike.

This turned out to be a pretty good hike considering I slapped it together at the last minute. It had plenty of interesting sights along the way and the sloppy trail conditions made it fun.

One thought on “Mohegan Farm Ruins from Old Farm Trailhead”