Kent Falls State Park is a public recreation area located in the town of Kent, Connecticut, within the Litchfield Hills region of the southern Berkshires. The state park is home to Kent Falls, a series of waterfalls on Falls Brook, a tributary of the Housatonic River. The falls drop 250 feet in under a quarter mile. The largest cascade drops more than 70 feet into a reflecting pool, before traveling over the lesser falls.

Acquisition of the park began in 1919 with the gift of 200 acres by the White Memorial Foundation. Other parcels were donated or purchased until the present 295 acres were acquired. The area was developed in the 1930’s by the Civil Works Administration. In the mid 1970’s, considerable trail reconstruction was done by the Youth Conservation Corps of Connecticut. The covered bridge is an authentic reproduction built in 1974 by a park employee, Edmund Palmer.

I was looking to get out of New York for the day and decided to take a cruise into Connecticut. There are many great state parks in Connecticut and I have visited a few of them. With all the snow on the ground, I wanted to keep the hike short, but interesting. Kent Falls State Park has two short marked trails and a series of steps that climb steeply along the falls. On the way there I made a couple of stops to view two historic covered bridges. The first bridge I saw was Bull’s Bridge, which was built in 1842.

The 109 ft. bridge was built with a Town lattice design and has reinforced trusswork visible on the interior. 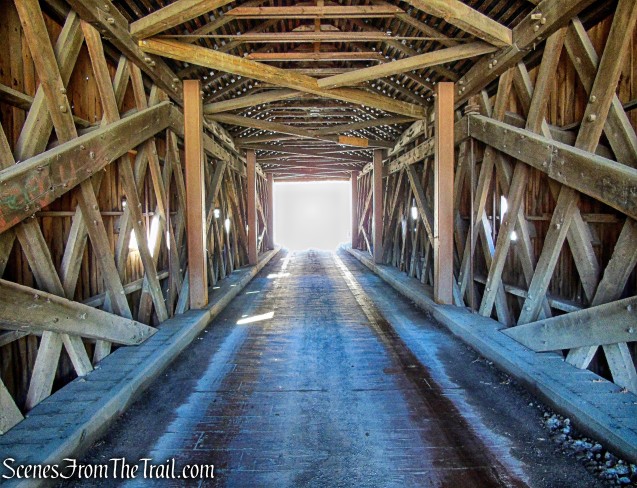 Bull’s Bridge spans the Housatonic River and the view through one of the portals shows the the waterfalls and rapids created by the hydro-electric power plant upstream. 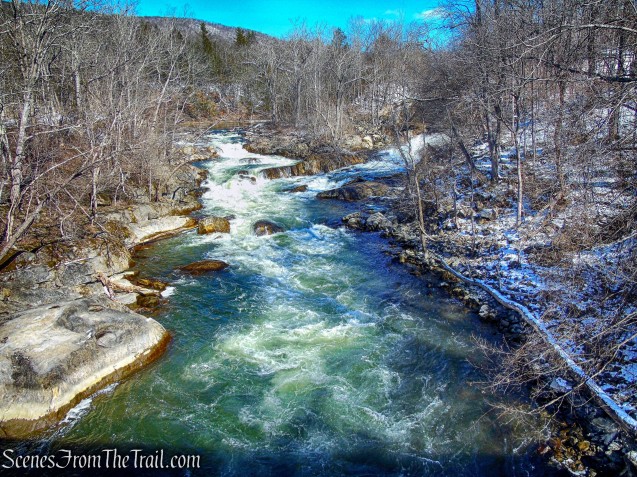 We then continued on our way, driving past Kent Falls State Park and visiting West Cornwall Covered Bridge, which after earlier versions were destroyed, was constructed circa 1864.

The bridge’s Town lattice truss is constructed of red-spruce timbers secured by treenails (a hard wooden pin used for fastening timbers together) and the span is made of native oak.

The West Cornwall Covered Bridge, which spans the Housatonic River, is 172 feet long, 15 feet wide and supports one lane of vehicle traffic for the Sharon-Goshen Turnpike (Connecticut Route 128). 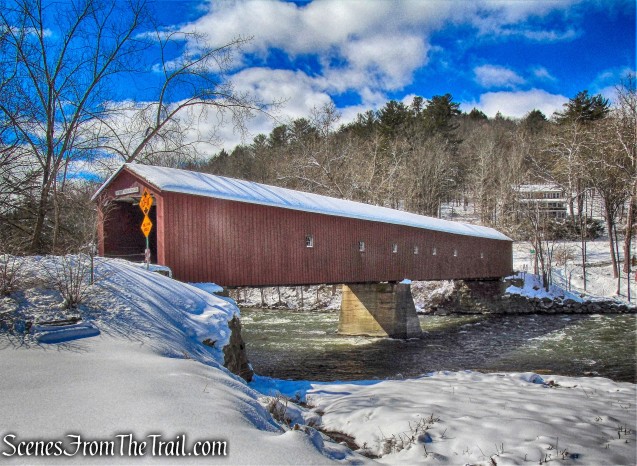 The cool thing about these two bridges is that they are both open to vehicular traffic. After the slight detour, I then turned around, drove through the bridge again and made my way to Kent Falls State Park where I was greeted with yet another covered bridge.

The hike begins by walking through the bridge that spans Kent Falls Brook. The Kent Falls Covered Bridge is a one span Town Lattice Truss with a total length of 37 feet.

The covered bridge is an authentic reproduction, built in 1974 by a park employee, Edmund Palmer. 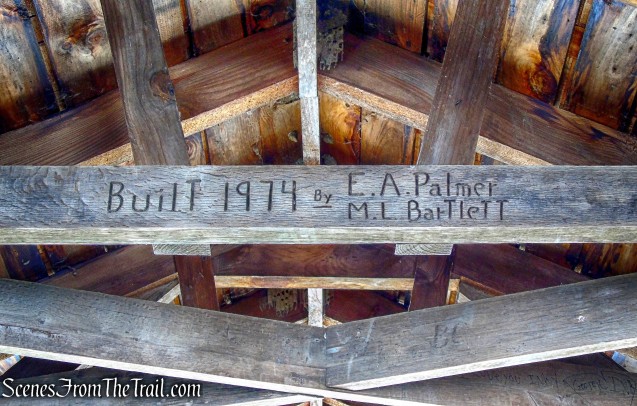 I proceeded ahead towards the falls on the freshly packed path. I was wearing Hillsound Trail Crampons for better traction since I knew I would be ascending steeply along the side of the falls. The spikes are just a little longer and much sharper than the Kahtoola MICROspikes, which I normally wear. 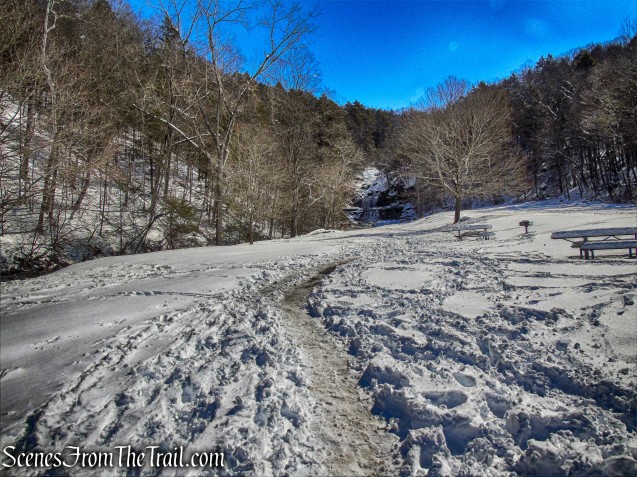 After a short walk, I arrived at the base of the falls which is quite stunning in any season. Like most waterfalls, the flow is normally heaviest in the spring when the winter snow is melting.

After admiring the falls for a few minutes, I proceeded up the stone steps past a stone viewing platform.

I then began to tackle the steep steps alongside the falls. It is steep, but the stairs and the railings make it less challenging. 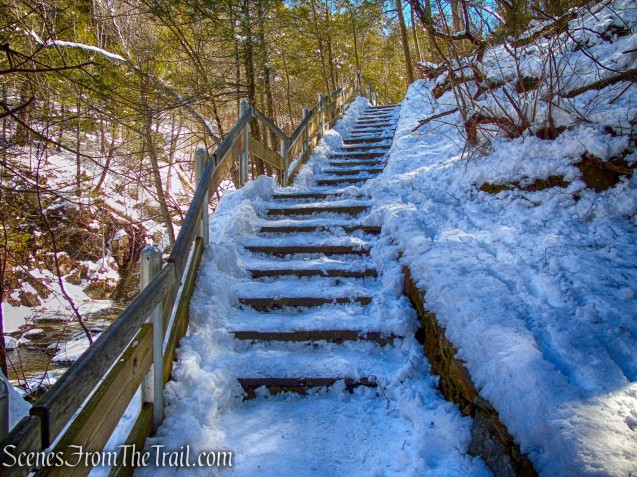 The well constructed viewing platforms along the way are a nice touch and also gave me an excuse to stop.

There are several platforms on the way up which afford a nice view of the different cascades as they drop into the different pools. 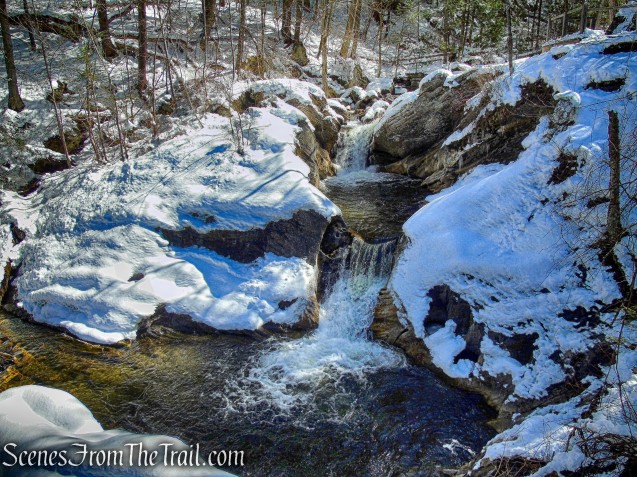 A few of the pools look like great wading holes, in the warmer weather of course. 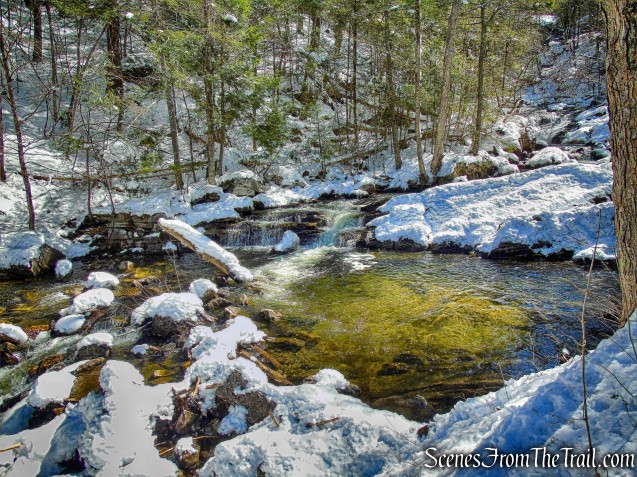 As I neared the top, I found this snowman that someone had built, on one of the platforms. 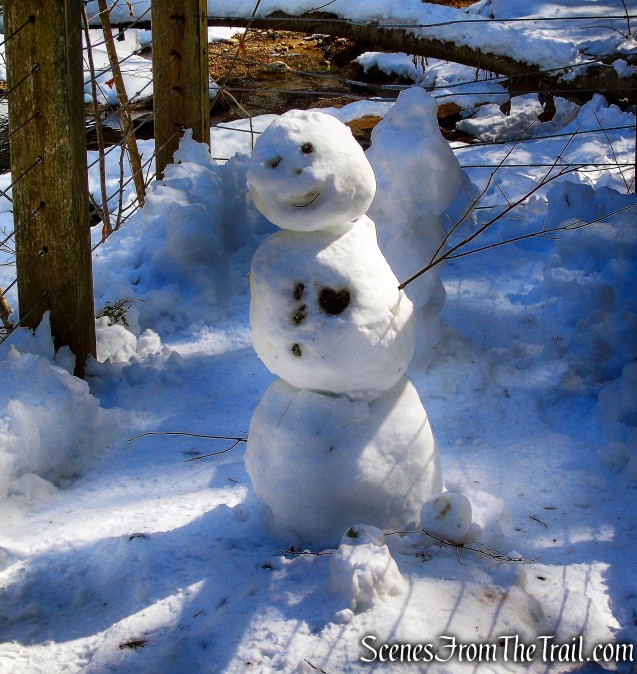 The steep climb is definitely worth the payoff, as each cascade is different and the area along the falls very scenic. 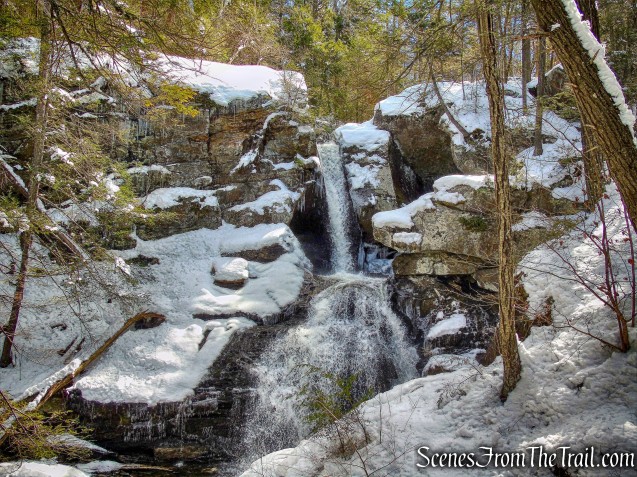 When I reached the top, there were two young ladies having a picnic on the viewing platform. I thought that it was pretty cool.

Another nice cascade can be seen from the uppermost viewing platform.

After enjoying every cascade that Kent Falls has to offer, I proceeded up the hill to find my way to the other side of the falls. There are no blazes to lead the way, but I followed the trail left behind by a previous hiker.

The trail travels around a large rock formation then leads back towards Kent Falls Brook (which feeds the waterfall) and to Dugan Road.

I continued towards the road and there is a wooden post indicating the direction of the North Ridge Trail. According to the map, the Kent Falls Trail ends here.

I crossed over to the other side of the brook on a bridge on Dugan Road.

I stopped on the bridge for a minute to check out Kent Falls Brook before it flows under the bridge and over the falls. 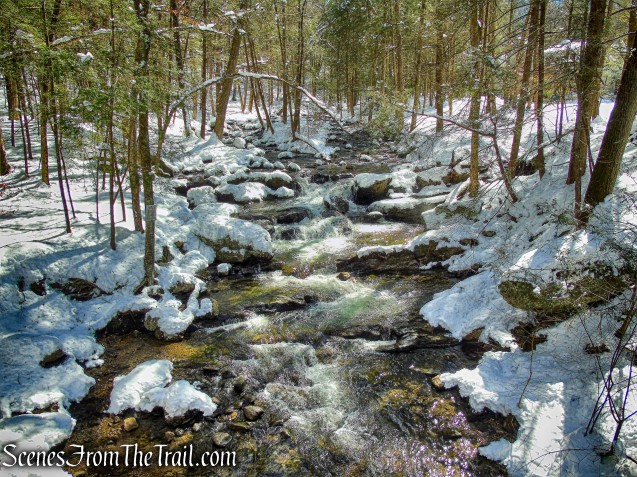 Immediately after crossing the bridge, there is a red blaze on a tree that marks the start of the red-blazed North Ridge Trail. The trail descends gradually along the north side of Kent Falls. There are no views of the falls from this trail. 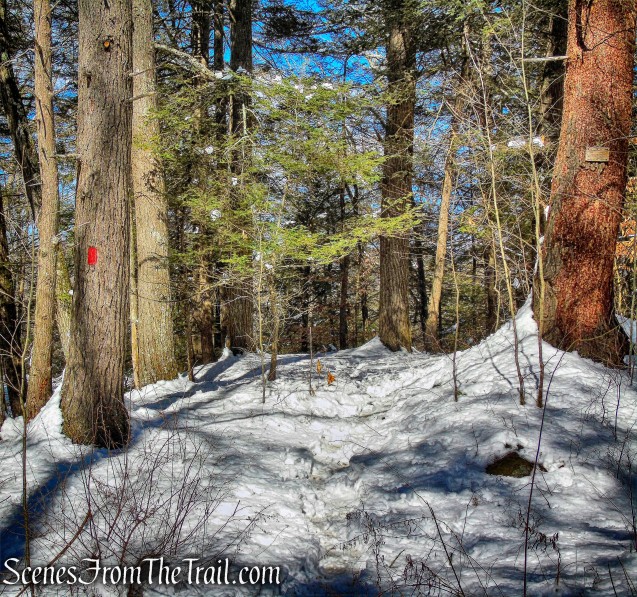 The North Ridge Trail begins heading north through the woods then veers slightly to the west. There is a yellow-blazed trail that goes off to the right, but I didn’t see it. I wasn’t planning to hike that trail anyway. According to the map, the Yellow Trail heads northeast then veers to the left and heads southwest to meet up with the North Ridge Trail (red) as it nears the parking area. 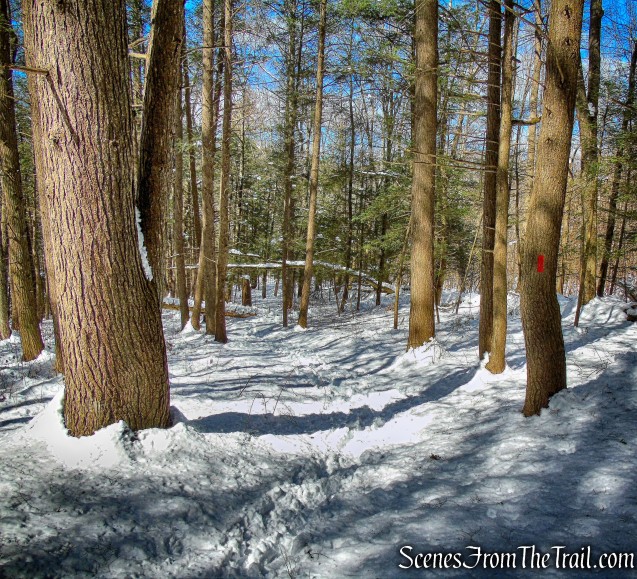 The blazes are rather sparse in this area and I got so caught up following the tracks through the snow that I lost sight of the blazes a couple of times. It appears that the previous hiker wandered off the trail several times and I followed right along. Nevertheless, I wasn’t worried and found my way back to the trail. The trail follows the edge of a steep drop off at times, but nothing severe. 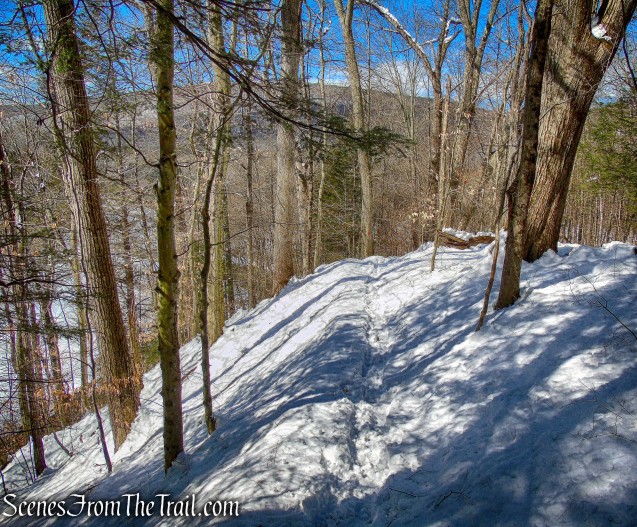 The trail then descends more steeply as it nears its terminus at the northeast end of the parking area. 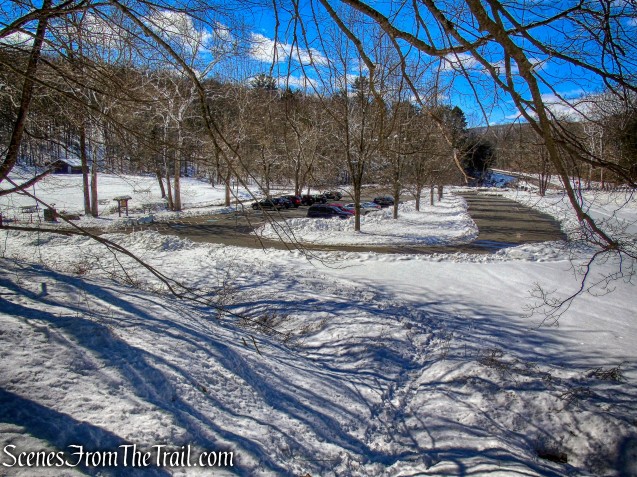 Although it was a short hike, it got my blood pumping. The extra effort that I had to put in walking in the snow was enough exercise for one day. I took a short rest enjoying my surroundings before I hit the road.

All in all it was just the hike I was looking for. The scenic ride on the way here made it that much more enjoyable. I love covered bridges and their historical past and always worth visiting, if in the area. On my way back to Westchester County, I stopped at an antique locomotive that was parked on the tracks by the side of the road.

Argent Lumber Co. Engine #4 is a narrow gauge (3-foot) steam engine built by Porter in 1909 for the Dennis-Simmons Lumber Co. in Wilson, NC, later sold to the Argent Lumber Co., in Hardeeville, SC. In 1960 it was sold to Edaville Corp. This locomotive was purchased from Edaville by Dr. Richard May in 1991 and later sold to Connecticut Antique Machinery Association (CAMA) in 1994. 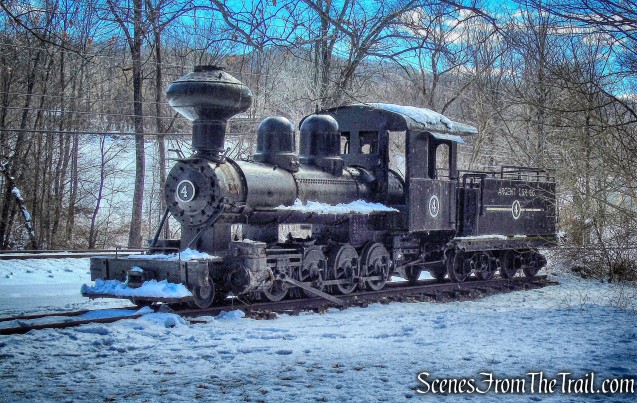 As it turned out, this was basically a cruise in the country with a hike thrown in to stretch the old legs. I subscribe to the theory that if in the area, you might as well visit it because you never know when you’ll be back there, if at all. I accomplished that on this day. I hope that you enjoyed my journey in Connecticut and don’t forget to get out there and take a hike!

Cons: trails could be better blazed.