New York State acquired the abandoned Copake Iron Works in 1928 when Taconic State Park was formed. In 2007, the Iron Works site and 18 acres surrounding the area were listed on the State and National Register of Historic Sites. Friends of Taconic State Park, established in 2008, has accomplished much important preservation work at the site.

We recommend starting your visit at our Visitors Center and Museum (#6), open year round during daylight hours. Docent guided tours of the Iron Works Museum adjacent to the Visitors Center are available from 2pm to 4pm, Saturday, Sundays and holiday Mondays from Memorial Day through mid-November, or by appointment.

The brick building (Visitors Center) on the left was once the Blowing Engine House. Blowing engines are used to provide the air blast for furnaces.

On the right (Museum), was once the Machine Shop. On display are a series of iron artifacts, ranging from plow parts to chisels and unknown objects. Each one has been cataloged by the local historical society.

The Visitor Center, adjacent to the Iron Works Museum, includes a highly detailed diorama of the Town of Copake Iron Works (as it was known until the turn of the century) and extensive interpretative displays about Taconic State Park and the nearby Bash Bish Falls.

The Iron Works Heritage Trail, described on the map, is an easy and scenic hike to Bash Bish Falls. There are two options for your return to the Iron Works: easy (return the way you came) or strenuous (return via the trail that runs west above Route 344).

From this point, a 1/2 mile-long trail leads to the lower Bash Bish Falls parking lot. From there, it is another 3/4 mile to the base of the falls. Along this trail you will see old railroad abutments and ponds that served the Copake Iron Works. 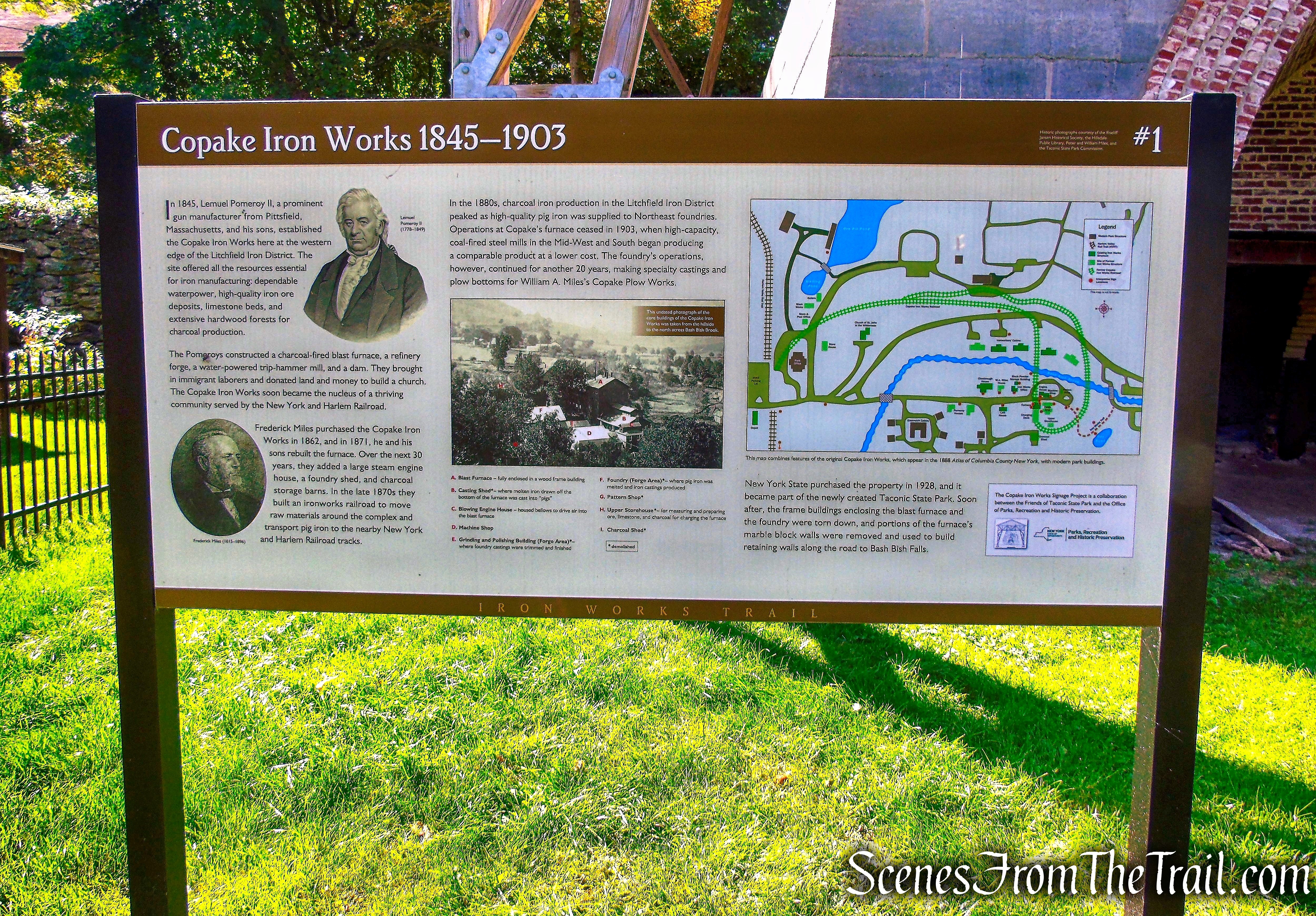 The centerpiece of this extraordinarily intact 19th century industrial complex is the rare Copake Blast Furnace with its water jacket hearth.

In its heyday, a total of 5,000 tons of iron ore were wheeled into Copake Falls each year from surrounding towns such as Pawling and Amenia.

Black Powder Storage Building (#15) – This building was likely constructed in the 1870’s, but may date back as early as the 1850’s. Built to store black powder that was used for blasting iron ore from bedrock, its wooden roof rests on top of brick walls, thus allowing any explosion inside the store room to direct the force upward rather than extend outward where it might do more damage to people and buildings in the area. 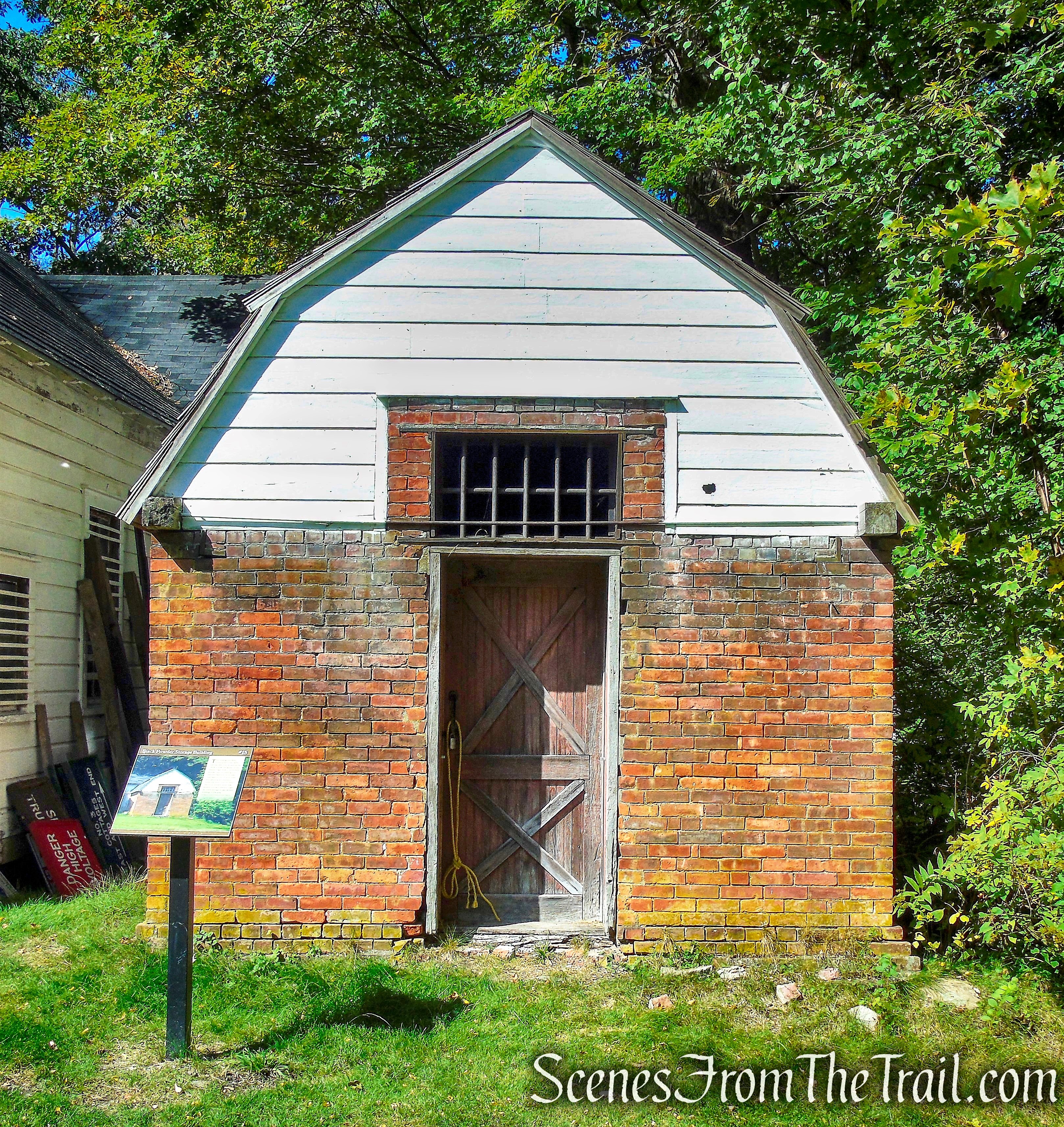 Iron Works Ofﬁce & Company Store (#14) – The original portion of the Copake Iron Works Office has vertical board-and-batten siding and dates from at least 1858, when it first appears on maps. It is likely however, that it is one of the original structures built in 1845 by Lemuel Pomeroy II for conductiong business. Its gabled wing may have been added between 1873 and 1888 to serve as a company store. 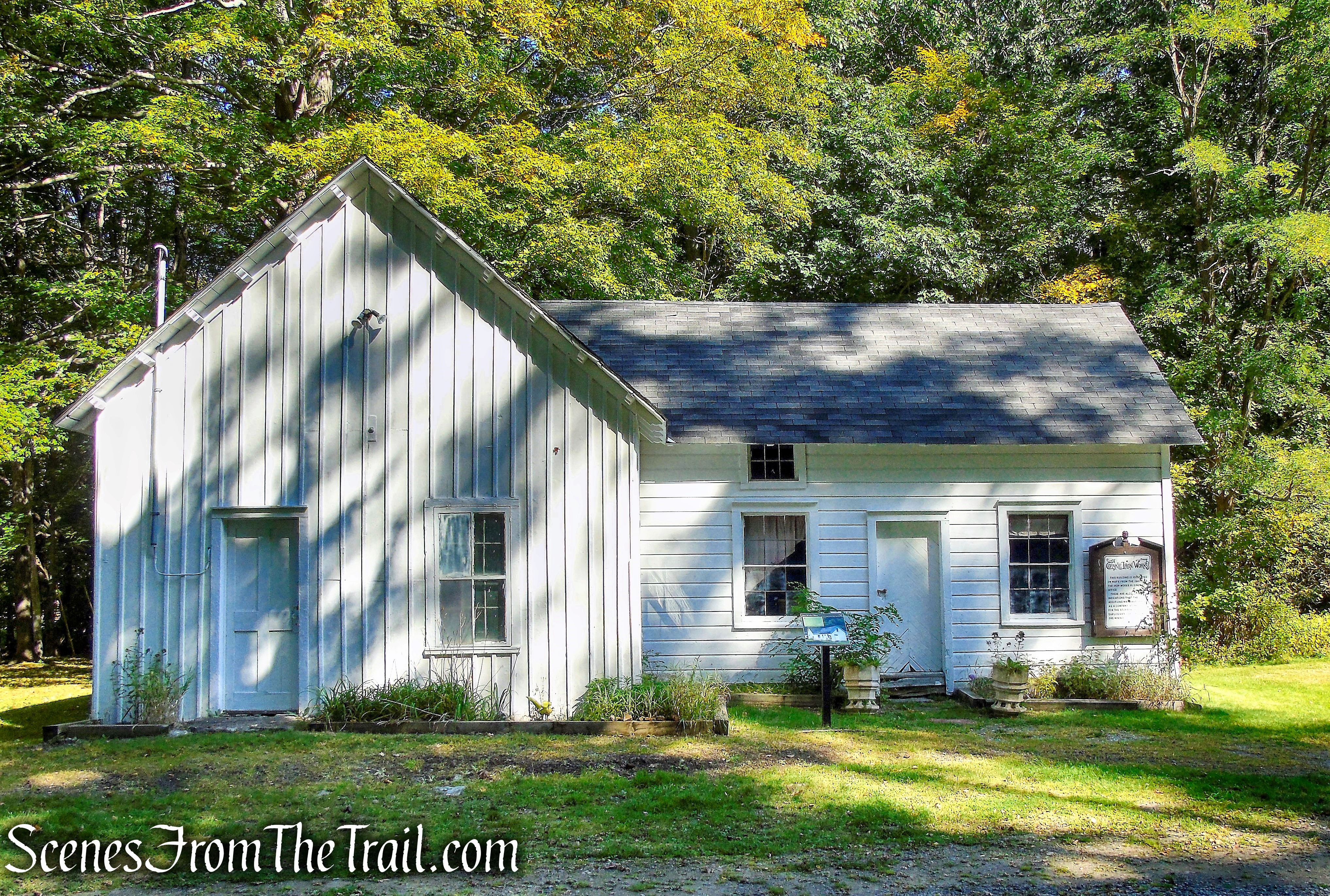 Link House (#18) – This residence for Copake Iron Works employees likely dates to the 1860’s. Its last residents, Oscar and Lyman Link, continued to live in the house even after New York State acquired it and the surrounding property in the 1920’s. 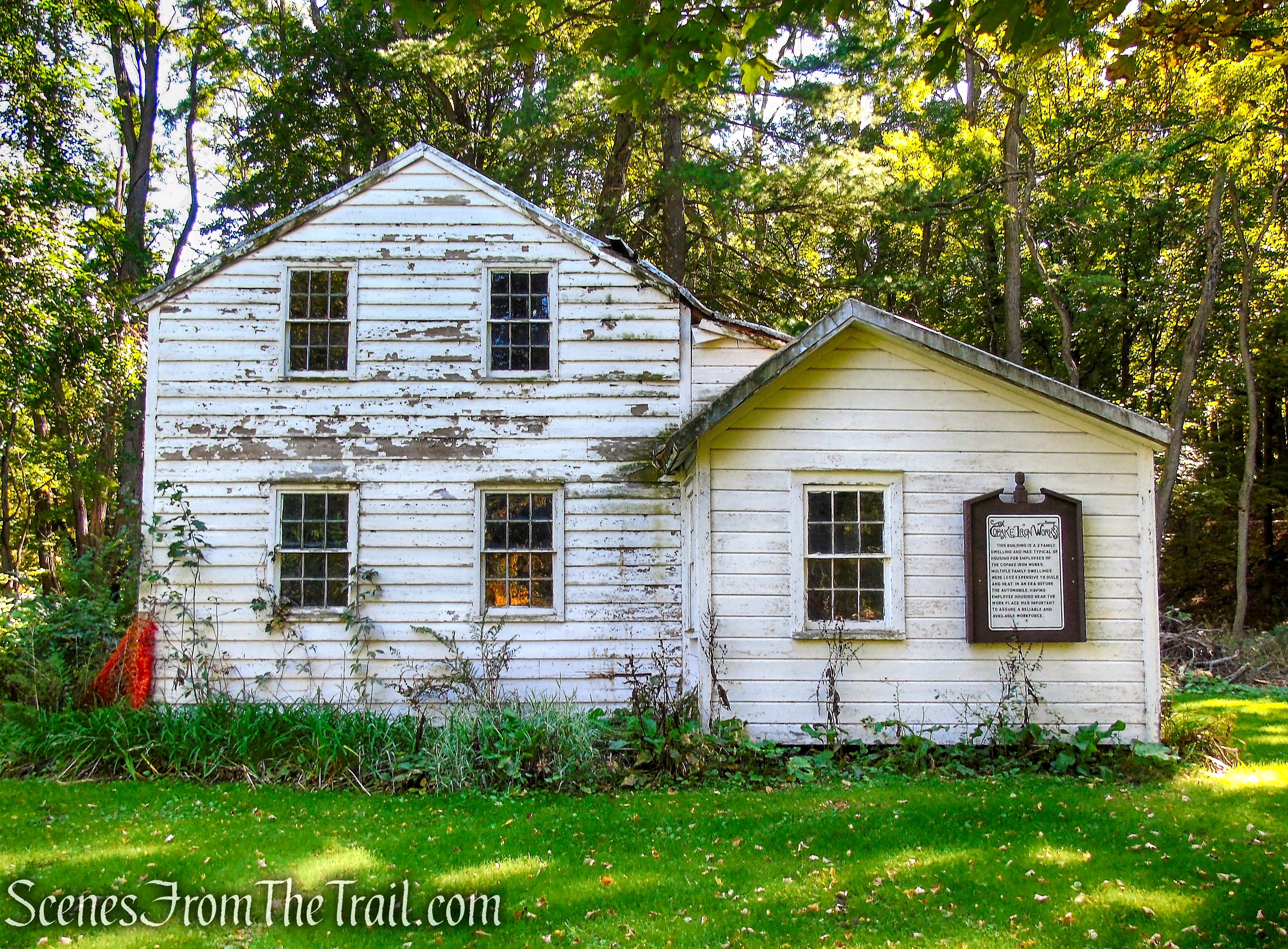 There are numerous other points of interest located at the Copake Iron Works that are worth checking out.

Also located within the Copake Iron Works Historic District is the Church of St. John in the Wilderness. It is located at 261 Route 344 in Copake Falls, NY 12517 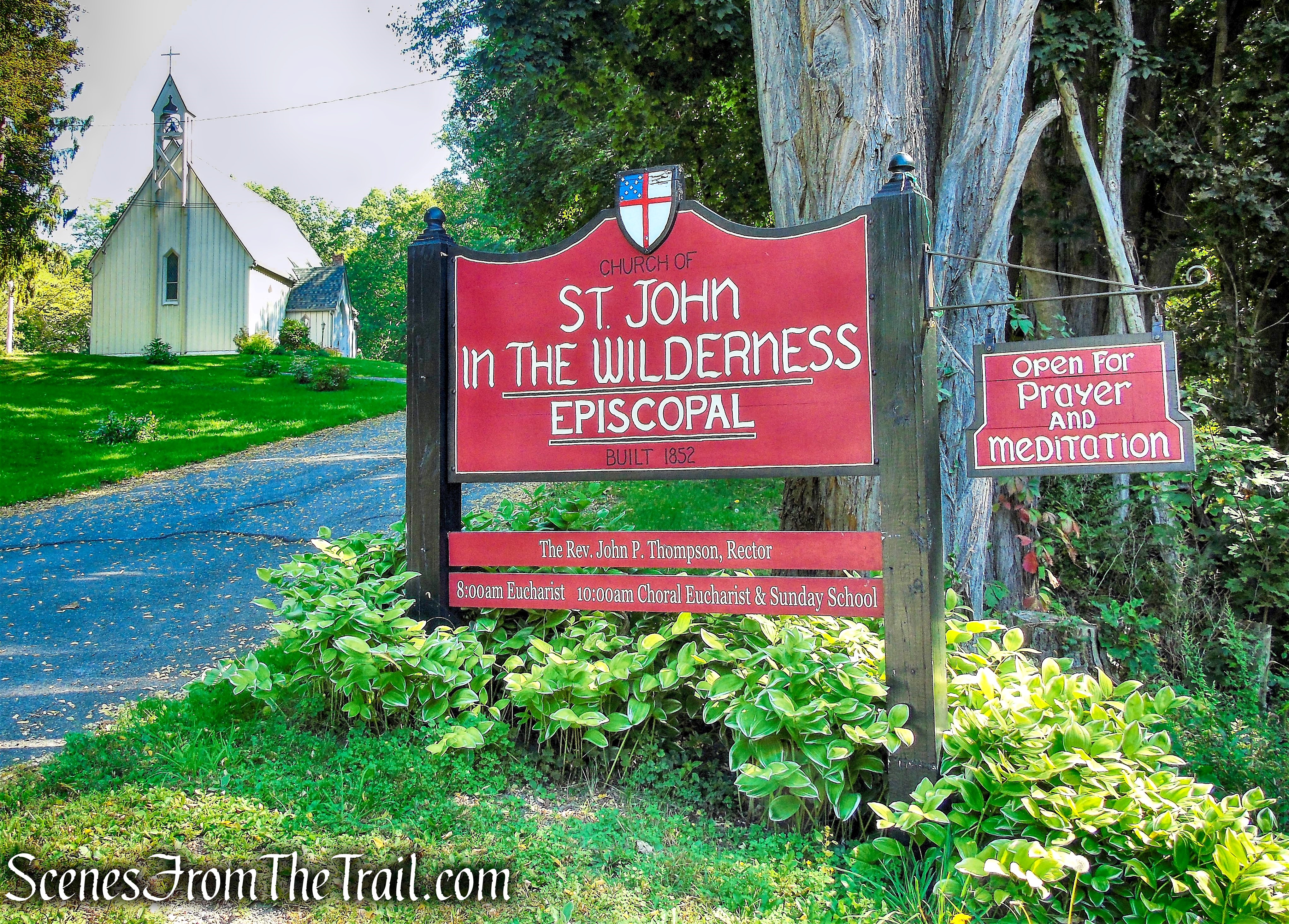 The church, designed by Richard Upjohn, is a one-story wood frame building clad with board and batten siding in the Gothic Revival style. Built in 1851, it was consecrated on June 29, 1852. The building is of much historical interest, for Upjohn designed many other churches, the most famous of which is New York’s Trinity on Wall Street.

The Church of St. John in the Wilderness has been a vital part of the village of Copake Falls and the surrounding region for more than 150 years. Some members of the early church were farmers, but many were involved in mining and smelting the iron ore deposit, just west of the church. Thus, the early history parallels that of the Copake Iron Works, which was established in 1845 by Lemuel Pomeroy of Pittsfield, Massachusetts. 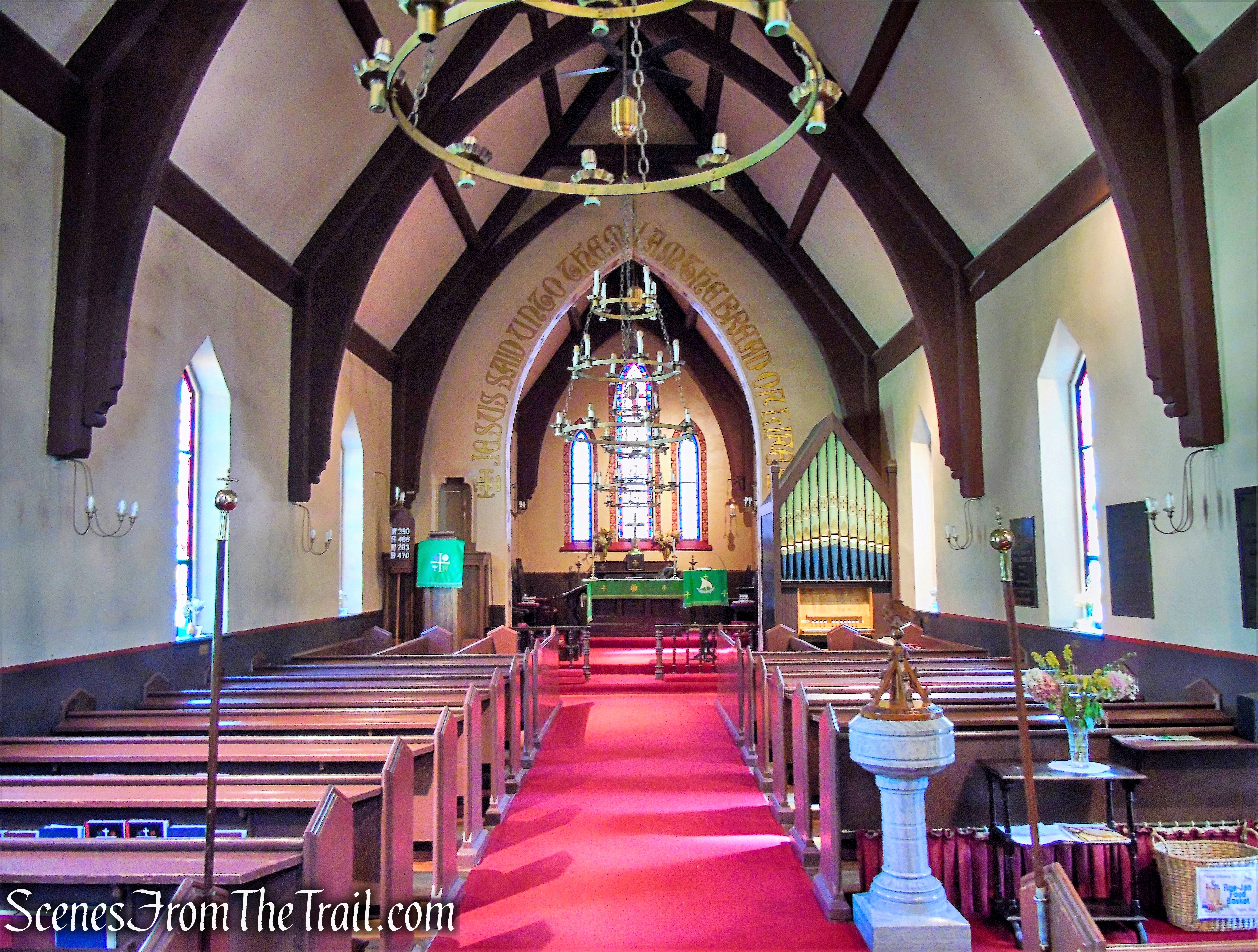 Copake Iron Works and the Church of St. John in the Wilderness is just down the road from the park entrance of the 7,000-plus-acre Taconic State Park, with its visitor welcome center located on Route 344 in Copake Falls, New York. The Harlem Valley Rail Trail, great for biking and on foot travel, passes through the park, which is also equipped for camping, with tent sites and cabins. The three-mile loop trail that circumnavigates the Copake Iron Works Historic District connects to other trails in the area, making any number of loop hikes of various lengths possible.

Staying for a few days at Lake Taghkanic State Park, we were looking to visit places that were nearby. We had just done the short hike to Bash Bish Falls and decided to stop by Copake Iron Works and the Church of St. John in the Wilderness, which is just down the road from the Bash Bish Falls NY Trailhead. The historic significance of this site, makes it worth a visit if in the area.