Prior to becoming Blauvelt State Park, the property was known as Camp Bluefields, a large rifle range used primarily to train members of the New York National Guard. The rifle range occupied 335 acres of land and was touted in 1910 as being the largest in the country. The range’s location was criticized almost immediately, and complaints of stray bullets being encountered in nearby residential areas were registered even before the range’s official completion. The rifle range operated from soon after the state’s initial purchase of the land in 1909 until its administration was transferred to the Palisades Interstate Park Commission in 1913.

In the years that followed, Camp Bluefields was used as a YWCA summer camp for New York City working women, an ROTC training camp, a Columbia University summer camp, and as a destination for participants in the Fresh Air Fund. In 1930, the camp resumed military use by the U.S. Army, who used the property for training programs that year. In 1942, soldiers from Camp Shanks used the property as a training grounds, and it was used as an air raid post during World War II.

Blauvelt State Park (536 acres) is a largely undeveloped park with no facilities other than hiking trails and limited parking. “Blauvelt” is Dutch for “Blue Field” or “Blue Grassland.” The park links with several other town and county parks, including Clausland Mountain County Park, Buttermilk Falls County Park, Tackamack Park and Schuyler/Bradley Town Park, creating a largely seamless park range on the Hudson Palisades.

I wanted to do a short hike/exploration on Thanksgiving morning that wasn’t too far away and this one fit the bill. I visited Camp Bluefields before and it was worth a return visit. Long the source of rumors of demonic goings on and horror stories, I was not deterred. I have read that dead bodies, victims of homicide and/or suicide, have been discovered in the area. Satanic rituals were commonplace at one time and the graffiti covered walls and tunnels seem to reflect that. I have also heard that the police don’t like to go up there. The Long Path travels through the area and actually passes right over one of the tunnels. There are numerous unmarked or unofficial trails that branch out from the Long Path, that one could explore. On this day we did a short 3 mile out and back hike and spent more time exploring the area around the tunnels than actual hiking.

The hike started at Tackamack Town Park where there is ample parking. The Long Path crosses Clausland Mountain Road (Rockland County Route 28) and continues through the parking lot and into the woods. 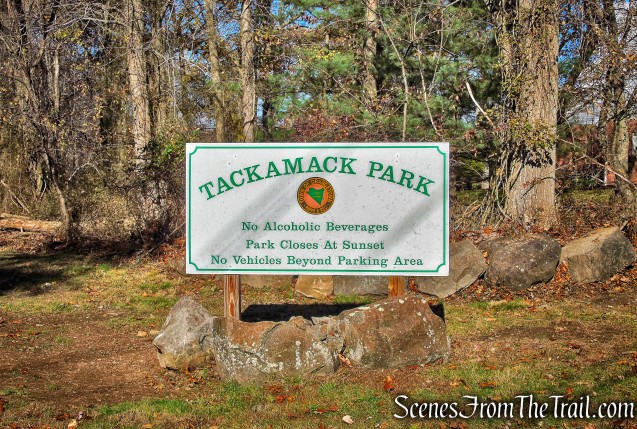 The aqua-blazed Long Path is the only official trail in the park and it leads right to the tunnels. In fact, it passes right over one of them. It starts off on an old woods road, descends and crosses a pond on a wooden footbridge then climbs slightly and reaches Marsico Court, leaving  Tackamack Town Park. After crossing the road, the trail ducks into the woods and enters Blauvelt State Park. The Long Path then passes several junctions, including a bike path and it’s pretty much a straight shot until reaching the tunnels.

These concrete tunnels were originally used to get around the rifle range without being shot.

The tunnels are long and quite dark, but we brought our headlamps with us to light the way.

The spider crickets were huddled together, possibly to stay warm, but they were also spread out along the ceiling. Given their limited vision, spider crickets will often jump towards any perceived threat in an attempt to frighten it away. They were a little jumpy as we walked by.

The tunnels seem to spread out for miles and there are some free standing buildings as well. 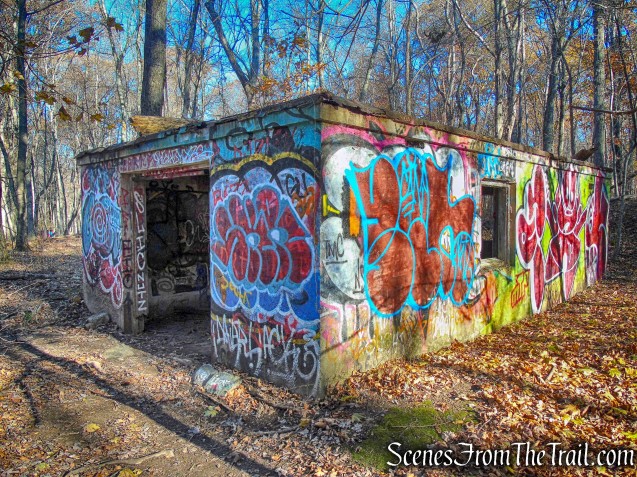 Of all the tunnel entrances, the one with the tree growing around it, is the most interesting.

The walls that held the targets are about 10 feet high and about a foot thick.

Overlooking the Hudson River meant shooting east, into the rising sun. The shooters often missed the targets, sending stray bullets over a ridge and hitting houses in the villages of Grand View and South Nyack.

Some of the tunnels are below ground and appear as a berm that serve as a path.

Others are above ground and are just over 6 feet in height on the inside.

We spent a few hours walking around and exploring the area. We didn’t encounter anyone while we were there either, but then again, we were there early. Please remember: Exploration of abandoned places always has its dangers. These dangers include squatters, critters, collapsed floors and ceilings, toxic mold, and carcinogenic fibers from old insulation. Please take the proper safety precautions if you decide to explore and don’t go alone.

To get a better idea of what the hike is like, view the short video below, with additional images added.