Please note: Hikers should use caution in the vicinity of the mines, as their deep water filled pits and unstable overhanging rocks can be dangerous.

I designed this hike around Pine Swamp Mine. It was originally a 3 mile hike, but it felt too short so I extended it. The image below shows the figure 8 loop that we hiked. The bottom half of the “eight” represents the original 3 mile hike and the upper half is the extended portion I added on. The lower half can be hiked on its own for a shorter loop.

A shorter similar version of this hike can be viewed HERE.

Below is a Google Earth image of the trails and points of interests on this hike. We hiked this loop clockwise and bearing left at the center towards Times Square.

After all the rain throughout the week it was nice to have some dry weather. It was mostly cloudy with temps in the mid to high 60’s on this Saturday morning. Although the weather was dry, the trails weren’t. All the rain that fell caused the trails to be swampy and in some cases flooded. Thank god for waterproof boots.

We arrived at the parking area at about 9:15 am and the lot was nearly full. This parking area tends to fill up early on weekends and it was maxed out by the time we returned. We began our hike at the northwest corner of the parking area, picking up the aqua-blazed Long Path just to the left of the kiosk. To the right of the kiosk is the inverted-red-triangle-on-white blazed Arden-Surebridge (A-SB) Trail, which would be our return route.

northwest corner of the parking area

The Long Path begins along the northern shore of Lake Skannatati with views of the lake alongside the trail.

In about a 1/2 mile, the Long Path veers away from the lake and goes deeper into the woods. 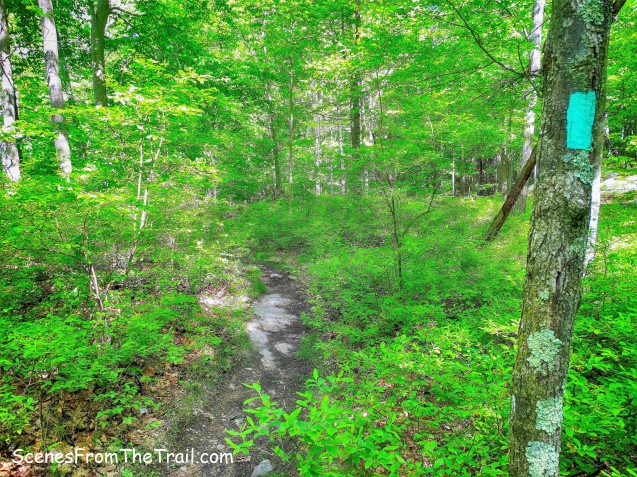 and some swampy sections that resemble stream crossings.

The Long Path then crosses Pine Swamp Brook on rocks…..

and passes by a massive rock formation.

After about 1.3 miles from the start of the hike, we came to a T-intersection with the yellow-blazed Dunning Trail. We turned right onto the Dunning Trail, a grassy, mostly level woods road. 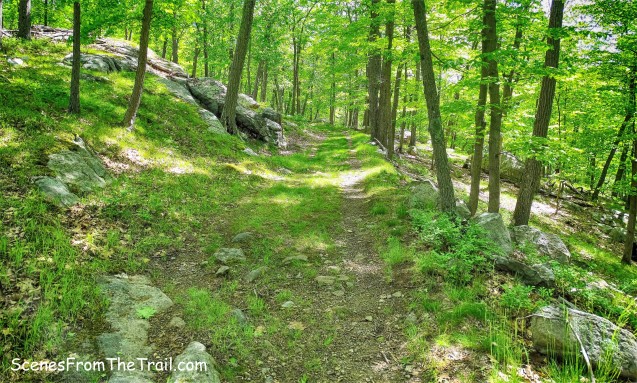 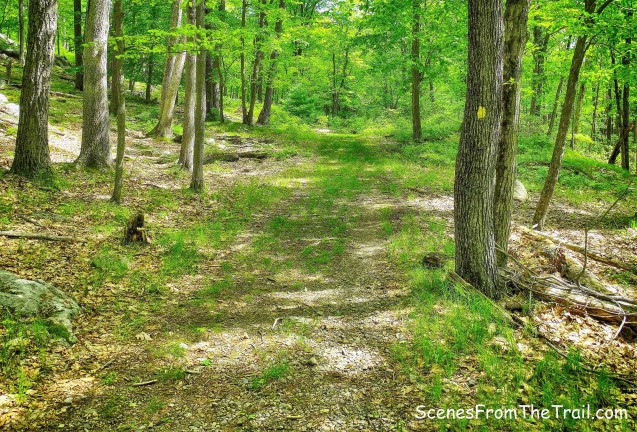 In about a 1/2 of a mile from the point where we began on the Dunning Trail, we came to Pine Swamp.

An area of the the Dunning Trail alongside the swamp, was a little flooded. We had to step on logs and walk along the hillside to keep our feet dry. We were looking for a footpath that led up the hillside to Pine Swamp Mine. I stopped right by the footpath to ask a couple of hikers that were going in the opposite direction if they knew where the mine was. When I mentioned that there was a trail that that leads up the hill to it, the man said “is that it?” and pointed to the trail beside me. I think I would have noticed it anyway, but was appreciative of his assistance.

The trail climbs steeply for about 50 feet to a level area, where there were a few people standing. Seeing people there was indicative that I was in the general vicinity of the mine. This mine is a large open cut about 100 feet long and forty feet wide, with vertical walls seventy-five feet high.

Walking into the cut and looking to the left, I could see the mine adit behind 3 large trees. We exercised caution as we got closer for a better look. In areas where there has been mining activity, there are usually water filled pits that could be quite deep. Exploring in and around mines can be dangerous. 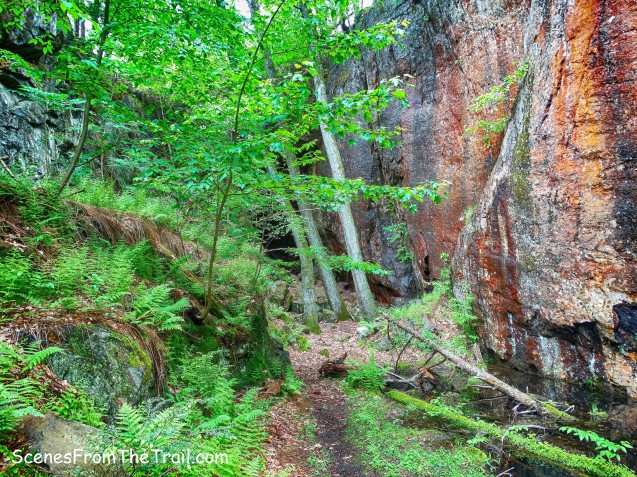 At the southern end of the cut, there is an adit or opening to a horizontal passage that extends some 125 feet into the hillside. This passage slopes upward, and above its far end is an air shaft opening to the surface. Moving past the trees that stood guard at the opening, we were able to get a good view of Pine Swamp Mine. 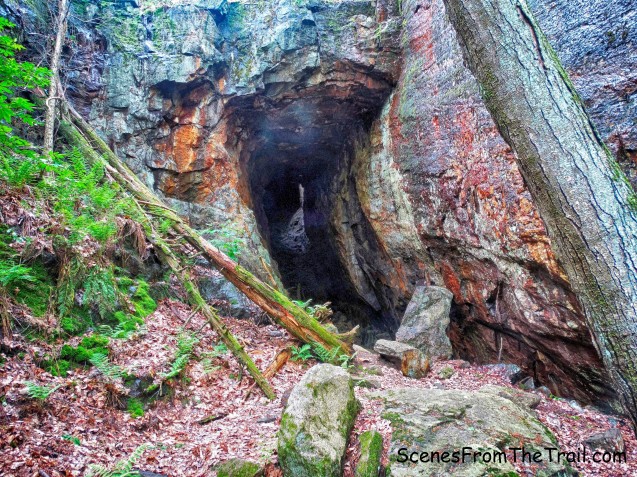 Below is an image of me standing in front of Pine Swamp Mine so you can get an idea of the size of the adit. Pine Swamp Mine began operations circa 1830 and was worked intermittently until 1880.

I stepped inside briefly to look around, but did not venture too far in.

A rectangular water-filled shaft containing the remains of timbers, is located along the bottom of the west wall of the open cut. 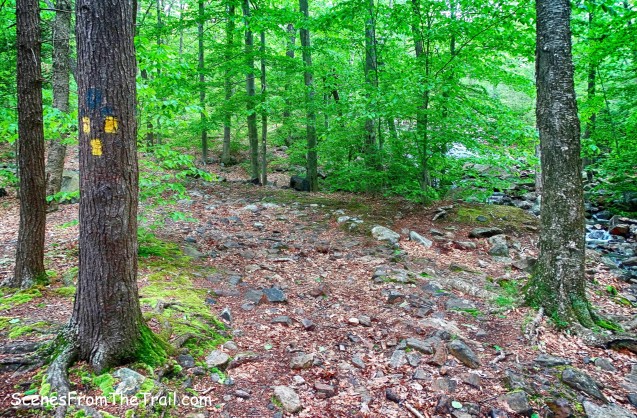 terminus of the Dunning Trail

Here the Arden-Surebridge (A-SB) Trail forms a T-intersection with the end of the Dunning Trail. There is a picturesque cascading stream here and we took a short break. 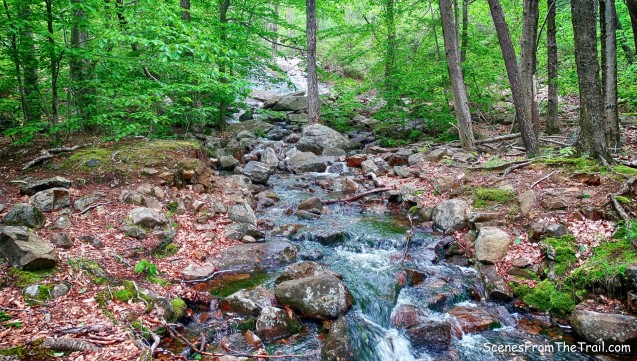 The A-SB Trail crosses the stream here and about 100 feet on the left is a large rectangular cut in the hillside that is 118 feet long and twenty-nine feet wide, with vertical rock walls that are about twenty-two feet deep. This excavation is part of the Pine Swamp Mine complex.

We recrossed the stream and began heading west on the A-SB Trail. The Arden-Surebridge Trail is marked with inverted-red-triangle-on-white blazes. The trail was blazed in the Summer of 1921 by J. Ashton Allis, who was the president of the Fresh Air Club for many years and a veteran hiker and trail builder.

This section of the A-SB Trail runs on an old mining road, called Surebridge Mine Road. It ascends gently for about a 1/2 of a mile until it reaches Times Square. Times Square got its name because it is located at the junction of three trails and serves as a popular meeting place for hikers.

We took a nice long break here which was about the halfway point of our hike. There was a group of hikers that were there when we first arrived. Shortly thereafter, they left and we had the place to ourselves for quite some time. When we were ready to continue, we began following the red-dot-on-white blazes of the Ramapo-Dunderberg (R-D) Trail, just to the left of the Times Square boulder.

The Ramapo-Dunderberg Trail is the oldest trail in Harriman State Park and bisects the park west to east. At 23 miles long and 6,000 feet of elevation gain, it is a challenging trail, but quite enjoyable with its ups and downs and open rock surface. 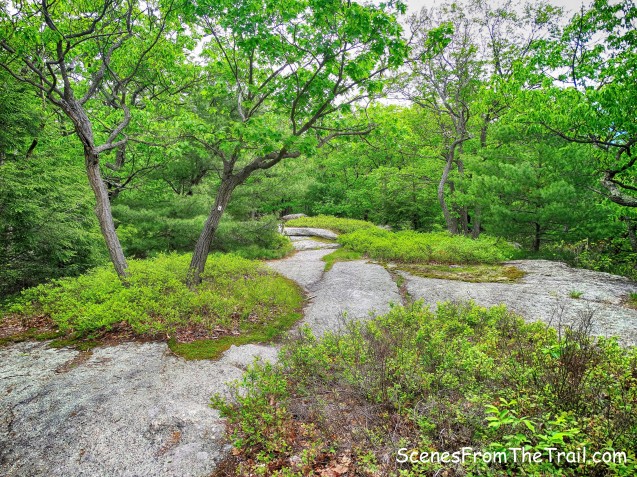 The ruggedness and beauty of this trail added to the enjoyment of the hike even though we were only on it for about 1/2 of a mile. 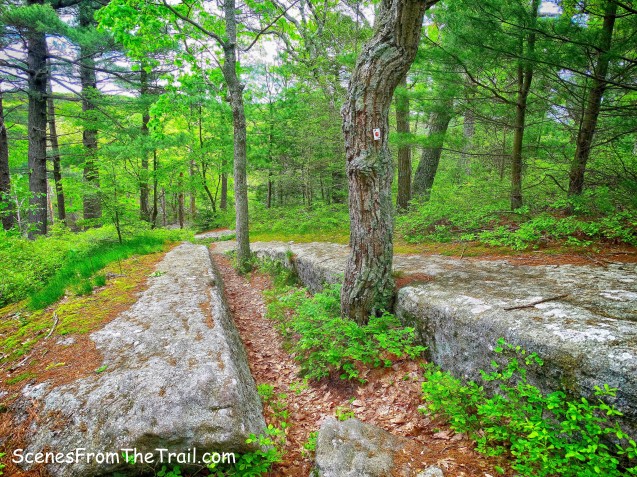 We were now looking for a junction with the Bottle Cap Trail. It is listed on the NY/NJ Trail Conference map as an unmaintained trail, but hikers have nailed actual bottle caps to the trees to mark the trail. I was a little hesitant when choosing this trail as I have read on a few hike descriptions that this trail is hard to follow and the bottle caps being so small, at times are hard to see. The junction was visible, but the beginning of the trail had me rethinking going this way.

The beginning of the trail, east of the R-D Trail is overgrown, and we almost turned back, but then the trail cleared up and the bottle caps led the way. 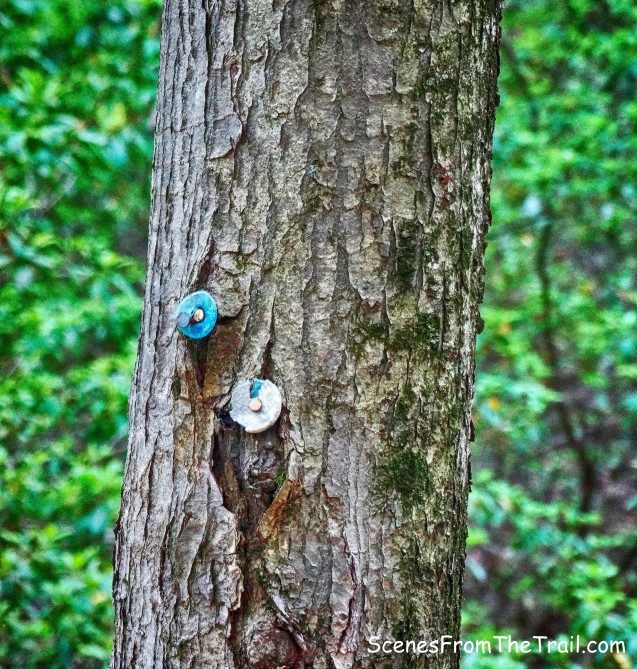 At times the trail was easily discernible and other times not so much. The key was once we came to a tree that was marked with bottle caps, we did not move forward until we located the next one. In essence, we were playing “find the bottle cap” along the way. 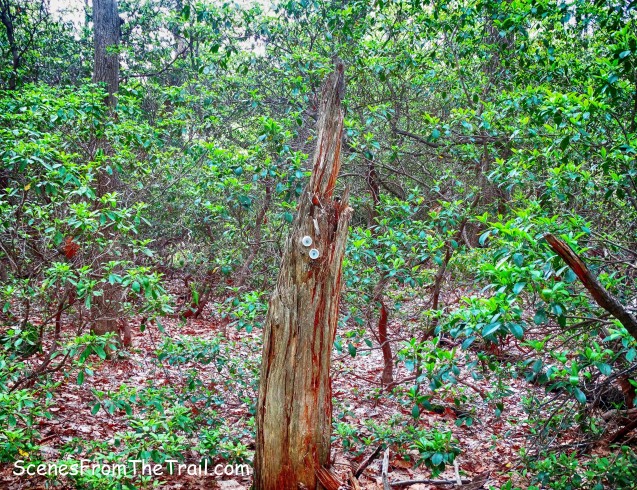 For an unmaintained trail, it wasn’t too bad. Most of the blow downs were chainsawed and the path cleared, so someone has been maintaining it to some degree.

We didn’t see any other hikers since we left Times Square. After a mile on the Bottle Cap Trail, we arrived at its eastern terminus, at a fire road (the former route of the A-SB Trail).

Walking on the unmarked fire road that was mostly level, was a nice reprieve.

We enjoyed a scenic walk on this woods road as we were now starting to wear down.

Arriving at a junction with the A-SB Trail, we turned left, now heading for the homestretch. The A-SB Trail climbs a bit as it heads southeast towards the parking area.

The Arden-Surebridge Trail climbs to the shoulder of Pine Swamp Mountain then descends to the northern shore of Lake Skannatati and a now full parking lot.

I hope that you enjoyed todays hike as much as I did. Please don’t forget to follow my blog and stay up to date on all my journeys. Until next time folks, now get out there and take a hike!

Cons: Can’t think of any.