Palisades Interstate Park in New Jersey is about 12 miles long, a half-mile wide, and encompasses 2,500 acres of wild Hudson River shorefront, uplands, and cliffs. There are more than 30 miles of hiking and ski trails, a boat launching ramp, a scenic riverside drive, a cliff-top parkway and overlooks, riverfront picnic areas and playgrounds, a nature sanctuary, two boat basins, historic sites — and mile after mile of rugged woodlands and vistas just minutes from midtown Manhattan.

This is my go to place when I don’t feel like traveling too far. Just over the Tappan Zee Bridge lies a unique geological formation offering stunning views of Manhattan and the Hudson River. We had about a foot of snow just days prior to this hike and I wasn’t looking forward to postholing for an entire hike. When I looked up the snow totals, I saw that Rockland County only got about 8 inches of snow. That is still deep enough to make any hike a lot less fun without snow shoes. I wasn’t about to stay in so I came up with a hike that wouldn’t include much elevation gain. This hike was atop the Palisades cliffs and an out and back, which meant we hiked to a certain point and retraced our steps back. A loop hike here would involve a steep descent down towards the Hudson River and then an equally steep ascent from the Hudson River back up to the top of the cliffs. Not on this day, we kept it simple.

We arrived just after 9am on this Saturday morning and the huge lot had a few cars in it. We made our way over to the scenic lookout and captured some images before we began our hike. First a look to the north…… 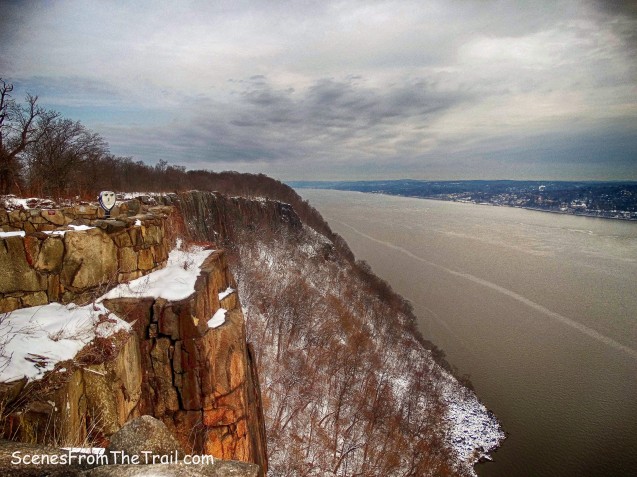 view north up the Hudson

then a look to the south.

view south down the Hudson

We sat at a picnic table and put on our microspikes, which are essential for winter hiking. We then began our hike at northwest end of the parking area following the Aqua-blazed Long Path.

We followed this footpath which paralleled the entrance road until we came to a junction where the Long Path turned left. We should have continued straight ahead on Trail B (skiing and hiking trail), but I failed to check my map. Nevertheless, the Long Path led us out onto the entrance road. The Long Path crosses the road and continues along the edge of the cliff then descends steeply on some stone steps. I wanted to avoid any steep sections so we continued along the side of the entrance road towards the Palisades Parkway (where we entered the park). There we turned onto an unmarked trail that began between a gap in the stone wall that lined the road.

gap in the stone wall

We were the first to hike this trail on this morning and the snow was deep in some spots. I was familiar with the trail so we just trudged along. This trail is short-lived and took us to the woods along the northbound lanes of the Palisades Interstate Parkway. There we took the Blue/White-blazed Forest View Trail which led us toward the Hudson River. 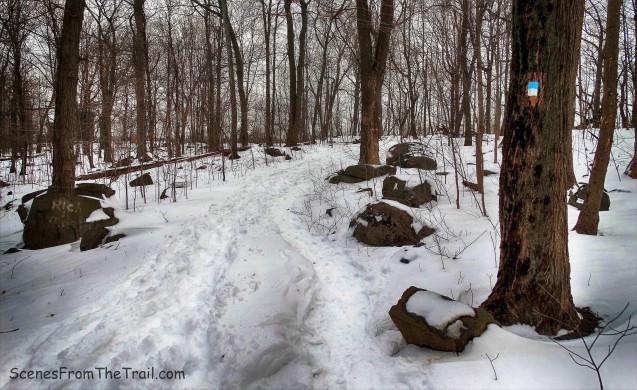 In a short distance, we came to a t-intersection where the Forest View Trail turns left and joins the Long Path. We turned left to check out the Women’s Federation Monument which was built in 1929 to honor the role the New Jersey State Federation of Women’s Clubs played in preserving the Palisades.

I’ve visited this spot several times, but never in the snow. Its design was meant to evoke the ancient watchtowers along the River Rhine in Europe: poets had called the Hudson “the Rhine of the New World” or “America’s Rhine” because of its scenic beauty.

There’s not much better than visiting a castle perched high atop the cliffs overlooking the Hudson River. 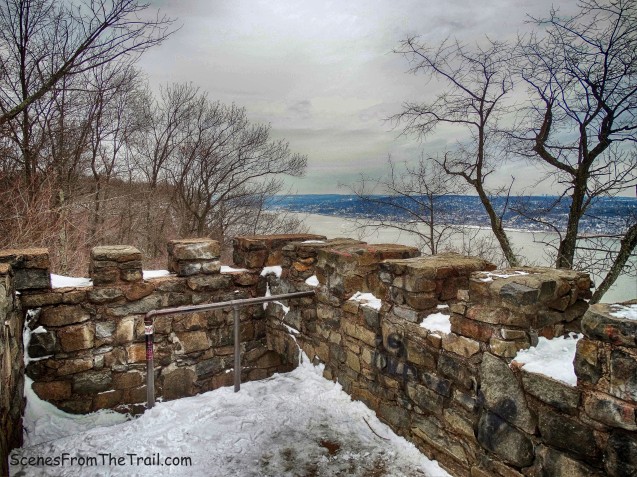 As we were checking out the castle, a large troop of Boy Scouts came along and were having some fun in the snow. We decided to get moving and retraced our steps back to the t-intersection and continued south, once again following the Aqua blazes of the Long Path.

It was pretty much a straight walk along the cliffs from here on. I love the views from here as I can see Westchester County from a different perspective. The Yonkers Power Station just across the river is one of those sights. 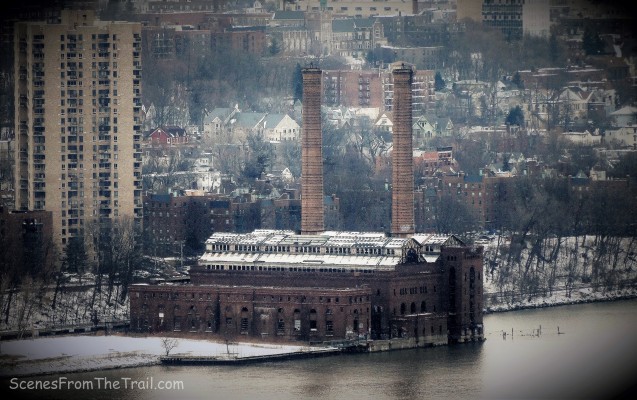 Untermyer Park  in Yonkers, NY was also visible from across the way.

Alongside the trail we came upon Gray Crag, a concrete bridge span, about thirty feet long and supported by a pair of steel I-beams. It crosses to a free-standing pillar of rock that forms a tabletop, about two hundred feet long, but only a dozen or so wide. John Ringling (yes that Ringling) and his wife Mable bought two big properties here and merged them into the hundred-acre estate they named Gray Crag. It would serve as their summer home through the 1920’s. Back in the day, the I-beams and concrete were covered in a wooden veneer to make it look and feel like a rustic bridge. On this day it was just covered with snow. 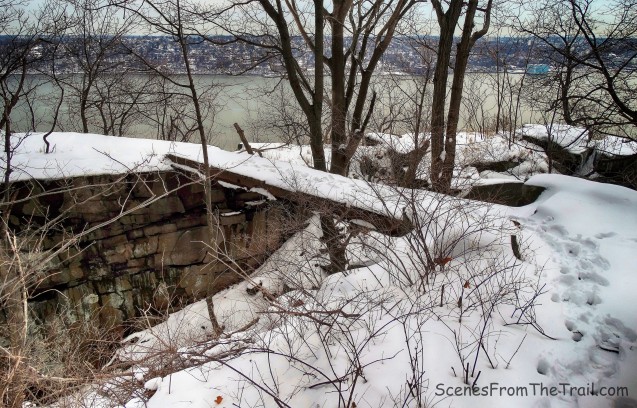 We walked as far as the Park Headquarters and decided to turn around there. We were wearing down at this point. Hiking in the semi-deep snow was laborious and we had to go back the way we came. We stopped at the castle on the way back before we made the final push to the parking area. There we relaxed on a picnic table and enjoyed some hot chocolate and sandwiches. Upon arriving back at the homestead, I whipped up some Coconut Chicken With Pina Colada Dip and then we had Brown Sugar Bacon Cheeseburgers with a delicious homemade German Chocolate cake for dessert. Another successful hike in the books along with some scrumptious culinary delights. It was a good day.

Don’t forget to follow my blog and feel free to share my posts with your friends. As always, I welcome any comments or suggestions regarding past or future hikes. Now get out there and take a hike!

Cons: popular in warm weather, trails travel alongside the parkway at times.