Disclaimer: Exploring abandoned and/or ruined structures can be dangerous and you could be trespassing. Should you choose to enter the property of any of the places featured on this site, do so legally.

Beacon, NY was originally settled as the villages of Matteawan and Fishkill Landing in 1709, which were among the first colonial communities in Dutchess County. During the 1960’s, urban renewal led to the destruction of some significant historic buildings. In the late 1970’s, a decline in the economy shuttered most of the factories. This decline quickly became an economic downturn that lasted from about 1970 to the late 1990’s, during which almost 80 percent of the city’s commercial business spaces and factories were vacant. Some buildings were placed on the National Historic Register and thus saved from the wrecking ball and some lay in abandon and/or ruins. There were a few such places that piqued my interest and I wanted to visit and photograph them. Since I reside about an hour away, I decided to visit multiple sites on the same day and work in a hike as well.

It was a cold January morning with temps in the mid 20’s, but sunny. A perfect day to do some exploring. Our first stop would be an abandoned cemetery that sits behind the Reformed Church of Beacon. Originally the Reformed Dutch Church of Fishkill Landing, is a congregation of the Reformed Church in America. It claims to be the oldest church in Beacon. The original church started out as a small and simple white frame structure. It wasn’t until the late 1850’s that a new church had to be built because it was outgrown. The 2 1/2 story Victorian Gothic church was completed in 1859 and made the National Register of Historic Places in 1988.

According to their website, “The Holy Spirit is alive and moving at the Reformed Church of Beacon.” That doesn’t seem to be the case for the cemetery, which lays in abandon just feet away.

The family burial vaults that were built into the hillside are now empty and exposed to the elements. 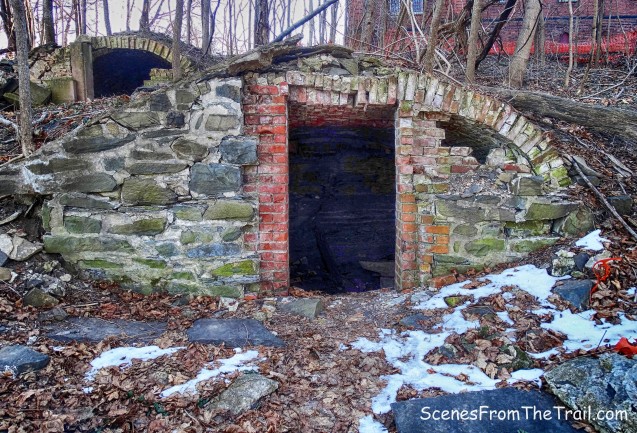 Colonel William Few, a signer of the U.S. Constitution for the state of Georgia, was once buried in the family vault in this cemetery. Due to the condition of the cemetery, his remains were removed in 1973 and re-interred in Augusta, Georgia.

Its graves date from 1813 to the early 20th century, but some have been re-interred elsewhere in the years since the cemetery fell into decline.

I am not sure if the same can be said for those that were laid in the ground.

From the inside looking out. 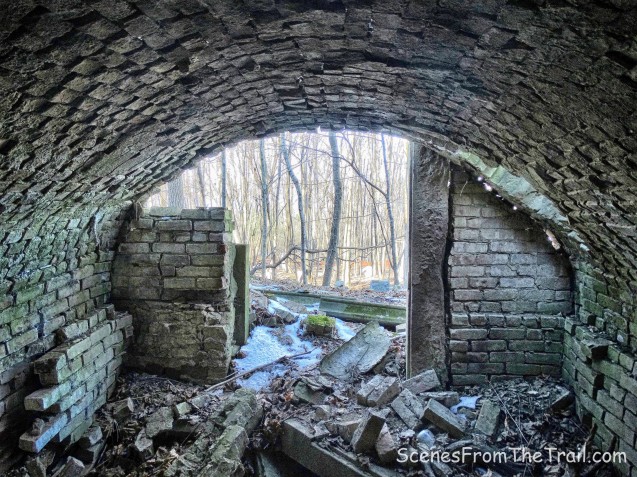 Our next stop was an old school, located not too far away. In Historic Beacon Robert J. Murphy and Denise Doring Van Buren wrote: Designed by renowned architect Frederick Clarke Withers the building is unexpectedly churchly in appearance – and, in fact, it was once used as a chapel. Built in 1865, it is our oldest schoolhouse extant. Its long history even includes hospital duty: during the Great Flu Epidemic of 1918 the Red Cross used the school as an emergency hospital to treat the overflow of Beacon’s sick.

I spotted this building on Google Maps while searching for the abandoned cemetery and at first I thought that the cemetery was here. Even after I pinpointed the location of the cemetery, I thought that this place warranted a visit as well. Besides the information above, I could not find anything else of note online.

The school sits on a desolate section of town, a stone’s throw from Fishkill Creek. The property around it is overgrown and neglected. I took a walk around the building to get a better look and the back door which was a sheet of plywood, was ripped off and laying on the ground. I heard some noises coming from the inside so I did not attempt to enter. Someone or something was moving about and I did not want to come face to face with them. I was able to capture the ensuing image from the doorway.

The front entrance is on the west side of the building. 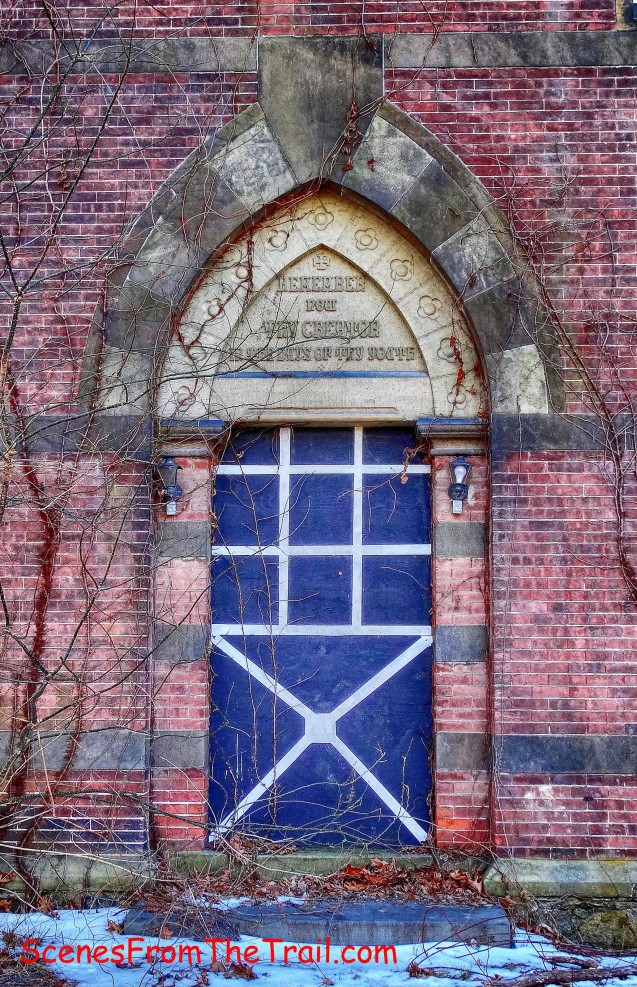 There is also a small outbuilding close by.

I’m not sure what the purpose of this building was for, but it had a small wood burning stove and a chimney built in. 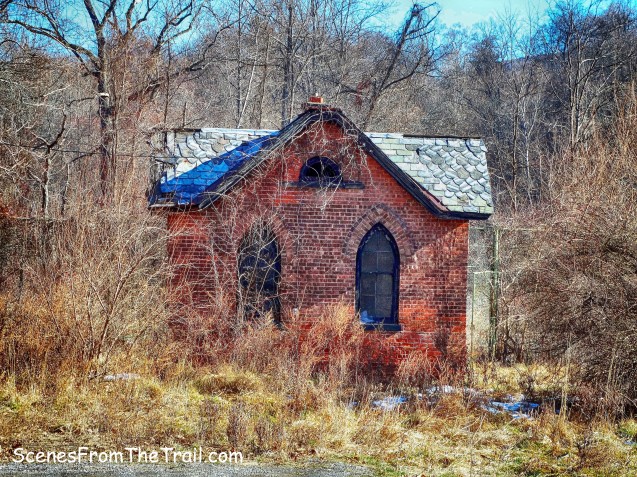 A safety screen was peeled back and I was able to get a peek inside. 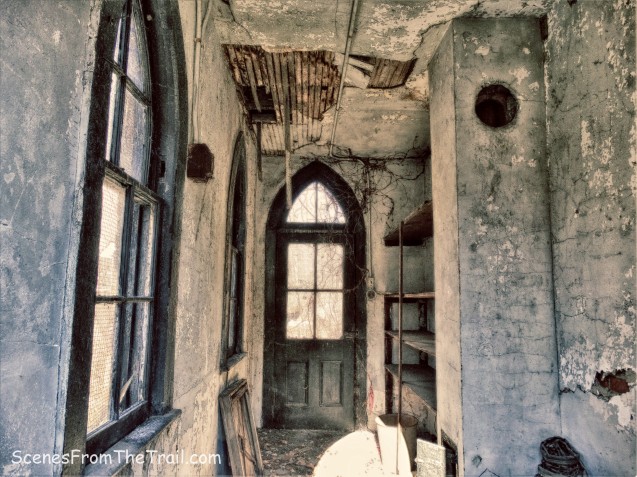 Within feet of the outbuilding there is a tennis court that has seen better days.

Tennis anyone? I would have borrowed a racket from whomever was lurking inside the school, but that was a terrible racket.

Once we were done checking out the school, we left the vehicle parked alongside the road and began to walk up the hill. Our next stop was The Craig House Institute which was just up the hill right alongside Route 9D. Originally built for Civil War General Joseph Howland in 1859, the Victorian mansion was the first American privately owned psychiatric hospital. The architect was Frederick Clarke Withers, once a partner of Calvert Vaux, better known as co-designer with Frederick Law Olmsted of Central Park in Manhattan. For decades it was America’s most prestigious rehabilitation home, the perfect haven for patients to be cured. In reality it was a place of great sadness and despair.

I had read about this place and it seemed like an interesting subject to photograph. As we walked up the hill I saw a paved road that led into the woods. It looked as it may have been a service road that led onto the property. I had read about numerous other buildings on the grounds that had either burnt down or had been torn down. I decided to take this route and see what may be hiding away back there. Not too far from where we entered, there were ruins of a building to the left. I bushwacked through the thorn bushes to get a closer look. I did not notice any remnants of any interior walls along the ground and it appeared to me that this building had an open floor plan. Perhaps a dining hall or a gymnasium? 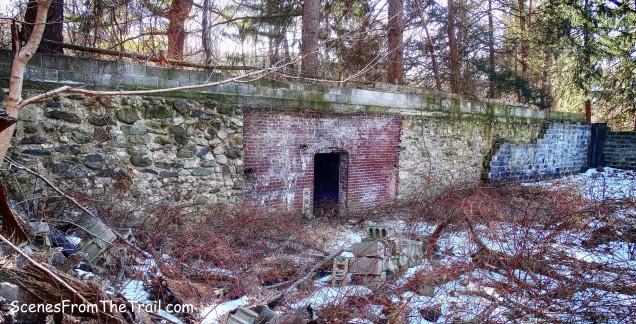 I walked over to the doorway to get a look inside. The room sat underneath the road that we had just walked on and had a similar appearance to an old wine cellar although that would not be practical for a sanitarium.

We continued on the service road until it led us out onto one of the main roads of the property. We walked up to the front of the mansion to get a close up view of this palatial hospital. This is some information that I have gathered about its most prominent residents. Zelda Fitzgerald, the wife of F. Scott Fitzgerald, was committed in 1932, after years of struggling with mental illness. She died in 1948 during a fire in another psychiatric hospital in North Carolina. Frances Ford Fonda the wife of Henry Fonda and mother of Jane and Peter Fonda, committed suicide here in 1950 at the age of 42 by cutting her throat with a razor. Her suicide came just days after Henry Fonda personally asked her for a divorce.

Rosemary Kennedy spent time at Craig House after a lobotomy left her in a virtually infant-like state. Jackie Gleason used Craig House as a place to relax, recharge and dry out. It is rumored that he had donated a pool table for the residents to use. Marilyn Monroe checked in under an assumed name to deal with her many issues.

Apparently left over from a former renovation.

The once exclusive hospital closed in 1999, but the tragedy of the house doesn’t end there. It was bought in 2003 by Robert Wilson, a Wall Street hedge fund founder. In December of 2013 at age 87, he jumped to his death from a window of his Upper West Side apartment building. 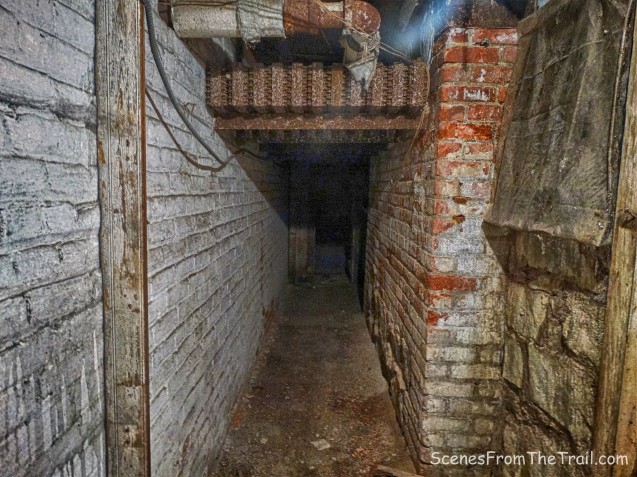 “I love that the story can’t be changed again and one more place is haunted – old sorrows and a half-forgotten happiness are stored where they can be recaptured.” ~ Zelda Fitzgerald

It was an quite an intriguing morning in Beacon. So much so that I decided to pen two blog posts about this day behind the lens. I hope that you enjoyed the images I captured along with the information that I provided. I actually learn more during the writing of my blog than I do before my visits to these historical places. As always, please don’t forget to follow my blog and feel free to share this post with your friends. Comments and/or suggestions are always welcome as well. 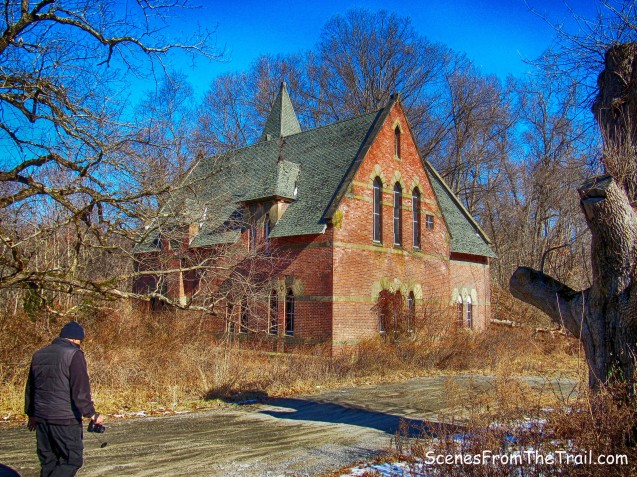 11 thoughts on “Abandoned in Beacon”