Rockefeller State Park Preserve is an 865-acre park that was established in 1983, when the Rockefeller family donated a portion of their Pocantico Hills estate. The preserve is criss-crossed by a network of carriage roads, constructed by the Rockefellers in the 1920s and 1930s, and this hike follows these delightful gravel roads. It traverses the lesser-used western portion of the preserve and follows a portion of the Old Croton Aqueduct. Because there are many intersecting trails, not all of which are marked with signs, it is strongly advised to take a trail map with you.

I have been hiking Rockefeller State Park before I even knew what hiking was. Back then we would just say “let’s go take a walk up in Rockefeller’s.” I have wandered many areas of the preserve mostly without a map, mainly because years ago the trails weren’t marked and I don’t even know if a map existed. I have even gotten a bit lost up there as well and often wandered the area at night. Growing up nearby, it was always a place that as a youth, one could go to get away from the prying eyes of a small town. Recollections of parties and bonfires come to mind whenever certain parts of Rocky’s property is mentioned. We all have many tales to tell of the times that we spent in those woods. That is why hiking in Rockefeller State Park holds a special place in my heart.

With the uncertainty of the amount of snow that would fall this weekend, I had several hikes lined up. The original hike I had planned necessitated walking on unblazed trails in an unfamiliar area. Although we only got a light dusting, it was enough to make an unmarked trail harder to follow. After tossing the idea around, we decided to do a longer, but easier hike at Rockefeller State Park Preserve which I found on the NY/NJ Trail Conference website. The weather for this Sunday morning hike was sunny with temps in the mid to high 30’s. Enough snow fell the previous night to leave a layer of white on the ground, so we brought along our microspikes to help with traction along the trails. We parked on Gory Brook Road in Sleepy Hollow which is within feet of the Old Croton Aqueduct Trail, where our hike would begin.

Once geared up, we made our way to the OCA and proceeded north, with Gory Brook Road on our right. We walked on the elevated section of the OCA where it passes over the Pocantico River, then came to the Sleepy Hollow Weir. The weirs along the Old Croton Aqueduct were structures that were built right over or next to the aqueduct, enabling direct access to the aqueduct tunnel. This allowed for maintenance and repair by diverting the waters to a nearby waterway. 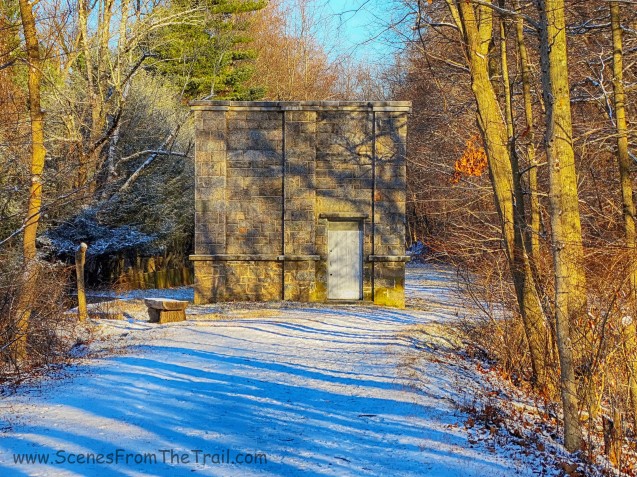 We dusted off a bench and sat down to put on our microspikes. Once our traction devices were firmly in place we shoved off. Just after passing the weir we came to a junction. Here we made a sharp right onto the Big Tree Trail which curves to left as it heads downhill. There are no signs at this junction, but it is easily discernible. At the bottom of the hill we came to an H-intersection where we made another sharp right at the blue sign post.

Although no sign marked the trail, this was the Pocantico River Trail, which would be our route for the next two miles. We crossed the Pocantico River on a stone triple-arched bridge with the high embankment of the Old Croton Aqueduct to the right, where we crossed over moments earlier.

Pocantico River just before it passes under the OCA.

In a short distance we came to a concrete bridge. This bridge is part of Old Gory Brook Road. This road used to run from New Broadway to Old Sleepy Hollow Road. Most of the road now lays in abandonment. 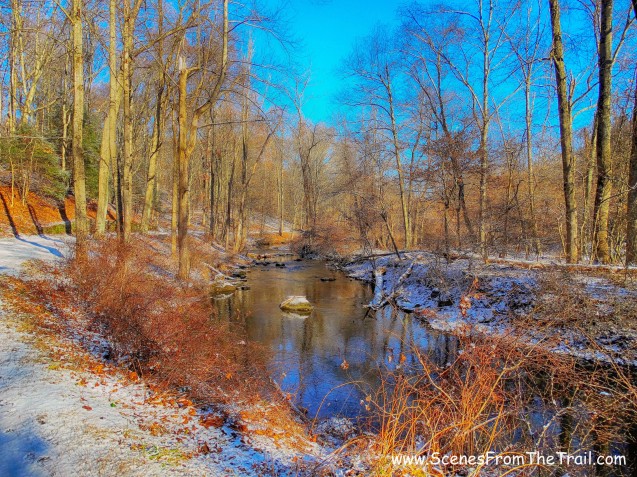 We passed beneath the Route 117 overpass still following the wide carriage road. 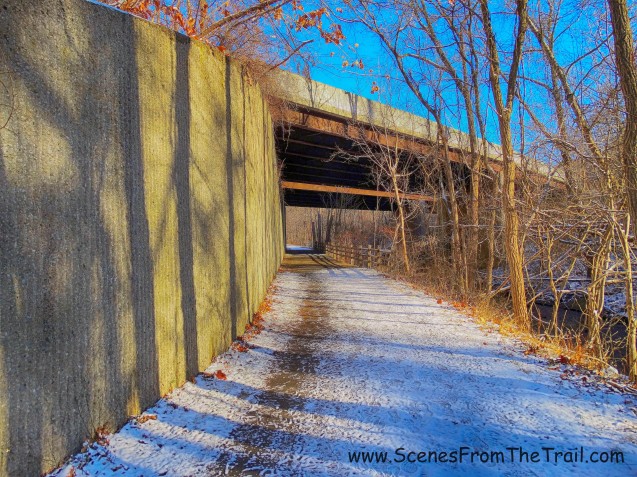 The road led us gently up the hill where we turned right onto the 13 Bridges Loop Trail.

The 13 Bridges Loop Trail like the name implies, is 1.9 mile trail that leads to 13 bridges over the wandering Gory Brook. 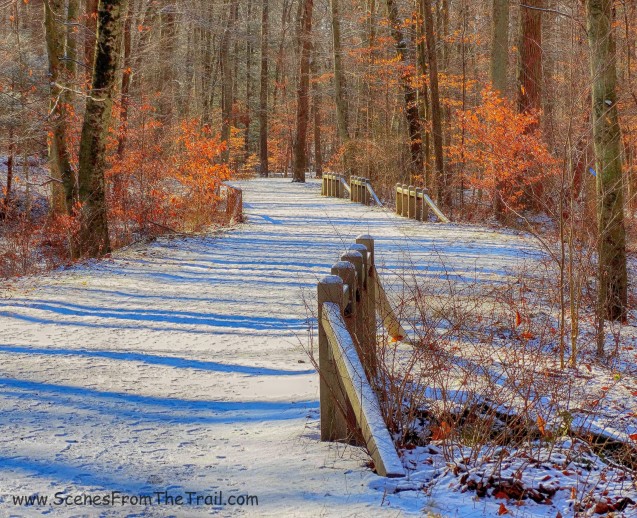 Legend has it that Gory Brook got its name after a Revolutionary War skirmish left the stream red with the blood of British troops. According to Henry Steiner, Sleepy Hollow Village Historian, The brook passes through a part of the Rockefeller Preserve known as Hulda’s Glen and it is the largest tributary of the Pocantico River. He has a great book titled: The Place Names of Historic Sleepy Hollow & Tarrytown.

We again passed under another section of the Route 117 overpass, a little further west than we did earlier.

The Gory Brook Trail began after passing beneath the bridge and we followed it briefly then turned right onto Witches Spring Trail and then right again onto the Spook Rock Trail, which was the steepest section of the hike, but short lived. A large boulder sitting atop a hill, now graced with its own trail, it was a gathering place for Indian councils where leaders of the tribe would gather. Council rocks were chosen in part because they were believed to hold sacred powers. Hulda the witch is said to have had a hut not too far from the boulder.

The Spook Rock Trail leads straight into the Big Tree Trail and we began following it.

We stayed on the Big Tree Trail until we reached the H-intersection that we encountered towards the start of the hike. Here we turned left onto the Pocantico River Trail, briefly retracing our steps from earlier in the hike. Once again we crossed the stone triple-arched bridge, but this time we went straight after crossing. The trail climbed briefly with the high embankment of the Old Croton Aqueduct visible to our right through the trees. Now heading south along the abandoned Gory Brook Road, we made our way back to where we began our hike. 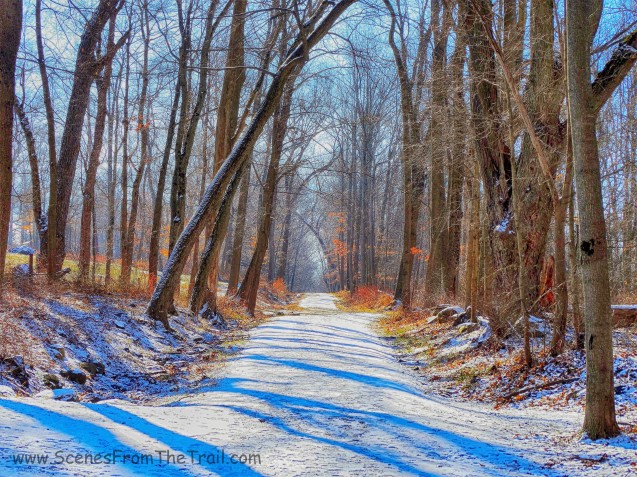 Another successful hike in the books and we were off to fill our bellies. I had some Cuban Beef Stew in the slow cooker along with a smorgasbord of other culinary delights. I truly hope that you enjoyed the hike and please don’t forget to follow my blog. Feel free to leave a comment and/or any suggestions. Until next time folks, now get out there and take a hike!

Cons: trails only marked at intersections (mostly), gets crowded in warm weather, haven for unleashed dogs (despite park rules). 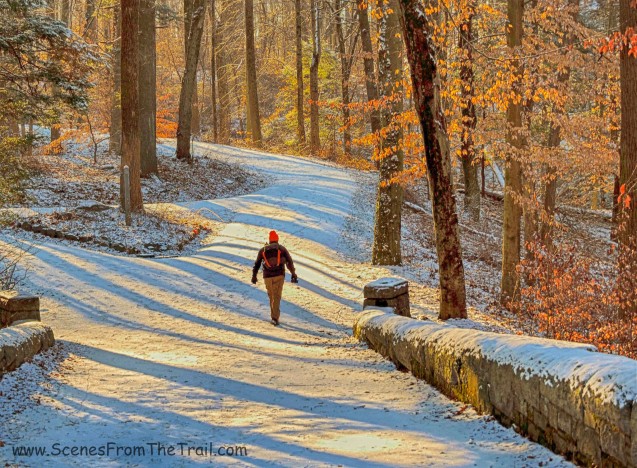