It was a Saturday morning and temps in low 30’s, partly sunny with no rain in sight. A bit chilly, but after all, it is December and I was going to get my hike on. This hike, which I saw on the NY/NJ Trail Conference website, was one that I wanted to do last May. Instead, we only made it to the ORAK ruins. I wanted to return because last time the ruins were somewhat obscured by the vegetation and I figured that it would be more visible. We started out by arriving at the parking area on County Route 106 around 9:30am. A late start, but I was in charge of breakfast and Biscuits and Gravy were worth the delay. We gathered our gear and began our hike by walking west along the road for a few hundred feet. After crossing over Minisceongo Creek we turned left and proceeded past the gated road to commence following the yellow-blazes of the Suffern-Bear Mountain (S-BM) Trail.

We would be following this trail for the first 2 miles of the hike. The trail climbed gently and in about 1/4 mile veered left onto a woods road. There we passed a stone wall or foundation and then came to a stone gatehouse. These ruins known as ORAK, was built in 1923 by George Briggs Buchanan, a vice president of the Corn Products Refining Company, which manufactured Karo syrup (Orak is Karo spelled backwards). After Buchanan died in 1939, his heirs sold the mansion to the park, and it was demolished in 1973.

Just past the gatehouse, to the left, was the mansion. It was reclaimed by the woods long ago, but still an interesting sight nonetheless.

I read somewhere that the dining room of the house resembled a ship’s cabin, with portholes for windows, and a floor that rocked gently to simulate a ship’s motion. Sounds pretty cool to me. There was another building close by with a giant arched window and a curved wall.

Once we were done exploring the ruins, we continued on the Suffern-Bear Mountain (S-BM) Trail. The trail continued to climb gradually and then became steep as we neared a communications tower. Just beyond that, the trail continued its gradual rise to the 1,276 summit of  Jackie Jones Mountain and the fire tower. Built in 1928, the 60-foot-high tower was returned to Park control in the 1960’s after having been operated since 1931 by the State Fire Control. It is the last remaining fire tower in Harriman State Park.

This tower is a death trap and I would not advise climbing it. I was pretty bummed because the only view from this spot is from the tower. The bottom row of steps is missing, the remaining wood is rotted and the steel is rusted to the point that it was not worth the risk to climb.

UPDATE: Tower was restored in 2018 and can now be climbed, although the cab is locked at times. For an updated version of this hike with images of the restored fire tower, click HERE. 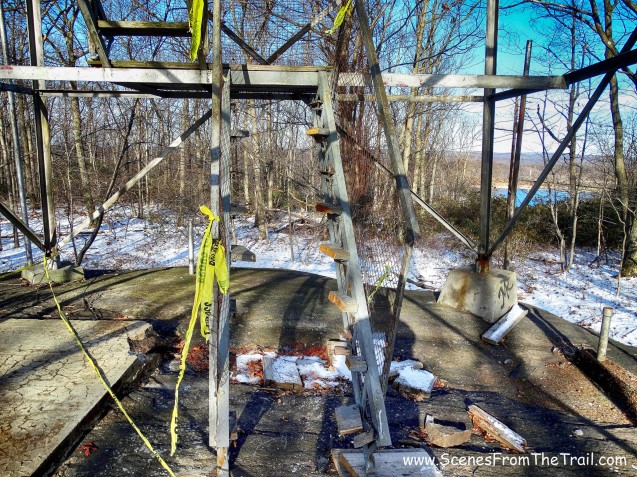 After stopping briefly at the tower we resumed our trek on the S-BM Trail as it began a steep descent. We crossed two streams along the way and then arrived at a junction with the aqua-blazed Long Path. We continued following the joint S-BM/Long Path, which turned right onto a woods road. After a short distance, the joint trails turned left and climbed to the Big Hill Shelter. Built in 1927, this stone shelter offers a panoramic view to the south, with the New York City skyline visible in the distance on a clear day.

There was a troop of Boy Scouts that had set up camp in and around the shelter. The view from 1,227 feet was nice albeit a bit crowded, but we made do. The NYC skyline was clearly visible to the south and we took a brief rest as we enjoyed the view.

When we resumed our hike, we retraced our steps back to where the Long Path joined the S-BM Trail and turned right. I’ve hiked many sections of the Long Path and this was one of the more pleasant parts. We crossed an attractive stream along the way.

Shortly after crossing the stream we came to the Old Turnpike, a wide woods road that is now the route of an underground gas pipeline. We turned left here and walked several hundred feet and turned right onto another woods road. After about 1/3 of a mile we reached a junction with the yellow-blazed S-BM Trail and turned right. Now retracing our steps past the ORAK ruins, past the gate and back to the parking area. This was a pretty good moderate hike through some scenic woods, with multiple points of interest. It also consisted of multiple woods roads that made for easier hiking. We had another successful hike and were headed back for some homemade Split Pea with Ham soup made by me and an assortment of other goodies to munch on. I hope that you enjoyed the hike and don’t forget to follow my blog. I welcome your comments and/or any suggestions that you may have. Now get out there and take a hike!