The Target Rock National Wildlife Refuge is located on the north shore of Long Island, 25 miles east of New York City. This 80-acre refuge is composed of mature oak-hickory forest, a half-mile rocky beach, a brackish pond, and several vernal ponds. The land and waters support a variety of songbirds (particularly warblers during spring migration), mammals, shorebirds, fish, reptiles and amphibians. During the colder months, diving ducks are common offshore, while harbor seals occasionally use the beach and nearby rocks as resting sites. NY State and Federally protected piping plover, least tern, and common tern depend on the Refuge’s rocky shore for foraging and rearing young. The spring bloom at Target Rock is a reminder of its days as a garden estate, with flowering rhododendrons and mountain laurel.

Founded by President Theodore Roosevelt in 1903 and administered by the U.S. Fish and Wildlife Service, the National Wildlife Refuge System is a diverse network of lands and waters dedicated to conserving America’s rich fish and wildlife heritage. 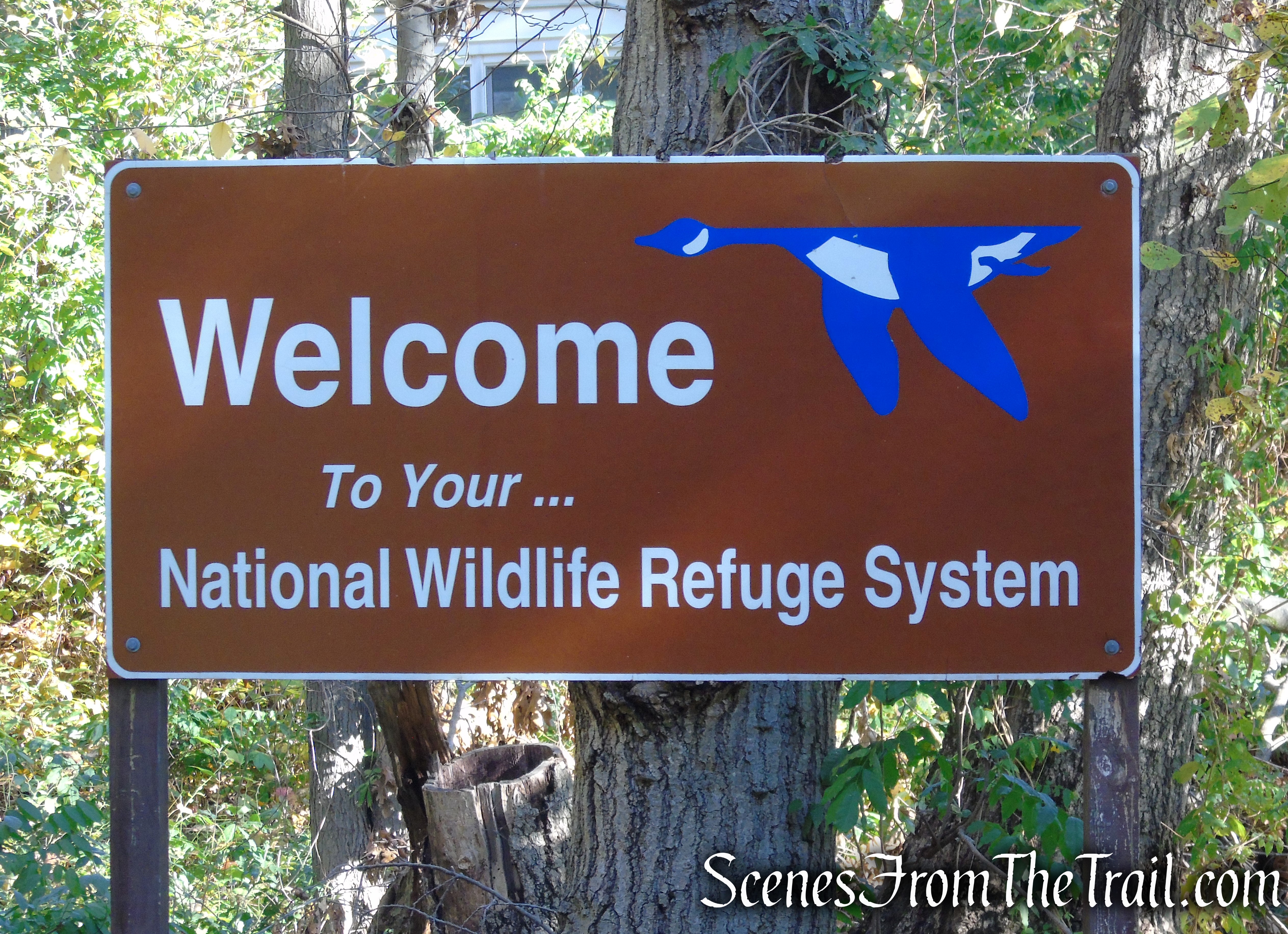 The refuge is managed by the U.S. Fish and Wildlife Service. 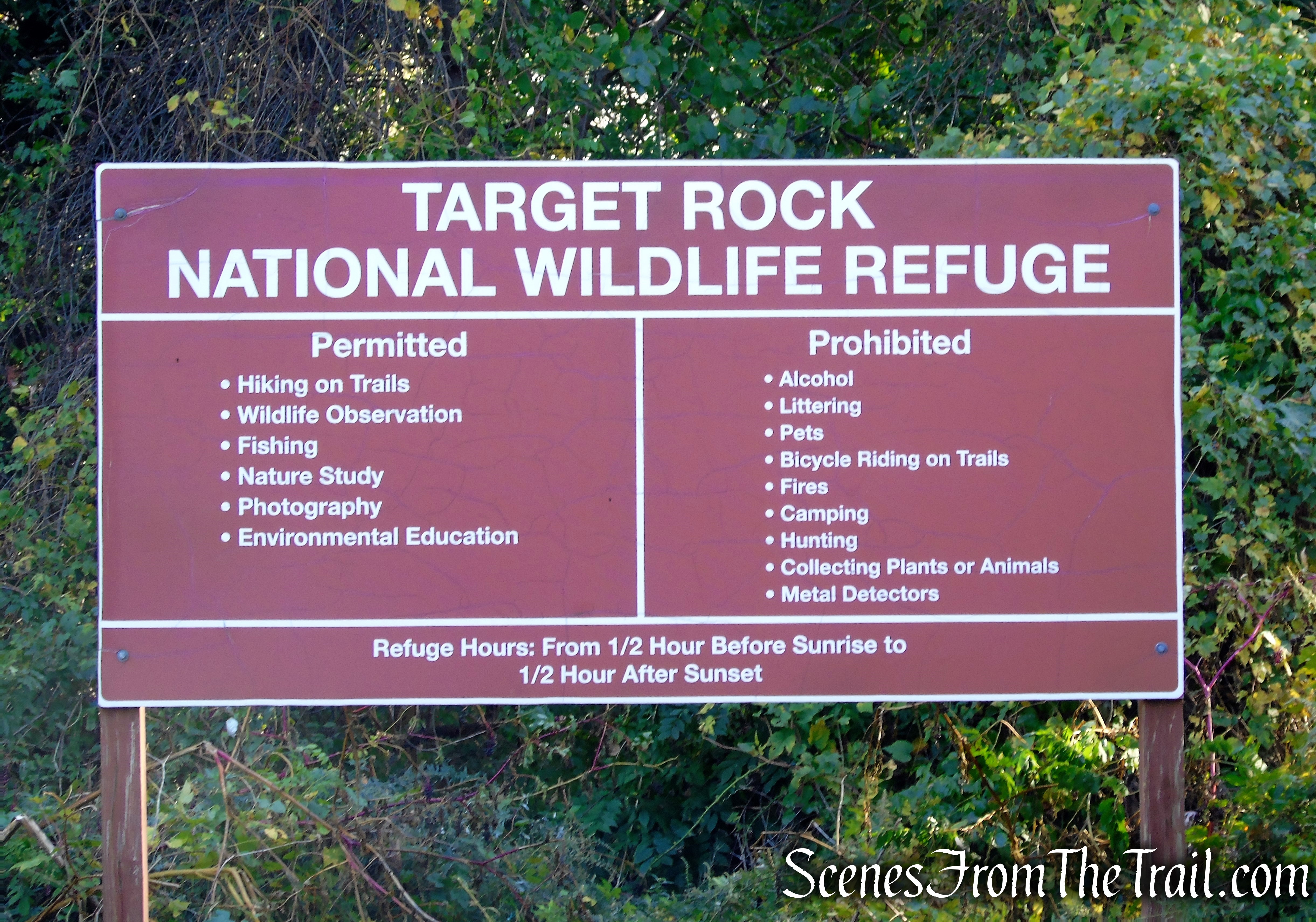 The 80-acre refuge is named for the massive shoreline rock, one of the island’s boulders that remain from the glacial deposits. Legend has it the British Navy used the 14-foot high “Target Rock” for target practice during the War of 1812. Long Island’s geography was carved out by glaciers thousands of years ago, forming bluffs, dunes, necks and bays. At the time of the Revolutionary War, Target Rock was part of the bluffs that overlook Huntington Bay. Over the centuries, constant movement of the winds and waters eroded the massive boulder away from the bluff, consigning it to stand individually just offshore.

In 1654, the Matinecock Native Americans sold 3,000 acres of what is now called Lloyd Neck to English settlers from Oyster Bay. In 1676, James Lloyd acquired the neck, which was then taken over by his son Henry. Henry Lloyd farmed the land and erected a house, which still survives in Caumsett State Park.

During the Revolutionary War, the town of Huntington along with the village of Lloyd Neck was occupied by the British. A fort (Fort Franklin 1777-1780, now known as Fort Hill) was built by the British on the western end of Lloyd Neck overlooking the entrance to Cold Spring Harbor. Another fortification (East Fort) was built on the east side of Lloyd Neck near the site of Target Rock. The forts were designed by the British to defend the harbors from French and American forces who attacked the forts several times. Despite the bloody battles there, the Revolutionaries never took Fort Franklin, and it was eventually abandoned after the war.

Target Rock was known to have been a target for cannon practice by British warships during the War of 1812. This glacial erratic which once sat on the side of the cliff, along with the ground that East Fort stood on, receded into the ocean over time, due to erosion.

The 1900’s ushered the era of the Long Island Gold Coast, and various wealthy families began to buy land and build seaside mansions and estates.

In the early 20th century, an estate with 300 acres and 2 miles of waterfront, was established at the eastern end of Lloyd Neck, the site where East Fort once stood. Originally built by Rudolph and Olga (Von Neufville) Flinsch, it was called Target Rock Farm. It was then purchased from the Flinsches by Ambassador James W. Gerard in 1921 who made extensive improvements to the property.

In 1936 the property was sold to Investment Banker and pioneering mutual fund proprietor Ferdinand Eberstadt who constructed a new 40,000 square ft. Georgian style home, designed by Delano and Aldrich in 1937-1938. Under Eberstadt’s ownership Target Rock Farm would become known for its magnificent gardens.

In 1967 he donated this property to the Federal government under the Migratory Bird Conservation Act. Although it was first considered as the potential site of a future nuclear power plant, the estate was ultimately destined for use as a wildlife refuge with the goal of preserving endangered plant and animal species and promoting a migratory route for birds. The donated land was to be the formal legal basis that halted the proposed construction of a nuclear power plant by the Long Island Lighting Company (LILCO) in 1970.

After being declared too deteriorated to be repaired and despite attempts by preservationists to save the mansion, it was demolished in 1995 by the Fish and Wildlife Service, which said that it had deteriorated and that repairing it was “not the purpose the refuge was established for.”

The Target Rock National Wildlife Refuge has about 1.5 miles of woodland trails plus a half-mile of rocky beach. The adjacent East Beach provides almost another mile of continuous shoreline to walk on if one wants to extend the distance.

We arrived shortly before 10:30am on a cool Halloween morning. The temperature was hovering around 40° and there was only one car in the parking lot, which left as we were pulling in. We planned on doing a loop incorporating East Beach to lengthen the walk. We began on the Warbler’s Loop Trail, connecting to the Rocky Beach Trail towards the beach, and walking south as far as possible along East Beach. Retracing our steps along East Beach to Rocky Beach for a view of Target Rock, then returning via the Beach Access Stairs to the upper portion of the Rocky Beach Trail and back to the parking area. We did not walk on the Gardener’s Path during our visit.

From the parking area, we proceeded east on the Warbler’s Loop Trail which leads gradually downhill on a wide path. 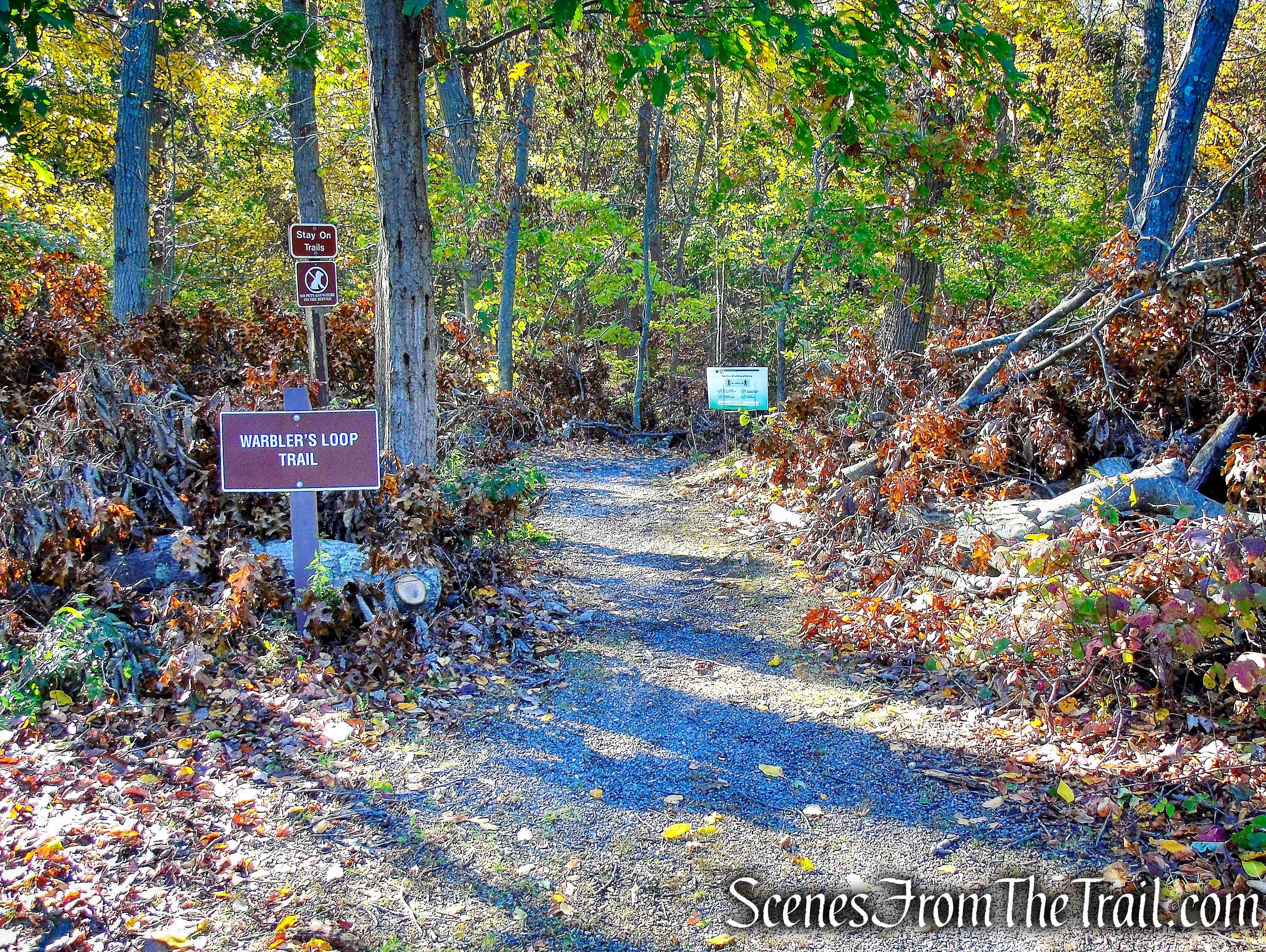 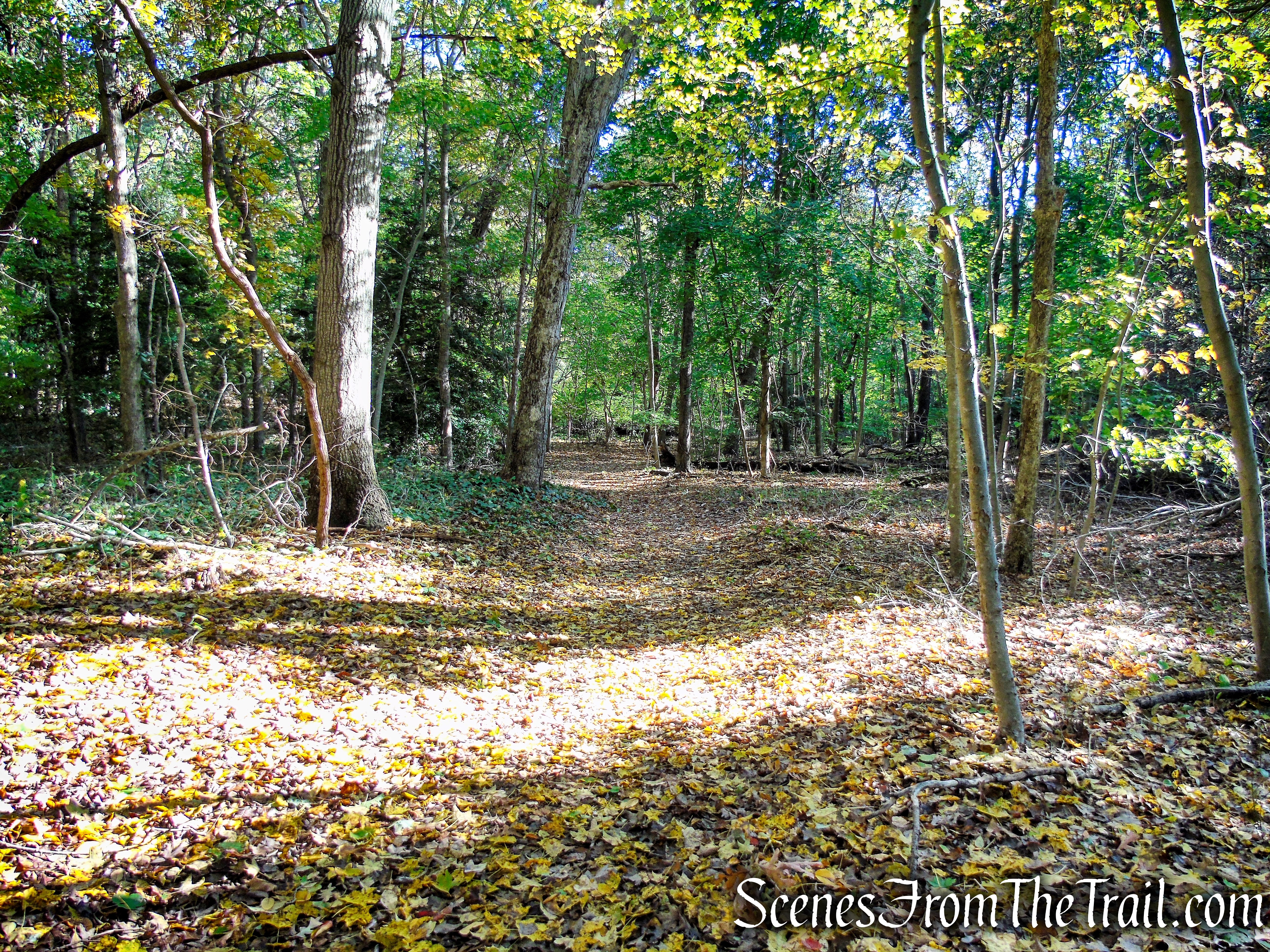 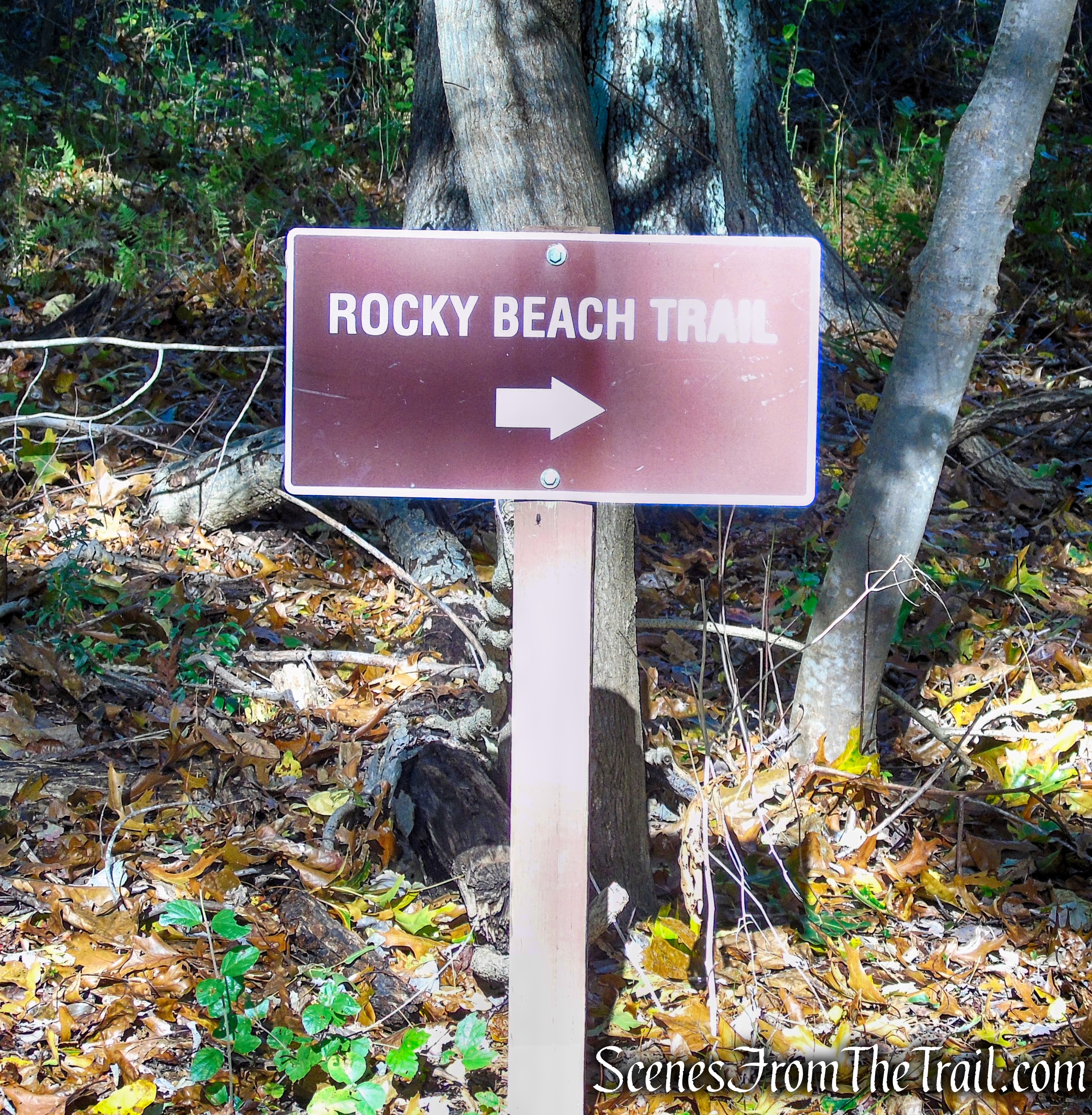 In about another 215 yards (past the kiosk), the trail reaches the Brackish Pond. Here, a bird blind is positioned overlooking the pond to observe wildlife.

The tide from Huntington Bay floods this pond daily and mixes with the freshwater from the surrounding watershed. The result is a pond with salinity lower than that of the Bay, teeming with life from plants to birds, turtles, mammals, and fish. 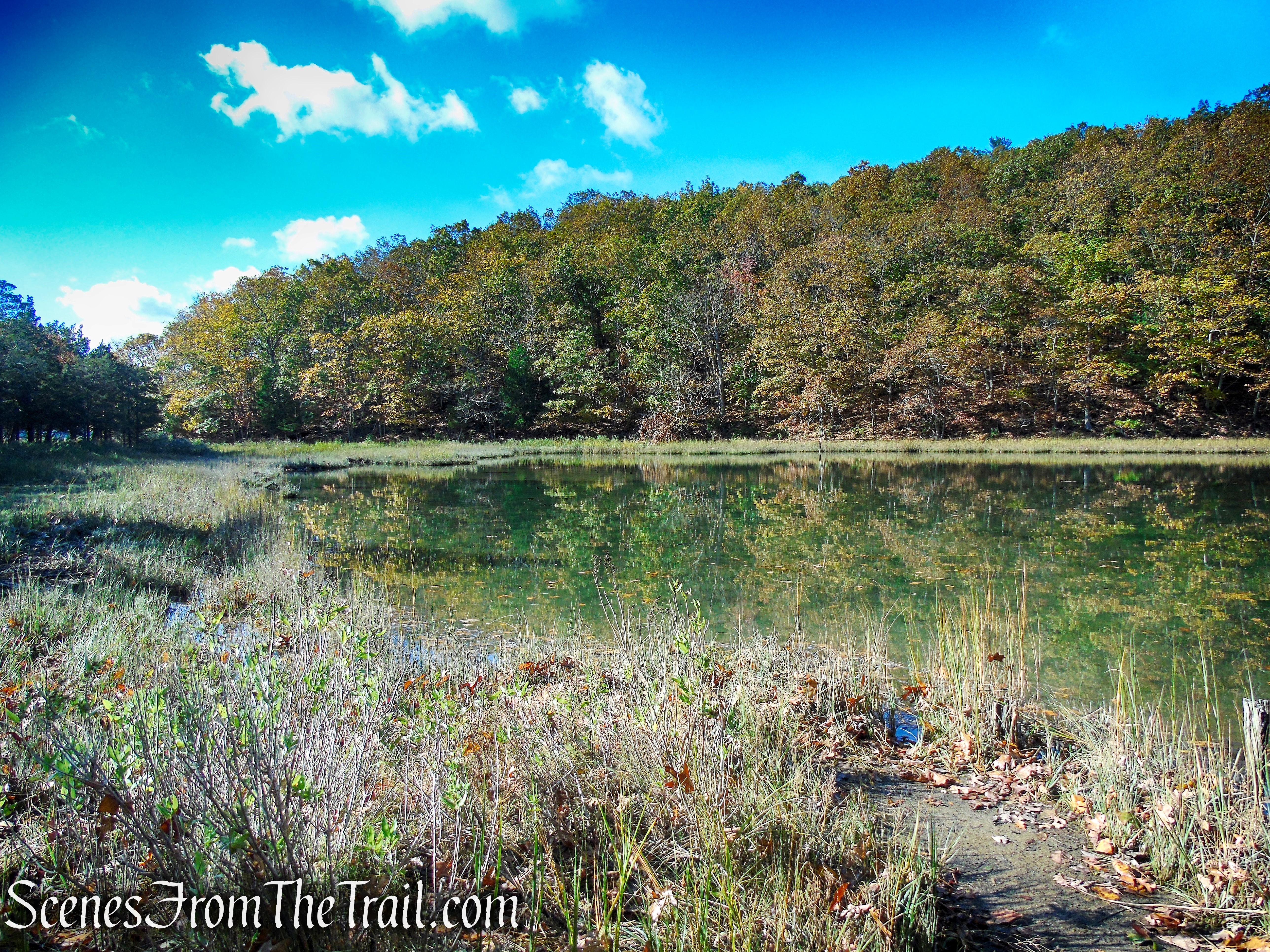 A short distance from the Brackish Pond, the Rocky Beach Trail ends at the beach. We turned right and began to walk the shoreline in a southerly direction.

After about 550 feet, we reached the boundary of the refuge and continued past it, Now walking on East Beach. 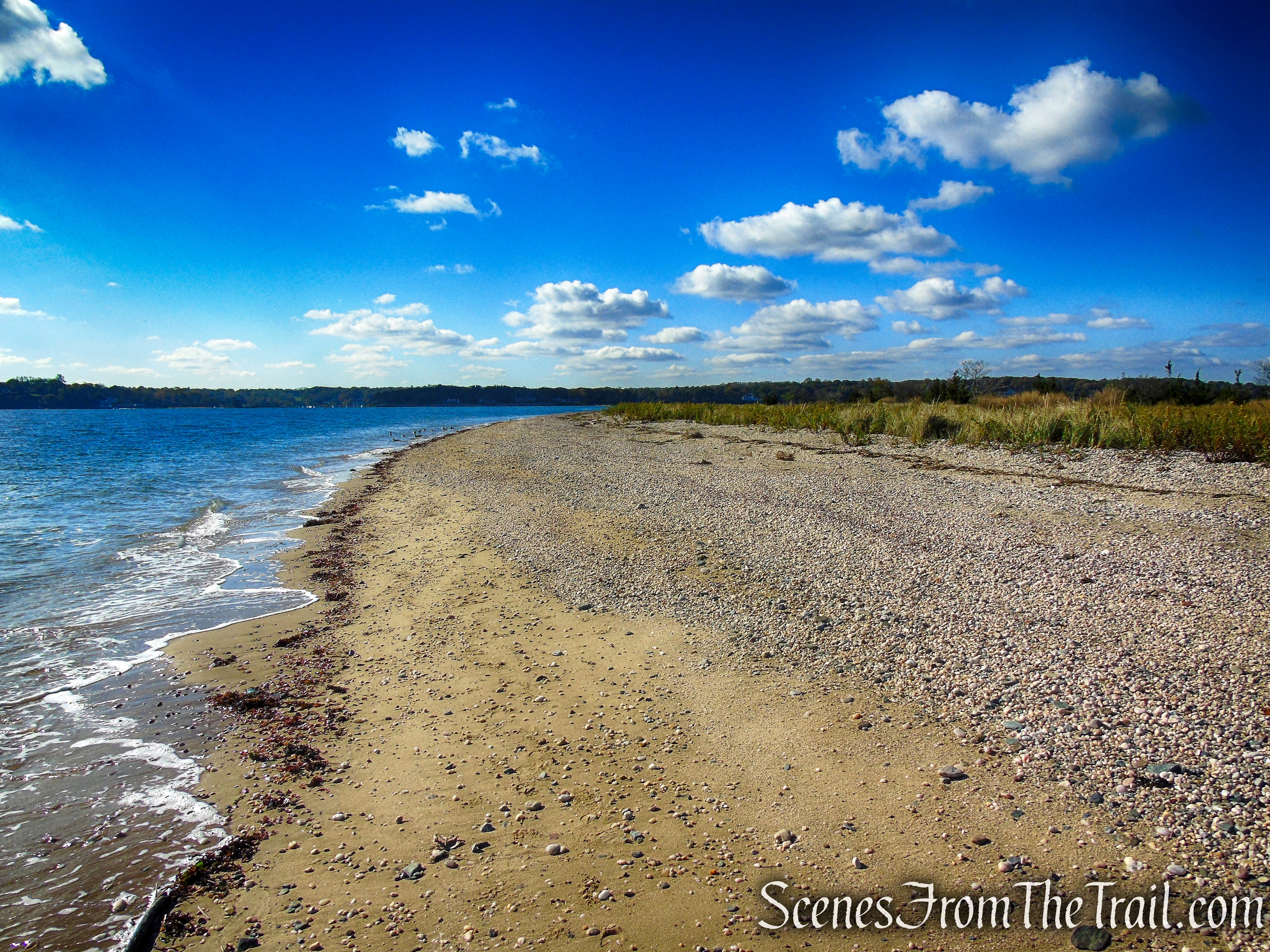 To the south, off in the distance, is the Huntington Harbor Lighthouse which was completed in 1912. 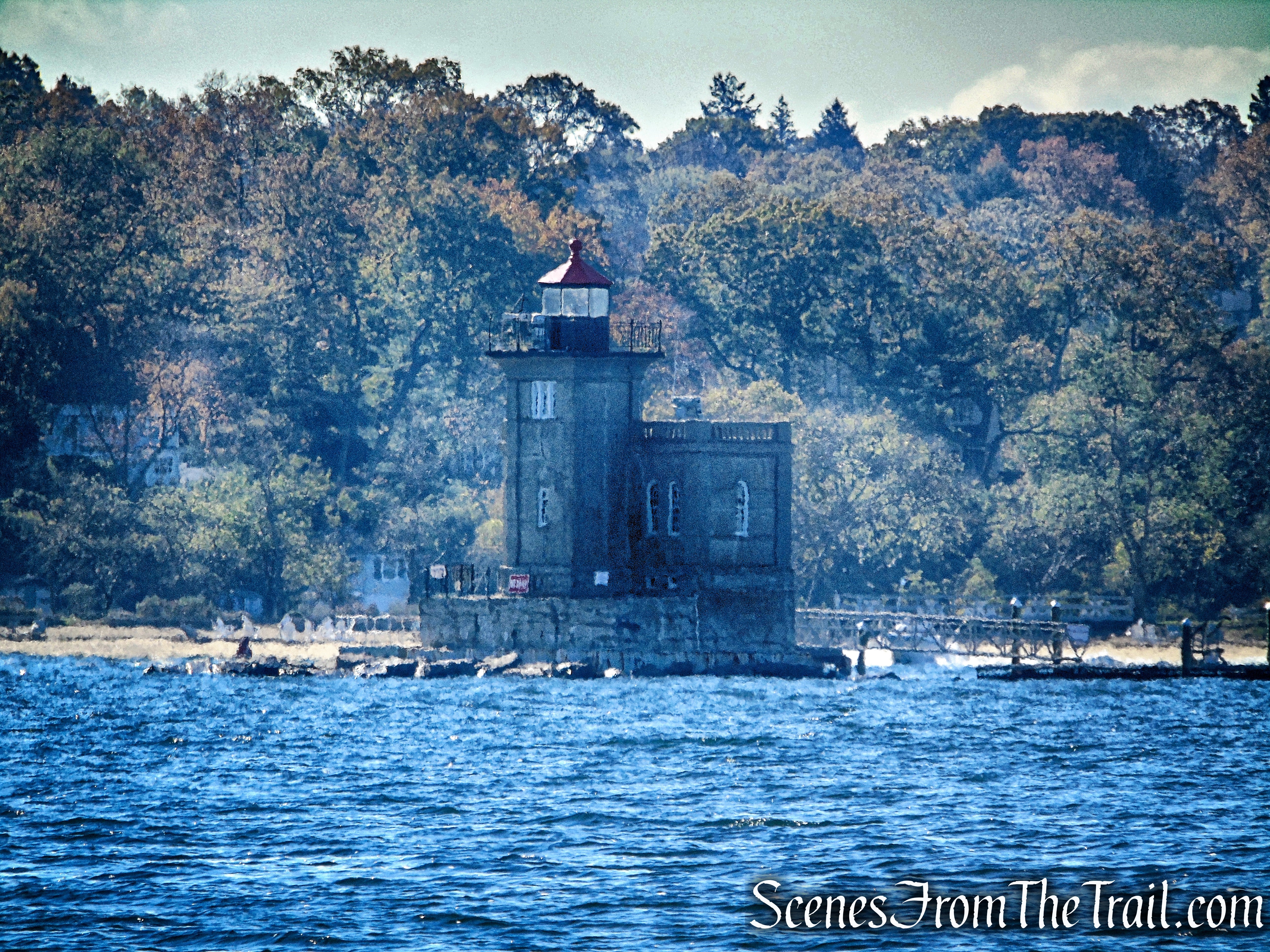 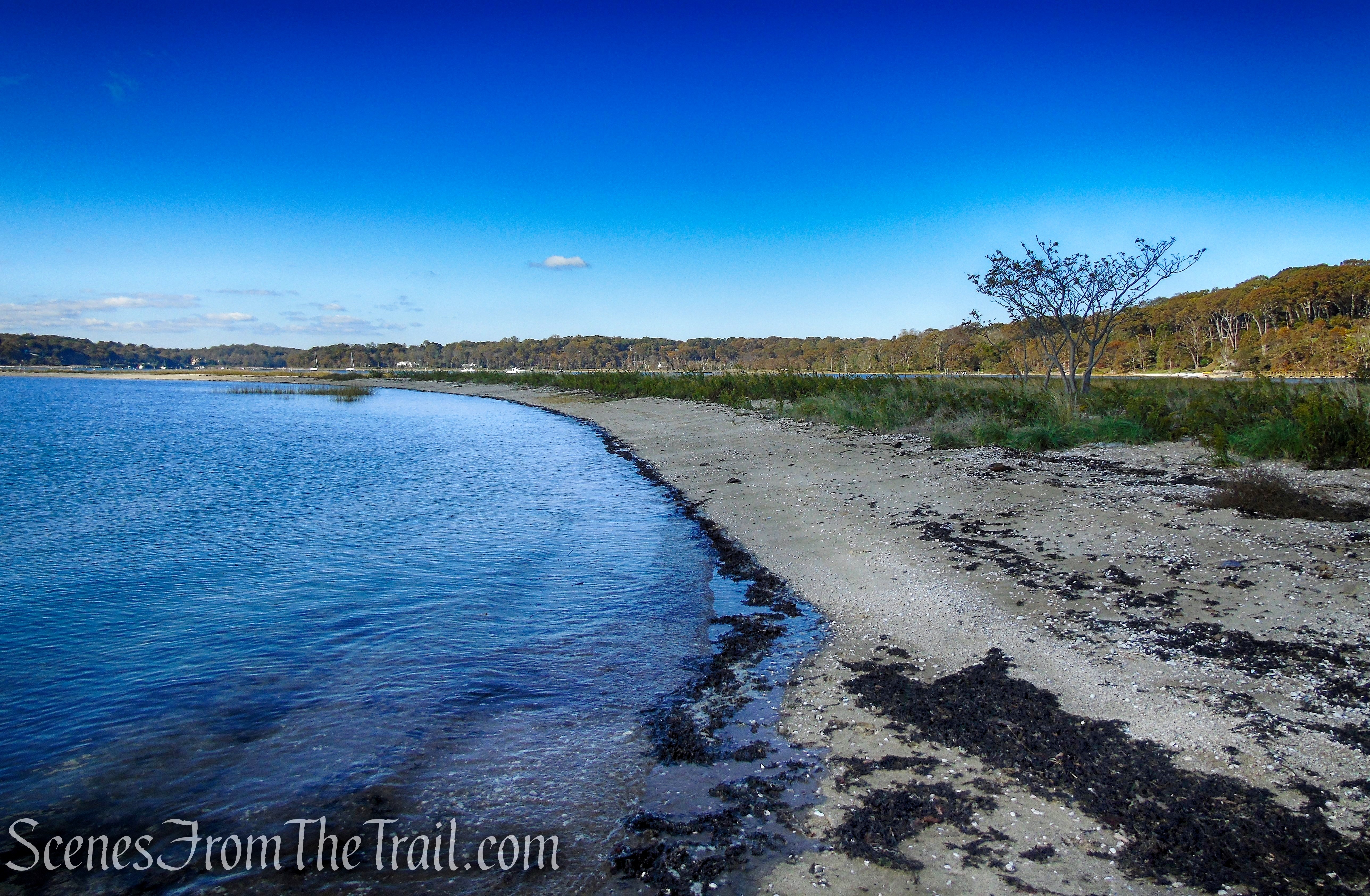 We continued following the shoreline of East Beach, stopping to observe the tidal flats of Lloyd Harbor, to the west.

We walked as far south as the sand and tide would let us. 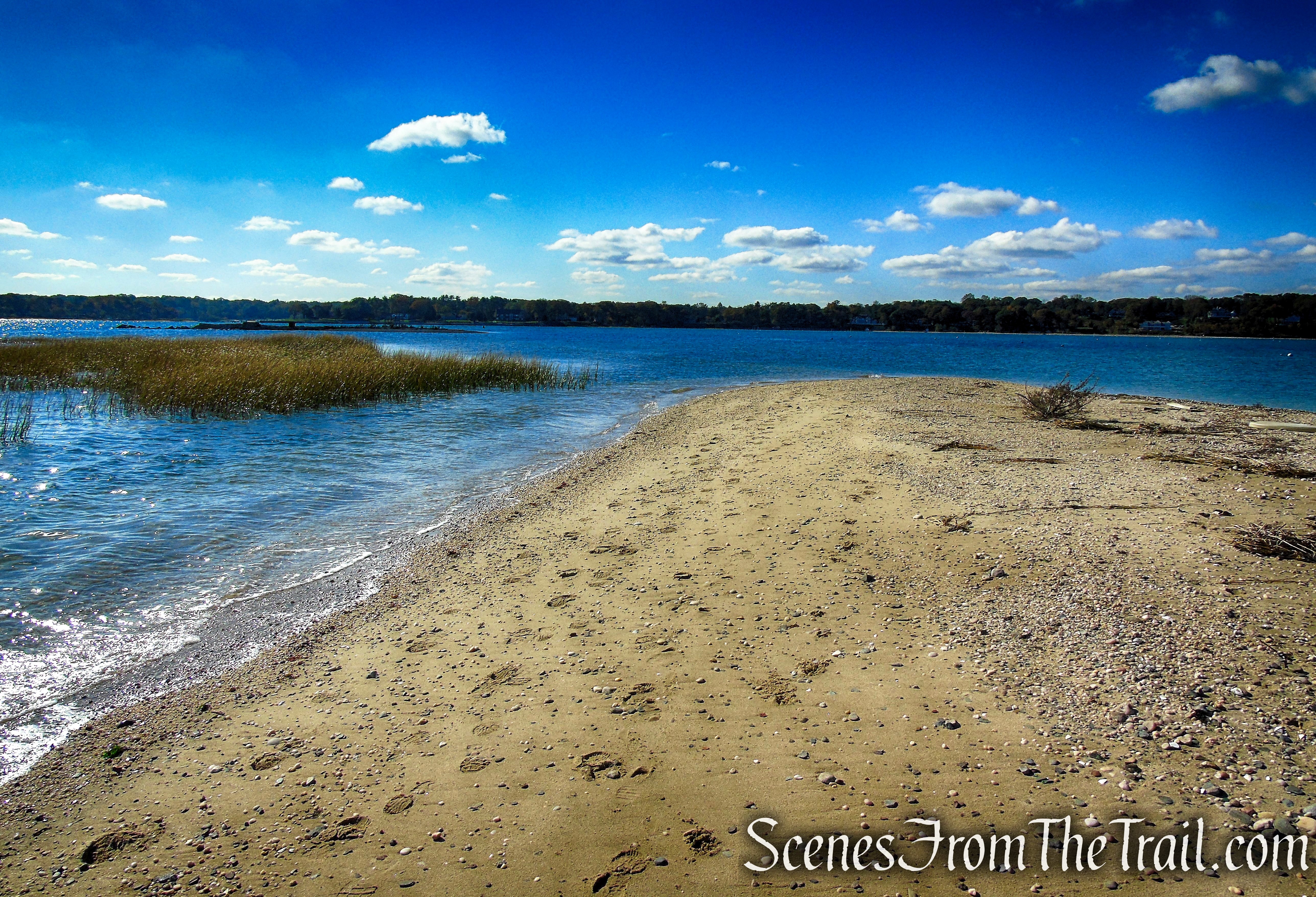 Just ahead, the remains of the Lloyd Harbor Light (1857-1912) can be seen. The lighthouse once marked the entrance to Lloyd Harbor. In lower tides, these ruins may be able to be reached on foot.

Lloyd Harbor Lighthouse was finished in 1857 and consisted of a two-story, wood-frame dwelling built on a brick foundation and attached at one corner to a square brick tower. A kitchen, dining room, and sitting room were found on the dwelling’s first floor, and three bedrooms on the second. The original beacon was a fifth-order, Henry-Lepaute Fresnel lens showing a fixed white light at a focal plane of forty-eight feet.

We then retraced our steps along East Beach, passing the junction with the Rocky Beach Trail and the Beach Access Stairs. 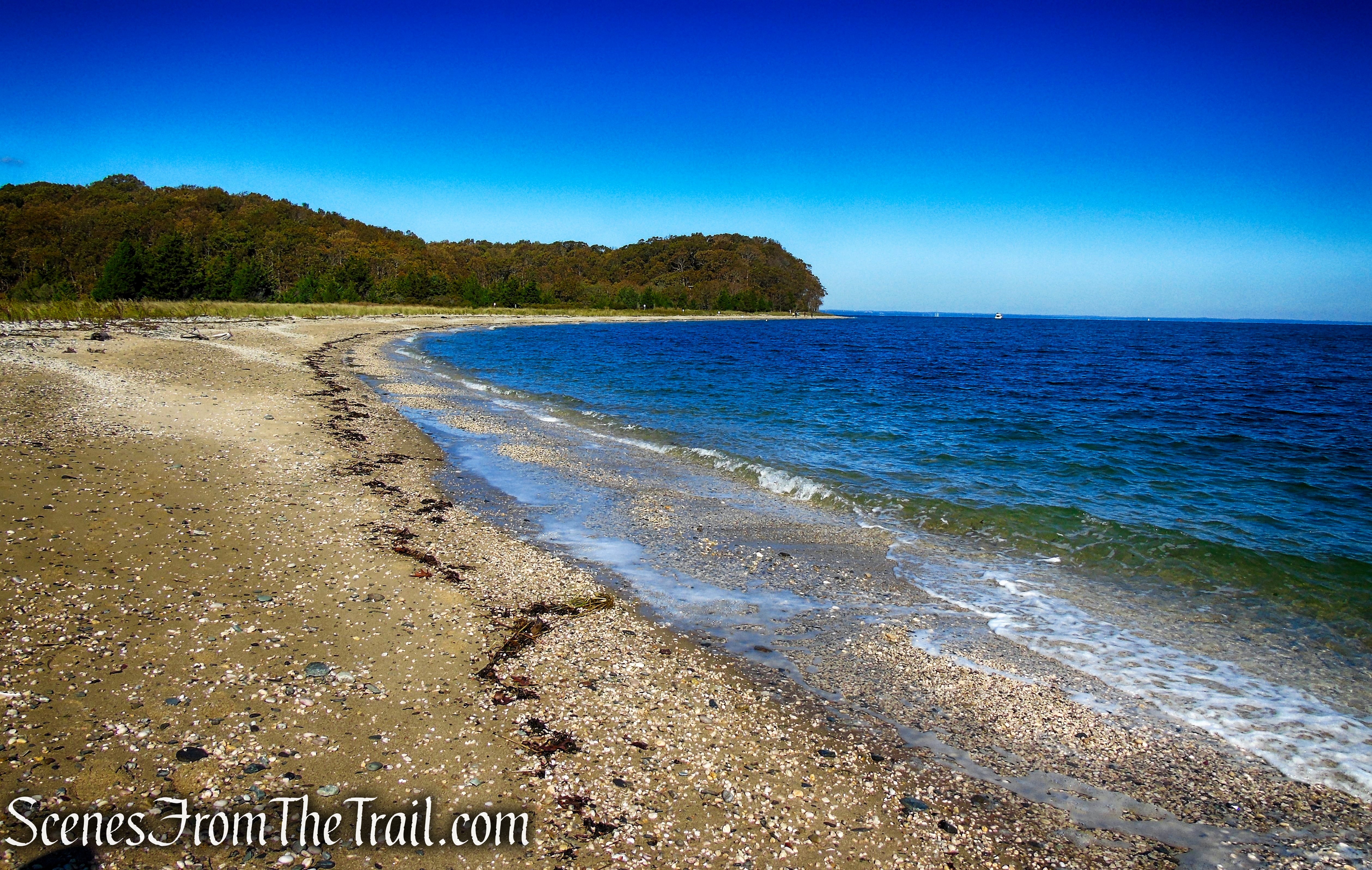 Just past the stairs, is Target Rock. During low tide, one can walk right up to the 14-ft. glacial erratic.

We then ascended the Beach Access Stairs and stopped on the platform that overlooks Huntington Bay. 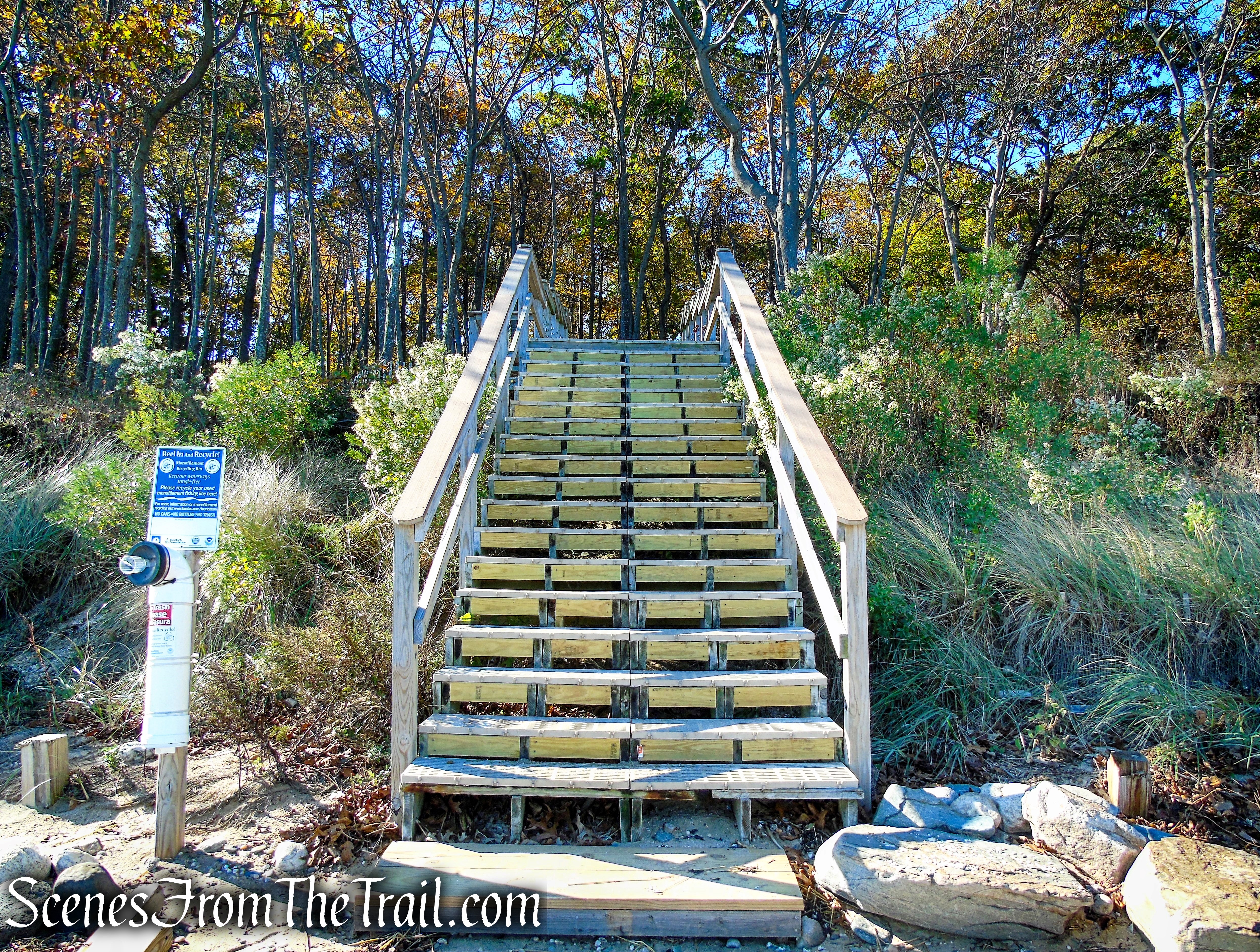 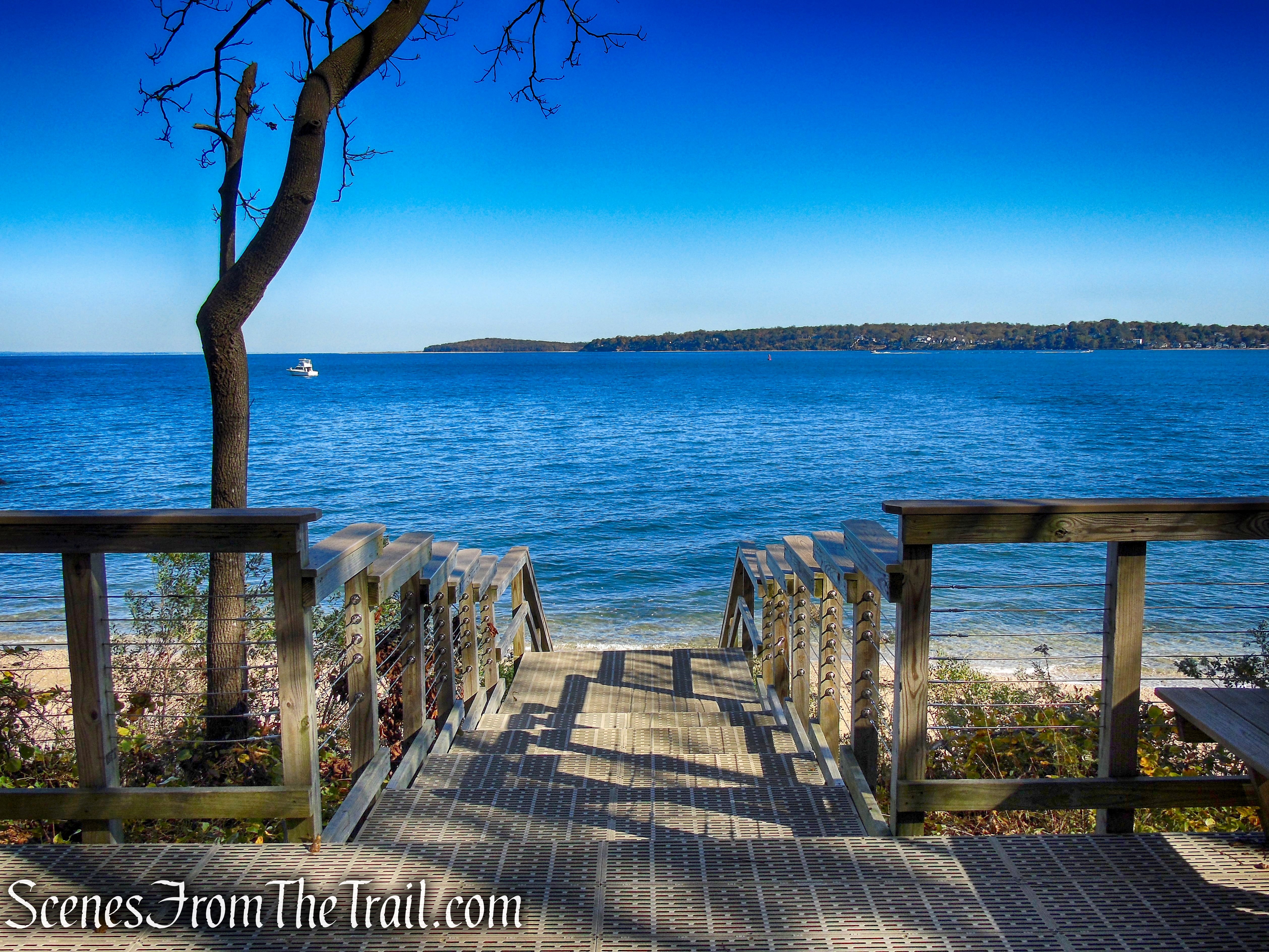 We walked along the Beach Access Trail and after about 100 feet, there is a spur trail that leads to a viewing area overlooking the beach.

The overlook is equipped with two benches and a viewing scope that lets you easily see birds perched atop Target Rock or the beach houses across the harbor. 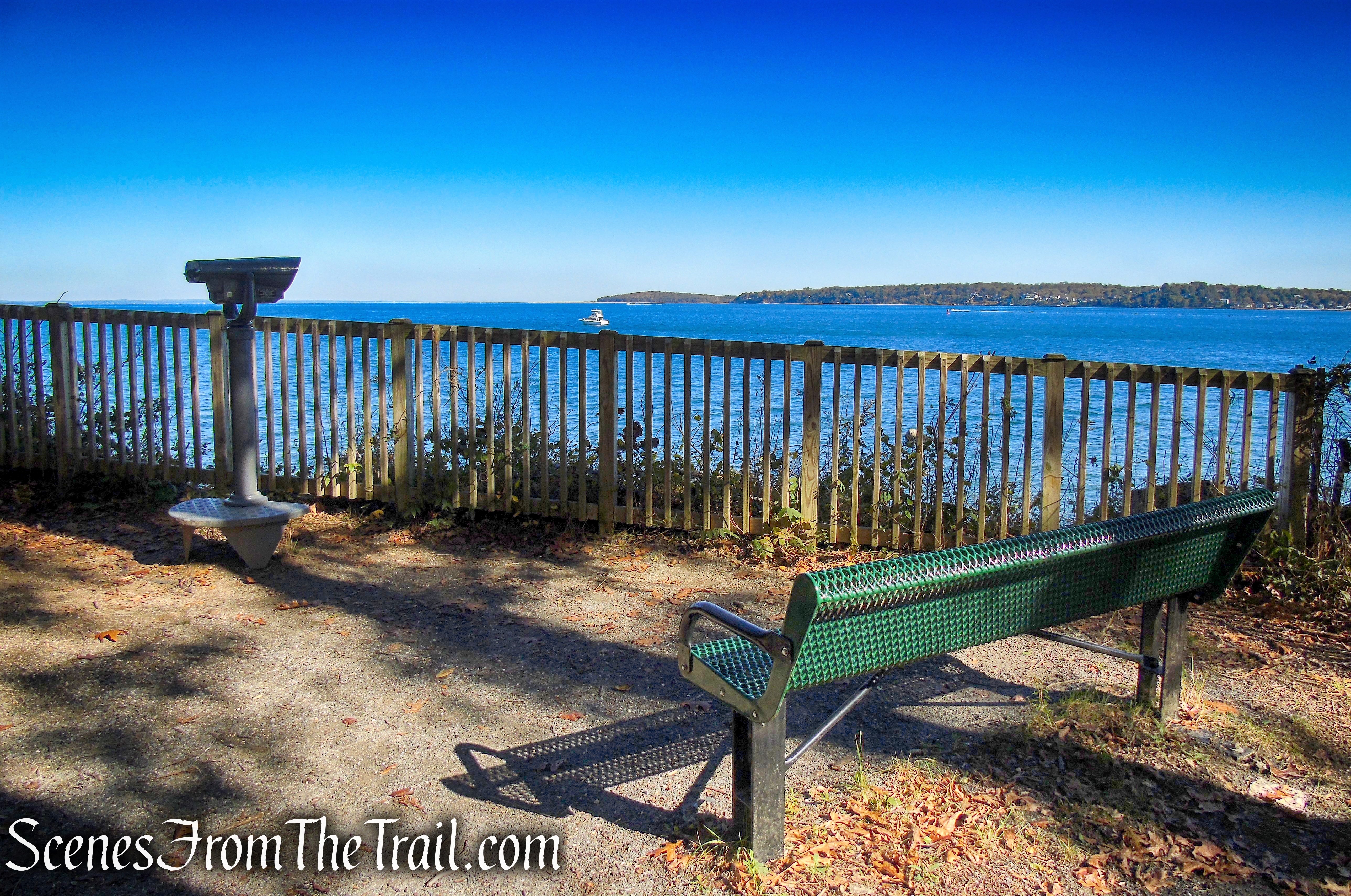 Soon the trail passes by an overgrown field. I believe that this was the site of the Eberstadt mansion.

A short distance later, the trail passes a kiosk and two private residences on either side of the trail, and then reaches the parking area, where the hike began. 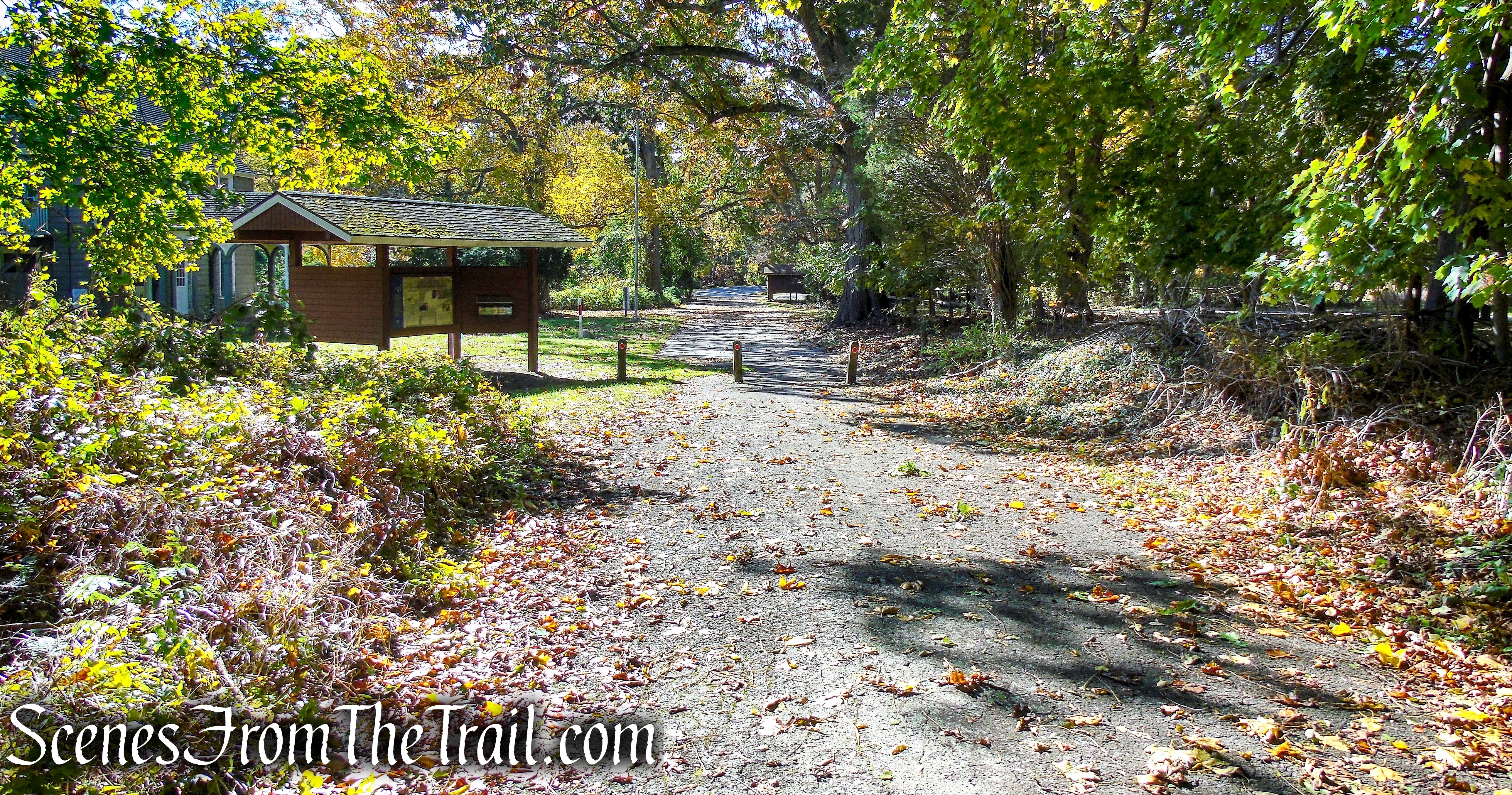 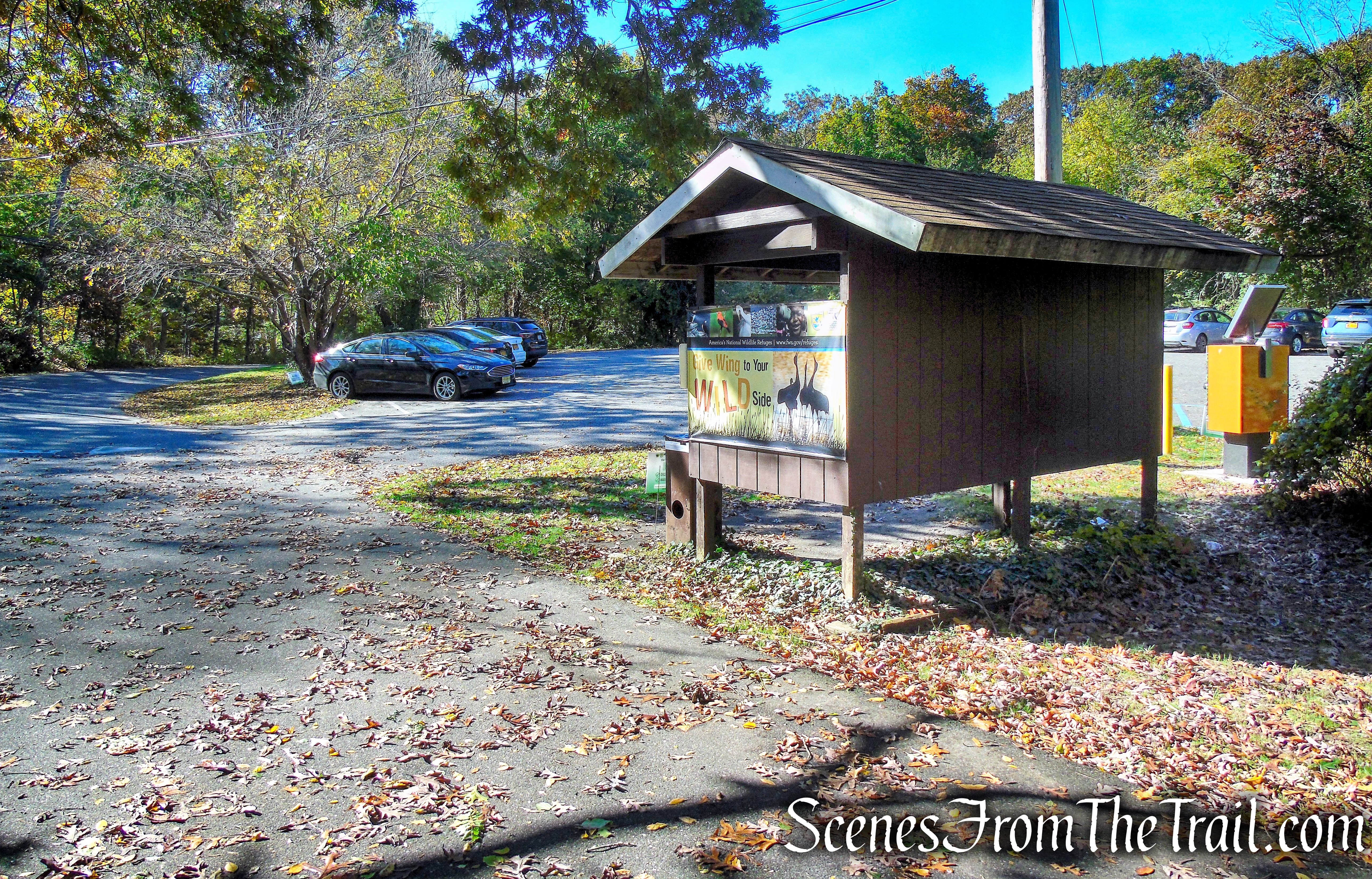 A well kept area that is far enough off the beaten path that it doesn’t see a lot of foot traffic. We had the place mostly to ourselves for the duration of our visit. Walking along East Beach was a bonus with only one other person in that area while we were there. The area around the Beach Access Stairs and Target Rock was a little busier, but still nowhere near crowded. This is definitely worth the road trip to spend a few hours outdoors.

With the exception of a hawk, a few deer and a dead raccoon, not much wildlife was moving around on the day that we visited. 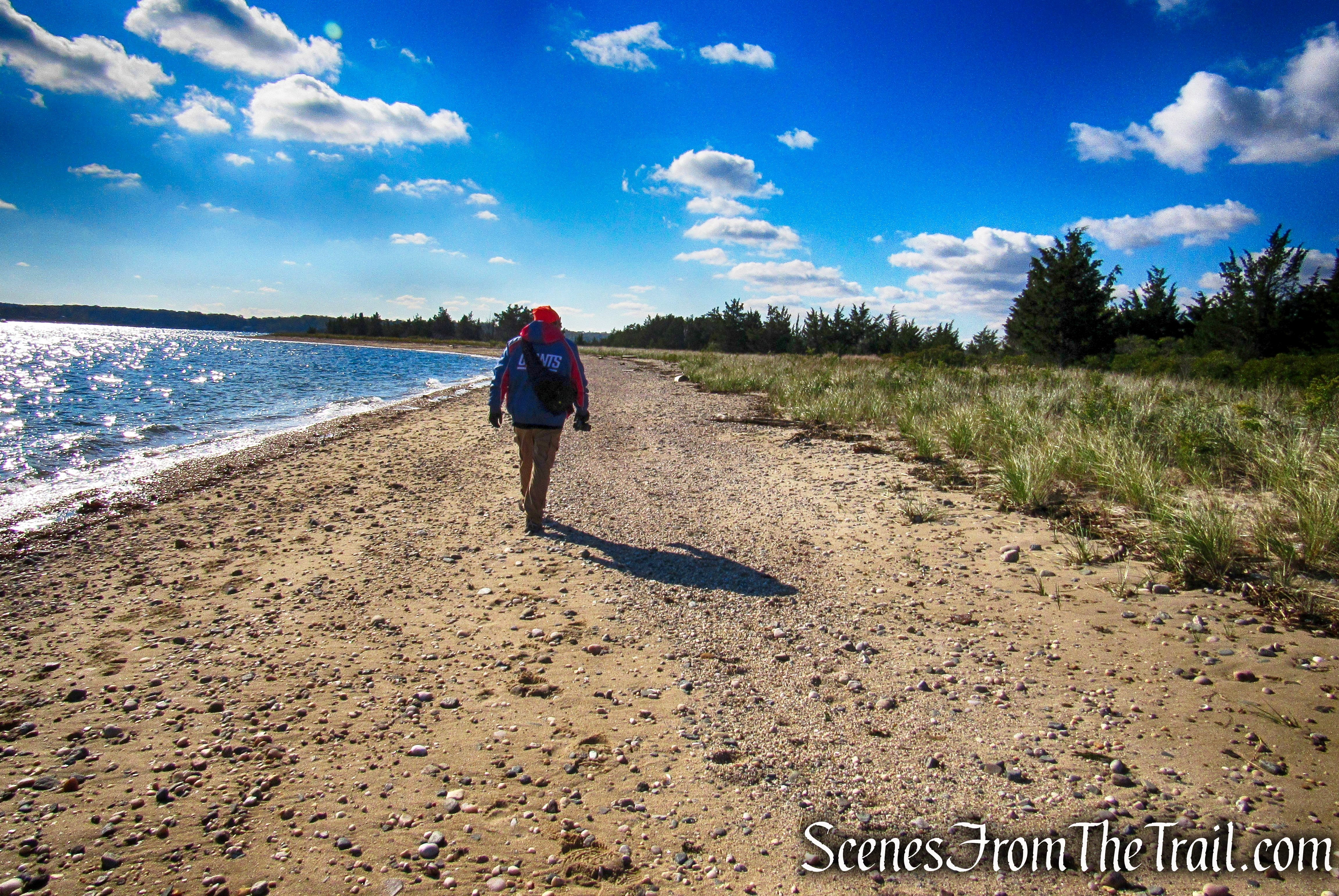