From atop the 1,683-ft. Mohawk Mountain, the view is literally forever on a clear day. The summit offers panoramic views of the Taconic Mountains and Berkshire Mountains to the north and northwest including Bear Mountain, Canaan Mountain, and Cream Hill in Connecticut as well as peaks in Massachusetts (Race Mountain, Mount Everett, Mount Greylock) and the eastern Catskills in New York State. 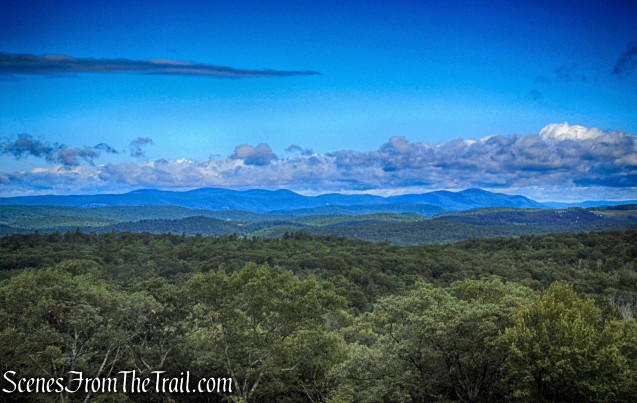 Mohawk State Forest, also known as Mohawk Mountain State Park, encompasses over 4,000 acres in the towns of Cornwall, Goshen, and Litchfield, in the southern Berkshires of Litchfield County, Connecticut. As overseen by the Connecticut Department of Energy and Environmental Protection, the area is used for hiking, picnicking, and winter sports by the public, while being actively managed to produce timber and other forest products. 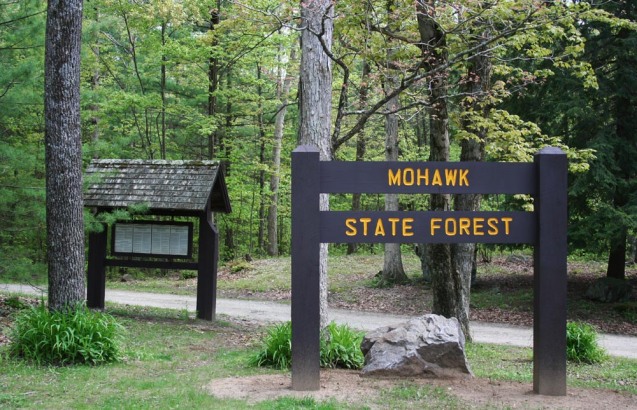 Mohawk Mountain is the highest point on the blue-blazed Mattatuck Trail, which passes over the summit. The northernmost section of the 42 mile long Mattatuck Trail, travels through the Mohawk State Forest in Cornwall, one of the most scenic woodland areas in Connecticut. Meandering beside streams and through rock walls, the trail climbs Mohawk Mountain and offers outstanding panoramic views from the Mohawk Overlook. The Mattatuck’s northern terminus is at its junction with the blue-blazed Mohawk Trail. 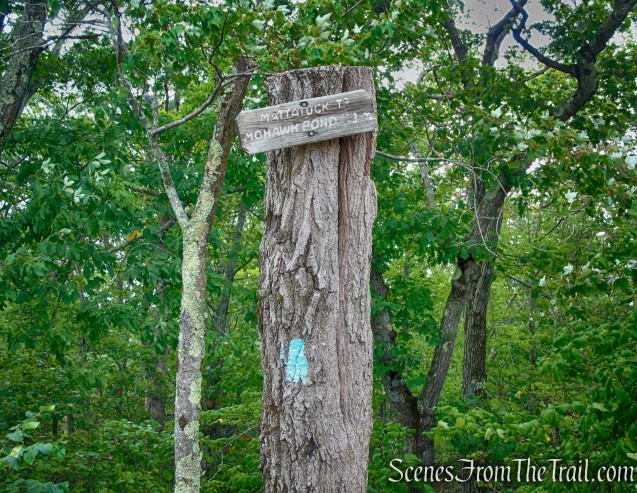 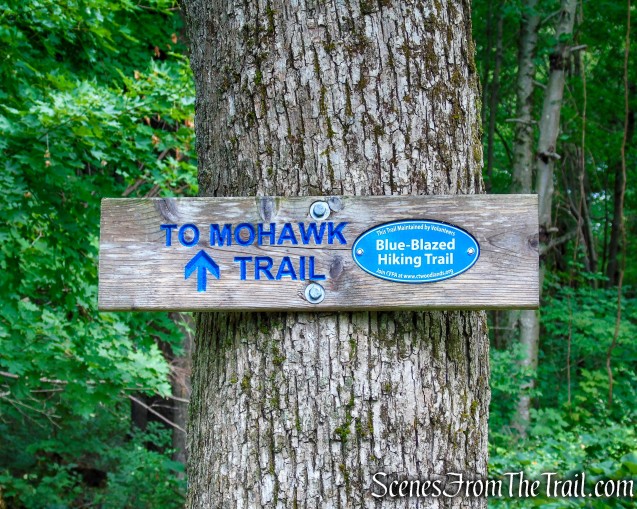 In 1882, a little over one acre of land on the mountain’s peak was purchased from the Hunts Lyman Iron Company by Cynthia J. “Nina” White and Henry Norton in order to build a tower for sightseeing. Outdoor recreation and the enjoyment of nature had become popular all over the country.

Mohawk Tower opened with great fanfare on July 4, 1883 and quickly became a popular picnic site. For twenty-five cents, visitors could climb the 40-ft. tower and use a telescope to enjoy the view. By 1890, interest in maintaining the tower dwindled, and it fell into disrepair. By 1892 the tower was unsafe to climb, and the cabin was looted and began to fall into ruin. The wooden tower was finally knocked down by a strong wind in 1898.

In 1912, Litchfield resident Seymour Cunningham began acquiring land on Mohawk Mountain. After acquiring the land, Cunningham erected a new circular stone tower on the northwestern side of Mohawk Mountain, just below the summit. The new structure was thirty feet in circumference and thirty feet high, and referred to as “Aerie.” 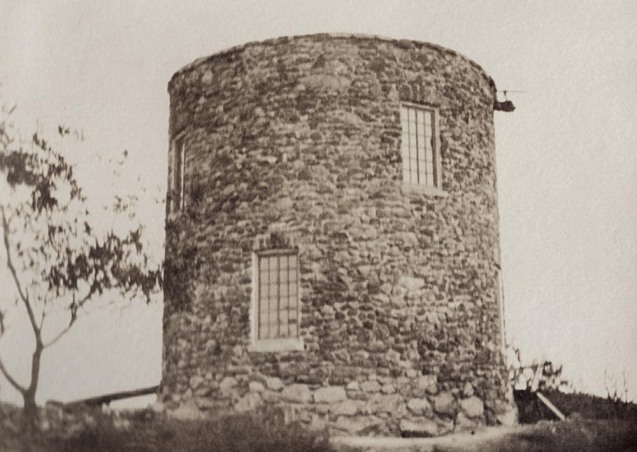 In 1917, Cunningham’s neighbor on Mohawk, Andrew Clark, donated five acres of woodland to the Connecticut State Park Commission, the first tract of what was to become Mohawk State Forest. It was known as Mohawk Mountain Park until the 1920’s.

In 1921, the White Memorial Foundation donated approximately 1,200 acres of land on Mohawk Mountain to Connecticut. This included Seymour Cunningham’s property, which had been acquired by White Memorial in 1920. Mohawk Mountain Park was joined with this larger tract to form Mohawk State Forest. In total, the White Memorial Foundation contributed over 2,900 acres to the acquisition of the forest. One of the conditions of the gift of this forest was that a lookout station should be erected and maintained on the summit of the mountain.

During the spring of 1922, with the assistance of the White Memorial Foundation, a rough 35-ft. timber lookout tower with an enclosed cab, was constructed by contract on the summit of Mohawk Mountain. Braced by four legs on the bare glacial rock, it was ungainly looking, but it stood firm for ten years. Cornwall’s first Fire Warden, Henry J. Bouteiller walked to the tower daily during fire season. 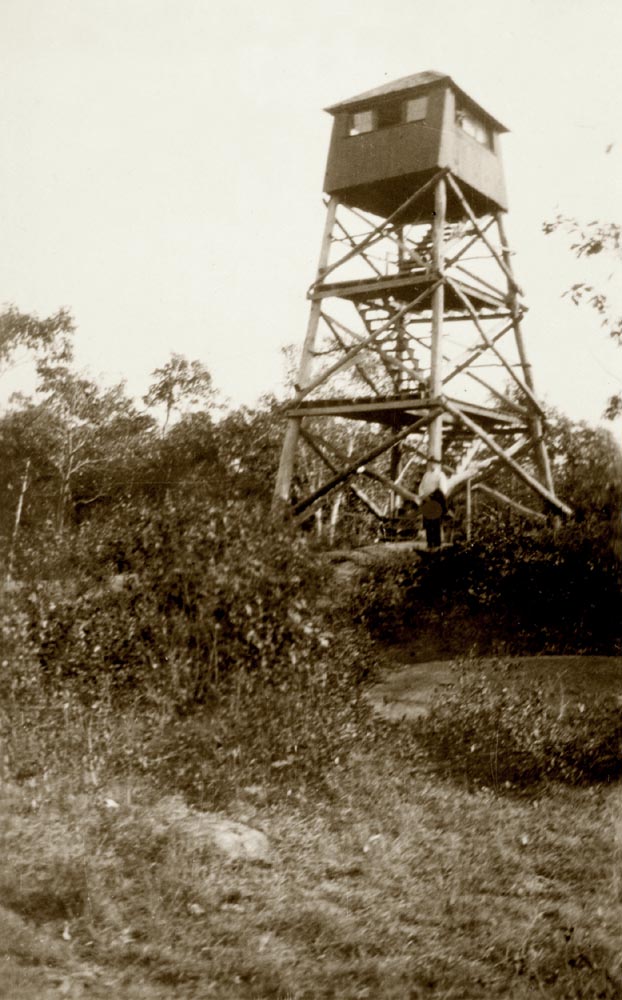 The Civilian Conservation Corps’ (C.C.C.) Camp Toumey was stationed at Mohawk State Forest from June 25, 1933 to July 26, 1941. Named for James W. Toumey, Dean of the Yale School of Forestry, this camp was originally designed as a camp exclusively for veterans of World Was I and, as such, the enrollees were older. But as the veterans’ need for employment waned, younger enrollees were gradually added to the camp. Some of the projects and accomplishments included: fighting forest fires; making improvements on the Old Farm House and renovations to the Old Hart House; construction of the Western District saw mill, a sawdust storage shed, a warehouse, and the lumber shed that served the entire western half of Connecticut. The camp also included a carpentry and cabinet shop which produced furniture, doors, and trim wood. 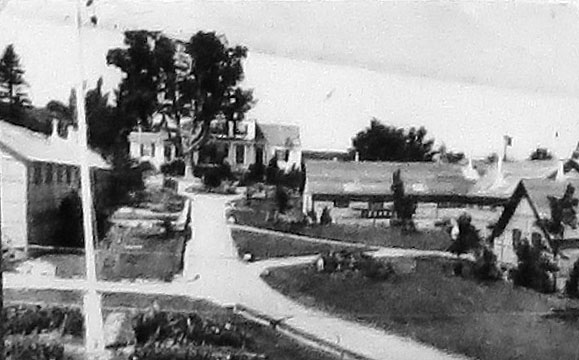 In 1937, the Civilian Conservation Corps (C.C.C.) took down the wooden 1922 tower and erected a new steel lookout tower that was 37-ft. high with a cab for fire watchers. For the next sixteen years, the public could enjoy climbing the tower on weekends and holidays for much of the year. Ted Starr served in the tower from 1945 to1953. 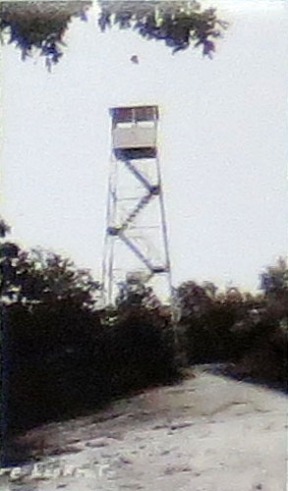 The structure, which was located by the parking area at Mohawk Overlook (at the end of Toumey Road), is no longer standing, but the concrete pillars can still be seen. 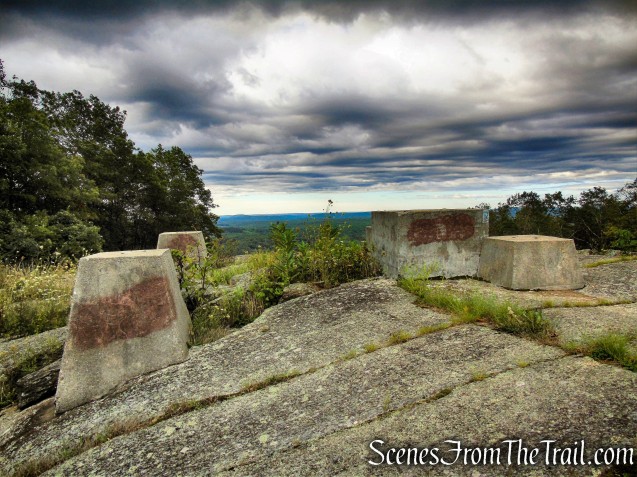 In 1953, the State of Connecticut made an arrangement with AT&T to place a booster microwave repeater at the summit. They took down the CCC tower and in order to receive permission to build one on state land, AT&T agreed to put a cab on the top of the tower for the fire lookout and the fire detection apparatus. The new 65-ft. AT&T tower was kept locked at all times and was surrounded by a ten-ft. mesh fence. On the ground floor, in the building, are the instruments for the relay station. Since repair crews must be able to reach the tower at all times, throughout the winter, Tower Road is kept plowed by Connecticut State Highway crews. This tower has changed ownership over the years and has been modified, but still stands today and is still off limits to the public. 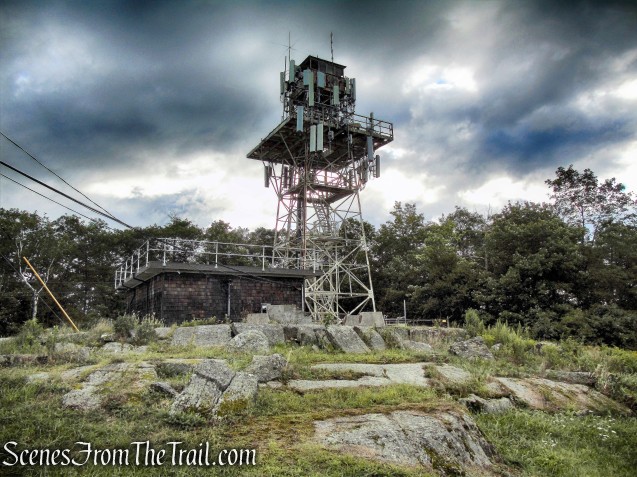 During the 1960’s, a group led by Cornwall residents complained that there was no way that the public could enjoy the views from the summit of Mohawk Mountain. The vegetation was growing, blocking the view and the AT&T tower was always locked. Eventually the protest was noticed and around 1974, the former 40-ft. lookout tower on Booth Hill in Hartland was moved to the Mohawk summit. A new wooden cab was built by Edwin Palmer of Cornwall, a State Forest carpenter. An area to the south was cleared so that people could again look down on Mohawk Lake and out at the Litchfield Hills. 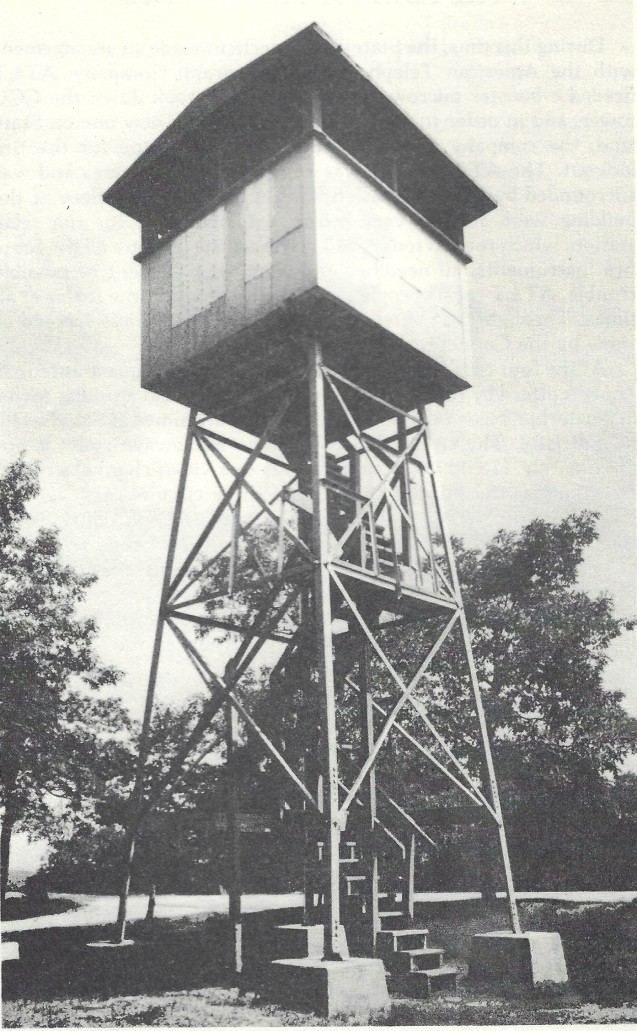 This tower was removed from Mohawk Mountain in September of 2008. 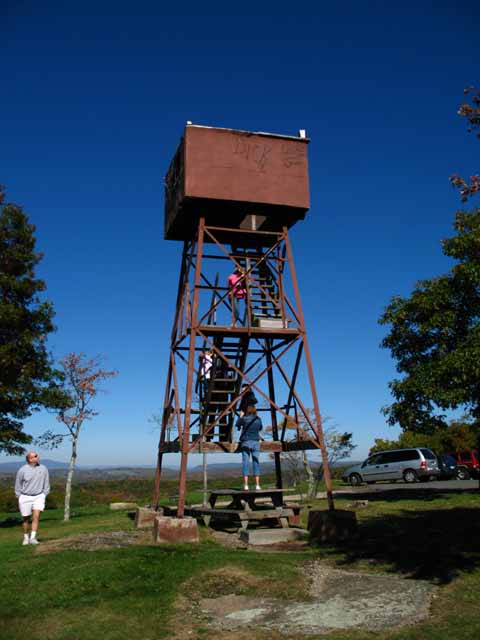 The concrete footings are still visible at the summit. 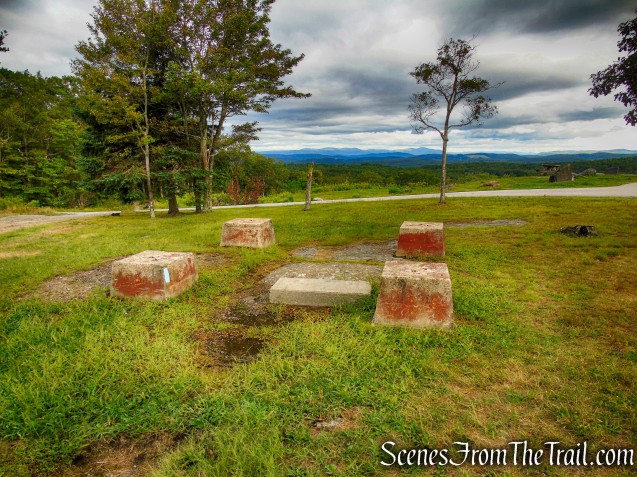 Presently, there are two towers at the Mohawk Overlook that are off limits to the general public. The now gutted Cunningham Tower sits below the summit, and offers no views.

Although there are no accessible towers at the summit, the Mohawk Overlook provides visitors with outstanding views. One can drive right up to the summit (April – November) and enjoy the scenic vistas while enjoying a picnic. 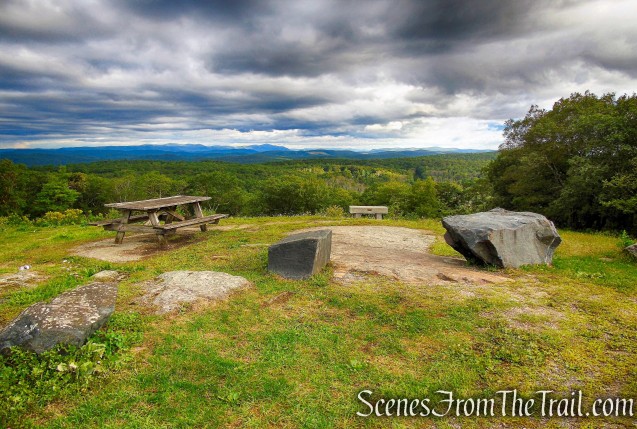 If you arrive early and are lucky enough to secure the lone grill at the summit, you can grill some breakfast while enjoying the panoramic views. 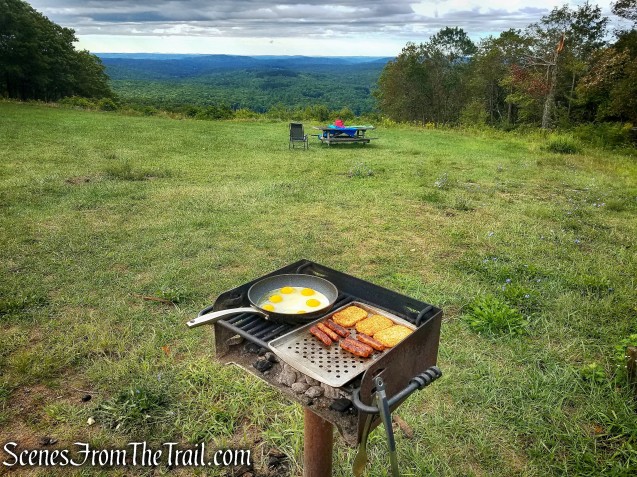 From atop the 1,683-foot Mohawk Mountain, the view is literally forever on a clear day. 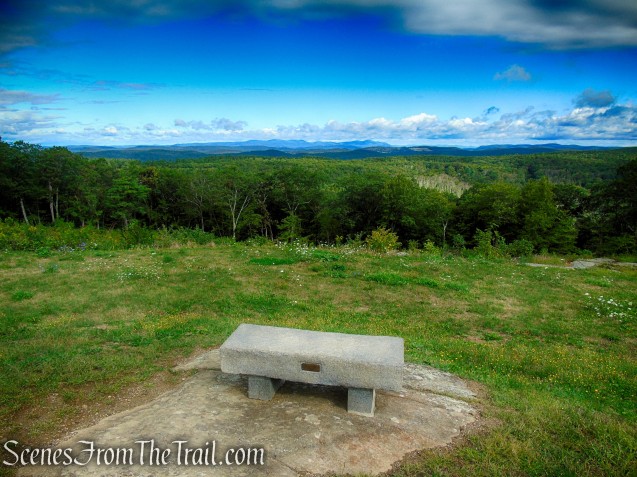 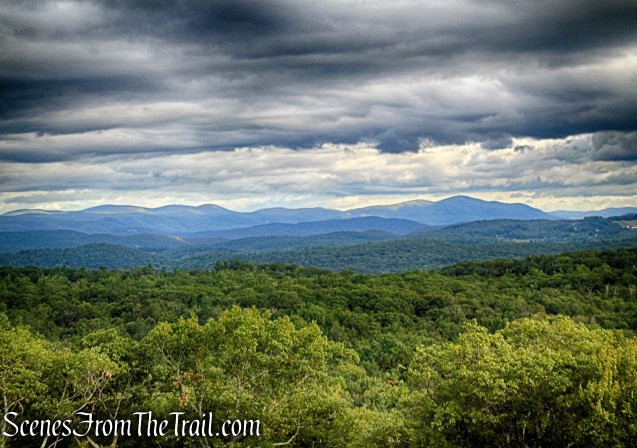 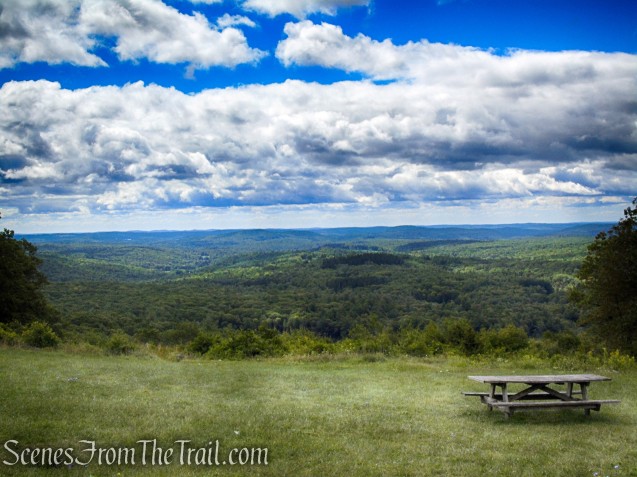 When you are done admiring the views, you can drive down the road and check out Cunningham Tower. There is a gate with two stone pillars and shown on Google Maps as Cunningham Tower Trailhead. There is room for several cars along the road. 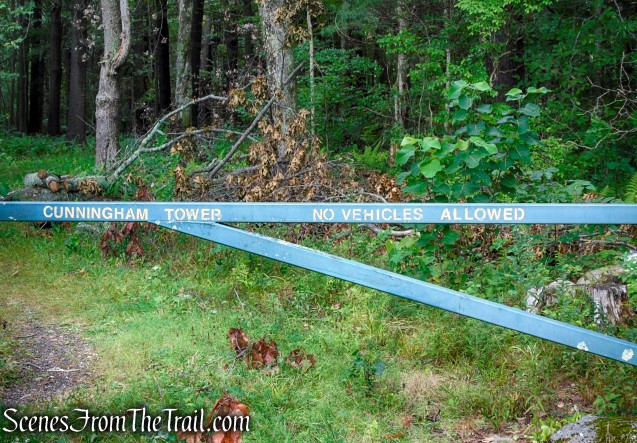 Proceed past the gate and follow the old road into the woods. Soon the road curves to the left and joins the blue-blazed Mohawk Trail, a short distance later, the tower will come into view. 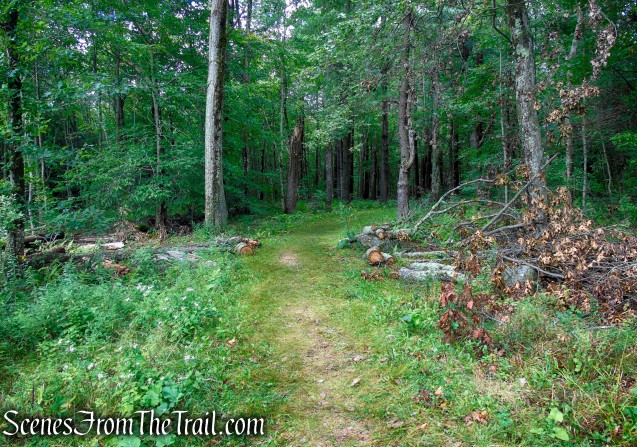 Just ahead is the two-story fieldstone structure. 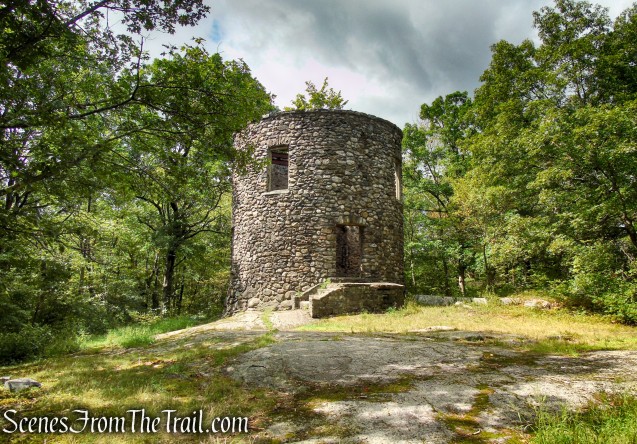 The trees around the tower have grown tall, so there is no view of the surrounding area.

The tower is open for all to explore, although it is mostly just a shell. 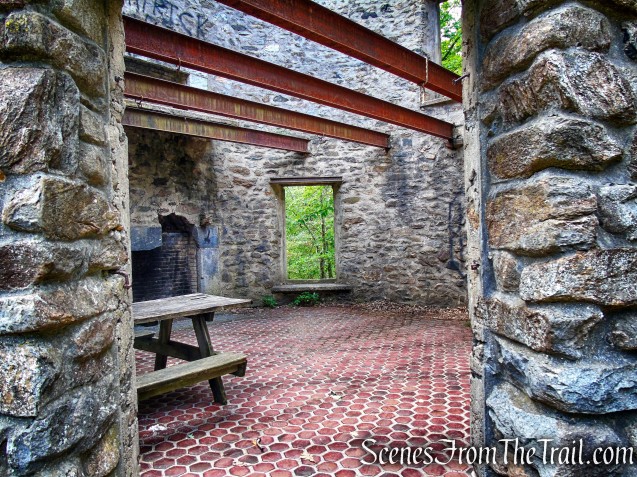 The red tiled floor seems to have weathered well. 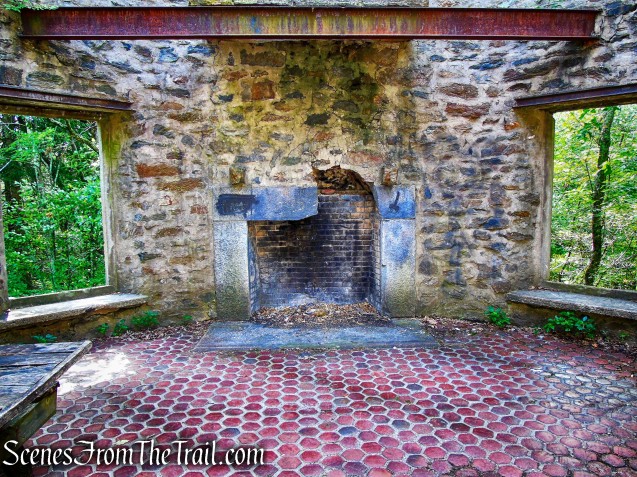 The fireplace is still used on occasion. 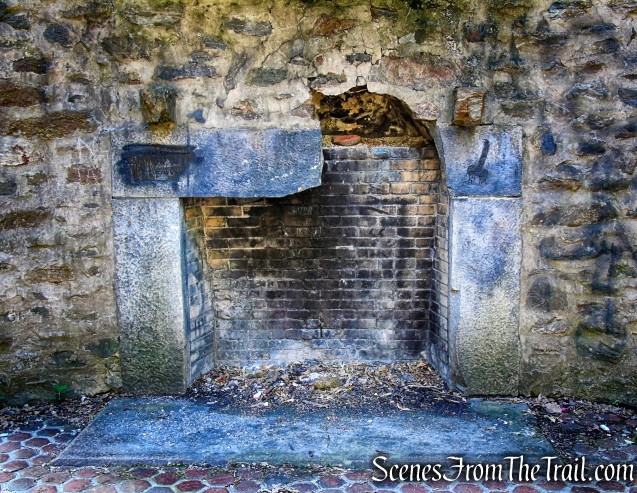 A keystone in the wall next to the fireplace reads: “Seymour Cunningham, Fecit, MCMXV.” Translated from Latin, the word “Fecit” is used on artwork (such as a painting, sculpture, engraving, or building) to identify its creator. “MCMXV” = 1915, the year it was built. 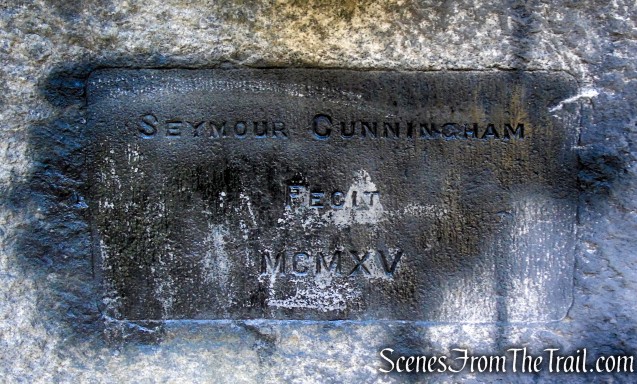 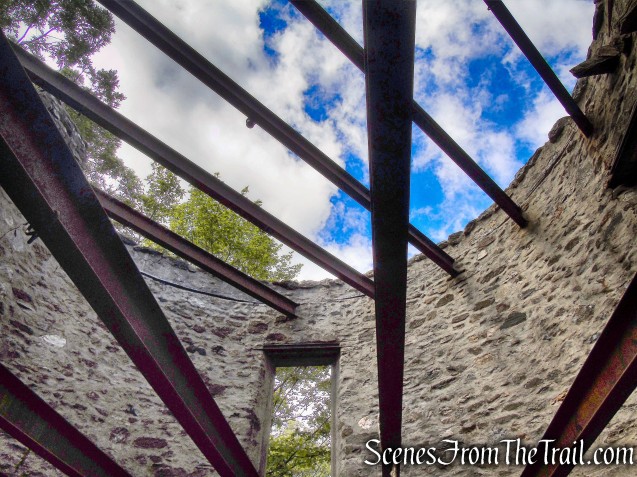 The stone steps leading to the second floor have been broken off and all that is left is the twisted steel railing that climbs the wall. 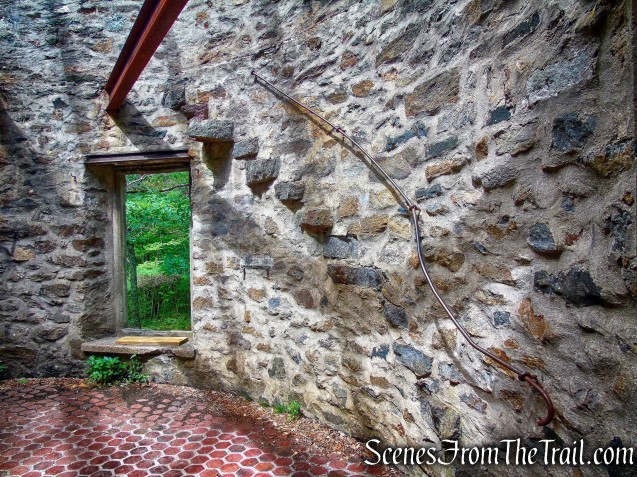 If you are in the area, or just want to take a day trip, the Mohawk Overlook in Mohawk State Forest is definitely a great place to visit. Hikers and tourists alike will enjoy the panoramic views and the historic stone tower.