On Thursday May 26, 1983, Rex Miller (26 years old) took off in his Piper PA-28-140 (registration: N1316T) from Poughkeepsie, NY at approximately 9:12 am heading for Watertown, NY. Before departing, the manager of a flight school informed him that the weather was bad, with poor visibility due to fog and overcast skies. Miller, with a student certificate that had been previously revoked by the FAA for violations and no flight plan, ignored the warning. At approximately 9:48 am his plane collided with trees at the top of mountainous terrain at an elevation of approximately 3400 ft. After the initial impact, his aircraft continued about 500 ft. before coming to a stop in a wooded area atop Stoppel Point. Mr. Miller was the only passenger and he did not survive the crash.

The Catskill Mountains are littered with plane wrecks and make for interesting destinations when mapping out a hike. I had wanted to do this hike for several years, but was hesitant. The Catskills are a little out of my comfort zone and with the exception of Overlook Mountain and several other areas, I have never explored the area. Living two hours away, the rugged terrain and vast wilderness that I was unfamiliar with were good enough reasons to keep putting this hike on the back burner. Fast forward a couple of years, with thousands of miles on the trails under my belt and increased confidence, the time was right. 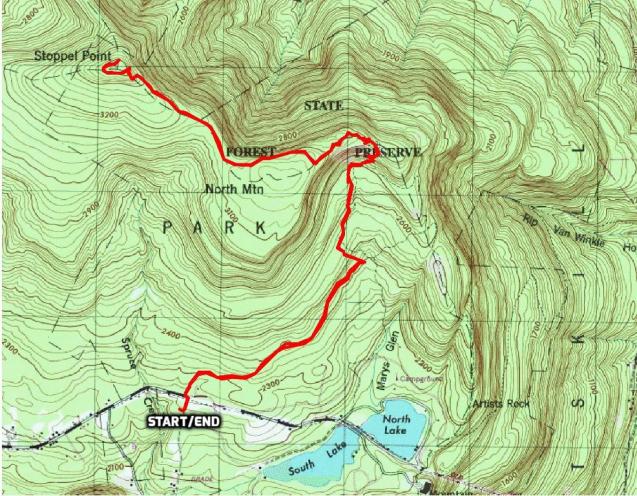 We arrived at the Scutt Road Trailhead Parking a little before 9:00 am to insure that we could secure a parking spot. From my understanding, the sizable lot fills up quickly and we didn’t want any hassles on hike day. Partly cloudy and temps in the mid to high 50’s, would make for a nice day on the trails. The hike began at approximately 9:30 am and the five of us began our journey to Stoppel Point. We headed out on Scutt Road and walked back to North Lake Road. We would be taking the yellow-blazed Rock Shelter Trail for the first 1.3 miles to the red-blazed Mary’s Glen Trail.

Crossing the road we ducked into the woods and began hiking the Rock Shelter Trail.

Like the name implies, the trail is rocky. The trail climbs gradually through the forest.

The Rock Shelter Trail is also wet for much of the way, which makes for slippery rocks and muddy terrain. 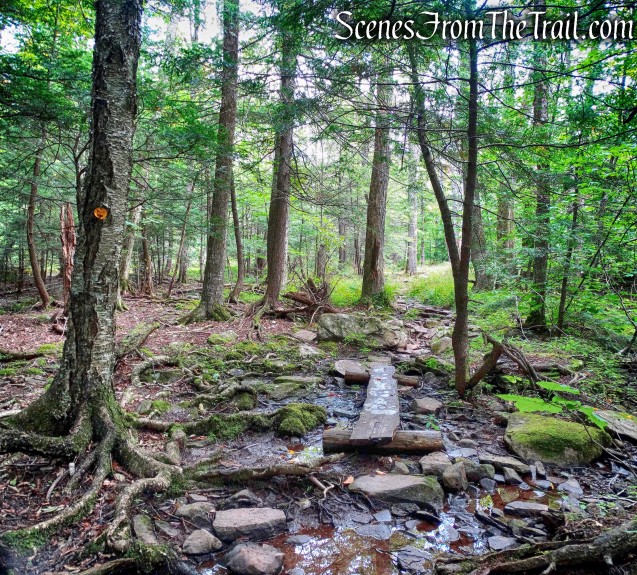 In a short distance we came to the trail register and signed in.

The Rock Shelter Trail is a real ankle breaker. First rocks and water then some good old roots to make you have to constantly look down to avoid tripping.

After a modest gain of a couple hundred feet of elevation, we came to a junction with the red-blazed Mary’s Glen Trail. Our next stop would be North Point and some outstanding views.

The red-blazed Mary’s Glen Trail ascends steadily over rocky terrain and in a short distance comes to a waterfall just off the trail to the right. I have seen it referred to in print as “Ledge Falls,” but I am not positive, although the name fits. As often is the case at this time of the year, the falls were nothing more than a trickle. The photos that I have seen online, show water cascading the full length of the ledge. 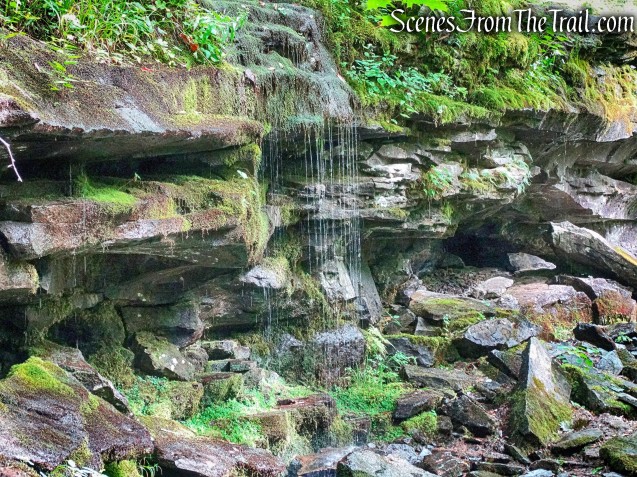 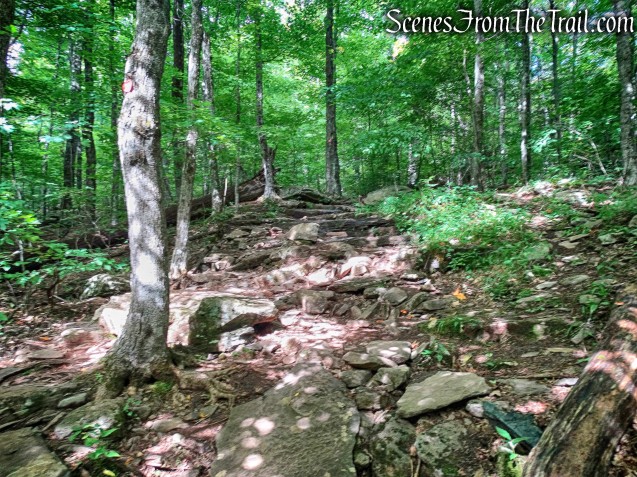 Climbing over rock ledges we made our way towards North Point.

The trail does level off in some spots as we made our way over rock paths laid out by trail crews over some wet areas. 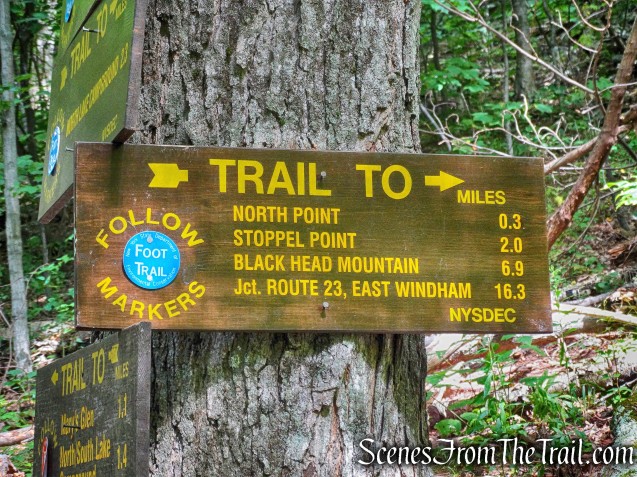 junction with the Escarpment Trail

The last 0.3 miles to North Point on the Escarpment Trail is steep and rocky.

Some rock scrambling is required to reach North Point.

It was worth the effort as we reached our first destination. North Point, an area of many open ledges located at 3,000 feet above sea level, offers outstanding views. Looking southeast, North Lake is on the left with South Lake on the right and the Hudson River is visible in the distance to the left. 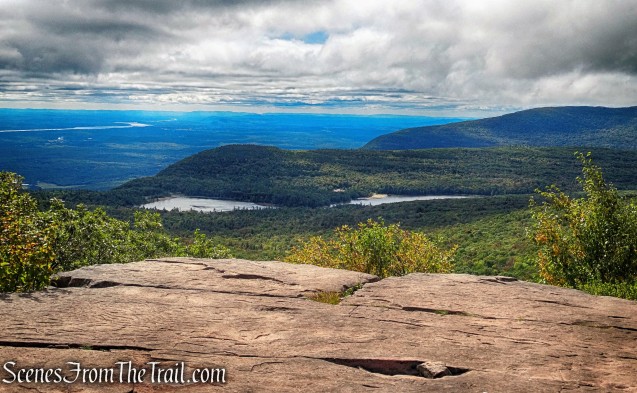 We rested up here for a short while, taking in the view. It is quite impressive and it’s a popular destination for hikers. We saw several groups stop while we were here. Most hikers come to this spot then turn around and head back. We weren’t quite done yet. We still had 1.7 miles to reach Stoppel Point.

The Escarpment Trail continues to climb, but much more gradually. The bulk of the elevation was done getting to North Point. The trail now continues towards the summit of North Mountain, with some minor rock scrambles along the way.

About 1/4 mile from North Point, we came to North Mountain Ledge which has a similar view as North Point, but no people. From this point on, we crossed paths with only a handful of hikers.

Below is a zoomed in view of North Lake with the Hudson River just beyond.

We continued on the Escarpment Trail which skirts the summit of North Mountain. We then entered a conifer forest with a carpet of pine needles, a welcome change from the rocky terrain. 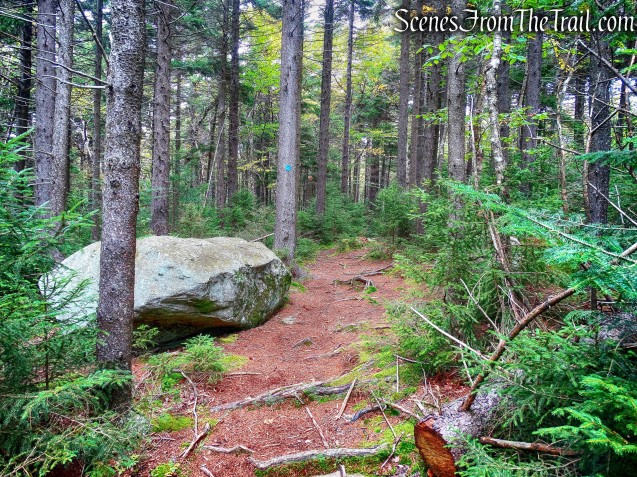 The trail climbs more steeply as we near Stoppel Point.

Climbing up and over some more rocks……. 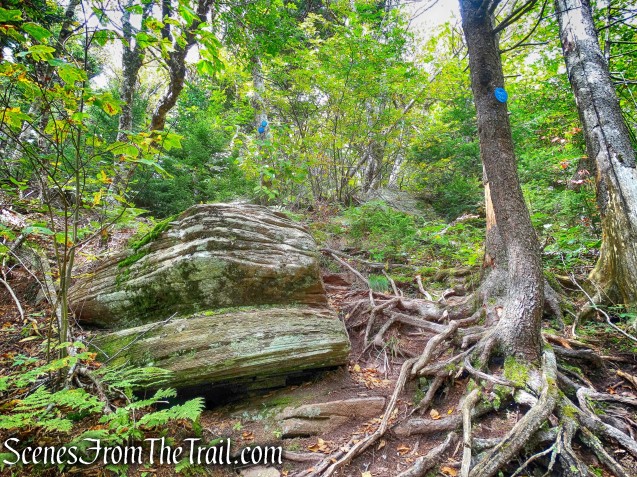 we arrived at Stoppel Point, an elevation of 3420 ft.

To the right of the trail, there is a small ledge with an east facing viewpoint. 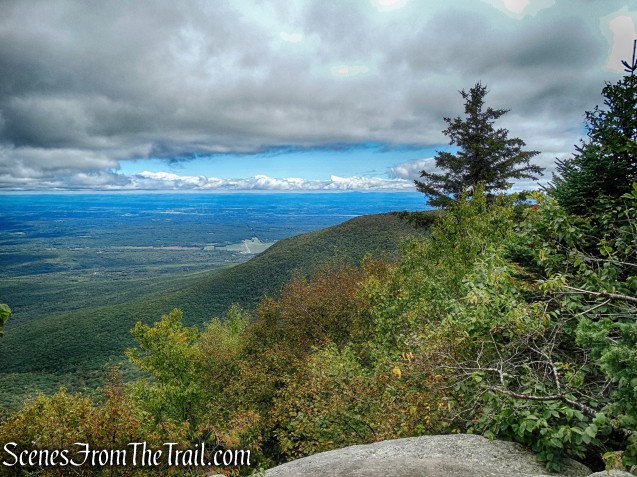 We stopped here and had lunch while enjoying the view.

Although we were officially at Stoppel Point, we still had about 1/4 mile to go to reach the plane crash site. Along the way, there is a short spur trail that leads to a northwest facing viewpoint of the Blackhead Mountain Range. From left to right: Thomas Cole (partially obscured by the foliage), Black Dome and Blackhead Mountain. 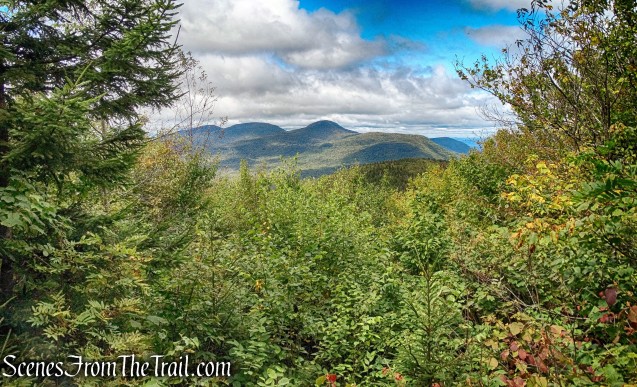 A short distance from the viewpoint we arrived at our turnaround point. The plane wreck is just a few feet from the trail and considering it has been sitting in the same spot since 1983, the fuselage is fairly intact. 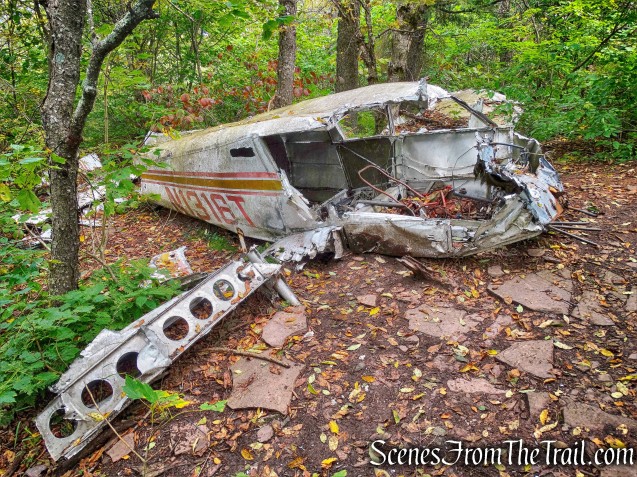 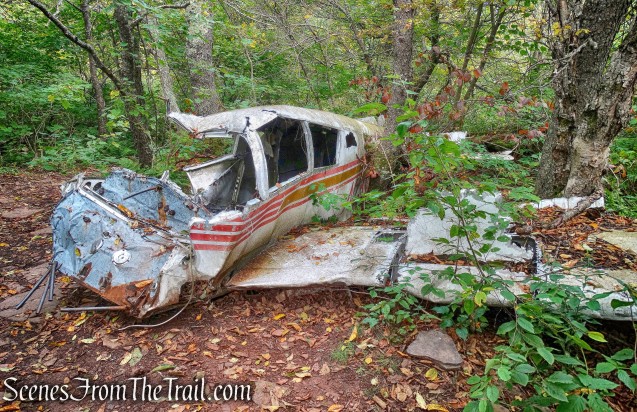 After checking out the plane, it was time to head back. Since this hike was an “out and back,” we would be retracing our steps and head back the way we came. It was a beautiful afternoon in the Catskills as we made our way back on the Escarpment Trail.

This turned out to be one of my favorite hikes and I was enjoying the scenery along the trail. 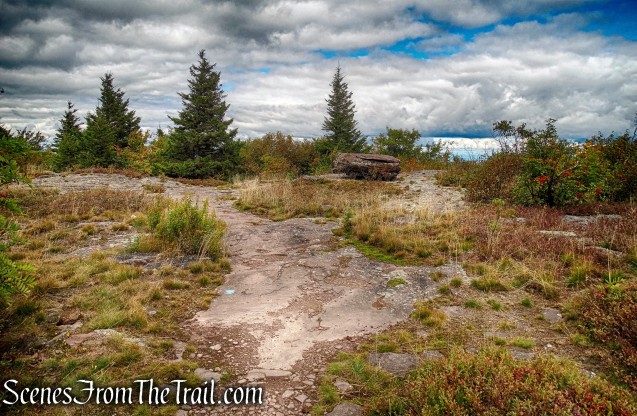 We made a stop at all the points of interest on our way back, including North Point.

Once we passed North Point, we saw lots of hikers making their way up there. It was already somewhat late in the day and it appeared that some were going to camp out. We turned right onto the red-blazed Mary’s Glen Trail and then another right on the yellow-blazed Rock Shelter Trail as we made our way back to the parking area. I began to wear down, but kept up a good pace. This was a great hike, but by the time we made it back to North Lake Road, I was glad to be back on pavement. I can now cross this hike off my list and add a few more Catskill hikes to that same list.

Please don’t forget to click the “follow” button on the right side of the screen and stay informed on some great hikes. Hope you enjoyed my journey, now get out there and take a hike!

Cons: I wish I was younger.