Buttermilk Hill, a high rocky ridge at the northeastern section of Rockefeller State Park Preserve, is said to get its name from the turbulent period of the American Revolutionary War, when local farmers hid their dairy cattle on the ridge to protect them from marauding soldiers. It also seems to be a lesser visited area of the preserve. It is tucked between the Saw Mill River Parkway and New York State Route 448, with Route 117 on its northern border and Old Saw Mill River Road in Eastview to the south. In an interview with the New York Times in 2002, David Rockefeller was asked:

Q. Of the thousands of acres your family has owned in Westchester, which places do you like the most?

A. Rockwood Hall, which belonged to my brother Laurance and was given to the state, is certainly a beautiful place. Buttermilk Hill would be another one of my favorite places. The carriage roads there, the earliest ones, were built by grandfather.

Previously we hiked to Raven Rock and Ferguson Lake which is on the same eastern side of Rockefeller’s so I decided to the rest of that section. We did not see many people along the trails there so we were hoping for the same on this day. Since we had a few inches of snow a couple of days before plus the snow that had still not melted from earlier in the month, I decided on Rockefeller’s for our hike. The relatively level terrain and wide carriage roads makes it a good spot for an easy hike when there is snow on the ground. It was in the low to mid 20’s with gusts up to 24 mph on this blustery Sunday morning in March. Still not fully recovered from Bronchitis, but on the mend, we headed out. We parked in the lot for the North County Trailway which is right on Route 117 in Pleasantville. The lot offers ample parking and on this day there were only a few cars in the lot when we arrived. We began at the connector trail at the southwest area of the parking area. 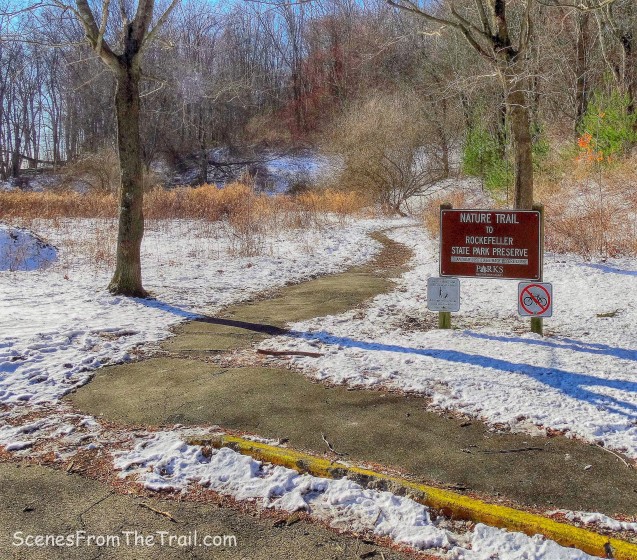 We walked on the footpath until we came to a t-intersection where we turned left onto Lucy’s Loop. We had our microspikes with us, but decided to wait to see how icy and slippery the trails were before we put them on. The footpath was a little slick, but surprisingly the carriage roads were mostly clear. 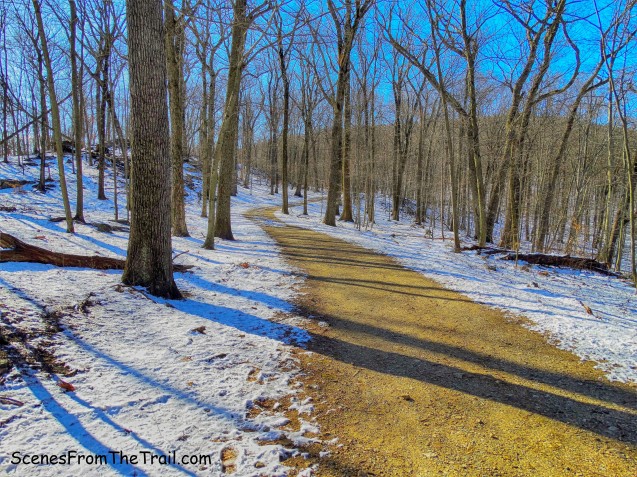 When we arrived at the next t-intersection, we veered left and continued on Lucy’s Loop. 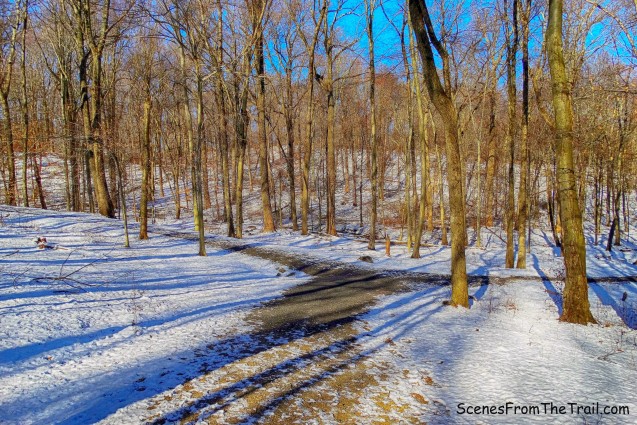 We walked uphill and at the top of the rise came to some fenced off fields that overlooked Route 448. By looking at the trail map it appears that this is also the end of the Lucy’s Loop trail.

We stopped here briefly for a rest and I happened to see a hawk in a tree some distance away. It was very windy and it was hard to keep my camera steady as I zoomed in for a shot. 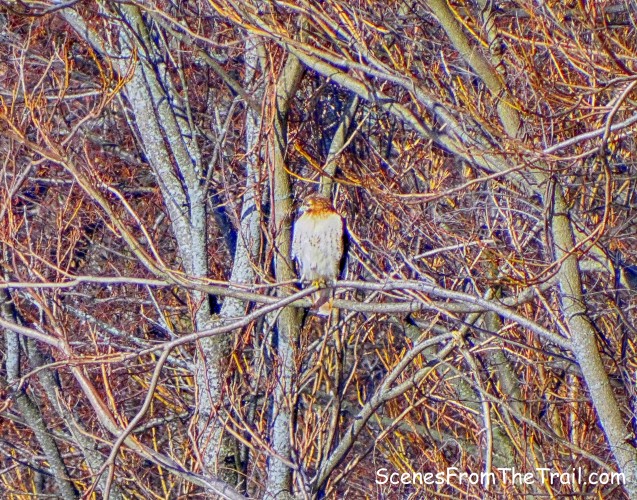 hawk in a tree

We then walked along the carriage road which paralleled Route 448. Upon arriving at a y-intersection, we veered left and began to ascend the Buttermilk Hill trail. 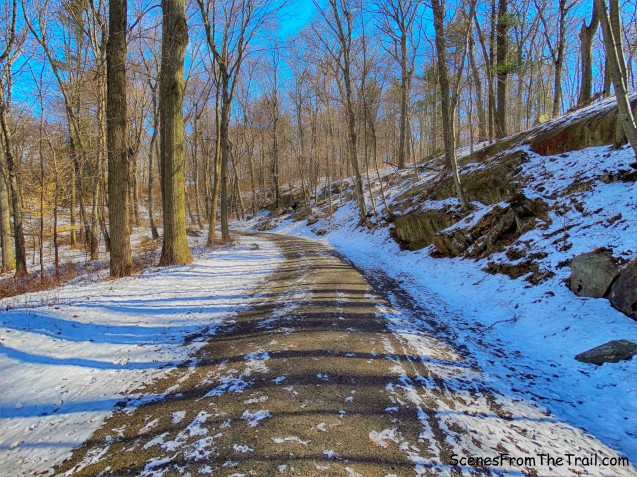 On the way up, a couple of runners passed us and they were the only people we saw in this section of our hike. The road levels off and then begins to descend. To the right of the road is the summit of Buttermilk Hill so we walked up what appeared to be a snow covered road and headed towards the top. At an elevation of about 716 feet, it is the highest point of the entire preserve. There are no views that I could find, but it was still a worthwhile visit to the summit. The Buttermilk Hill trail ends where the Laurance’s Ridge trail begins. We bushwacked along the summit with the Laurance’s Ridge trail just below to the left. We then walked down a small embankment and rejoined the trail. We then arrived at a y-intersection with the Goat Trail that veered to the left, we stayed to our right to continue on the Laurance’s Ridge trail then made another right at the Ferguson’s Loop trail a few feet ahead. We stayed straight and were now walking on what is listed on the map in several places as “RF” which are the Rockefeller Family trails. They are connector trails that run through or by private property and hikers are permitted to use them. Off to the right was a private home with a few barking dogs. They also had a teepee sitting close to the trail. 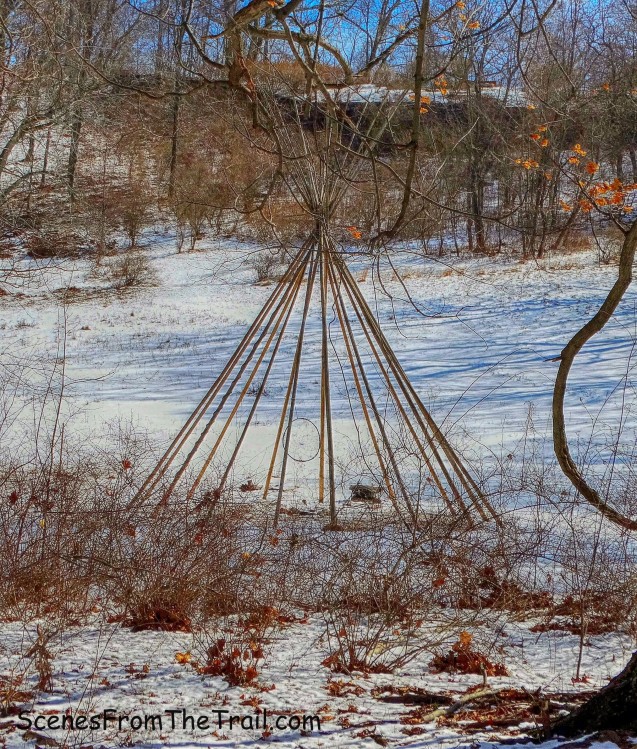 We walked past a gate and enjoyed a nice western view towards the Hudson River Palisades and beyond. 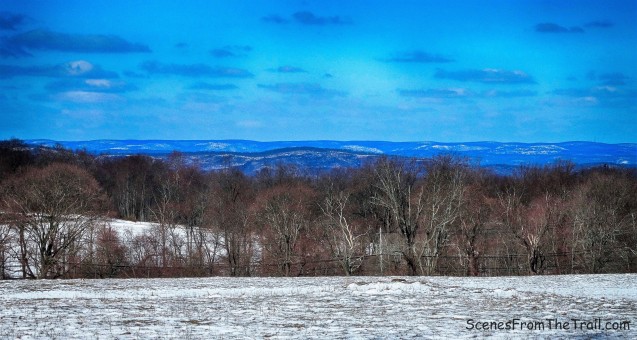 We then turned left where the Buttermilk Hill trail and Lucy’s Loop connect and now we began to retrace our steps, for the time being. 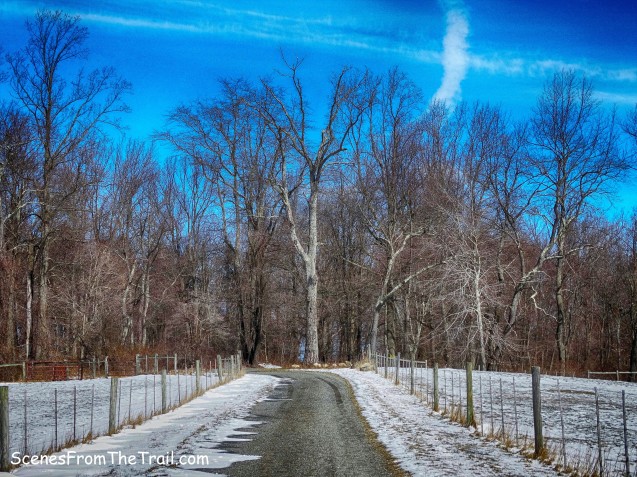 As we were retracing our steps, we came to a y-intersection where Lucy’s Loop veered left and right. We originally came from the right at the beginning of our hike so we veered left to avoid walking back the same way. As the name implies, it looped us around and brought us back to the parking area where our hike began. It was a pleasant hike in the woods, but now it was time for some chow. Back at the homestead we had a Trader Joe’s Carne Asada in the slow cooker and we enjoyed some shredded beef tacos. For dessert we had some Chocolate Flan and Mexican Cheesecake. All was delicious and we feasted to our hearts content. I hope that you enjoyed the hike and please don’t forget to follow my blog and stay up to date on all my journeys. Now get out there and take a hike!