Map: Kittatinny Trails or one available at the visitor center

High Point Monument is a memorial to NJ veterans that also marks the highest elevation in the state of NJ, at 1803 feet. Designed as a lasting tribute to “Glory and Honor and Eternal Memory of New Jersey’s Heroes by land, sea, and air in all wars of our country,” construction began in 1928. On June 21, 1930, a dedication ceremony was held at the monument’s base.

The view from High Point Monument, at 1,803 feet above sea level, is a spectacular panorama of rich farmland and forest, soft hills and lush valleys in three states. The blue line of the Delaware River divides the verdant ridges of New Jersey from those of Pennsylvania. High Point offers superb trails for hikers and skiers and quiet spots for campers and anglers. The view below shows the Delaware River separating Pennsylvania on the left and New York on the right. 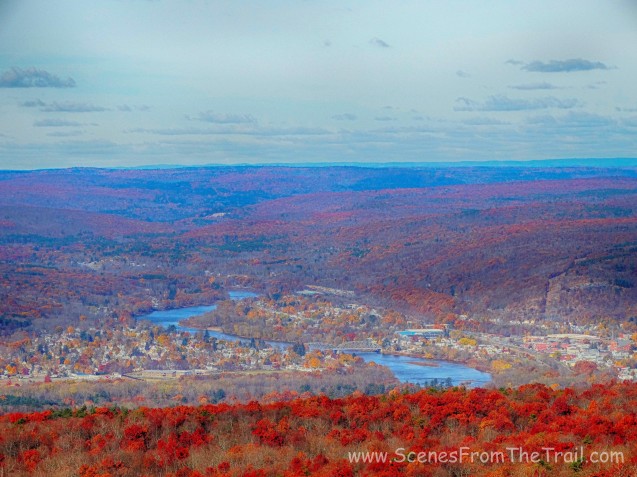 I was looking forward to a nice Autumn hike and this place fit the bill. I have been able to see High Point Monument from hikes I have done in NY, NJ, Pennsylvania and Connecticut. I figured it was about time to see it up close and personal. We followed a hike description on the NJ Hiking website. It offered 4 similar hikes to the monument of varying distances. This enabled us to decide the length of our hike depending how we felt once we got to the monument. We began our hike by parking in the Appalachian Trail Hiker Parking area. There is no charge for parking nor is there a time limit. Once geared up and ready, we began our hike by heading to the corner of the lot towards the kiosk. There weren’t any blazes visible until we were a few feet on the trail. We started following the blue blazes of the connector trail.

In a short distance, the blue blazed connector trail veered right and was joined by the red dot on white Iris Trail.

At about .3 miles from the start of the hike, we arrived at a junction and turned right onto the white blazed Appalachian Trail (heading North).

For the next mile or so we would be following the white blazes of the Appalachian Trail. Shortly after turning onto the AT, we arrived at the visitor center and picked up a map. The map available at the visitor center is produced by the NY/NJ Trail Conference and is very detailed. There are also restrooms available for use. Once ready to proceed, we crossed Route 23 and across a field to the edge of the woods and continued on the Appalachian Trail heading North.

The trail becomes rocky and rugged as it starts to climb gradually through the woods, eventually the monument will come into view.

We climbed the steep and rocky trail stopping occasionally to catch our breath. 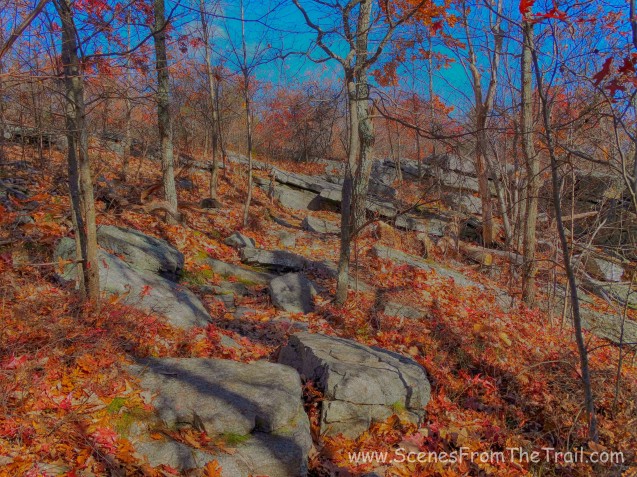 We came to a rock outcrop that had an open view to the east. I believe that the mountains in the distance are the Hudson Highlands, Harriman State Park and Bear Mountain. 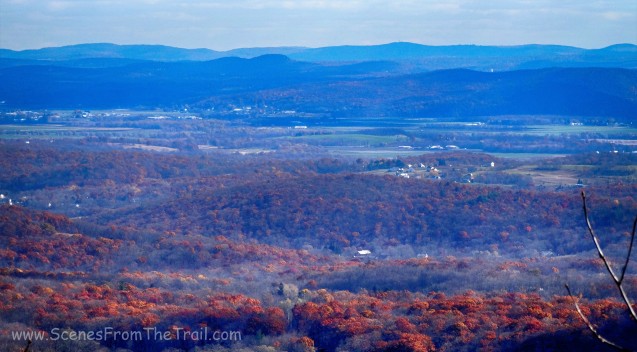 view East on the Appalachian Trail

From the outcrop, we had an obstructed view of the monument. We continued a little further on the AT and then the monument became more visible.

As we continued hiking on the AT, we came to an observation platform that provided some nice views of the entire area and the High Point Monument as well. 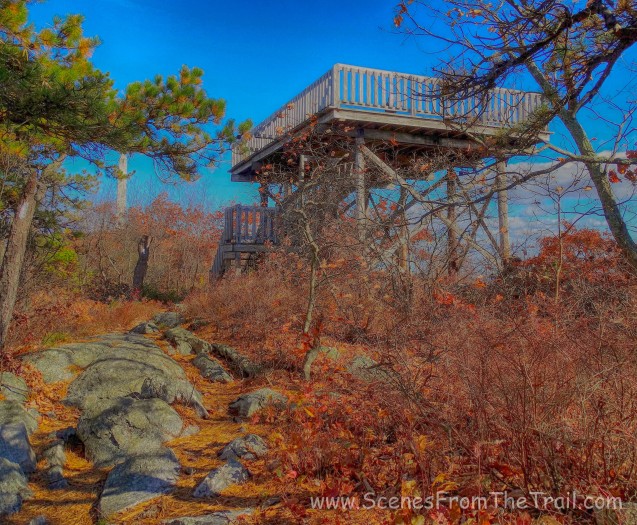 The view was impressive, but the wind was brutal. Needless to say we didn’t hang around too long.

As we continued on our quest to reach the monument, the AT made a right turn at a junction with the red-green blazed Monument Trail. Here is where we left the AT and now began a final steep ascent on the Monument Trail towards the highest point in the state of New Jersey. Also at this same junction is where the Shawangunk Ridge Trail (the three blue blazes signifies the beginning of the trail) begins and runs 71 miles northward along the dramatic Shawangunk Ridge to Mohonk Preserve.

After huffing and puffing up the final push, we arrived at the base of the High Point Monument. I made a bee line for a bench, dropped my backpack on the ground and took a seat. The view was spectacular from where I sat, but the wind was whipping around and combined with my sweat, chilled me to the bone. It was supposed to be warmer, in the high 50’s, but felt much colder. Nevertheless, I could see 3 states from here and it was worth the hike. At this juncture, we had hiked about 2 miles.

Lake Marcia and beyond to the Southwest.

Lake Marcia and beyond

The monument was closed so we couldn’t climb inside, but the 360 degree views from the base were sufficient. 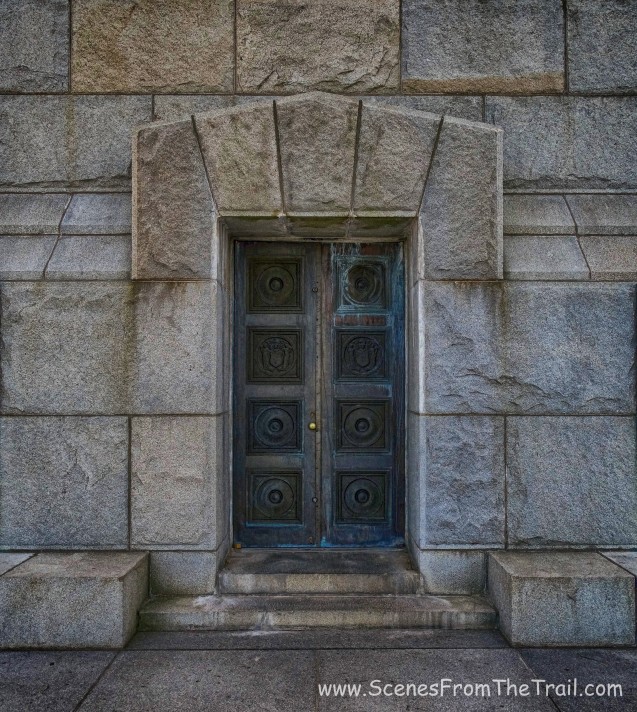 Our intention was to have lunch near the monument, but since you can almost drive up to it there were throngs of people all around. The wind (yes, there I go complaining about the wind again) was bothersome so we decided to find a less secluded (and less windy) spot to partake of our nourishment. At this point we also discussed whether we would turn around and head back, which would make this a 4 mile hike, or continue on and make this a longer hike. At my urging, we decided to extend the hike. We continued through the parking area where we caught up with the Monument Trail and headed back into the woods.

As soon as we were in the woods, we found some boulders just off the trail and relaxed and had some lunch. When we were done, we jumped back on the trail and continued on our hike. This section of the trail was pleasant, easy and mostly level with some short paths that led to views on either side. 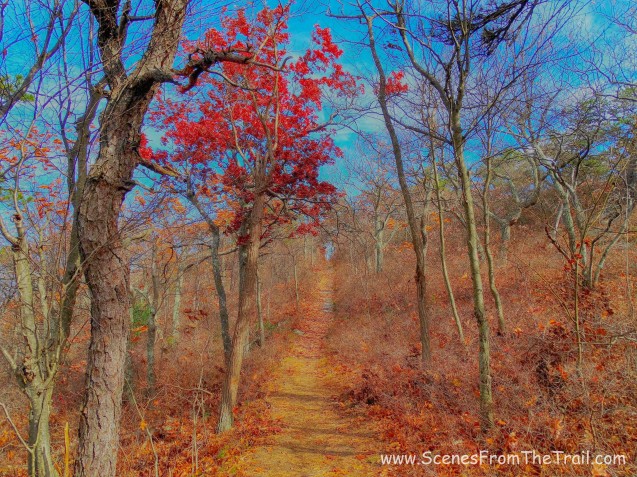 Going on the Cedar Swamp Trail was a loop in itself. When we came out from the mud bog, we were back at the junction with the red-green blazed Monument Trail. We turned left and proceeded uphill and along a ridge, with views on the right of Port Jervis, NY and PA. The trail is rocky with minor elevation changes and lined with scrub oak. 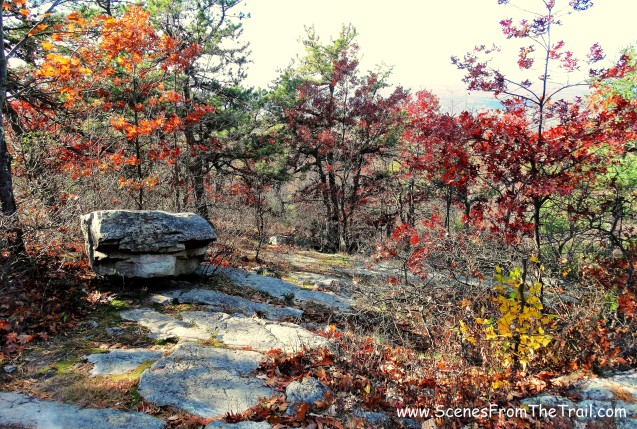 At the 6 mile mark, we arrived at a park road where the nature center is and walked down to Lake Marcia, where we took a break on a picnic table. At this point after a lengthy discussion, it was decided that I would hike the last 2 miles on my own and return with the vehicle. I walked the park road until I could see the observation platform through the trees and hoofed it up to the Appalachian Trail where I turned right (south) and retraced my steps back to the Appalachian Trail Hiker Parking. I then returned back to Lake Marcia (which is located in High Point State Park) with the vehicle where we lit a nice fire and grilled a giant London Broil. I was exhausted, but thoroughly enjoyed this hike and the meal. We packed up the vehicle as it was getting dark and headed out. That’s it for today folks. I hope that you enjoyed the hike and don’t forget to sign up to follow my blog so you don’t miss my latest entries. Don’t just sit there looking at the screen, get out there and take a hike!