I have always wanted to visit Sterling Forest, but never got around to it. Well, this past weekend I finally did. As with every hiking trip I tend to do as much research as possible to avoid any surprises along the route. With that being said, we loaded up the vehicle and off we went.

Sterling Forest State Park is comprised of about 21,935 acres and was originally owned by Sterling Iron Works, which mined and shipped iron ore from a number of sites within the park. The last of the mines were closed in the 1920s.

I love history as well as architecture so we decided to check out the mining ruins as well as some views.

There are 32 marked trails in Sterling Forest so having purchased a map I planned our route, which included the aforementioned ruins and also the Sterling Fire Tower. I prefer to do a loop hike whenever possible to avoid having to retrace my steps and seeing the same scenery on the way back.

We arrived at the Frank R. Lautenberg Visitor Center and parked in the lot which has ample room for many vehicles. We proceeded to the visitor center to gather information and find out the location of the trailhead. This place has maps for just about any loop hike you care to do as well as being very helpful and courteous. I was impressed.

Our loop was almost identical to the one listed in the NY/NJ Trail Conference site (Sterling Forest Fire Tower and Iron Mines) with the exception that we viewed the ruins first. The visitor center recommended to do this last as it would be downhill, but I wanted to take photographs and knew it would be more crowded later on. In total the hike was about 4.5 miles.

So we started out on the blue blazed Sterling Lake Loop Trail which was just outside of the visitor center. After a short walk we came upon the yellow blazed Lakeville Ironworks Trail

which is only about .5 miles and takes you back to the blue blazed Sterling Lake Loop Trail. The ruins are quite cool and have information about their history on outdoor interpretive signs.

From there we caught the orange blazed Bare Rock Trail which began a steady ascent uphill. I recommend bug repellent on warm days because from this point on the mosquitoes were annoying. The trail is aptly named as it has a lot of exposed rock along the trail. We came upon a junction with the blue on white blazed Sterling Ridge Trail and made a left. This trail is described as having “undulating terrain.” It was more of a pleasant walk in the woods than a ridge trail. The trails here are well marked and there are plenty of signs, so it would be pretty difficult to get lost. There weren’t too many views up until we reached a rock outcrop over Sterling Lake.

That was a nice view, but I wanted more. In a short time we made it to the fire tower which I did not hesitate to climb.

The views were spectacular.

After taking in some views and relaxing for awhile, it was time to move on. We proceeded to the red blazed Fire Tower Trail which took us on a gradual descent down the mountain. We turned left onto the red triangle blazes of the Fire Tower Connector Trail until we reached the blue blazes of the Sterling Lake Loop, which is just about where we began. 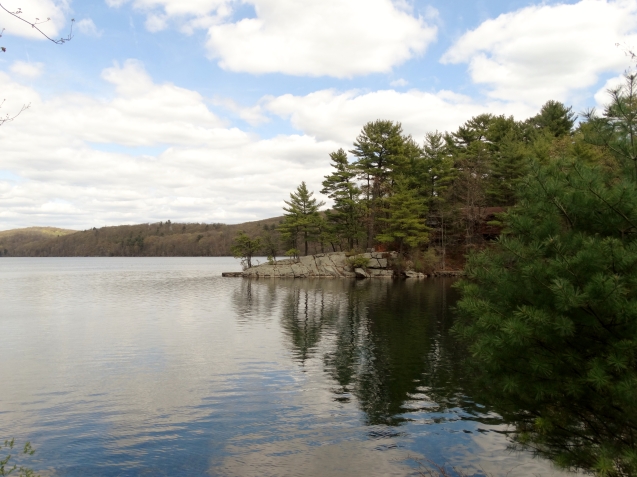 Once back to the vehicle we packed up and proceeded over to Seven Lakes Drive to grill some food and relax. All in all it was a good day. I would recommend this hike.