Fees and hours: Entrance and parking is free.  The preserve is open year-round, dawn to dusk.

Located on the Hudson River, in the heart of the majestic Hudson Highlands, West Point Foundry Preserve encompasses 90 acres of forested land and the abandoned site of a Civil War artillery foundry and ironworks on a tidal marsh in Cold Spring, New York. The Scenic Hudson Land Trust obtained the site in 1996 in order to prevent development. Now open to the public for recreational use as an interpretive park and preserve, the property has been transformed into an outdoor museum.

A detailed map at the Preserve’s trailhead kiosk guides visitors along the exhibit installations and along the major trails of the 90-acre Preserve. The map is adapted from an 1853 fire insurer’s map of the Foundry and Cold Spring Village. Throughout the preserve, content is illustrated with period photographs, stereoscopic images, and etchings from the Foundry’s own archives, now housed in the collection of the Putnam History Museum, located adjacent to the site.

Today nearly 2 miles of trails follow old rail beds and pass extensive foundry remains that led to the preserve’s inclusion on the National Register of Historic Places. Interpretive features, including a full-scale sculptural model of a 36-foot water wheel that tells the site’s intriguing story.

At the center of the preserve is the foundry’s 1865 Office Building. Today, it is the only building remaining on the Foundry grounds.

The preserve is free and there is plenty of parking in the large gravel lot.

Restrooms are available on site.

Established in 1818 in Cold Spring, New York by Gouverneur Kemble and others, the West Point Foundry became one of the major industrial sites in the United States manufacturing iron products. Its most notable period was during the Civil War, when it produced the Parrott cannon designed by Robert Parker Parrott. The foundry closed in 1911.

The foundry was busiest during the American Civil War due to military orders. At that time it had a workforce of 1,400 people and produced 2,000 cannons and three million shells. Parrott also invented an incendiary shell which was used in an 8-inch Parrott rifle cannon (the “Swamp Angel”) to bombard Charleston. The importance of the foundry for the war effort can be measured by the fact that President Abraham Lincoln visited and inspected it in June of 1862.

With the advent of steel, iron quickly fell out of favor, and The West Point Foundry floundered and died in the early 20th century. Fallen to ruins and reclaimed by nature, it sat mostly unappreciated, except by day-trippers who often hiked among the pretty surroundings.

A plant making batteries close to the former ironworks contaminated the area by dumping toxic waste into nearby Foundry Cove. The cove was declared a Superfund site by the U.S. Environmental Protection Agency in 1989, but the resulting cleanup succeeded in making what Scenic Hudson describes as a “remarkable ecological renewal.”

In 1996, Scenic Hudson, a Hudson Valley environmental-preservation group, purchased the property and in 2006, began a $3.6 million renovation. The effort included trying to preserve and stabilize the foundry ruins, wetland scientists, preservation architects, exhibit designers and engineers. Scenic Hudson also commissioned Michigan Technological University’s industrial archaeology program to conduct a seven-year study of the ruins to ascertain how the foundry operated.

In 2013, The West Point Foundry Preserve opened to the public. Many of the foundry’s ruins have been stabilized, interpretive signage was installed, and audiovisual tours are available. An easily accessible half-mile trail connects the preserve directly to the Metro-North train station at Cold Spring.

In 2010, The West Point Foundry Preserve was added to National Register of Historic Places. 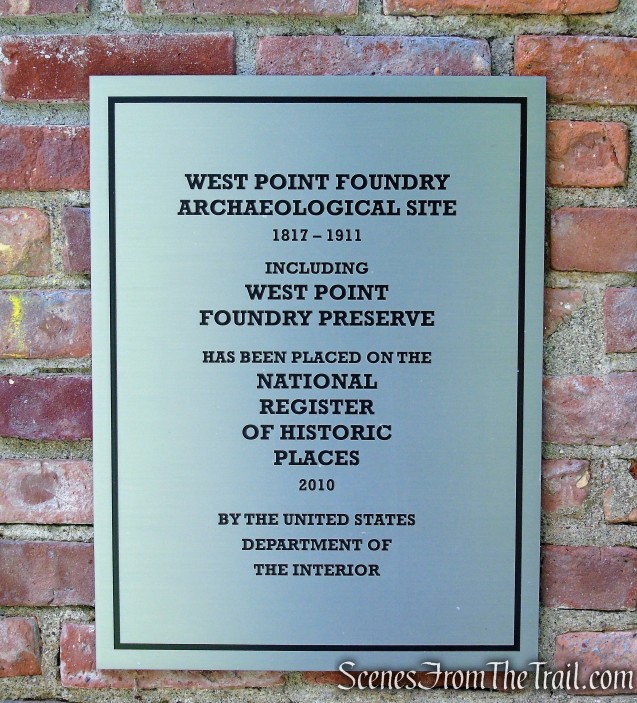 In 2019, it was designated a Historic Mechanical Engineering Landmark. 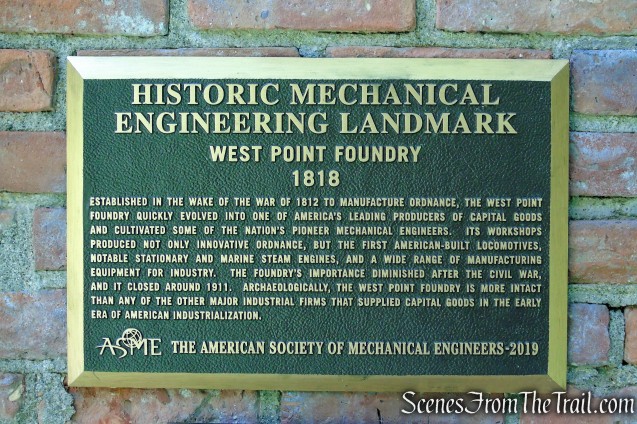 Trails follow old rail beds and pass the remains of foundry buildings and interpretive features that tell the story of the site’s contribution to the Industrial Revolution and the Civil War, as well as the land’s astonishing ecological renewal. The Blue Trail links the preserve to the Cold Spring Metro-North station and the Village of Cold Spring.

The trails are a combination of well groomed, wide walking paths and rougher footpaths that weave their way through the property. The three official trails are marked with Scenic Hudson round plastic discs of varying colors. 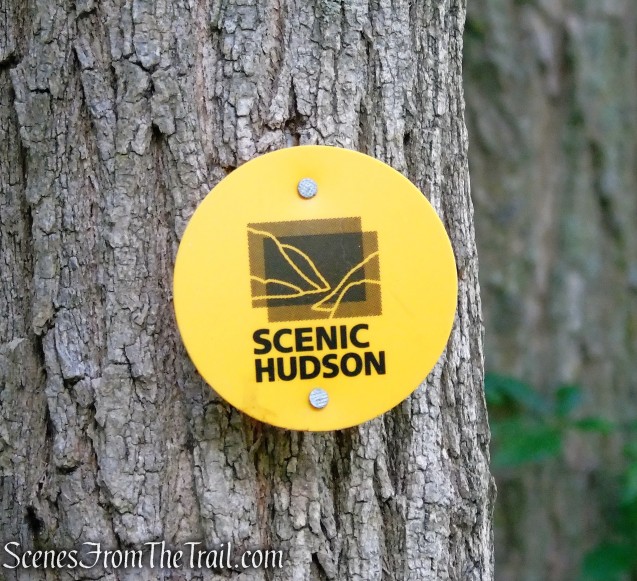 Yellow Foundry Trail~ This yellow-blazed trail is a loop that takes visitors to many of the preserve’s key sites. The trail is lightly graded. The trail begins at the southeast end of the parking lot, near the informational kiosk, makes its way past several points of interest and climbs stairs before making its way back to the parking area. 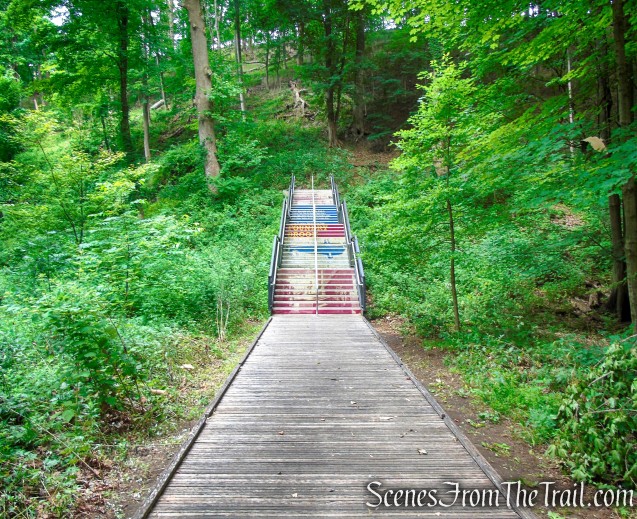 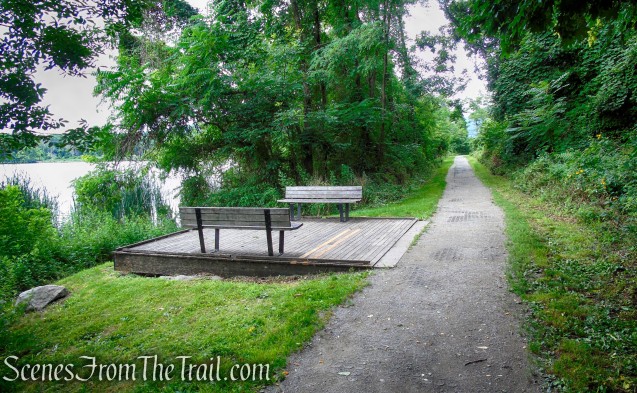 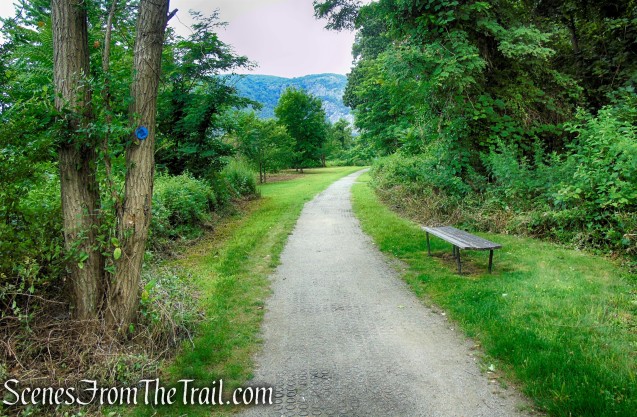 Listed below are some of the sights that you will find throughout the preserve.

One of several unique interpretive elements is the gun platform, a 32-foot-high wood structure that sits on a raised promontory overlooking the marsh. During the foundry’s heyday, each Parrott gun was tested from the hanging gantry of the original three-story-high gun platform for velocity, accuracy, and impact. An interpretive panel on the hoist describes the platform’s history and the marsh’s more recent Superfund cleanup, and a decorative roof structure with wood-cut-like illustrations of the site’s flora and fauna.

The gun testing platform was a critical operational area of the West Point Foundry during the Civil War, providing the means to prove the largest models of Parrott guns (100 to 300 pounder models) on site, prior to delivery to the Army or Navy. President Abraham Lincoln himself observed the testing platform in June 1862 following an official visit to nearby West Point. The Foundry tested ordnance pieces by firing multiple rounds from it, aiming at targets set up on the nearly vertical southeast face of Crow’s Nest, a mountain approximately 1.25 miles to the west-northwest, opposite Cold Spring on the west side of the Hudson River.

A 12-ft.-long stainless steel silhouette of the 300-pound Parrott gun is inscribed with a Civil War-era article from The New York Times describing the foundry and its armaments. 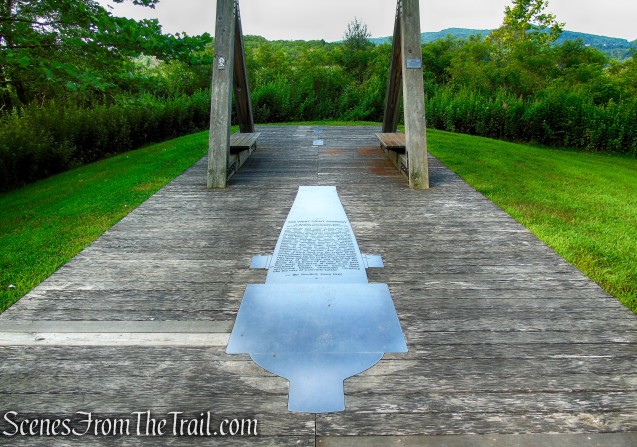 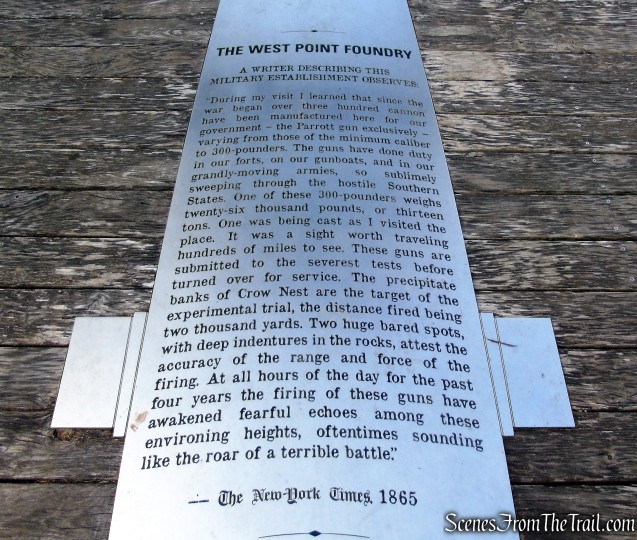 In 1865, Robert P. Parrott ordered a stately office building be built as a symbol of the West Point Foundry’s national prestige and success. Once constructed, the brick Italianate Office Building’s distinctive cupola was easily visible from various places in the landscape, including locations throughout the factory, the worker and management housing on Mount Rascal, and from West Point and ships passing on the Hudson River.

In 2015, Scenic Hudson reinstalled the 5,000-pound, 21-foot-tall cupola atop the historic Office Building. Southgate Steeplejacks of Barre, Vermont, restored the cupola, which was removed in 1998. Below: how the building looked in 2015 prior to the reinstallation of the cupola.

In the 19th century, Waterpower was power. Foundry Brook (originally named Margaret Brook), was channelized into an intricate network of flumes, raceways and storage ponds that powered operations and regulated water flow through the site. Water descended from Foundry Brook to Battery Pond, then by elevated flume into a giant water wheel that turned the foundry’s gears and cranes, feeding air to the hot furnace fires.

At its upper reach, below the Main Dam, Foundry Brook cascades over falls of boulders and cleaved bedrock, descending through a series of pools as it follows the toe of the adjoining slope to the east. In the late summer, the flow of Foundry Brook typically reduces to little more than a rivulet, whereas in the spring, the stream can overflow its banks with water from snow melt. 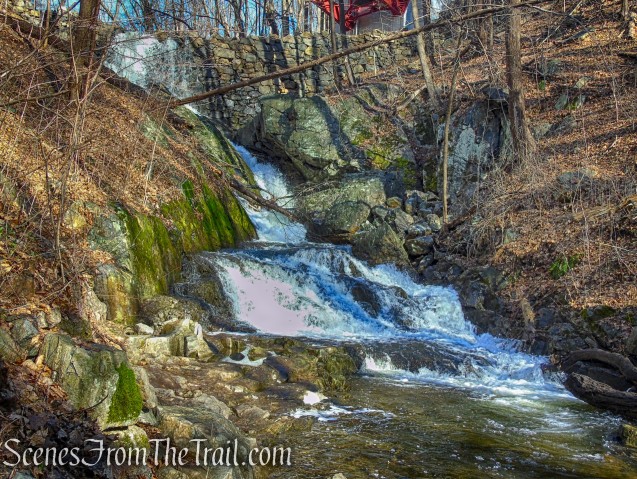 The boring mill’s operations were driven by the powerful, 36-foot diameter water wheel housed adjacent to the main structure. The replica you see today depicts a section of the wheel at its original scale, located exactly where it stood during the foundry’s heyday. Here the 36-foot-diameter water wheel powered machinery for drilling out the guns’ interior. Parrott guns featured a rifled bore, spiraling grooves that caused projectiles to spin when fired, enhancing their accuracy.

A hive of activity, the boring mill was filled with geared cranes, whirring lathes and other heavy machinery driven by a massive water wheel and leather belting system. The water that powered them came from an intricate series of headraces fed by Foundry Brook. Cannons, steam boilers, church bells and industrial hardware for cotton and sugar plantations in the U.S. and Caribbean were produced here in great numbers – setting the stage for America’s emergence as a major industrial power.

The Tuyere Arch is all that remains of the blast furnace. To achieve temperatures upwards of 2200°F, a blast furnace required a steady volume of air blown in through the tuyeres at the base of the furnace stack. The blast maintained a high combustion rate of fuel near the tuyeres, creating the greatest heat within the furnace.

Skilled laborers in the foundry’s pattern shop crafted exacting wooden replicas (or patterns) of the Parrott guns, which ranged in size from 10 to 300 pounds, according to the weight of projectile they shot. Patterns helped form molds that were then filled with molten iron.

There are numerous foundation ruins and partial brick and stone walls throughout the site.

The staircase bridges two elevations, the exhibits lining the forest and Foundry Road, a well-worn path along the ravine that workers traveled on their way home from the foundry. Text and historical images mounted onto cast-aluminum panels were attached to the stair risers so that, as pedestrians ascend the stairs, they can learn how water was pumped from Foundry Brook to drive the Boring Mill waterwheel and other factory machinery. 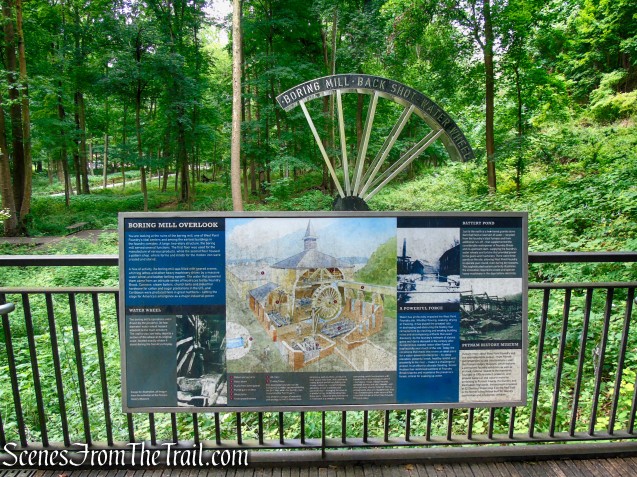 A steel staircase ascends the bluff from the blue-blazed Marsh Trail. Five oversized landings on the staircase accommodate benches for resting and taking in the views. Small interpretive panels on the landings will explain the history of the Kemble property and its connections to the West Point Foundry. 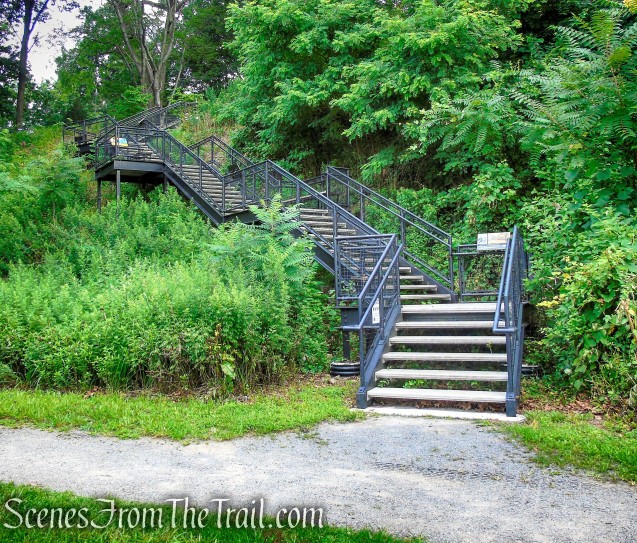 There are views from the staircase of Foundry Cove and the Hudson Highlands.

A stone dust path at the top of the staircase leads to a 15-by-32-foot wooden deck. The stairs, path and deck were added in 2017.

The overlook offers views of Foundry Cove, Constitution Island, West Point and parts of the Hudson Highlands. The view is much better during leaf-off season. 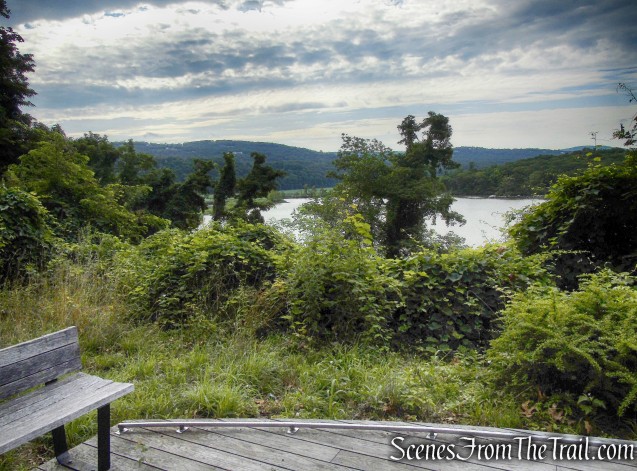 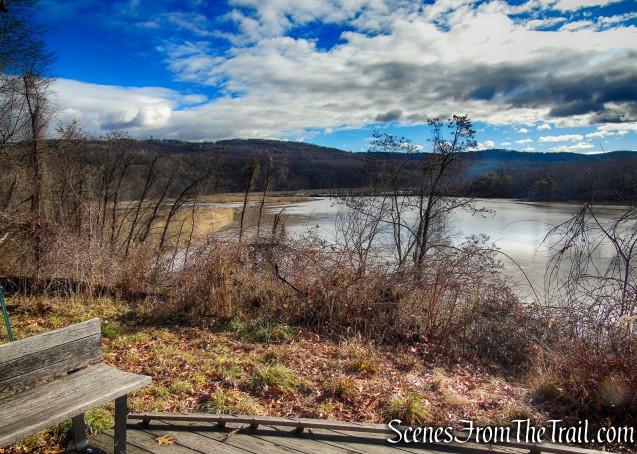 A well kept preserve that is steeped in Hudson River Valley history. There is plenty to see and learn here. A great place to visit for a leisurely walk near the Hudson River and a history lesson to boot.