Harriman State Park, located in Rockland and Orange counties, is the second-largest park in the NYS parks system, with 31 lakes and reservoirs, 200 miles of hiking trails, two beaches, two public camping areas, a network of group camps, miles of streams and scenic roads, and scores of wildlife species, vistas and vantage points.

Living in relatively close proximity to Harriman, it is my go to place for either a well planned or spur-of-the-moment hike. On this day, I had scheduled a different hike that involved some bushwacking through an area filled with Rattlesnakes. Not being in the mood to worry about being bit, I decided to reschedule that hike for cooler weather. A few days earlier, I had read that the Jackie Jones Fire Tower had been recently restored. I visited the tower in December 2016 and it was in really bad shape and not safe to climb. I was eager to see the restored tower and check out the view from the top. We were already in the car when we decided on this hike and since it was last minute, we kept it simple.

We parked in the hikers parking area on Kanawauke Road (CR 106). It’s a sizable pull off parking and there was only one other car when we arrived at 8:30am. On our return at approximately noon, it was at capacity.

From the parking area, we walked west along Kanawauke Road (CR 106) for about 300 feet, crossing over Minisceongo Creek.

The trail crosses the road, but after crossing over Minisceongo Creek, we turned left and proceeded past the gated road to commence the hike, following the yellow-blazes of the Suffern-Bear Mountain (S-BM) Trail.

We would be following the yellow blazes for the first 2 miles of the hike. The trail starts off on a paved park road as it proceeds uphill. 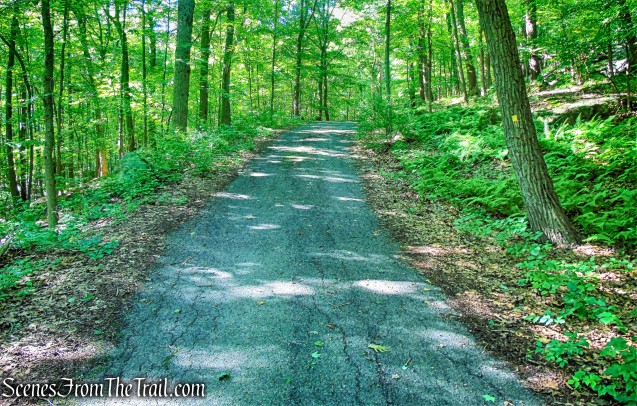 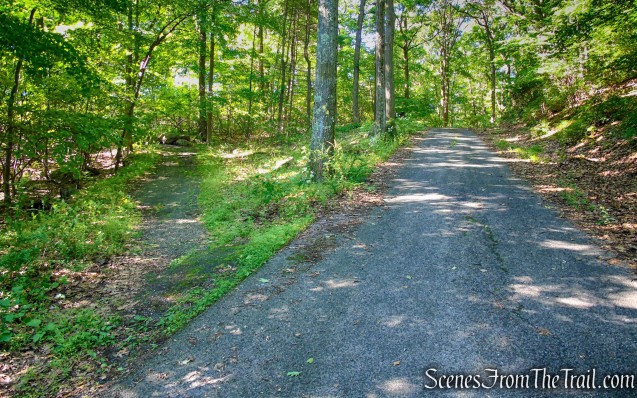 and passes some boulders across the trail.

In a short distance, the S-BM Trail passes a stone gatehouse.

The gatehouse is part of a large estate, known as ORAK.

A little further up the trail, to the left, are more extensive ruins. At this time of year, they are covered with foliage and harder to see.

Known as ORAK, the mansion was built in 1923 by George Briggs Buchanan, a vice president of the Corn Products Refining Company, which manufactured Karo syrup (Orak is Karo spelled backwards). After Buchanan died in 1939, his heirs sold the mansion to the park. The home, gardens and outbuildings were rented to Park employees until 1973, when the main house and hothouse were demolished. 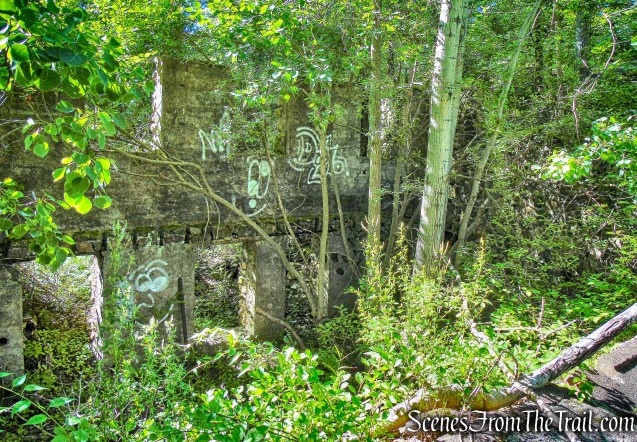 The dining room of the house resembled a ship’s cabin, with portholes for windows, and a floor that rocked gently to simulate a ship’s motion.

There’s plenty to explore here, including the remains of a greenhouse, but it is best done during winter when it is more exposed. Once we were done exploring the ruins, we continued heading uphill on the Suffern-Bear Mountain (S-BM) Trail.

Soon, we reached a fork in the trail. The unmarked woods road that comes in from the left would be our return route, but for now, we veered right to continue on the S-BM Trail.

The trail soon bears left, leaving the woods road, and climbs to a large open rock ledge. A short distance beyond, it passes communications towers on the right and soon arrives at the 1,276-foot summit of Jackie Jones Mountain, marked by a steel fire tower.

The last steel fire tower in the Bear Mountain-Harriman State Park, Jackie Jones Lookout was constructed in 1928 by the Palisades Interstate Park Commission, who operated the facility until 1931. From that time, the facility was operated by Forest Fire Control until it closed in the 1970’s. The 60’ Aermotor LS-40 tower with 7’x7’ metal cab, features windows of an unusual design. 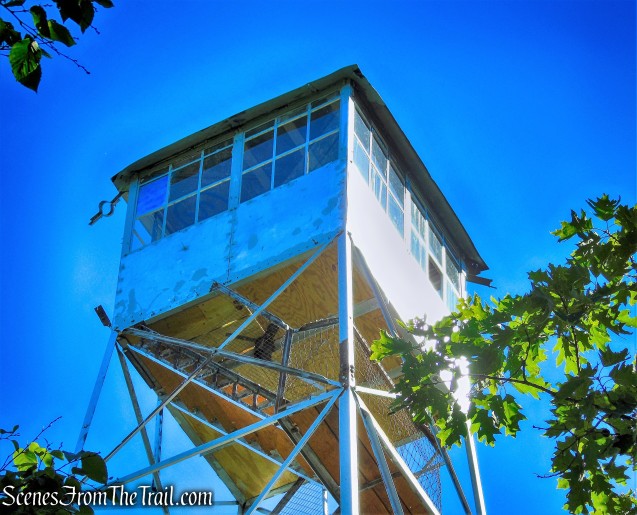 The fire tower was restored in 2018 by the New York State Chapter of the Forest Fire Lookout Association (FFLA). A great job and big thanks to them. I climbed the tower and hardly a shake. Although the cab was locked on our visit, the view from just below the cab was very nice. Looking northwest, one can see Lake Welch from the tower.

Looking southeast, the Hudson River is visible, with High Tor Mountain to the right. 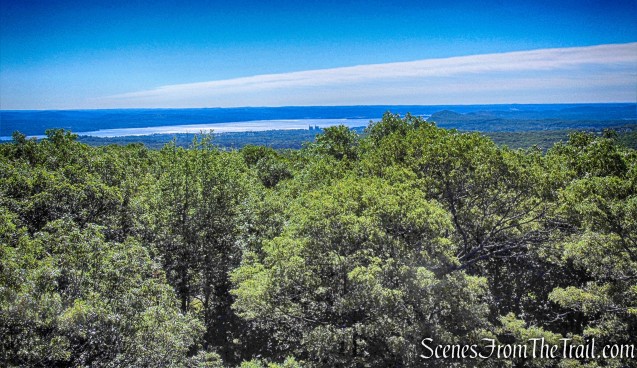 Looking south, the Manhattan skyline is visible in the distance.

Looking northeast, Bear Mountain is visible, just to the right of center, with the Harriman hills to the left.

After stopping briefly at the tower we resumed our trek. The S-BM Trail now descends, steeply in places. After crossing a stream, it climbs a little and then resumes its steep descent. At the base of the descent, it crosses another stream and then the Old Turnpike, a wide woods road, which is now the route of a buried telephone cable. After ascending slightly, it reaches a junction with the aqua-blazed Long Path, which comes in from the left. We continued ahead on the joint S-BM/Long Path, which turns right onto a woods road. A short distance ahead, the joint trails turn left and climb to the Big Hill Shelter.

Built in October 1927, this stone shelter offers a panoramic view to the south, with the New York City skyline visible in the distance on a clear day.

The shelter has 2 fireplaces and a wooden platform for sleeping. It also has a fire ring just outside the entrance.

We took a break here, had a snack and chatted briefly with several hikers that passed by while we were there. We also watched a pair of hawks soaring above us and making quite a racket. Once our break was over, we went back and descended on the S-BM/Long Path, following the same route we took up to the shelter. When we reach the fork where the two trails diverge, we stayed left and continued on the S-BM Trail. We retraced our steps on the S-BM Trail until we came to the Old Turnpike. Here we turned right and began walking on the unmarked road. The Old Turnpike was rather overgrown until 1969, when AT&T widened it to 20 feet and buried a coaxial cable along one side.

The Old Turnpike was a road from Monroe (now known as Southfields) to Haverstraw. It is not known when it was first built, but it became the “old” turnpike in 1824, when a new turnpike (now Gate Hill Road/Route 106) was built. 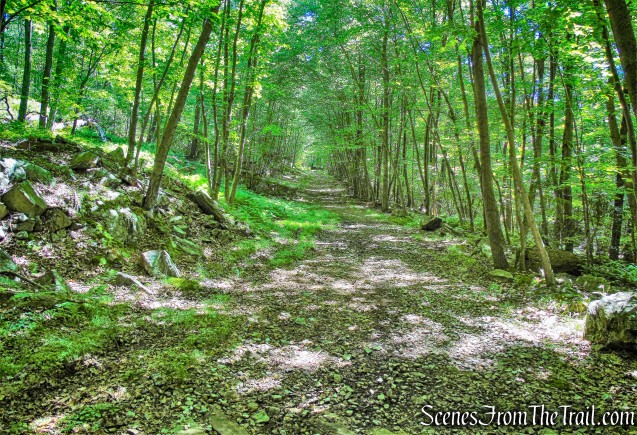 It was a very pleasant walk along this wide woods road. After about 0.5 mile on the Old Turnpike, we turned left onto another unmarked woods road. The turn was not easily discernible due to a large fallen tree across the road. I had to walk up to the tree in order to determine that this was indeed the road we were looking for. The image below was captured after stepping over the tree and looking back towards the Old Turnpike.

In about 0.3 mile, we reached a junction with the yellow-blazed S-BM Trail. The yellow blazes head both right and straight ahead, but we turned right, now retracing our steps along the S-BM Trail. We followed the trail downhill past the ORAK ruins and back to Kanawauke Road/Route 106. We then turned right on Route 106 and walked 300 feet along the shoulder to reach the parking area where the hike began.

This was a very nice hike for a hot and humid day. Not much elevation gain and mostly shaded throughout. Since I was familiar with the area, it made for a good impromptu hike.