Ogden Mills and Ruth Livingston Mills Memorial State Park adjoins Margaret Lewis Norrie State Park and together, comprise more than one thousand acres. The numerous trails that thread through the grounds of both Mills and Norrie State Parks are ideal for walking, jogging, hiking, cycling, cross country skiing, and snow shoeing, treating visitors to fabulous views of the Hudson River which runs directly along the parks’ western boundaries.

I was here a few years ago in winter and took a tour of the mansion, but did not hike the trails. I decided to check it out in warmer climate to take advantage of the river views and was not disappointed. The grounds are well kept as are the trails. I was griping about the long drive on the way up as it is an approximately 1-1/2 hour drive from Westchester County, where I reside. As soon as we were walking along the edge of the Hudson River on a gorgeous August morning, I came to the conclusion that it was well worth the drive.

We arrived at shortly before 10 am on a Sunday morning and there were several cars in the upper lot by the mansion, where we parked. We did this hike counter clockwise, starting at the top of the map.

Looking down towards the Hudson River is the expansive back lawn of the Mills estate. 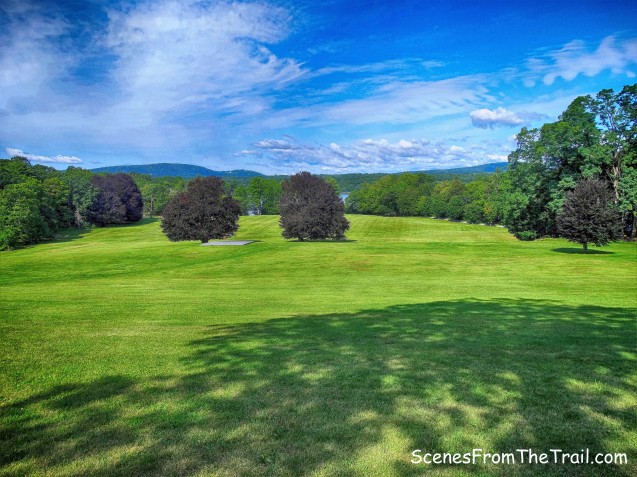 We walked north down the hill towards the lower lot and picked up the start of the blue-blazed trail as indicated by the three blue blazes on the tree, to the right of the gate.

beginning of the blue-blazed trail

The trail runs along a wide paved road that leads towards the Hudson River.

We left the road and walked on the grass to the edge of the river to take in the sights.

barge on the Hudson River

We then walked along the edge of the river to the Powerhouse, which looks like some kind of a boathouse to me.

From the Powerhouse, there is a nice view of the Catskill Mountains in the distance.

view north from the Powerhouse

We then made our way around the western side of the Powerhouse and climbed some stone steps that lead back to the paved road (Blue Trail) and began walking south.

The Blue Trail then turns right and leaves the paved road and begins heading west on a gravel road.

For approximately the next 1.5 miles, we followed the River Trail as it skirted the eastern shore of the Hudson River. 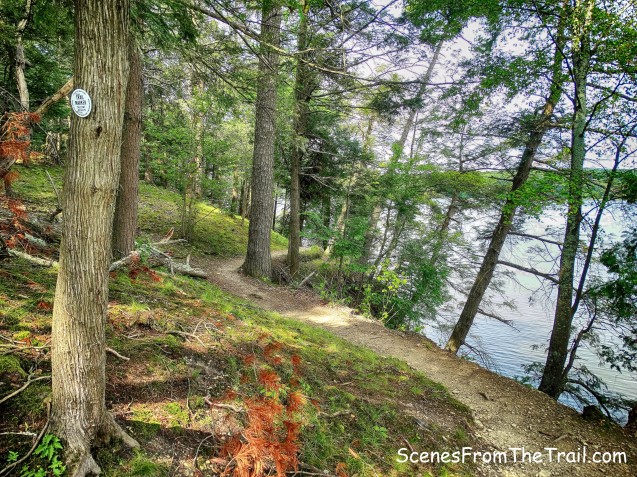 The River Trail passes several small beach like areas that are perfect to just sit on a piece of driftwood and enjoy the view. Growing up in a Hudson River town, I have always loved being near the river. This is one of the only places on the eastern shore of the Hudson that remains in its natural state where the railroad tracks are not by the water. We continued along, stopping frequently, basking in the August sun.

beach along the River Trail

We passed an old pump house that was used to pump water from the river for irrigation purposes. 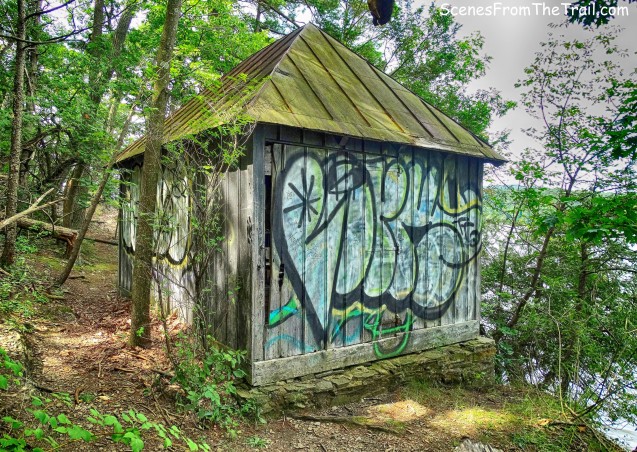 Many sights and views of the river and surrounding landscape can be seen along this trail. The Mount Academy in Esopus, NY sits nestled in the trees just across the way.

The River Trail travels through a grassy picnic area then a gravel road with a large picnic shelter on the left with a large fireplace. 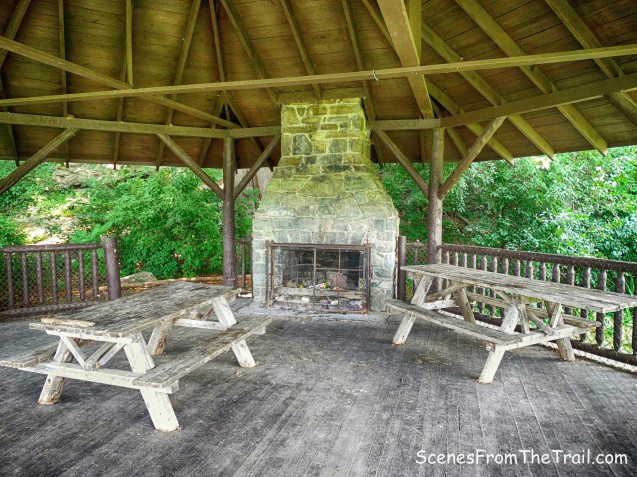 The trail then enters the woods again and continues to run along the shore. It then comes to a fork where the River Trail veers left. We continued on the unmarked trail because we wanted to stay close to the water, but this trail was badly eroded in some spots with a steep drop off. Concerned that the trail would either dead end or become impassable, we turned back and rejoined the River Trail.

The trail climbs a little and passes through Mills Norrie State Park campground, where there are 46 tent sites and 10 cabins available for rental at the park.

The trail continues through the campgrounds on a woods road then turns right and enters the woods. Nearing the river, we came to a spot where the Indian Kill flows into the Hudson River, with a stone bridge across the water.

The trail then crosses over the Indian Kill on a wooden footbridge and then comes out on a paved park road. here the white-blazed River Trail goes right, but we turned left on the yellow-blazed trail which was our turn around point.

The Yellow Trail was uneventful except for the small railroad bridge that spans it.

Directly opposite from the bridge is a junction with the Blue Trail and here we turned left. Now following the blue blazes, the forested trail was a contrast to the River Trail along the shores of the Hudson River. 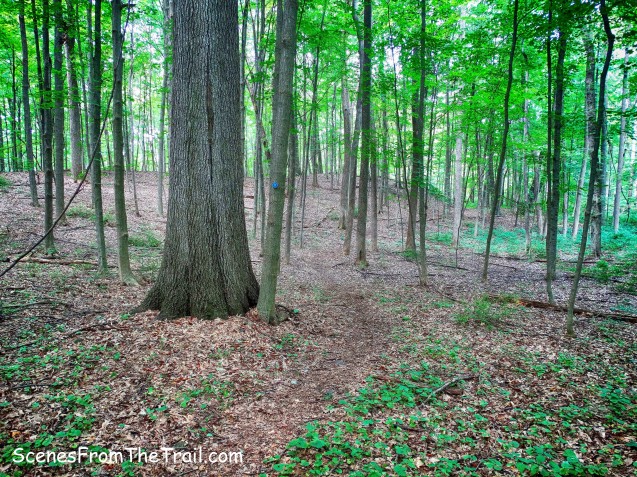 We followed the blue blazes past several road crossings and it then comes to a woods road where it turns right. We turned left on the woods road which has some faded blazes on the trees. The map shows it as a road with no markings.

In a short distance we came to a fork where the faded blaze trail veers right and also marked the beginning of the Green Trail. We stayed left and began following the green blazes.

The Green Trail heads west and from the looks of it must have been an important road at one time. The fact that they blasted through the rock instead of just bypassing it shows that they took great care in mapping out its route.

When we came to a junction with the Blue Trail, we turned right. The Blue Trail follows a gravel road.

Along the way, we came to Hoyt House, also known as “The Point.” Calvert Vaux designed the house in 1855 for Lydig Monson Hoyt, a wealthy New York merchant, and his wife, Geraldine Livingston Hoyt. Hoyt descendents owned and occupied the house up until 1963.

On a small hill near Hoyt House, there is a stone building without any windows.

Continuing on the Blue Trail, we came to the Hoyt House Barn Complex. 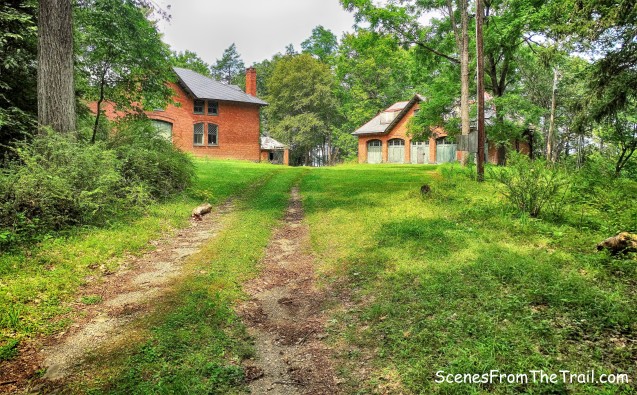 and a small garage.

A little further up the road, there is another barn.

The door was open so we took a peek inside.

We headed back out on the Blue Trail heading north and came to the junction with the white-blazed River Trail, where we first embarked on the River Trail earlier in the hike. Staying on the Blue Trail we followed the trail to the lawn of the mansion and sat at a picnic table to relax for a bit. Earlier in the hike I strained a calf muscle so I figured it was a good time to rest. We then walked up the lawn towards Mills Mansion where we were parked.

This was more of a walk than an actual hike. I never had the feeling that I was deep in the woods or that far from civilization. Nevertheless, it was quite enjoyable to say the least. It had a little bit of everything. The River Trail was my favorite part of the hike, but the rest of the sights along the trails made this hike worth the drive. I hope that you enjoyed my walk at Mills State Park and please don’t forget to follow my blog. Now get out there and take a hike!