Clarence Fahnestock Memorial State Park is a 14,337-acre state park located in Putnam and Dutchess counties, New York. Most of the park is situated in northern Putnam County between the Taconic State Parkway and U.S. Route 9. It is in an historic iron-mining region, and several remnants of that industry remain in mine excavations, stone foundations and the old railbeds used by some of the trails.

The Catfish Loop marked with red blazes, is a 4.9 miles long trail which loops around the southwest corner of Fahnestock State Park.  It passes through a wide variety of terrain and is a good introductory hike if you’ve never explored the park before. It is also a good rigorous ramble for the novice hiker, needing only to follow the same color blaze for the entirety of the hike. The trail passes through a less traveled section of Fahnestock which provides some tranquility for those looking to escape the crowds on some of the more popular trails in the area. 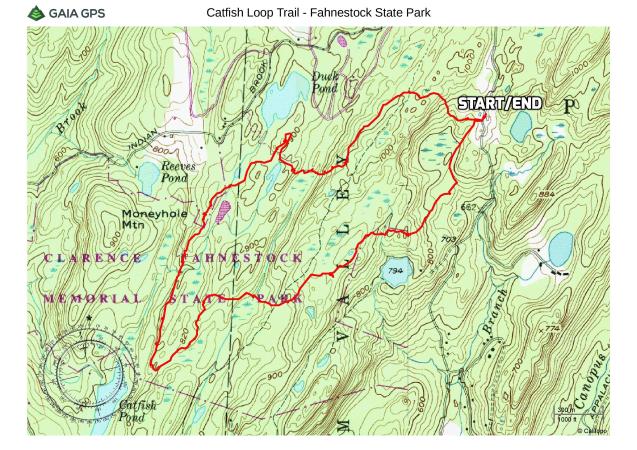 The weather for this Saturday morning was supposed to be cloudy, but a light rain fell throughout most of the hike. The temperature was in the low 50’s with 6 mph winds. When we arrived at the parking area at about 9:30 am there were quite a few cars there already. A group of Boy Scouts appeared to be gearing up for some camping and a group from the Adirondack Mountain Club (ADK) was about to hit the trails. I asked the leader of the ADK which trails they were hiking and was informed that they would be embarking on the blue-blazed trail and returning on the AT. I was glad to hear that as I did not want a large group on our heels as we hiked.

In a short distance we arrived at a junction with the red-blazed Catfish Loop Trail. The trail goes left and right, but we turned left and followed the trail clockwise. While hiking the first part of the trail I mentioned that is was so well blazed to the point of there being too many blazes close together. Jokingly I said that by the end of the hike, the trail won’t have any red-blazes because the overzealous trail keeper ran out of red discs.

The trail passes through a stone wall, of which there are many on this hike. An indication that this area was once used for farming. 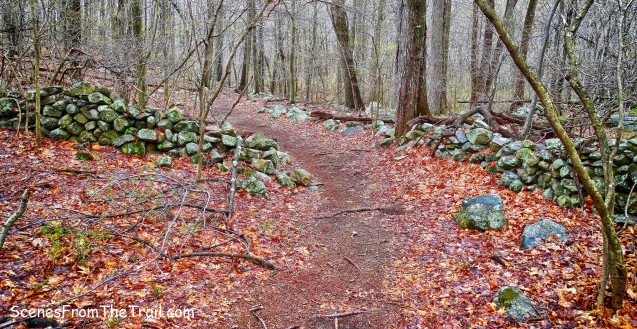 Immediately I noticed that this trail was quite picturesque as we walked through the woods. Never having been here before I was satisfied thus far at picking this hike.

In about a quarter mile, the trail turns right and crosses a stream, the first of many on this trail.

After crossing a second stream, the trail now begins to climb. 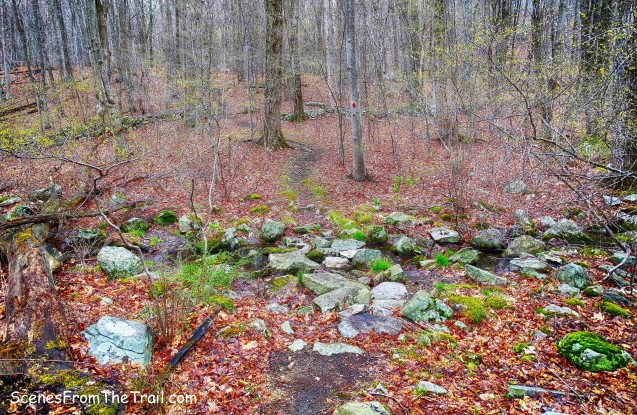 After climbing, the trail levels off then descends to cross another stream.

trail descends to cross another stream

After crossing this stream the trail markers are difficult to see, but looking straight up the hill, they become visible once again. For a minute I thought my comment of running out of red discs was coming to fruition. After climbing to the highest point on this section of the ridge, it continues on to a fairly level tract.

The red-blazed Catfish Loop Trail crosses the white-blazed Appalachian Trail. There is a cairn marking the intersection.

Catfish Loop Trail crosses the AT

Continuing on the red-blazed trail it soon begins a steady descent crossing a woods road marked with yellow blazes, indicating a horse trail.

Crossing yet another stream on rocks, the most enjoyable aspect of the hike, the trail climbs again and passes between some large boulders.

From the top of the boulders, there is a west-facing view, with Crows Nest and Storm King Mountains visible on the west side of the Hudson River. It was still raining and the visibility wasn’t ideal, but it’s the only real view on this hike. I had envisioned sitting on this boulder and having a snack while enjoying the view, but the song “Fool in the Rain” by Led Zeppelin was playing in my head, so “I’ll run in the rain till I’m breathless.”

only real view on this hike

We were now 2 miles into the hike and hadn’t really taken a break. Since it was raining, I would rather keep moving than stand still and get wet, there goes that song again! We passed through probably the most scenic section of the trail while a light rain fell steadily enough to get us drenched and keep my camera tucked away. 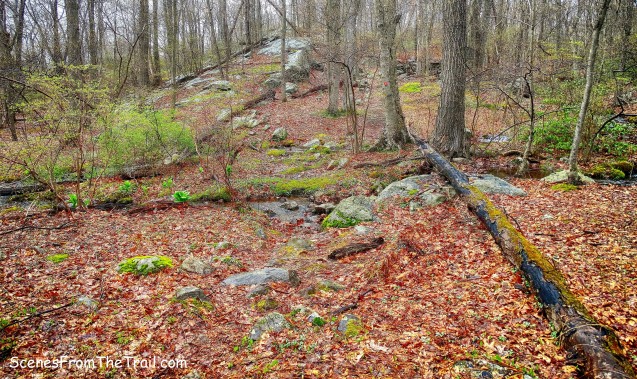 We crossed another stream on rocks. I lost count of how many streams we crossed on this trail. None were difficult (I carry spare socks just in case) and they made the hike more interesting.

This stream had a nice little cascade right where we crossed.

We then passed through an area that had a large number of stone walls. These stone walls are a little different that what I am used to seeing. These walls are covered with lichen and have a palish appearance.

Hard to imagine that along this rugged area, many made their living farming the land.

As we proceeded on the Catfish Loop Trail it was now lined with moss.

The moss lined trail really accentuates how attractive these woods are. 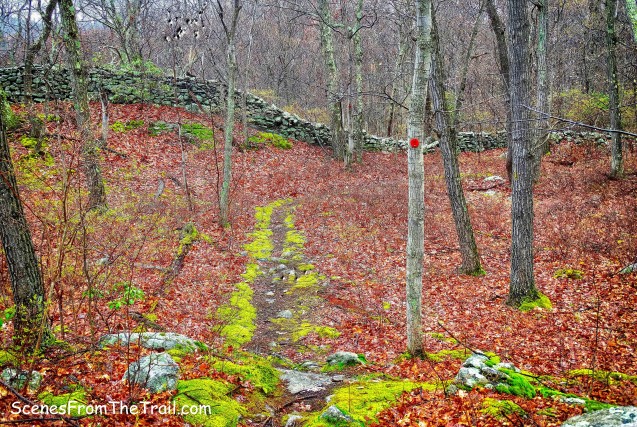 The peacefulness of the woods was a welcome respite from everyday life, despite being waterlogged from the rain. At least my feet stayed dry as we made another stream crossing.

We passed through a wet area that was teeming with green, a sign that Spring is indeed here.

Of course there is another stream crossing, this one the most attractive of the bunch. 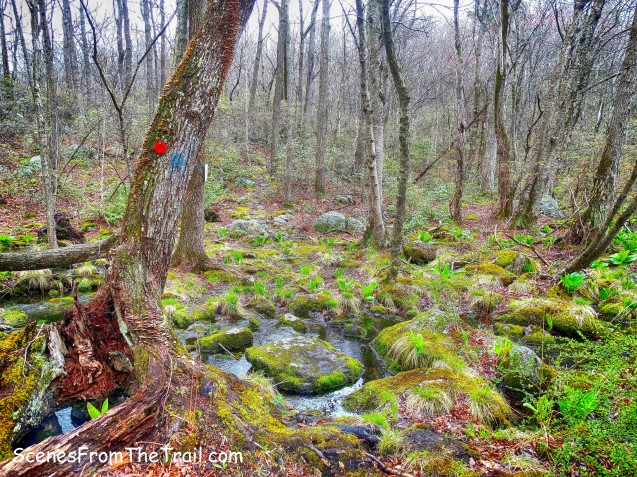 A couple of times during the hike, the trail skirts the park boundary which is posted with signs. We stayed on the trail, respecting private property. 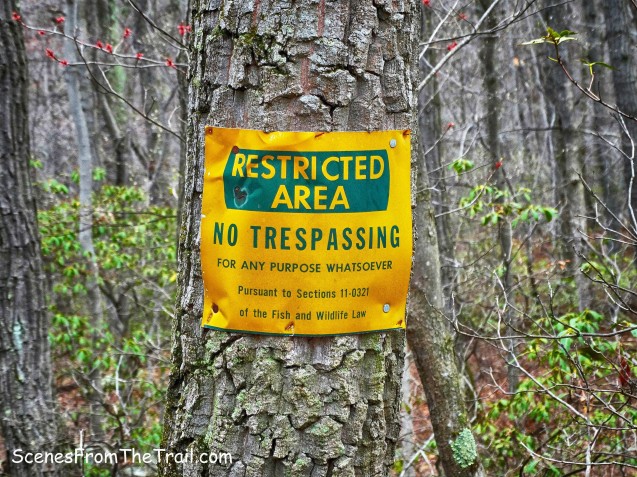 As we continued along the trail the rain drops ceased for a bit and I began to dry out. The overzealous trail keeper must have run out of the shiny new red discs because the second half of the hike was marked with old and faded blazes and weren’t as frequent, but the trail is still easy to follow. There are some blue and green blazes painted on some trees, but we just disregarded them and kept following red. 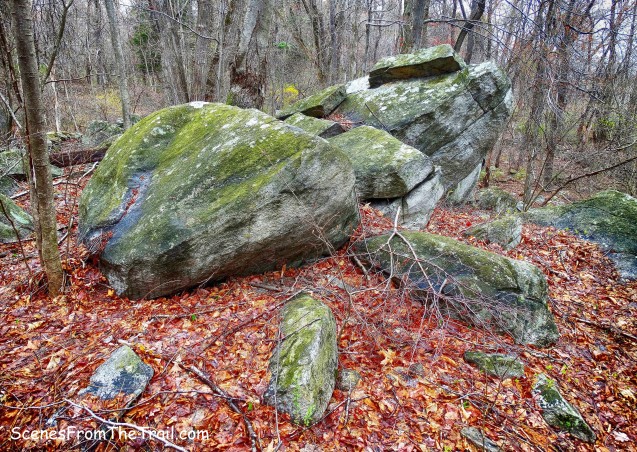 The Catfish Loop Trail goes over another stone wall as we arrived at the end of the loop.

end of the loop

We turned left onto the white-blazed Appalachian Trail and walked back up the hill, crossing Dennytown Road to the parking area, where our hike began.

Upon arriving at the parking area in the morning, we noticed the ruins of a stone building just off the road. We decided to take a look at it after completing the hike. The back of the East Hudson Trails map states that this stone building was built in the 1920’s or 1930’s by an amateur stone mason.

It also says that although it may be mistaken for a chapel, it served as a chicken coop.

This had to be the most extravagant chicken coop in history.

Exploring this glorified chicken coop was a nice way to end the hike. 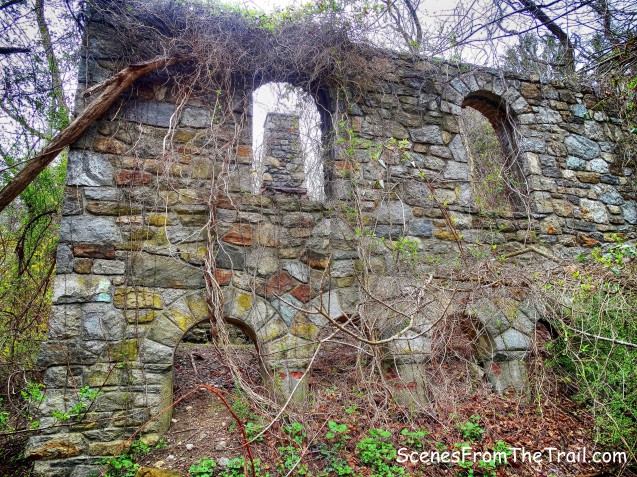 Speaking of chicken, it was time to take off and find a spot to light the grill.

This hike turned out to be much better than I expected. The trail was scenic throughout and the solitude was ideal. We only saw a young couple with an unleashed dog going in the opposite direction. Even though the dog growled at me, it was a good day on the trail. I hope that you enjoyed the hike and please don’t forget to follow my blog. Until next time folks, now get out there and take a hike!

Cons: Not many views, last part of the hike is uphill. 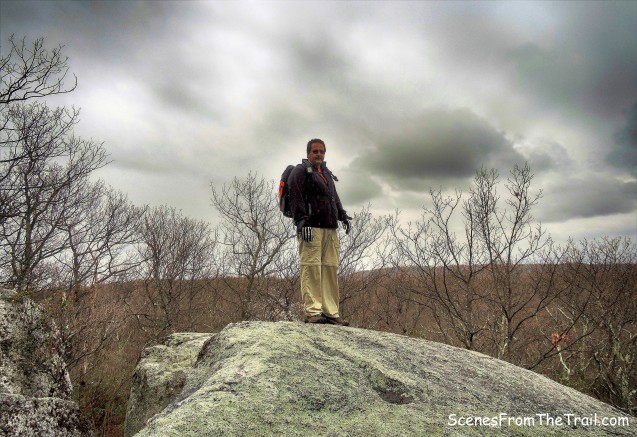