The public has long been allowed to enjoy the Rockefellers’ 55 miles of carriage roads, which also function as hiking trails, and the opportunity to experience Rockefeller country grew with the creation of the Rockefeller State Park Preserve. Its 1,400 acres are used for hiking, horseback riding and running. A good winter hike in the preserve is along the Eagle Hill Trail, a steep ascent that offers panoramic views of the Hudson River, farmland and Kykuit.

Growing up in North Tarrytown (now Sleepy Hollow) we knew this area as Eagle Mountain. As a kid we spent many a day wandering around the Rockefeller property, long before it became a preserve. It was the only “mountain” within walking distance of Beekman Avenue. The official name is Eagle Hill and at an elevation of just over 300 feet, it is more of a hill than a mountain. For a while, the U.S. defined a mountain as being 1,000 feet or more tall. Any similar landform lower than this height was considered a hill, but even this was abandoned in the early 1970’s. The United States Geological Survey (USGS), however, has concluded that these terms do not in fact have technical definitions in the U.S, but a hill is universally considered to be less tall and less steep than a mountain.

With that out of the way, let’s get to the hike. With the amount of snow that had accumulated from earlier in the week, I knew that most trails would be difficult to hike without snowshoes. Since I don’t own a pair, I am relegated to using microspikes which are great for icy conditions, but not much help in deep snow. From my experience the trails which are mostly carriage roads, are very well maintained at Rockefeller’s. It is also a short drive from where I live so off we went.

Arriving at approximately 9am at the parking area, which is right off of Route 117, there were only several cars in the large lot. Weather for the day was cloudy with temps in the high teens to low 20’s and wind about 10 mph. I already had a trail map, but it was slightly tattered so we picked up some spares at the visitor center, which was open on this Saturday morning. Once geared up, we headed to the trailhead at the southeast end of the parking lot and began our hike on the Old Sleepy Hollow Road Trail.

We began walking down the trail which was snow covered, but since it was so cold we didn’t sink in much. I tried to walk on the snowshoe tracks which had compacted the snow and made it much easier. 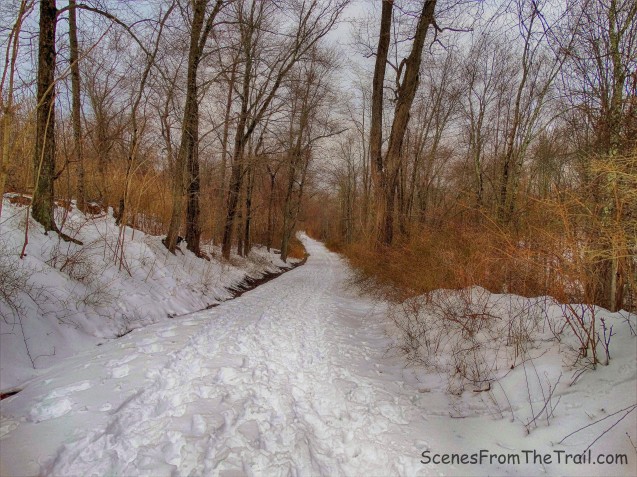 After about 1/3 of a mile, we made a right onto Nature’s Way. This trail can also be accessed from the parking area. 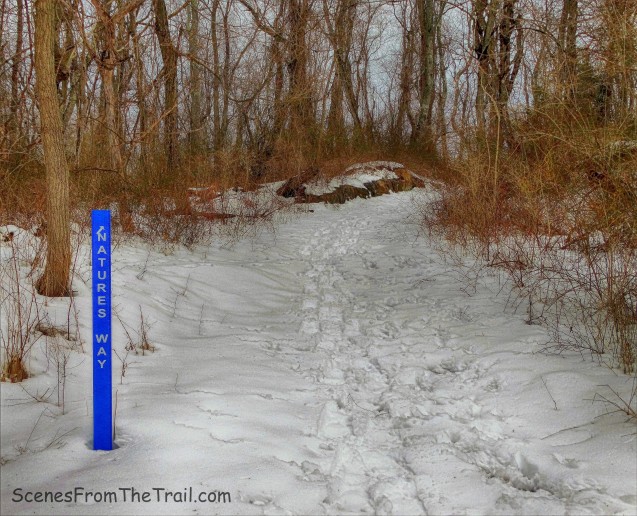 We walked up the hill briefly and then turned left on the Glacial Erratic Trail. This 100 yard trail was created by Dobbs Ferry Eagle Scouts in 1987 using hand tools. 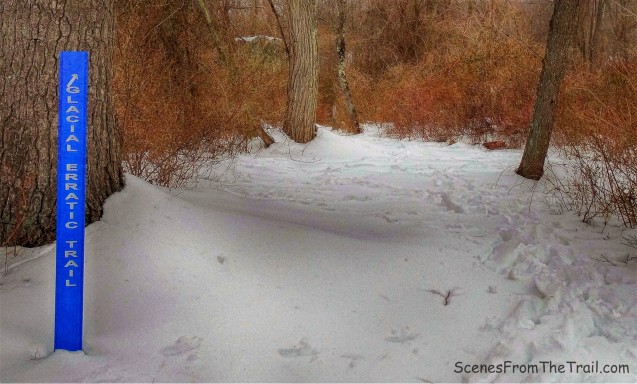 We walked through the snow towards our destination, a massive boulder. At almost 20 feet high and 65 feet in circumference, it is probably the largest glacial erratic to be found anywhere in Westchester County. 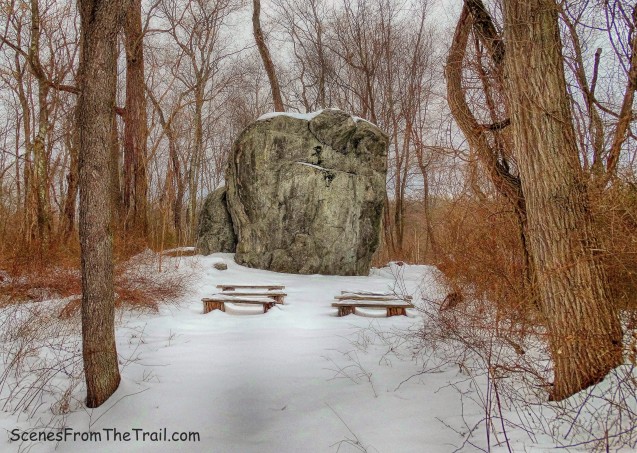 There is a good article about its discovery in 1987 in the New York Times. It is 600 million years old and was carried and dropped here by the Late Wisconsin continental glacier from some mountaintop in the Hudson Highlands. We brushed some snow off the benches and took a brief rest here. 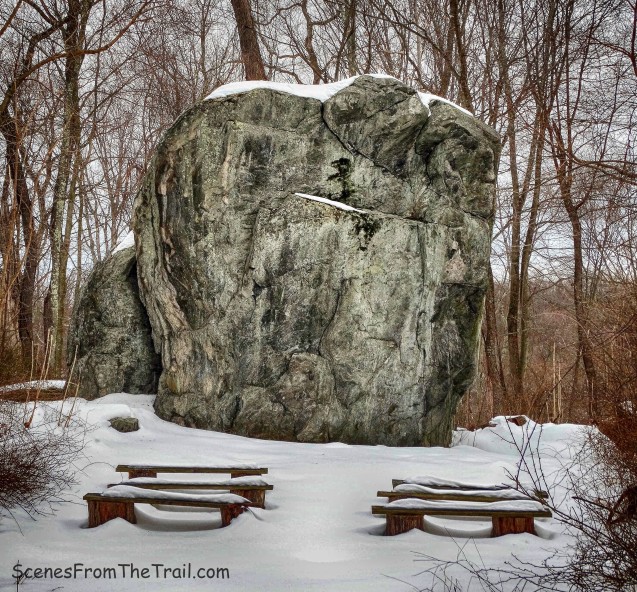 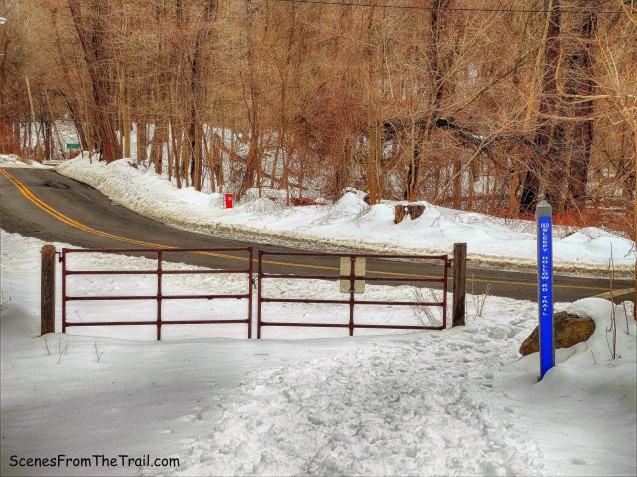 We picked up the trail on the other side of the road and followed it to a steel bridge that crosses over the Pocantico River. 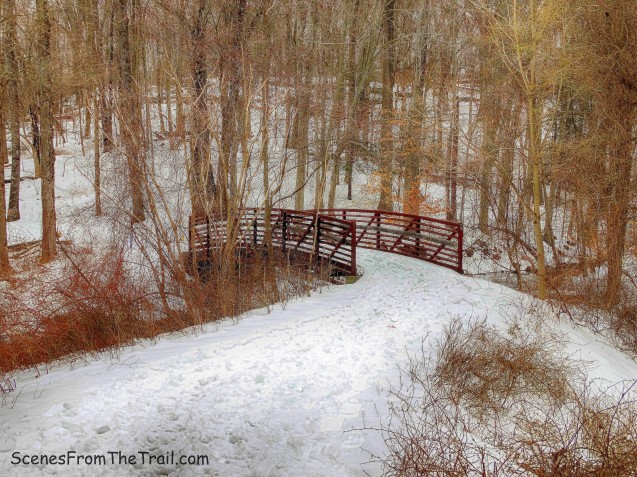 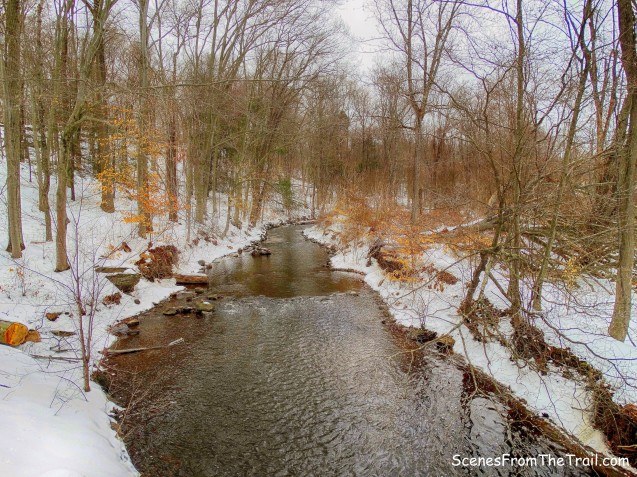 We turned left after crossing the bridge and almost immediately made a right onto the Eagle Hill Trail. The trail began to ascend and walking in the snow, it made for a nice workout. As we neared the summit, the trail split. We stayed to our left, but the trail loops back around so it doesn’t matter which way you go. 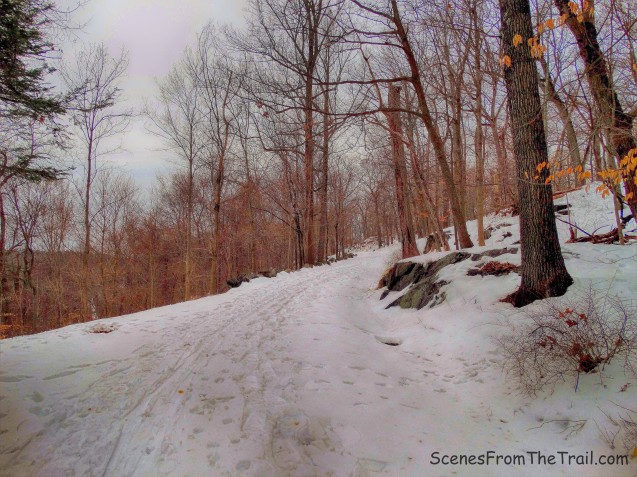 We arrived at the summit of Eagle Hill and were greeted with some decent views. To the southeast Kykuit, also known as the John D. Rockefeller Estate, is perched proudly on the hill.

To the south, both the old and new Tappan Zee Bridges can be seen spanning the Hudson River.

Looking west, Nyack and the The Palisades can be seen across the Hudson River.

We sat upon a stone bench and drank some hot chocolate as we relaxed at the summit of Eagle Mountain (sounds better than hill) as we enjoyed the view. After a short while, we started to get a bit chilly and decided to continue on our hike. As we began to descend, I notice that the snow was deeper in this area and was softer as the temperature rose a few degrees. That meant more effort was needed as we postholed down the trail. We continued down Eagle Hill Trail to its terminus and turned left, then a quick right to cross back over the steel bridge on the Old Sleepy Hollow Road Trail. 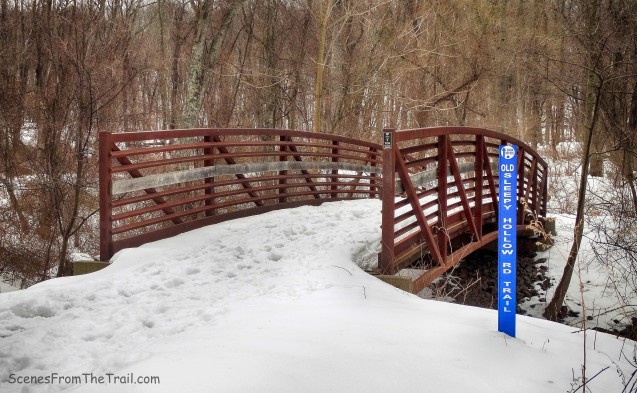 After crossing Sleepy Hollow Road, we walked uphill towards the parking lot. Upon arriving near where we had parked, the area was teeming with wildlife. Someone had laid birdseed all around and it was feeding time. A pair of deer were hanging out as I approached the vehicle. 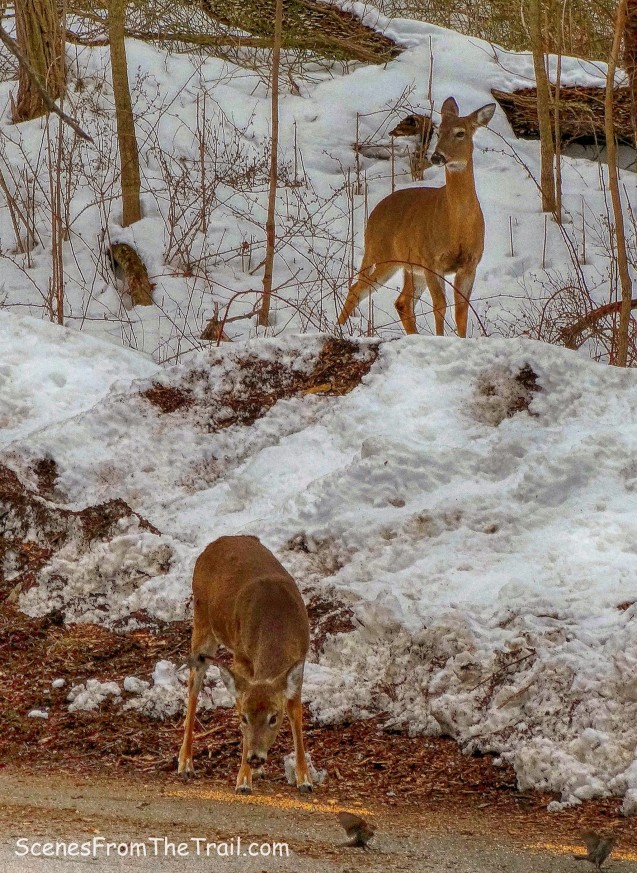 A Wild Turkey was also on the scene before being scared away by someone’s dog. 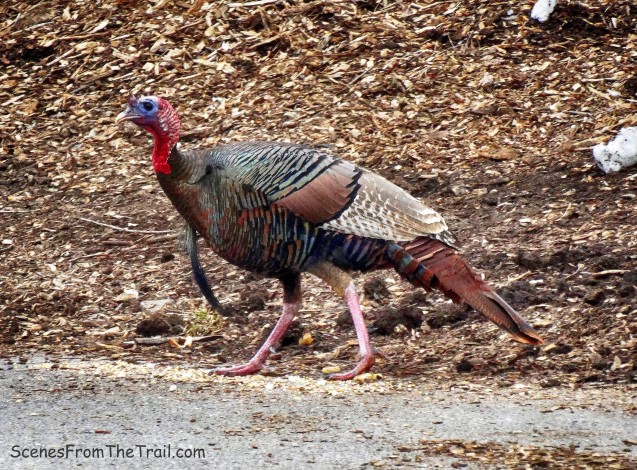 Although it was only a 3 mile hike, we were tired. Hiking in the snow takes more effort and I took that into consideration as I planned this hike. Once back at the homestead, we dug into some Corned Beef and Cabbage that was waiting for us in the slow cooker. After all St. Patrick’s Day was the previous day so we planned our menu accordingly. I hope that you enjoyed the hike and please don’t forget to follow my blog and stay up to date on my journeys through the woods. Now get out there and take a hike! 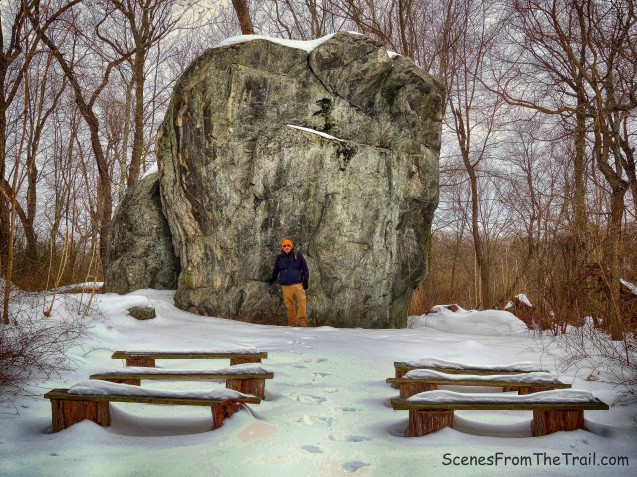