Lovers Leap State Park is 127 acres and sits at an elevation of 518 feet. Its 4 miles or so of trails through the park will lead the hiker through centuries of land-use history. Heading northeast from the parking lot, the trail utilizes the 1895 Berlin Iron Bridge, one of five remaining in Connecticut, to cross the Housatonic River. Across the bridge the Lovers Leap Trail heads southeast to the rock formation that gives the park its name. From here, legend has it, that the Pootatuck Indian Chief Waramaug’s daughter, Princess Lillinonah, and her lover plunged to their deaths. The Chief himself died in 1735.

I have driven past this park several times on my way to other hikes in the area. What always caught my eye is the Iron bridge and on several occasions, I have stopped to capture an image of it.

We were supposed to hike this park last winter, but never got around to it. I love to hike areas that are rich in history that still have remnants of what made it historical. After a grueling hike two days earlier, Lemon Squeezer and Boston Mine – Harriman State Park, I figured we would do an easy hike that contained some interesting features. This hike fit the bill and off we went. The weather for this Sunday morning hike was to be in the mid 40’s and cloudy. It pretty much stayed that way, although it felt a little colder. As luck would have it, the sun made an appearance on the drive home. The map, downloaded and printed from the parks website, could be better. The trails were blazed well enough, but the map does not reflect that. The map shows all trails as a brown line, which at times made it hard to follow. Nevertheless, the park is small enough to figure out which way to go. Most trails are loops, so following one color will likely lead you back to where you started.

Once parked and geared up, we began our hike. We started off by heading towards the Lovers Leap Bridge. Built in 1895 by the Berlin Iron Bridge Company, it is a single span, 173 feet in length and rests on coursed stone abutments. This was one of the last bridges manufactured by the company.

A few years ago someone stole one of the steel plates that covers the roadway and the bridge had to be closed. We stopped along the bridge to capture an image of the Housatonic River as we looked southeast.

After crossing the bridge, we turned right and headed southeast on a park road, which is also known as the Lovers Leap Trail.

After about .3 miles uphill, we arrived at the spot where the park got its name. Lovers Leap is a nice scenic spot with an enjoyable view. It’s probably the nicest view in the park, but I could be wrong.

We retraced our steps back to the park road (Lovers Leap Trail) and headed up the red blazed trail bearing right. Not being familiar with the park or the trails, I used my best judgement along with help from the map. The red trail which is referred to as the “Castle Loop” leads uphill and in a short distance we arrived at the castle ruins. Not much is left except a foundation and a tall chimney. This area is the former estate of Catherine Judson Hurd, who donated her Falls Mountain Estate to the state of Connecticut in 1971 to create the park.

Directly across the trail from the chimney, there was a castle-like turret. 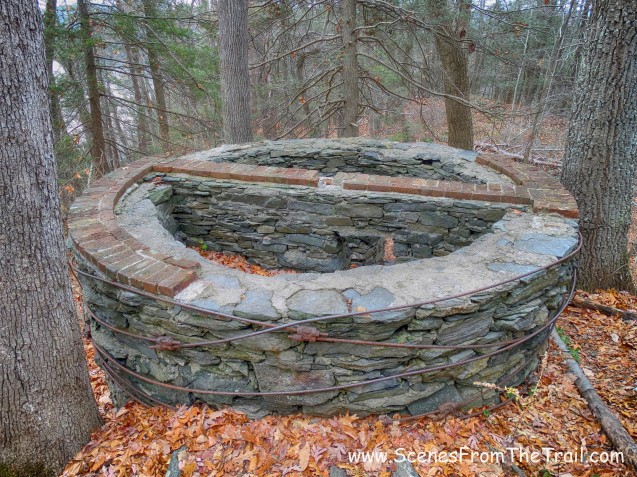 From here we continued to follow the red blazes, but they led downhill. We back tracked to the castle and followed the trail between the chimney and the turret. In a short distance we saw a blue blazed trail to the right and we began to follow the dark blue blazes as they climbed steeply up the hill. On the map it is shown as the Falls Mountain Trail. At the top of the ridge there was an open area with an eastern view.

There was a blue blaze painted on a tree near the edge of the cliff that someone must have painted as a joke. It could prove dangerous if you’re not paying attention. We continued to follow the blue blazes, but then bushwacked through the woods when the trail started to loop around and down. We didn’t see anything of interest and hiked back to the blue trail. We descended Falls Mountain until we came to the point where we first hopped on the blue trail. There we turned right and followed the old woods road to some ruins. From what I read these ruins are from a tea house that Catherine Judson Hurd had on her estate. There are two separate buildings here. One is larger than the other, so I assume that the larger one was the tea house and the smaller one a storage shed of sorts. The tea house is barely visible due to the extensive vines and weeds growing all over it, but the image below depicts the the most visible of the outer walls. 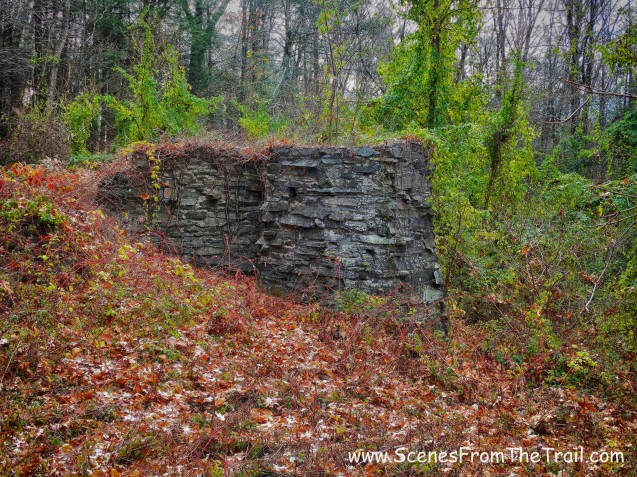 Below is the other building that stands close by. We took a nice long break sitting on these ruins and enjoyed a peaceful moment in the woods.

We hopped back on the trail, which I assume was the Castle Loop Trail as it looped us back to the Lovers Leap Trail (park road). From there we walked back down towards the bridge. 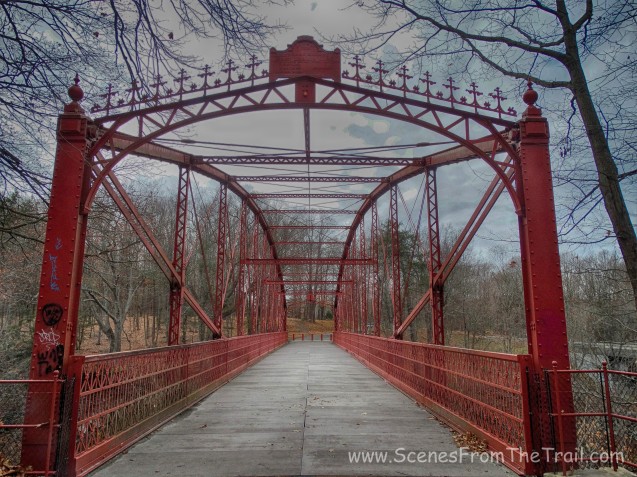 We crossed back over the bridge and walked back to the car. There we had some hot chocolate to warm up a bit then headed back on the trail. We now started following the light blue blazes of the Waramaug Trail. It is a 1.3-mile loop that goes along the top of the gorge through some pretty woods. We made sure to stay on blue because there are several trails that intersect and we wanted to walk along the ridge. We came to a spring house that overlooked the gorge. 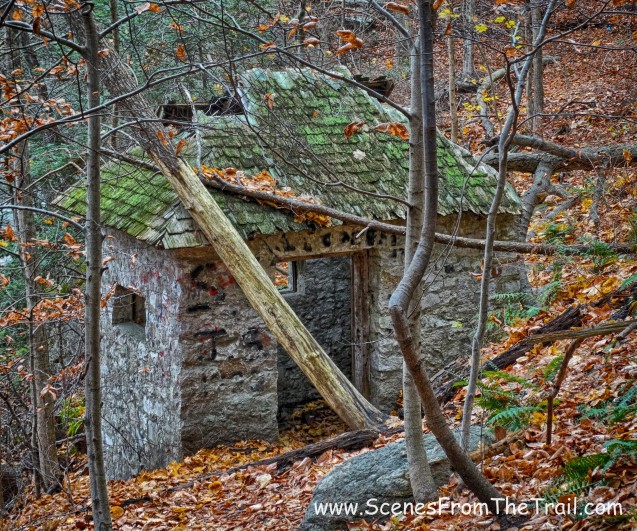 We continued up the trail as it led us to the top of the ridge.

Once at the top, there were some partial views of the river and surrounding landscape.

We continued walking along the ridge, high above the river and did not encounter another soul along the way.

We walked by an area that was charred by a recent fire. According to news reports, the fire occurred in July of 2016 and it is believed that fireworks were the cause.

The Waramaug Trail began to loop back along the edge of the park property and back to the parking lot. Although not exciting, it was a nice hike through the woods on a cool November day. After relaxing in the parking lot for a while, we took off. It was time for some bacon cheeseburgers and fries and I was ravenous. I hope that you enjoyed today’s hike and don’t forget to follow my blog in order to be notified when I publish a new post. Feel free to leave comments and/or share this page with your friends. One last thing, get out there and take a hike!