Sugarloaf Hill is a peak along the Hudson River in Putnam County, New York, part of the Hudson Highlands. It was named by the Dutch for its resemblance in outline to a sugarloaf when sailing up the river towards it. The hill is about 760 feet high at its summit, towards the middle of the ridge.

Beverley, the house of Col. Beverley Robinson, was built at the foot of the peak in 1758. Robinson, a Tory, lost his house and estates there to confiscation in 1777. It was used as a headquarters by several American generals during the Revolution, and Benedict Arnold chose to dwell there when he took command of West Point in 1780. It was at Beverley that Arnold learned of the capture of John André and the failure of his treason, and then fled to the HMS Vulture.

Castle Rock at an elevation of 620 feet is just North of Sugarloaf Hill. Castle Rock is also the name of the estate that sits on the hill, overlooking the Hudson River. Also known as Cat Rock and Osborn Castle, it was the estate of William H. Osborn the former president of the Illinois Central Railroad. The castle can be seen from New York State Route 9D and is one of the most recognizable man made landmarks of the Hudson Highlands.

This hike was hastily put together, not that it needed much planning. The fire at Harriman State Park the previous week, which was still smoldering, made me change my hiking plans. I have always wanted to get a close up view of the castle and had heard recently that it was vacant. From what I had heard the property is off limits to hikers and sightseers. With that being said, enter at your own risk. We arrived at the parking area for the Castle Rock Unique Area which is right on 9D. Even though we got a late start, and didn’t arrive until approximately 8:45 am, we were the first car in the lot. Upon returning back to the vehicle after the hike, the small lot was full and there were cars lined up on both sides of the entrance road. It was a warm day for late November and I went with short sleeves and a down vest. I also wore my convertible pants in case I felt like shorts later on. Once geared up, we headed out on the blue blazed trail that led us across a field. 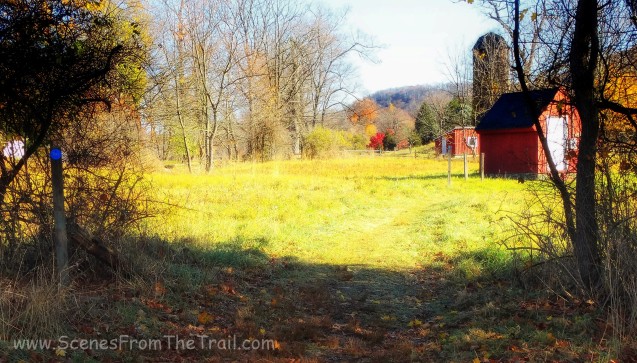 Walking across the field towards the woods, I could see the object of my desire. That castle which sat mightily on that hill, was calling my name. 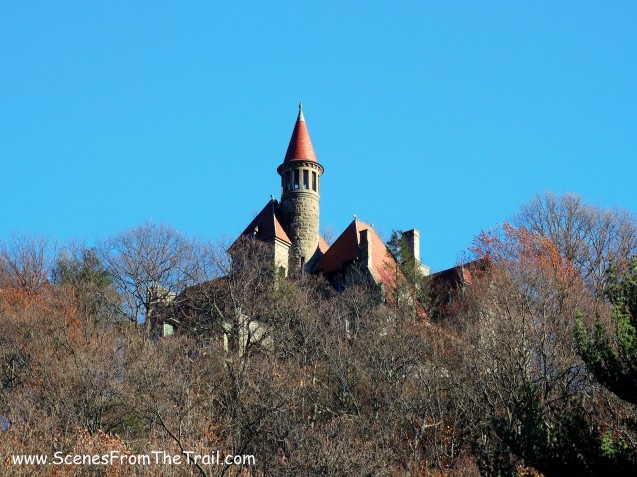 Once in the woods, the blue trail turned right onto a carriage road which ran parallel to the field we just crossed. Now heading south, we came to an open view of West Point, with Storm King Mountain just beyond on the left and Breakneck Ridge on the right. 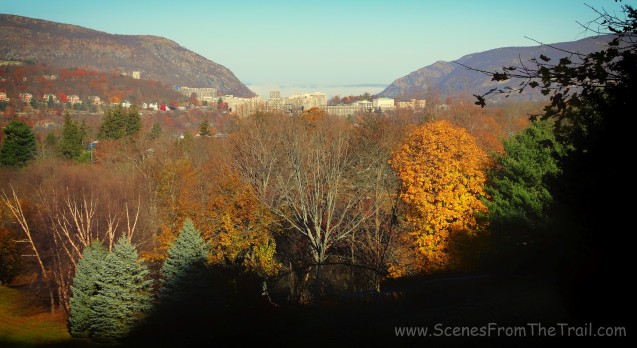 West Point, with Storm King Mountain just beyond on the left and Breakneck Ridge on the right

We began following the red blazes of the Sugarloaf Trail which ascended the hillside. The trail turned right, but there was an unmarked trail that went off to the left towards the castle. We went left and in a short distance we came to Old Stone Road. The signs were all over the place to stay off the property. As stated previously, enter at your own risk. 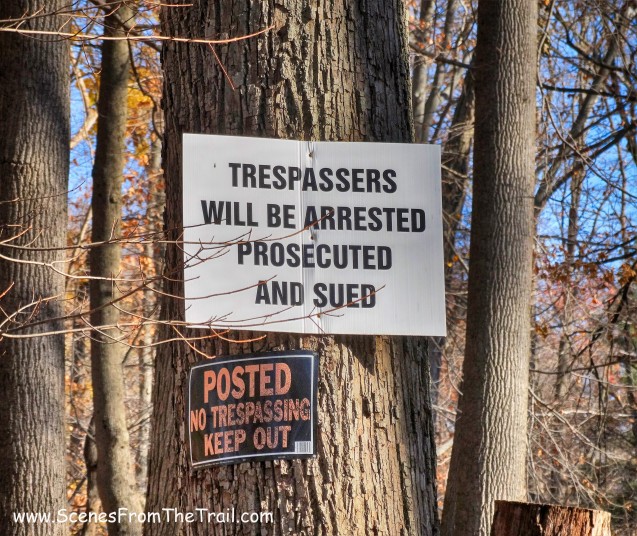 I’m not sure if this was meant to keep people away or that it was indeed factual. Nevertheless, it led to some apprehension. 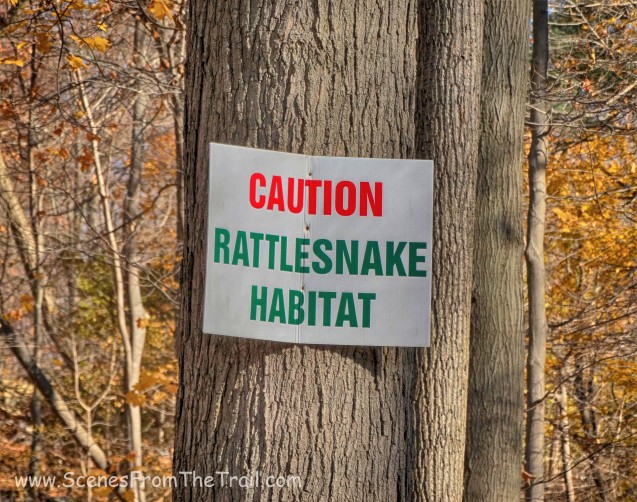 Below are some images of the castle and the grounds. 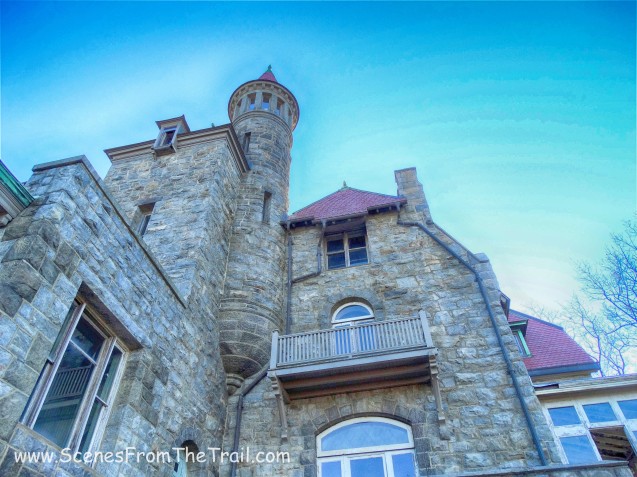 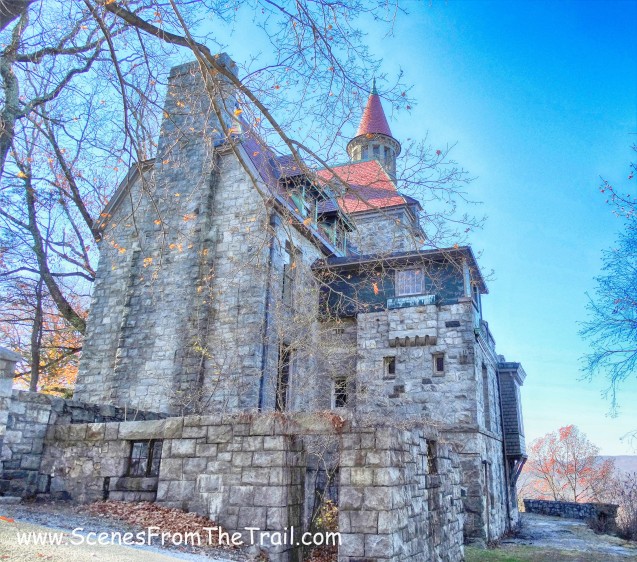 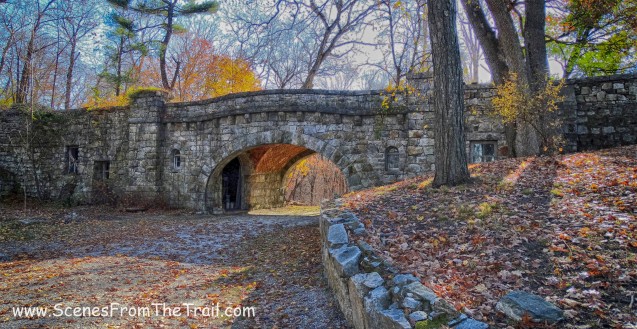 underneath the arch bridge 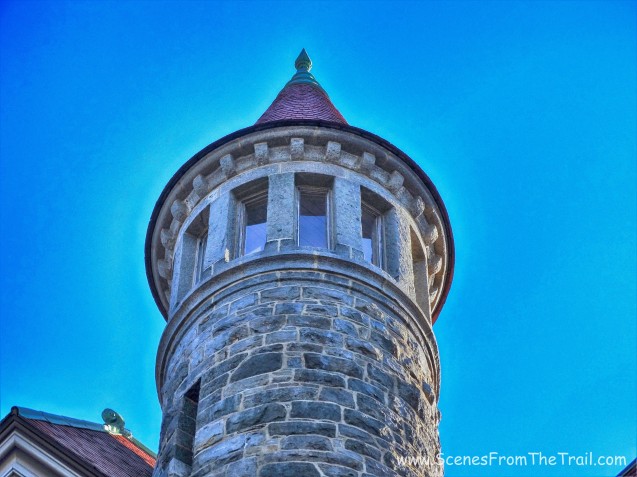 The view from the grounds of the castle. 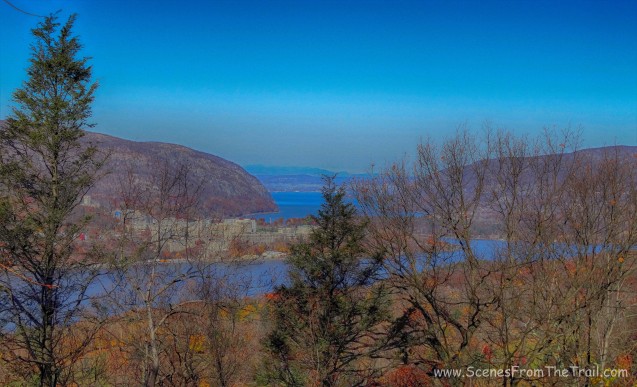 Once back on the red blazed Sugarloaf trail, we continued to climb the hill on switchbacks.

The map indicated that the red blazed Sugarloaf trail turned sharply right. We missed the turn and ended up walking a short distance on the blue blazed trail, where we came to another wooden gazebo. Here we took a break as I consulted my map. 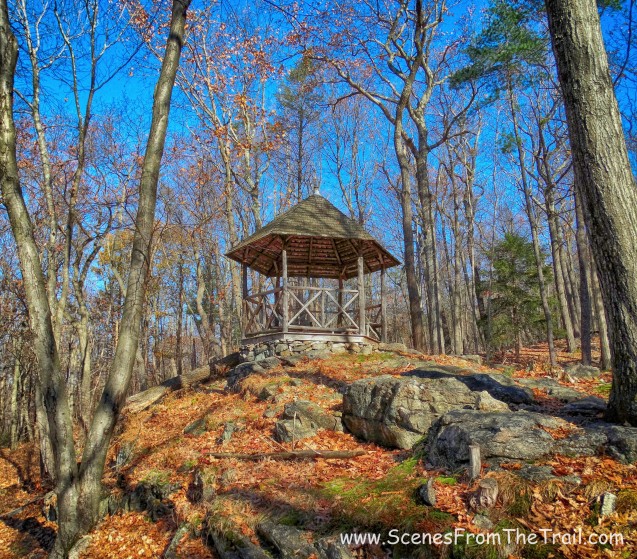 On the curve of the blue trail, right in front of the gazebo, was a guard rail of sorts. Seven stone pillars with pipes going through them, meant to prevent the carriages that used to roam this hill from going over the steep drop off. Just beyond the pillars, Sugarloaf Hill was visible through the trees.

After a brief rest, we walked back down the blue trail and turned onto the red blazed Sugarloaf Trail, which was now on our left. The blazes were evident in this direction. The trail now climbed very steeply towards the ridge of Sugarloaf Hill. This was by far the most strenuous section of the hike. It was short lived though as the trail leveled off and we walked along the ridge. Then we came to the end of the trail where we earned a nice view south, down the Hudson River. 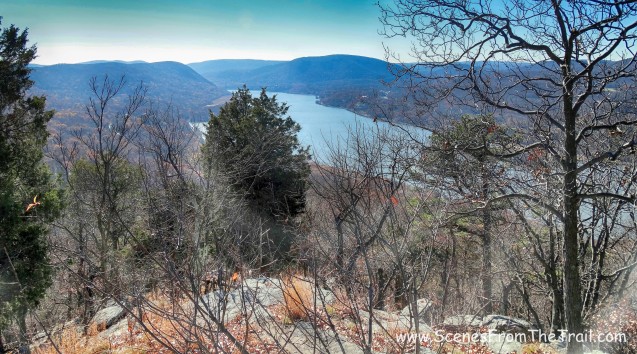 We spent quite some time there, taking in the view and enjoying the gorgeous day. We had some lunch and soaked in some rays. When it was time to go, I proposed that we do a loop hike, which would have added about a mile or so to our hike. No one seemed too enthused at my suggestion, so we retraced our steps back the way we came. Once we were back on level ground, we stopped and took a break at the first gazebo we saw at the beginning of our hike and relaxed for a long while. I also managed to capture an image of the view along the way. 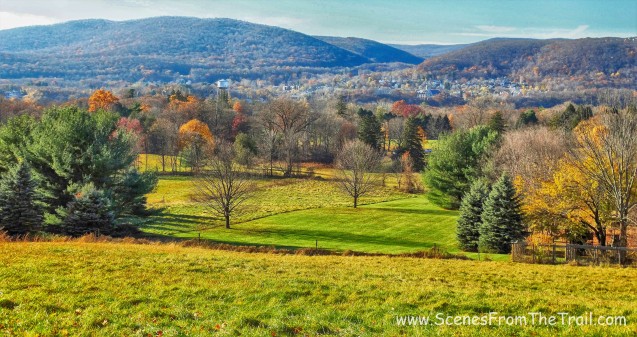 view from the Sugarloaf Trail

Once back at the vehicle, we headed out ready for some homemade Baked Ziti and an assortment of other goodies that awaited us. This was a pretty good hike, especially since it was almost last minute. The view, I’ve seen better, but a nice relaxing walk through the woods just the same. I hope that you enjoyed the hike today. Don’t forget to follow my blog so that you don’t miss out on any of my journeys. Remember, don’t just sit there, take a hike!