Woodlawn Cemetery is one of the largest cemeteries in New York City and is a designated National Historic Landmark. Woodlawn opened in 1863, in what was then southern Westchester County, in an area that would be annexed to New York City in 1874. The Cemetery covers more than 400 acres and is the resting place for more than 300,000 people. Built on rolling hills, its tree-lined roads lead to some unique memorials, some designed by famous American architects. Along with being a historic cemetery, Woodlawn is also a very scenic locale. Since it is the Fall foliage season and the weekend before Halloween, we decided to do our hike here. The prior weekend we hiked to the Mount Beacon Fire Tower and now we moved further south.

We arrived at approximately 9:30am on a Saturday morning and picked up a map at the office. I tried to find a map online prior to hike day in order to map out the hike, but could not find one that was suitable. The map provided by Woodlawn is quite large, measuring 22″ x 17″, but the print is quite small and difficult to make out the points of interest. A magnifying glass would’ve come in handy for this purpose alone. I had been to Woodlawn previously and visited most of the notable gravesites. Since it was difficult to read the small print on the map, I figured we would just improvise. An impromptu hike was just fine by me.

After parking at the Woolworth Chapel lot, we began our hike. First off we headed towards the John Harbeck mausoleum. John Harbeck was a business magnate on Wall Street.
Commissioned by his wife, Kate, and designed by Thomas E. Blake, the mausoleum has a 90-foot steeple, bronze doors, Tiffany windows and a pipe organ. It is the tallest mausoleum in the cemetery

On a previous visit, I was lucky enough to capture the sun setting through the Tiffany windows. I decided to include it here.

Since we were just wandering and not following a specific route, we just looked for interesting things to photograph and headed towards it. Within viewing distance of the John Harbeck mausoleum, was the William Lamon Harkness mausoleum  with multiple columns that resembled a bank. This large Greek Revival mausoleum by Hunt & Hunt (1923), was fabricated by Batterson & Eisele of Barre granite. 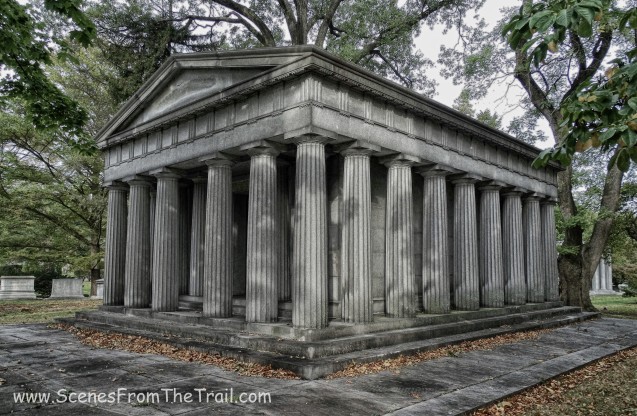 Close by was Herman Ossian Armour, co-founder of the meatpacking firm of Armour & Company. Canopied by large Weeping Birch trees it was almost hidden away.

We followed along the road at times and also walked along the tombstones. There were so many eye appealing sights along the way and that was our compass on this hike. Up on a hill was the mausoleum of Jay Gould the owner of Lyndhurst Estate in Tarrytown, NY. His mausoleum has no external markings. 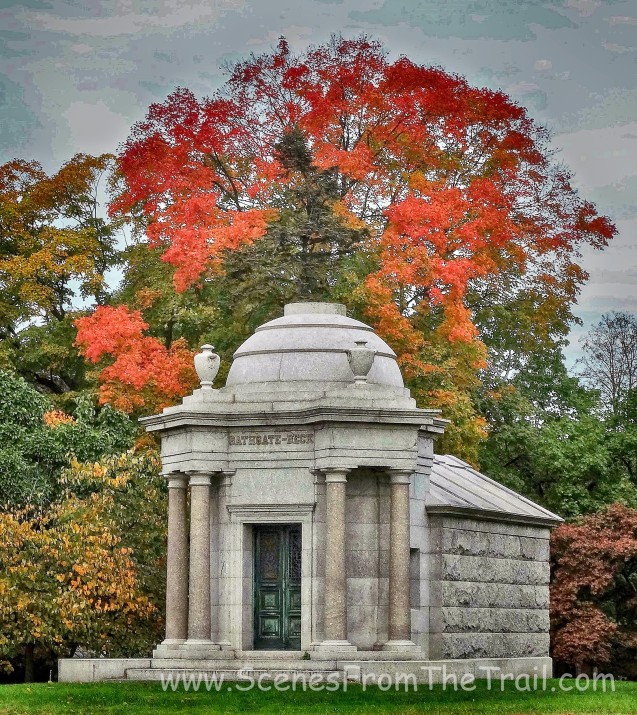 Dr. Clark W. Dunlop has a storied past and is entombed along with his pet parrot. 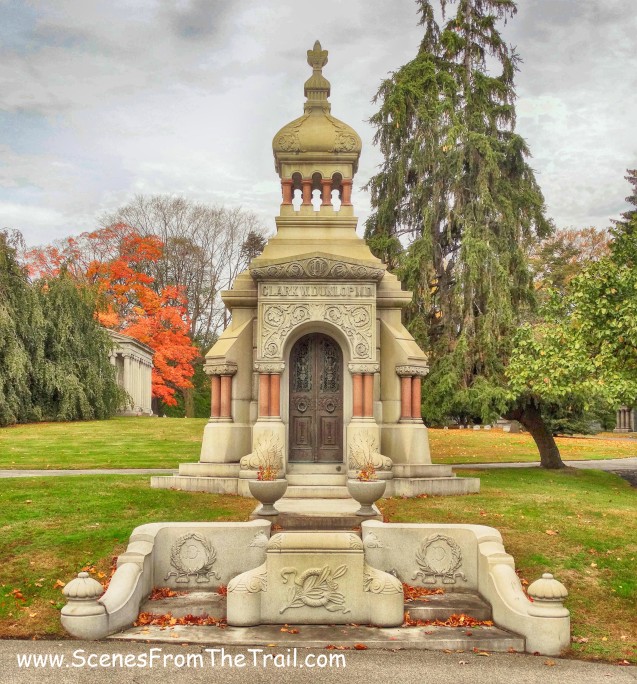 Henry H. Cook had large interests in railroads. His seasonal residence, Tanglewood, serves as the summer home for the Boston Pops. 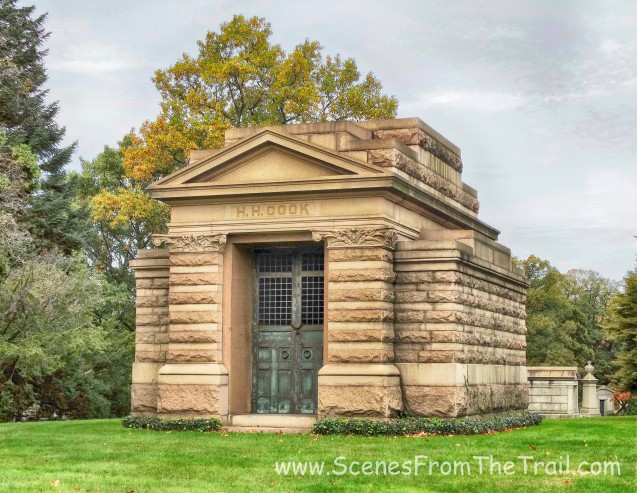 With such beautiful architecture all throughout this cemetery, our path was guided by the more eye-catching memorials, of which there were many.

As we wandered around, I saw that to my right, almost hidden from view was a very interesting looking memorial. It turns out it was the final resting place for Samuel Untermyer who was a prominent lawyer and civic leader.

Untermyer Park and Gardens is one of my favorite places and his gravesite was a good place to have lunch.

Once we were done hanging out with Mr. Untermyer, we continued on our hike. We came to the monument for the William Bradley family. William Bradley built most of New York City’s subways, but was almost penniless at the time of his death. 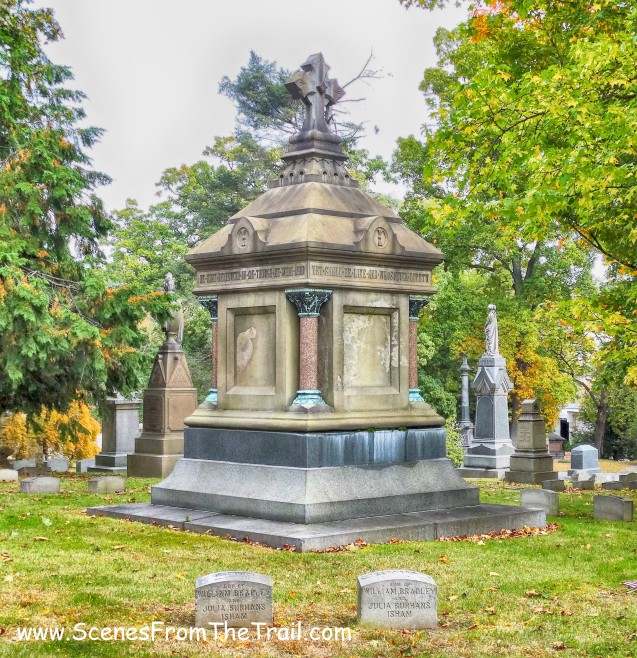 The cemetery is full of old-growth trees that are quite photogenic. 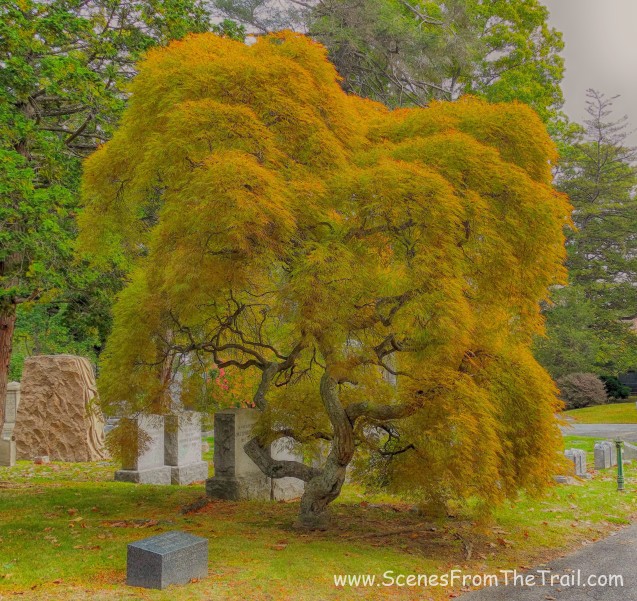 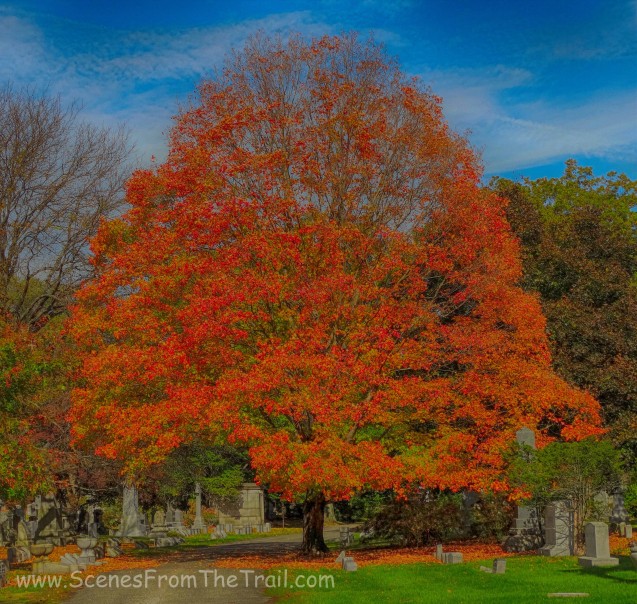 This is a nice place to take an autumn walk if you’re looking for a little peace and quiet.

With all the beautiful stonework and ironwork spread out across this serene location, I pointed my camera in just about every direction capturing images. 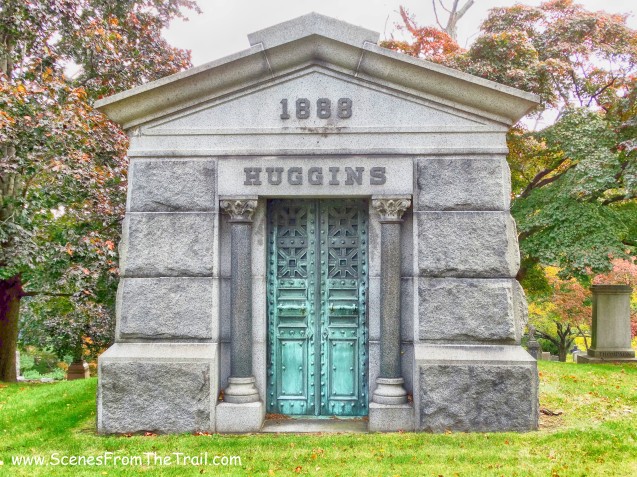 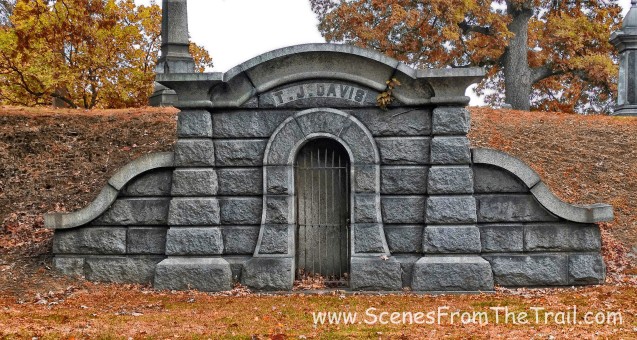 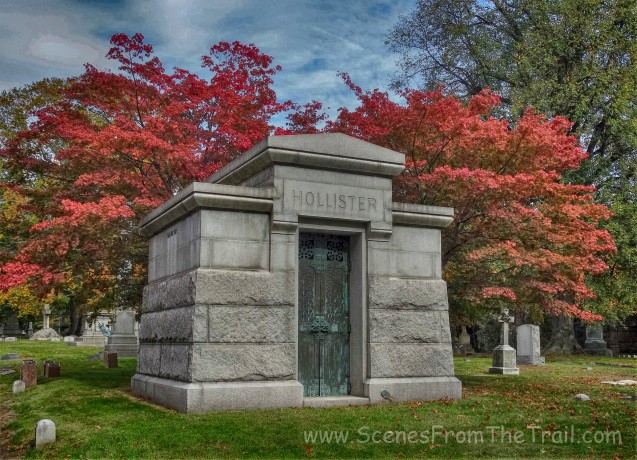 We walked over a stone bridge that spanned a small lake. 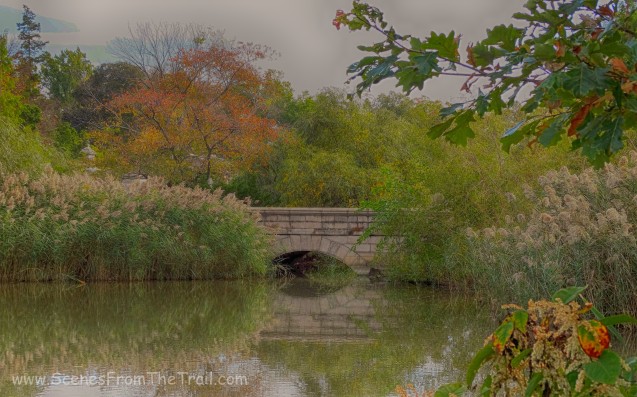 We continued hiking through Woodlawn trying to tally up some mileage. I captured so many images, but I couldn’t post them all. My suggestion is that you check it out for yourself. So get out there and take a hike!